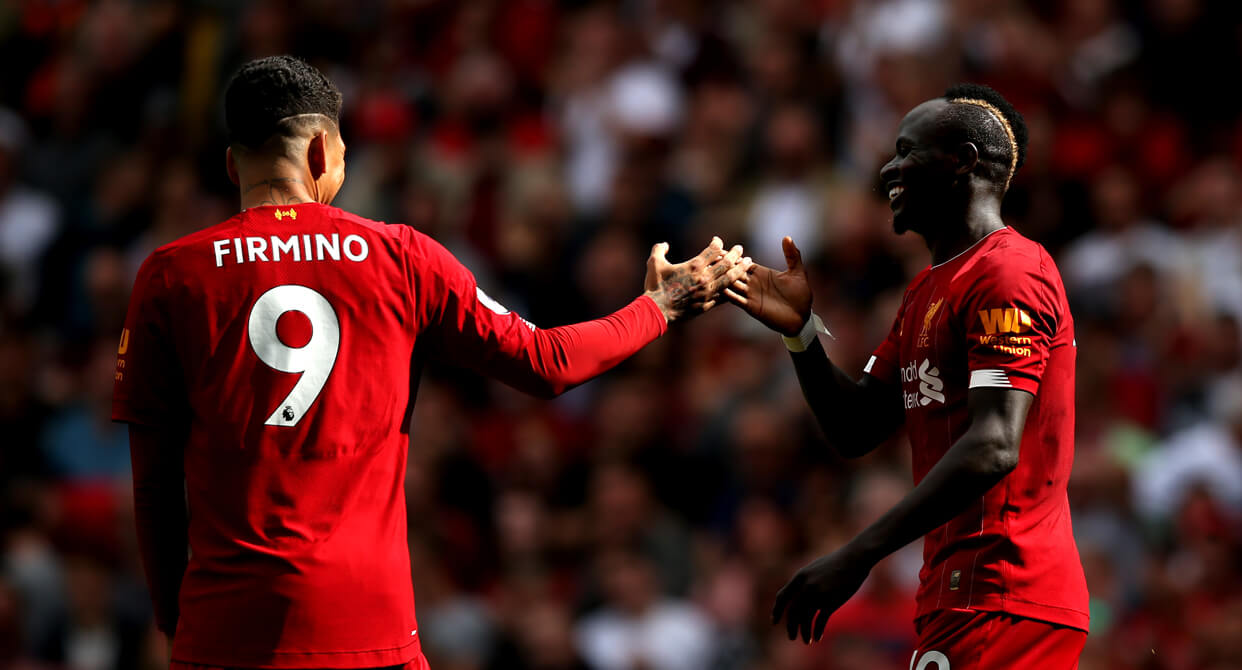 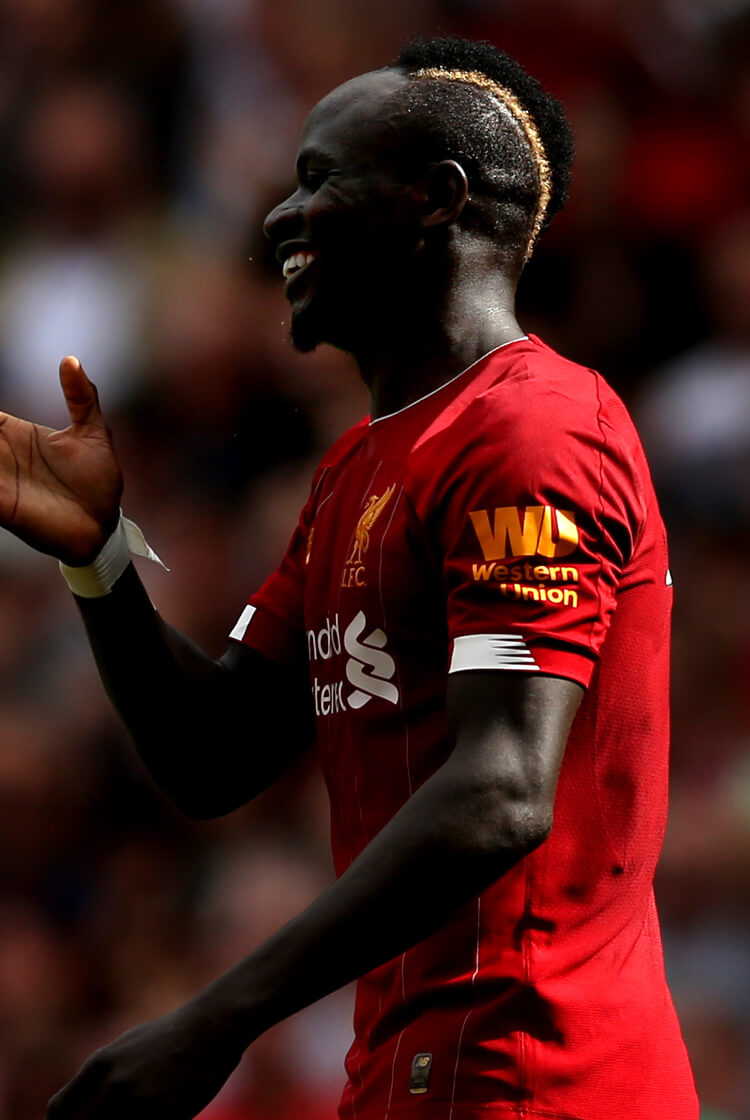 Manchester City’s subsequent defeat at Norwich ensured that an ultimately comfortable home win over Newcastle helped Liverpool to a five-point lead at the top of the Premier League. A stunning early strike from Jetro Willems gave the visitors to Anfield a surprise lead, but Sadio Mané hit an equally spectacular equalising goal just before the half-hour mark. Jürgen Klopp was forced to withdraw the injured Divock Origi moments later, but his replacement Roberto Firmino created a second for Mané before half-time and then played a sublime flick for Mo Salah to slide home Liverpool’s third, and secure the victory midway through the second half. 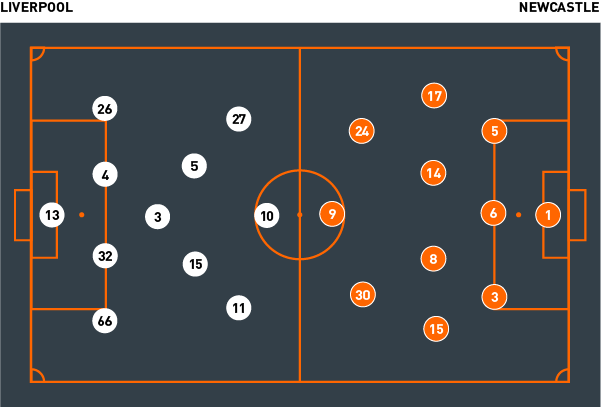 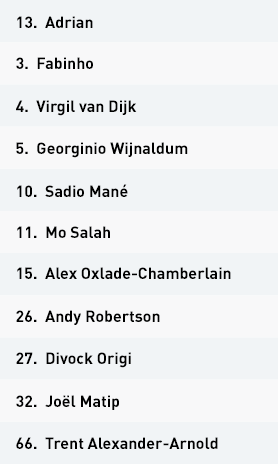 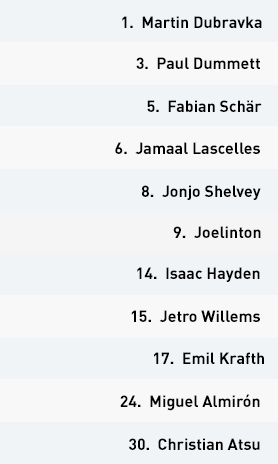 Jürgen Klopp set Liverpool up in a 4-3-3 formation, with Fabinho, Alex Oxlade-Chamberlain and Georginio Wijnaldum as the three midfielders behind Mo Salah, Sadio Mané and Divock Origi. They endured a difficult start to the game and really struggled to break through a very compact Newcastle block.

The three Liverpool attackers looked to stretch the Newcastle defensive line and pin the back five in order to create space for the advancing runs of Oxlade-Chamberlain and Wijnaldum. The issue with this, however, was that the Newcastle midfield had no intention of engaging the Liverpool defenders, who were bringing the ball out from the back. Instead, they looked to deal with Liverpool’s midfield movements, which meant they dropped closer to their own defensive line and reduced the space in which Liverpool could operate. The hosts could thus only operate in front of the Newcastle block and out wide, resulting in a stream of crosses that the visitors dealt with easily.

Mané moved out to the left, with Origi moving centrally, and the switch paid off as the Senegal captain received from left-back Andy Robertson, cut inside and curled home a superb equalising goal. Roberto Firmino was introduced for the injured Origi soon after, and took up his usual position at the centre of Liverpool’s attack. The Brazilian’s customary dropping movements into midfield made the Liverpool forward line much more fluid and caused the Newcastle defence more problems.

With space beginning to appear more between the Newcastle lines, and less in behind their defence, Liverpool looked to play the ball into the feet of their forwards with shorter passes from higher positions, as opposed to passes from deeper areas. The tempo of their attacks quickened, which made it more difficult for Newcastle to press and cover space at the same time. With Liverpool now looking to utilise five points of attack – the front three plus two central midfielders or the full-backs – Newcastle's defence became man-oriented, which made them easier to manipulate with movement. Liverpool took full advantage of this and began dragging defenders around, creating pockets of space for quick combinations – most notably when Firmino and Salah combined brilliantly for their third goal.

Newcastle set up in a 5-4-1 shape out of possession, with Emil Krafth, Fabian Schär, Jamaal Lascelles, Paul Dummett and Jetro Willems forming the defensive line of five. Almirón, Hayden, Shelvey and Atsu created the midfield line behind sole striker Joelinton.

The visitors set up to restrict the space available to the potent Liverpool attack, and were happy to let them bring the ball out from the back. Joelinton seemed somewhat unsure on his role, applying mild pressure on Liverpool centre-backs Joël Matip and Virgil van Dijk and screening passes into Fabinho, but doing neither particularly well. Atsu and Almirón pressed the full-backs, while Shelvey and Hayden looked to affect Wijnaldum and Oxlade-Chamberlan. This allowed Newcastle to maintain their defensive line of five, with wing-backs Willems and Krafth able to mark and track Salah and Origi, and later Mane, while still having the cover of an outside central defender.

This became more difficult after the introduction of Firmino, which created problems that meant the Newcastle wing-backs had to press Liverpool's full-backs. The visitors tried to maintain their shape and limit spaces by tracking their opponents and then passing them on as they got closer to a teammate, but the speed of the combinations around them meant that even tracking players for a few yards ensured the space left behind could be exploited.

The other option was to allow Liverpool's players to roam freely and receive the ball to feet while maintaining restricted access to the space in behind. But allowing players of that quality to receive in these areas and turn would have had potentially dangerous consequences.

Steve Bruce set his Newcastle team up in a 3-4-3 formation in possession, with Miguel Almirón and Christian Atsu joining central striker Joelinton in attack, and wing-backs Emil Krafth and Jetro Willems pushing up to join Isaac Hayden and Jonjo Shelvey in midfield.

The visitors managed only 28 per cent possession and registered just one shot on target across the 90 minutes. The idea was to soak up the pressure and then look to utilise counter-attacks to create opportunities. Unfortunately for Newcastle, Liverpool’s counter-press was relentless and they managed to stifle the majority of opportunities in the earliest stages of transition.

Bruce's team also tried to play passes in behind as early as possible, to take advantage of Liverpool’s high defensive line, but the movement of the forward runners was often a little premature and this resulted in several offsides. The alternative to playing in behind early was to play direct passes and look for flick-ons and knockdowns from which to pick up the second ball. Joelinton was usually the target for these direct passes, with the Brazilian receiving back to goal and then looking to link the play – but opportunities for this came few and far between as Newcastle rarely threatened to add to Willems’ shock early strike.

Liverpool operated in their usual 4-3-3 shape out of possession, and looked to press Newcastle aggressively where possible. Sadio Mané, Divock Origi and Mo Salah pressed the three centre-backs, while Georginio Wijnaldum, Alex Oxlade-Chamberlain and Fabinho worked across the midfield to try to negate the threat of Shelvey and Hayden, but also to affect the Newcastle wing-backs if needed. The hosts' back four were then free to deal with the Newcastle trio in attack, with Virgil van Dijk and Joël Matip regularly facing direct play.

Due to Newcastle’s approach, Liverpool didn’t have much defending to do against established possession. Instead, the majority of their defending came in transition, where they implemented an intense counter-press. It has often been suggested that this approach lasts only for a few seconds before a team starts to drop off and defend in a more organised manner, but with Liverpool it continued in an unrelenting fashion as they looked to regain the ball as quickly as possible.

The workrate of Liverpool's individuals is a prominent feature of this defensive approach; one clear example was when Sadio Mané chased for 60 yards towards his own goal to help out Andy Robertson and Van Dijk with his side already 3-1 up. This defensive strategy was one of the key reasons Newcastle failed to build many meaningful attacks.