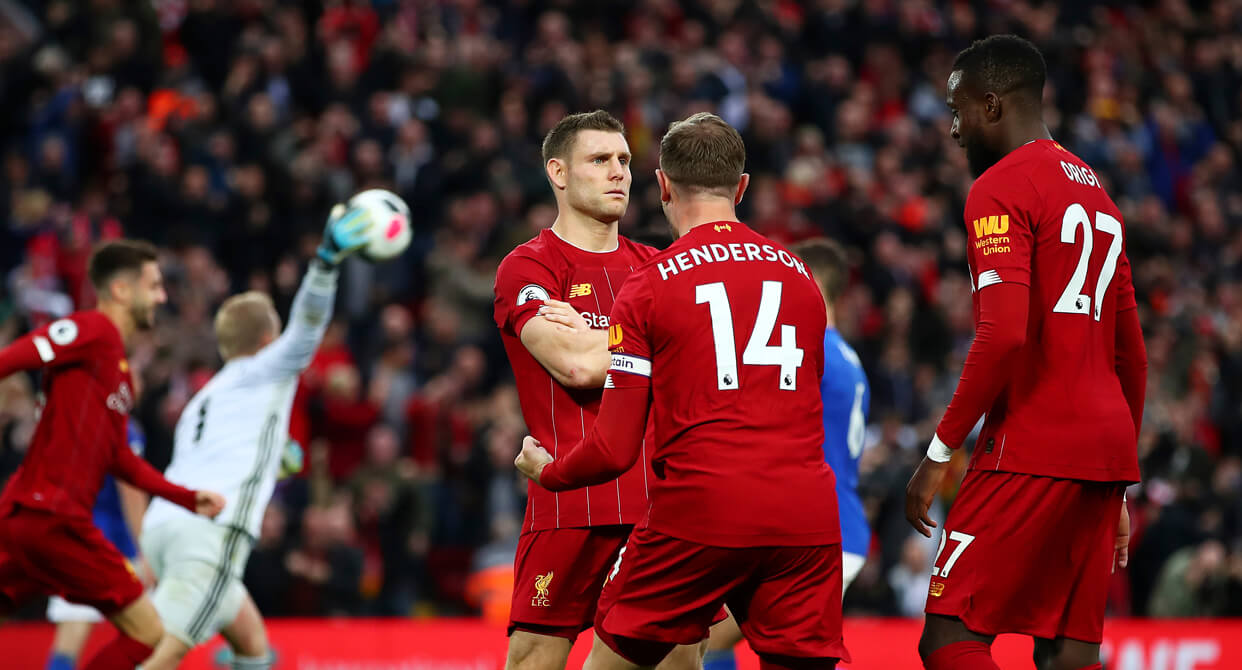 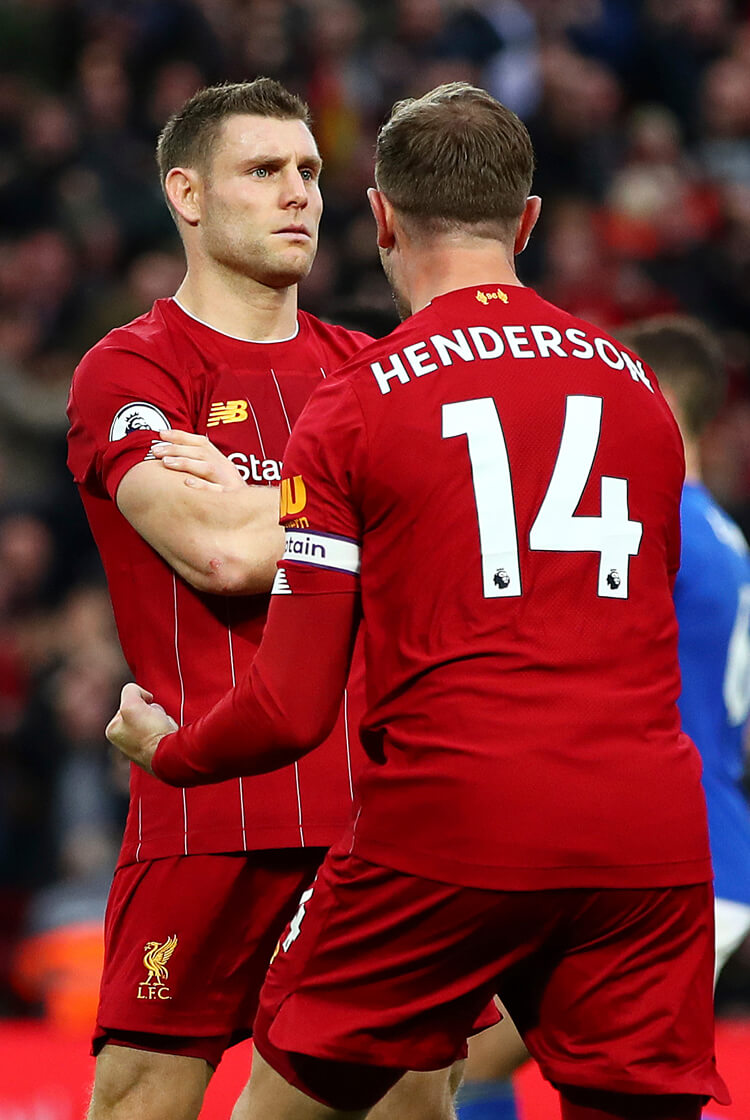 A controversial stoppage-time penalty from James Milner earned Jurgen Klopp and Liverpool their eighth consecutive win to start the new season, this time over former manager Brendan Rodgers and Leicester City. The hosts controlled the game for long spells and took a deserved lead through the in-form Sadio Mané late in the first half, but the visitors always carried a threat and looked likely to leave Anfield with a point for the second consecutive season when James Maddison finished confidently past Adrián with 10 minutes remaining. It was not to be, however, as referee Chris Kavanagh judged Marc Albrighton to have fouled Mané in the Leicester box with only seconds remaining. Milner stepped up to score from the spot and secure his team’s 17th straight Premier League win, extending their lead over second-placed Manchester City to eight points in the process. 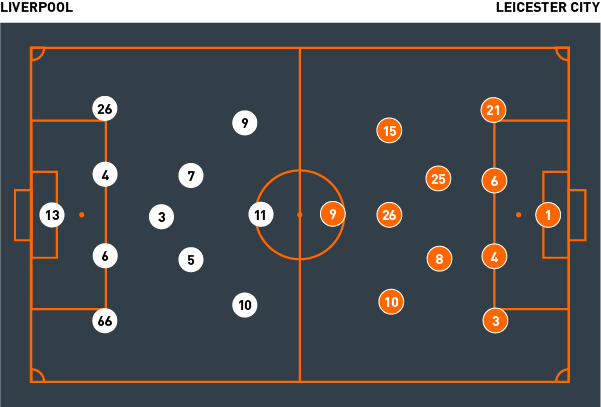 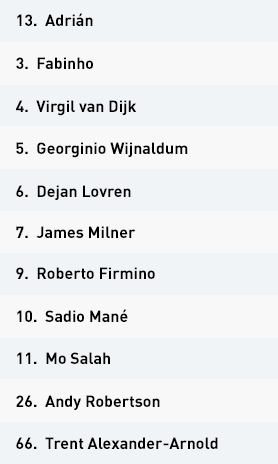 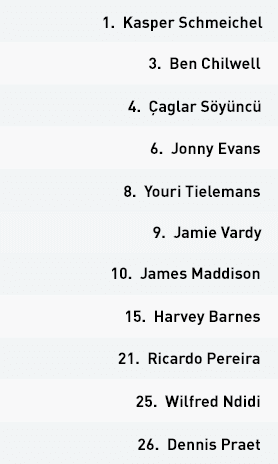 Jurgen Klopp set Liverpool up in their usual 4-3-3 structure, but started with Mo Salah as a central forward supported by Roberto Firmino on the left and Sadio Mané from the right. James Milner and Georginio Wijnaldum took up the advanced central-midfield roles ahead of Fabinho, with the latter’s wider movements during Liverpool’s deeper build helping to create key progression in the Leicester half. The hosts took advantage of the visitors’ lack of attacking balance, leaving right-back Trent Alexander-Arnold deeper to allow Wijnaldum to drift to the right and provide vertical passes forward. The Reds struggled to connect from attacking crosses, however, as their most penetrative play came from central positions and with a more sustained build-up.

Out of possession, the front three aggressively pressed the visitors’ back line, trying to shut off access into the full-backs. Milner often moved deeper to cover Harvey Barnes’ movements on the Leicester right, while Wijnaldum and Fabinho pushed higher on to the Foxes’ double pivot of Wilfred Ndidi and Youri Tielemans. With James Maddison moving inside from the left, Leicester’s main way out of Liverpool’s press was through the full-backs, but any aerial pass over the press simply resulted in Liverpool possession. Only when Leicester worked the ball into their full-backs’ feet did they make any sustained progress.

Firmino eventually moved into a deeper, central position, allowing Fabinho extra time in possession to link with various runners. Deft chipped passes proved useful in penetrating over Leicester’s deeper block, as the likes of Salah, Wijnaldum and Alexander-Arnold all received beyond the pressure. It was from Milner’s superb ball from deep that the Reds took the lead, however; the veteran midfielder bent it around Leicester’s central defence to send Mané free of Jonny Evans to slot home his 50th Premier League goal for Liverpool.


The hosts’ attacking play increased in tempo in the second half, as they transitioned to goal much quicker with vertical passing through a Leicester midfield whose wider players operated closer to the channels. Liverpool’s second-half attacks also benefitted from full-backs Alexander-Arnold and Andy Robertson playing higher but narrower, and looking to bend balls in behind for their rotating front line.

Firmino rotated across the front line, with Salah and Mané now offering their usual penetrative runs between the opposition centre-backs and full-backs. Alexander-Arnold and Robertson were able to look for them, with the Reds’ central midfield and defence covering any Leicester threat on the counter-attack. Despite the hosts often regaining possession and counter-attacking quickly, their quality in front of goal was uncharacteristically sloppy. That almost cost them, with Maddison striking low past Adrián for a late equaliser – but Mané drew a soft foul from substitute Marc Albrighton with time running out, and Milner showed the composure to slot home the winning penalty.

Leicester City began the match in a 4-2-3-1 formation and looked to hit the home side on the break with quick and direct balls into or beyond lone forward Jamie Vardy. When they managed to secure higher possession, usually from second balls after Liverpool’s defence won the first contact, James Maddison’s movements supported central and right-sided play. Although beginning from the left, Maddison’s roaming created extra shorter passing options with Harvey Barnes and Dennis Praet in and around the right inside channel, as Leicester tried to create shorter combinations to break through the Liverpool block.

With Maddison moving across the pitch, however, Liverpool were able to work their way out of any higher Leicester pressure on the right. Although Youri Tielemans tried to delay any balls until Maddison could get back across the pitch, the slickness of Liverpool’s build often worked to bypass the duo. The Foxes thus dropped into a more compact 4-5-1 structure that denied Liverpool space to play through or in behind.

Vardy’s lone running against Liverpool’s back line was relatively ineffective, as Virgil van Dijk and Dejan Lovren dealt comfortably with any aerial pass. But when Leicester managed to get the ball into the feet of their full-backs within the middle third, they were able to drive forward around Liverpool’s narrowly pressing 4-3-3 shape. From here, Vardy’s movements away from the back line helped connect into runners, as Barnes’ forward runs from the right occupied Van Dijk and Maddison’s roaming from the left interested Lovren. Vardy could now receive with little pressure and set into runners, or turn and drive on goal.

The Foxes had similar success when accessing left-back Ben Chilwell, as Tielemans provided similar wider movements to those Wijnaldum offered for Liverpool. Here Maddison became a key free player when drifting inside, with Liverpool’s central midfield struggling to pick him up and both Salah and Mané pressing higher. Much like the hosts, however, Leicester struggled to consistently create anything in front of goal and found themselves increasingly pressed back after falling behind.

Marc Albrighton replaced Barnes at the interval, as Leicester looked to attack with more defined width – although this left them more vulnerable to swift Liverpool counter-attacks if they lost possession. With both full-backs supporting Maddison and Albrighton on the flanks, they managed to create more two-on-one situations against the Liverpool full-backs – but the visitors’ desire to protect central areas against counters meant they rarely got numbers forward to support Vardy in the penalty area.

Liverpool’s own desire to protect the central areas meant Leicester continued to build in wide areas, both in possession and transition. As they committed more men forward in search of the equaliser, they were happy to leave Wilfred Ndidi and the two centre-backs alone to deal with the threat of Liverpool’s rotating but quieter-than-usual front three.

Maddison and substitute Ayoze Perez eventually moved inside to offer more central options around Vardy, and the two combined to produce an equaliser for Maddison late on. It wasn’t late enough, however, as Brendan Rodgers was left to rue the stoppage-time decision of referee Chris Kavanagh to award the penalty from which Milner won the game.