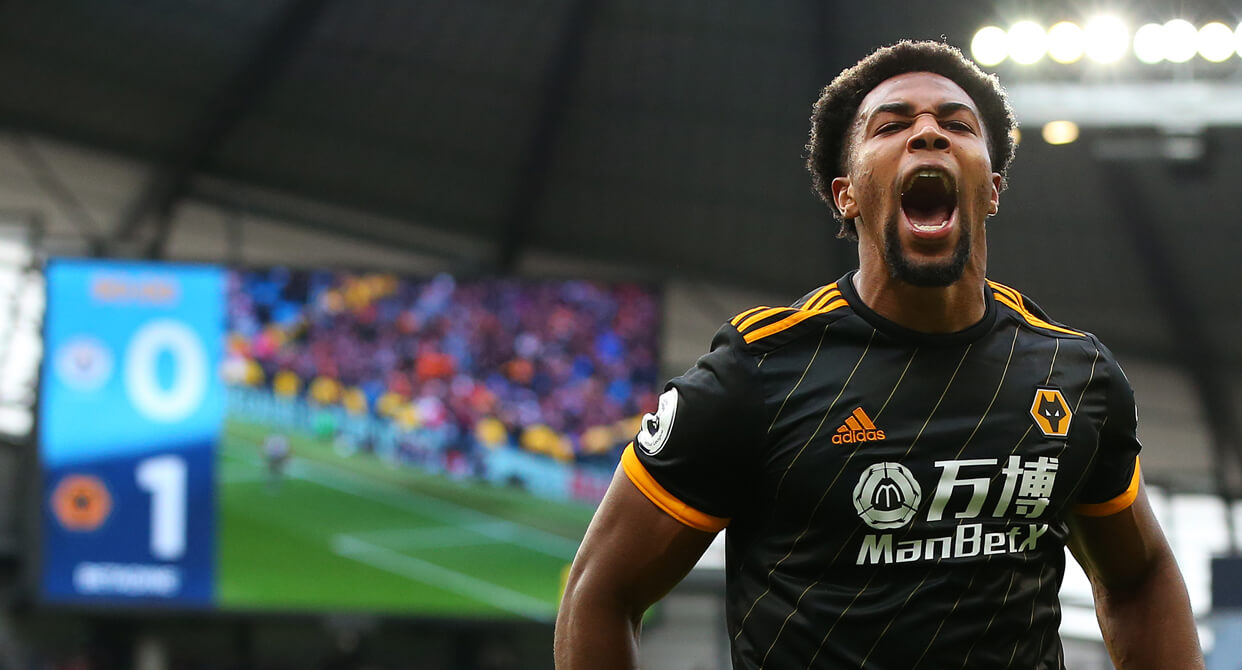 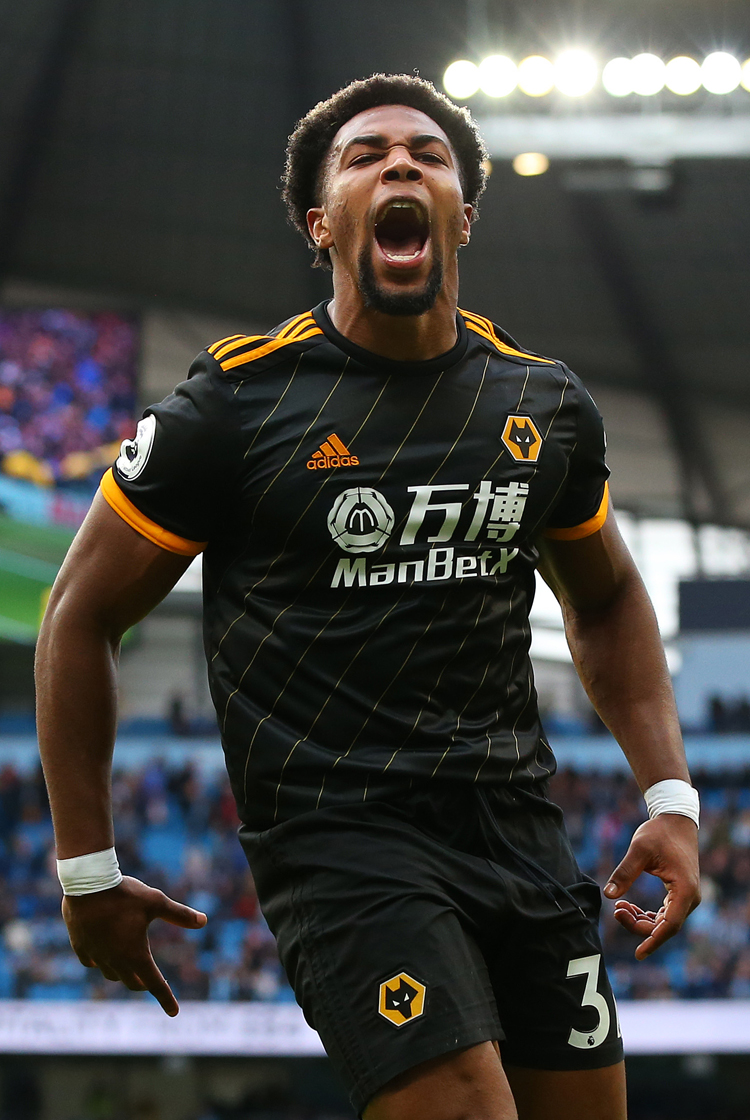 Manchester City’s stuttering start to their Premier League defence took a surprise turn for the worse with this disappointing defeat at home to Wolves. The visitors impressed against a number of the bigger teams on their return to the Premier League last season, and frustrated Pep Guardiola’s team for long periods at the Etihad. David Silva came closest to scoring for City, hitting the bar with a well-struck shot in the second half, but they were never at their best without the injured Kevin De Bruyne and fell to two late counter-attack goals – both made by Raul Jimenez for the lightning quick Adama Traoré. City stay second in the table, but are now eight points adrift of Liverpool; after a difficult start to their season, Wolves are up to 11th. 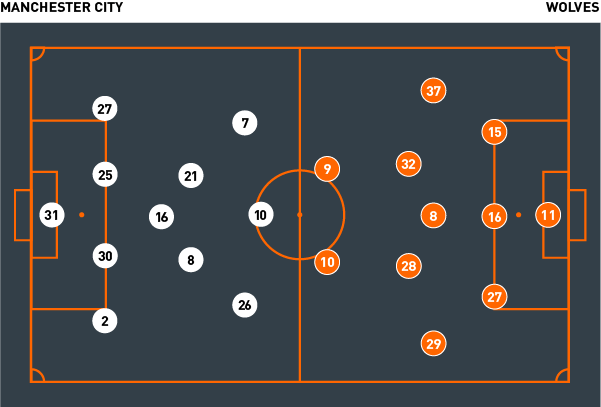 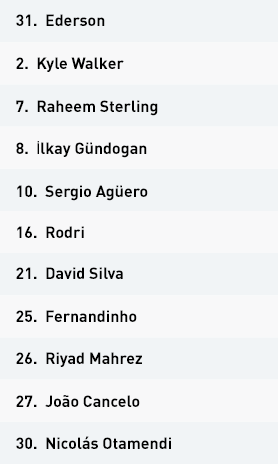 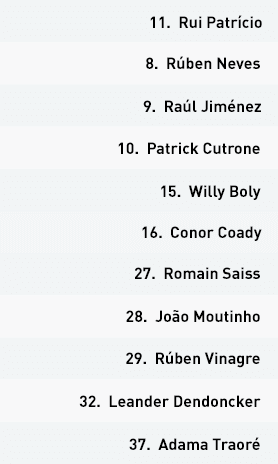 The hosts dominated possession and were tasked with breaking down an organised and compact Wolves block that allowed extremely limited access to the space in behind where City so often look to hurt teams. They circulated possession in an attempt to penetrate and showed a preference for attacking on the left, where Joao Cancelo and Raheem Sterling looked to interchange positions and combine to create gaps.

A common feature was to move the ball wide before playing it back inside. As the ball moved back inside, the players still on the outside would look to run in behind as the Wolves players focused on the ball. This culminated in some opportunities for City to receive beyond the Wolves defensive line and try to create goalscoring chances.

City’s only other method of creating chances was to deliver crosses into the box. This often came after trying to combine and move in behind in a wide area, but the aerial presence of the likes of Aguero, Sterling and Silva was of little threat against a commanding back three of Conor Coady, Willy Boly and Romain Saiss (later Ryan Bennett).

In the second half, City moved Cancelo to right-back, with Oleksandr Zinchenko coming on at left-back. They now looked to target the right, where Cancelo made numerous dangerous runs on the outside of Mahrez and later Bernardo Silva. Their rotations and combinations lessened as the game wore on, however, and City became increasingly frustrated. This led to more advanced positioning of the midfielders and full-backs – but this resulted in less security in transition, which turned out to be the hosts’ downfall as they dropped eight points behind leaders Liverpool.


Wolves set up in a 5-3-2 formation out of possession, with wing-backs Adama Traoré and Ruben Vinagre tucking in alongside Boly, Coady and Saiss (later Bennett) to form the defensive line of five. The visitors looked to remain compact and organised at all times, taking minimal risks in order to recover the ball. When defending centrally, they would keep a close distance between their individuals and were positionally oriented rather than picking up specific players.

As the ball travelled into the City full-backs, the nearest of the three Wolves central midfielders would engage. Ruben Neves would then move across and screen the pass into the nearest City midfielder, while the nearest centre forward would look to pick up the hosts’ single pivot Rodri. The wing-backs were responsible for tracking Sterling and Mahrez, but would pass them on if either looked to move inside.

The understanding and co-ordination between the Wolves players out of possession was what led to City creating few chances of any real quality. They were much more concerned with remaining in their positional slots and restricting space between and behind them than worrying about tracking their players into different areas, with the risk of leaving more dangerous spaces unprotected.

When they lost possession, Wolves were not particularly interested in counter-pressing, and instead looked to recover back into their shape. This enabled them to protect the more dangerous spaces, with the intention of forcing City into mistakes rather than proactively looking to recover the ball.

Nuno Espirito Santo set his Wolves side up in a 3-5-2 formation in possession, with Adama Traore and Ruben Vinagre as wing-backs outside a midfield trio of Leander Dendoncker, Ruben Neves and Joao Moutinho. Raul Jimenez and Patrick Cutrone started together in attack. The visitors set up with a clear game plan of conceding possession and waiting for their opportunities to hurt City in transition – they had only 26 per cent possession and registered only two shots on target throughout the 90 minutes.

While they looked to soak up City’s pressure and force mistakes, it was clear that Jimenez and Cutrone were ready to pounce on any transitional opportunities immediately by threatening to run in behind at the earliest possible moment during transition. Wolves would try to find their forwards early upon the moment of regain, although the chances they created in the first half tended to be through City giving the ball away cheaply rather than through regains in midfield or further back.

In the second half, Wolves had occasional established possession and would try to work the ball into wide areas with the intention of delivering crosses into the box. They eventually made the tactical switch to bring Matt Doherty on as the right-sided wing-back and move Traoré up front to partner Jimenez. This gave Wolves more of a physical threat in transition; the space outside the City centre-backs was a constant area of opportunity on the counter-attack, with the pace of Traoré and Jimenez always likely to cause Fernandinho and Nicolas Otamendi problems. So it proved, as Jimenez twice played in Traoré to finish past the stranded Ederson in the last 15 minutes and earn Wolves a famous victory against the champions.

City were rarely out of possession across the 90 minutes, but when they weren’t pressing high they utilised a 4-4-2 mid-block in which David Silva partnered Sergio Aguero on the top line. When they did press, City would look to use Aguero, Sterling and Mahrez to press Coady, Bennett and Boly respectively, while Silva picked up Neves and Rodri screened passes into the Wolves forwards.

The high press often left a fairly risky 4v4 match-up at the back, with Kyle Walker, Otamendi, Fernandinho and Cancelo responsible for Traore, Cutrone, Jimenez and Vinagre, although Wolves rarely troubled City during their build-up or established possession phases. Instead, it was the occasional failure of the City counter-press that got them into trouble and created opportunities for the visitors to hurt them on the break.