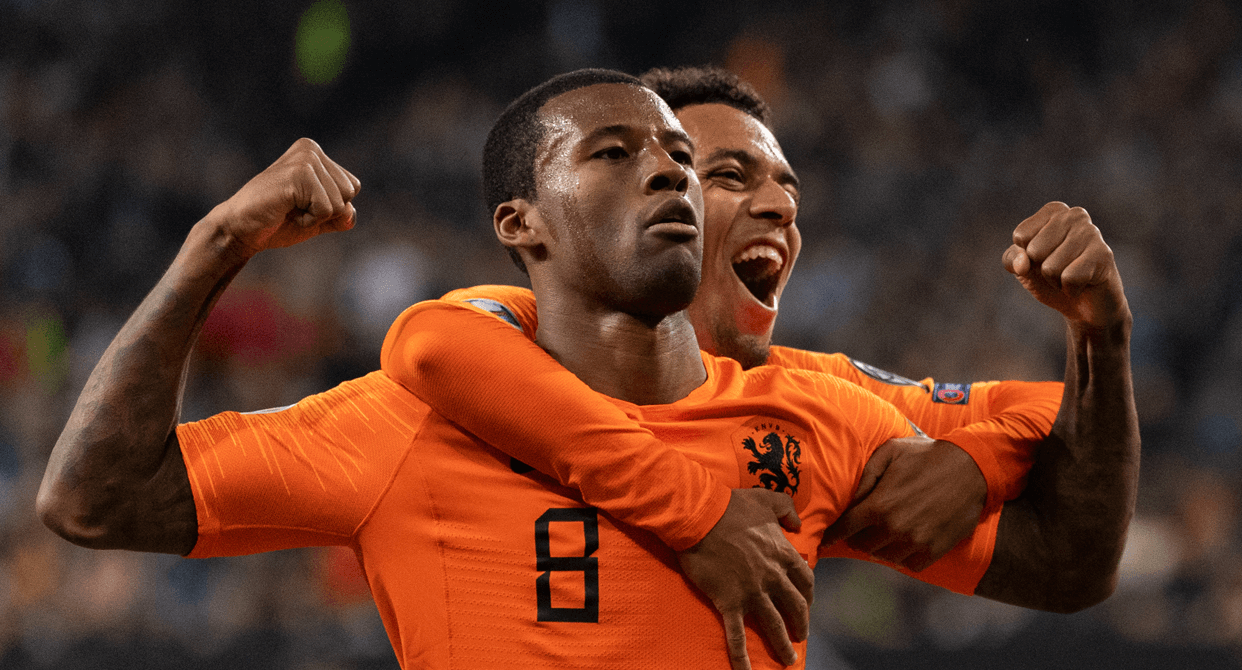 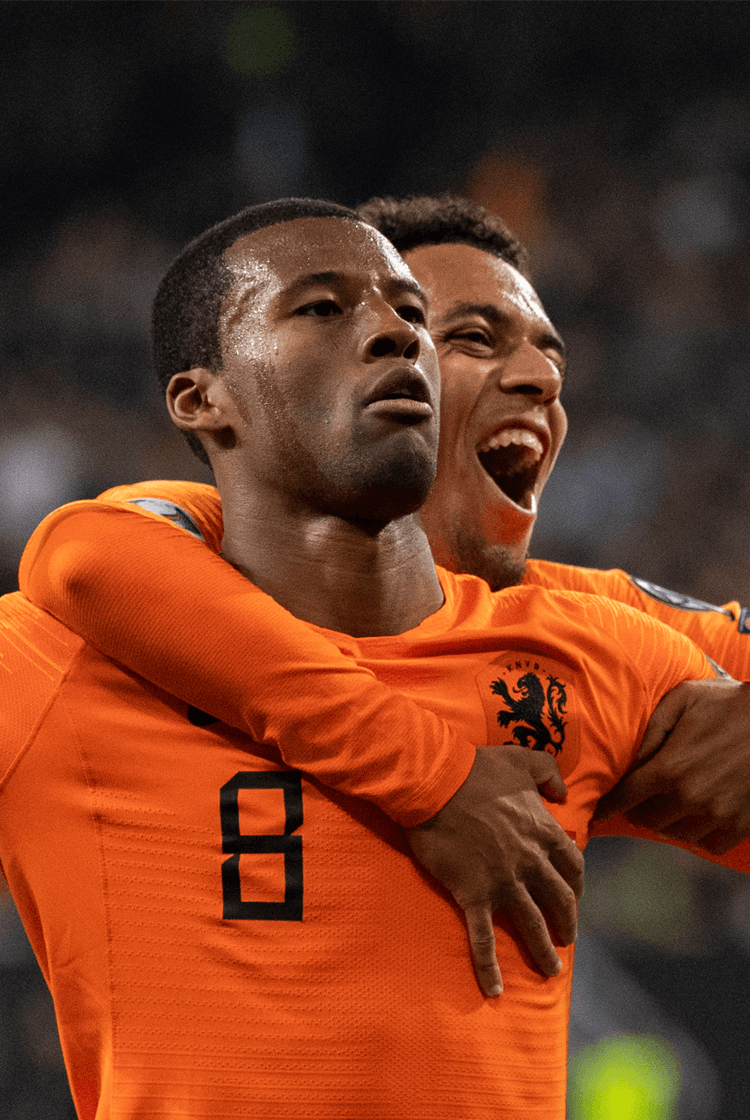 A second-half comeback earned the Netherlands their first victory in Germany since 2002, and a vital three points in their attempts to qualify for the 2020 European Championship. Former Arsenal attacker Serge Gnabry gave Germany the lead in the first 10 minutes, but Frenkie de Jong’s 59th-minute finish and an own goal from Jonathan Tah only seven minutes later put the hosts under pressure. A Toni Kroos penalty brought them level again, before substitute Donyell Malen – on his debut – added the finishing touch to a fine move and Georginio Wijnaldum put Ronald Koeman’s improving team out of reach in stoppage time. 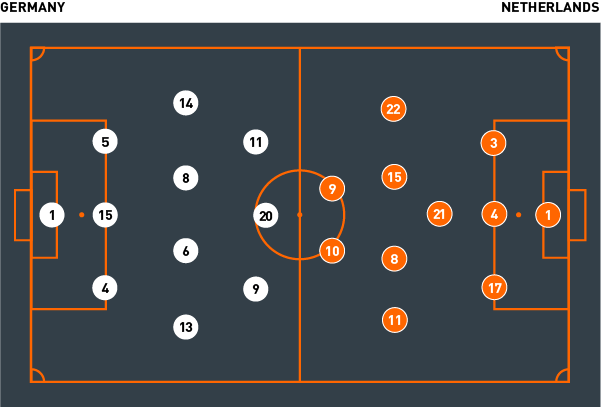 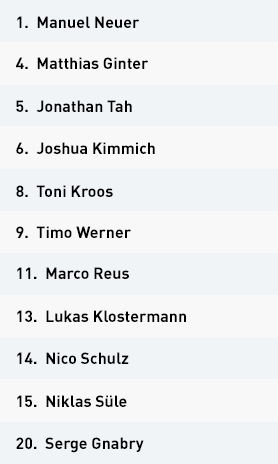 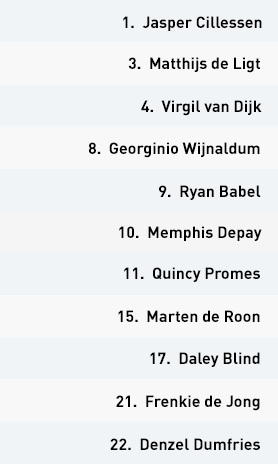 Joachim Löw organised Germany into a 3-4-3 formation when they were in possession, featuring Lukas Klostermann, Joshua Kimmich, Toni Kroos and Nico Schulz across midfield. Their early goal meant that they attacked on the counter for much of the first half and the early stages of the second, attempting to release their forwards in behind the Netherlands’ defence as early as possible.

With established possession they attempted to play with width by using their front three in narrower territory and advancing their wing-backs, creating five points of attack. They would also encourage their forwards to withdraw towards possession, drawing the opposing central defender or wing-backs and creating space out wide to advance beyond the Dutch defensive line, as they did in the build-up to their second-half penalty.

The front three often made lateral movements before dropping, to create uncertainty between the Netherlands’ central defenders – Virgil van Dijk and Matthijs de Ligt are among the finest in the world – regarding their respective responsibilities. As Germany began chasing the game, they had greater possession in the attacking half but were confronted by a compact block. They therefore looked to switch play to create spaces inside – but they struggled to do so amid the compactness of those defensive units.


The Netherlands used two approaches when out of possession: a 3-1-4-2 high press and a 5-3-2 mid-block. For the first, Quincy Promes and Denzel Dumfries would join Georginio Wijnaldum and Marten de Roon in a midfield line of four ahead of Frenkie de Jong, and just behind the front two of Ryan Babel and Memphis Depay. When pressing, Babel, Depay, Wijnaldum and De Roon respectively targeted Jonathan Tah, Niklas Süle, Kimmich and Kroos. De Jong operated behind them to cover, to press if Wijnaldum or De Roon advanced, and to move to screen any withdrawing Germany attackers.

The key to the Dutch defensive structure involved the wing-backs operating between their opposite wing-back and central defender. If possession reached the central defender not targeted by Babel and Depay, Promes left Klostermann to press that defender; left-sided centre-back Daley Blind would then close on Klostermann, while Van Dijk, De Ligt and Dumfries covered to ensure that they remained compact in shape.

When using their 5-3-2 defensive shape – as they did throughout the second half, until adopting a low block towards the final whistle in an attempt to preserve their lead – Promes and Dumfries withdrew to the defensive line, leaving De Jong, Wijnaldum and De Roon in a midfield three.

Ronald Koeman largely organised his team into a 3-1-4-2 formation that could also be considered a 3-4-3 diamond, in which Frenkie de Jong featured at the base of the diamond, behind Georginio Wijnaldum and Maarten de Roon, and with Memphis Depay at the tip. Wing-backs Quincy Promes and Denzel Dumfries had such advanced roles that they were essentially in the same line as lone striker Ryan Babel, while Depay consistently withdrew into attacking-midfield positions to link play and attempt to overload Germany midfielders Toni Kroos and Joshua Kimmich.

Babel stretched play to restrict Germany’s central defenders from moving with Depay; he was allowed to receive and turn, but the Netherlands were largely frustrated and struggled to create throughout the first half. They used De Jong to drop into defence in an attempt to create a four-against-three overload against the first line of Germany’s press, which came from their three attackers. They also used De Roon and Wijnaldum in false full-back positions to achieve that same overload and to allow their wing-backs to advance.

That midfield overload was used much more during the second half, in an attempt to draw Germany’s wide central defenders, and to create space inside for the runs of Babel, Depay and the wing-backs. When they got beyond Germany’s defensive line – predominantly on the outside – they looked for a flat delivery or cutback for advancing runners to attack, as was seen with De Jong’s equaliser. Their second-half substitutions also meant Babel taking a wider position, where he was more effective receiving to feet and running at the opposing defenders, having struggled as the lone striker with his back to goal.

When out of possession, hosts Germany used a 5-2-3 shape in which wing-backs Lukas Klostermann and Nico Schulz dropped in alongside centre-backs Matthias Ginter, Niklas Süle and Jonathan Tah. They largely played in a mid-block; the front three attempted to pressure the three-strong Dutch defence while monitoring the midfielders behind them. Central midfielders Toni Kroos and Joshua Kimmich were forced to cover wide spaces and given responsibility for the ball-side midfielder and the spaces inside, leaving the far-side midfielder to screen passes into Depay. Ginter and Tah occasionally moved with Depay, depending on his positioning, in an attempt to stop him receiving and turning.

Germany’s disciplined defensive line remained compact until the second half, when the Dutch increasingly used their free midfielder and the hosts moved individuals away from the defensive line, creating spaces the visitors were able to exploit. Löw’s team also looked vulnerable in transition, particularly in the wide spaces that existed during the early stages of their build-ups. The Dutch were able to successfully take advantage of these spaces in a strong second-half display that earned them a valuable three points in a competitive group.