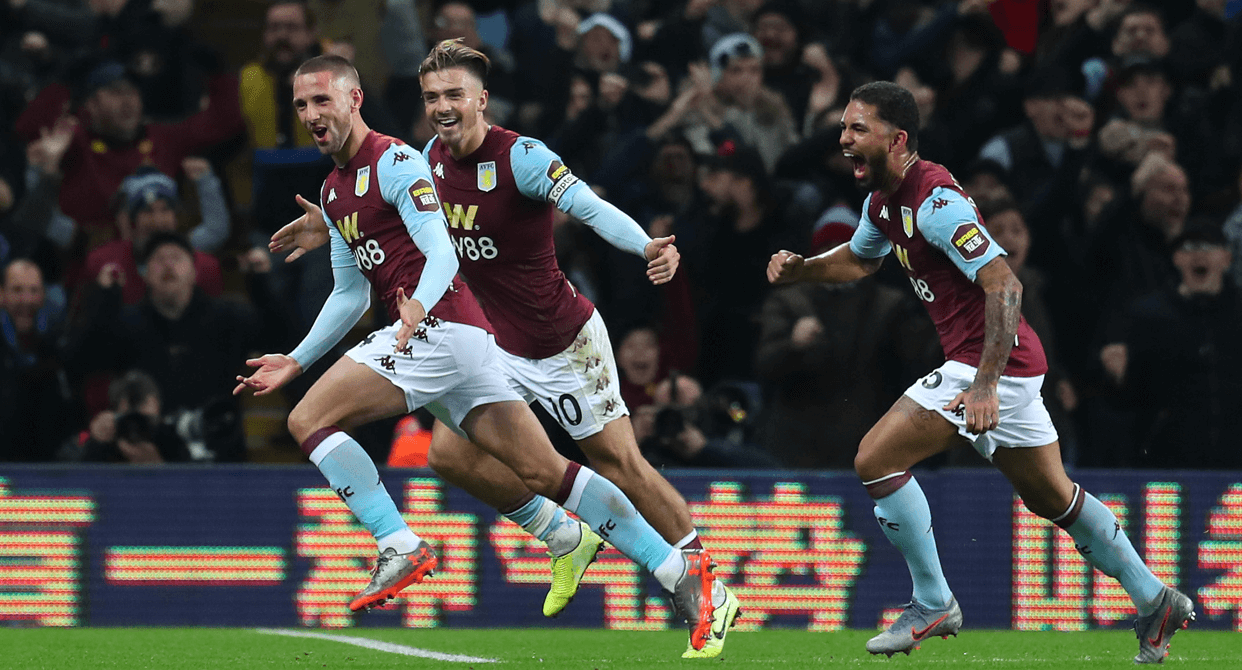 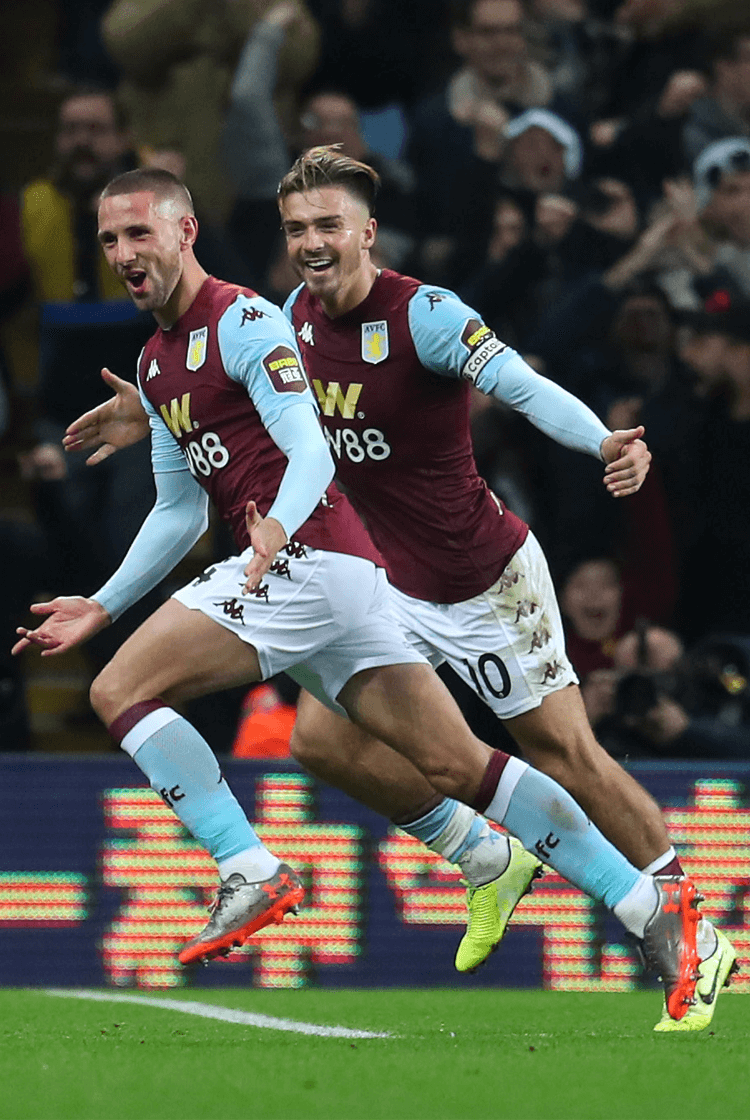 Steve Bruce experienced defeat on his return to Villa Park, with Newcastle. Ending a run of three successive defeats, first-half goals from Conor Hourihane and Anwar El Ghazi gave them a commanding lead and three vital points that took them up to 15th, four points clear of the Premier League's relegation zone. Newcastle sit 14th, and one point in front of them, but experienced another evening during which they rarely looked like scoring. "The first half in particular we did not do enough with or without the ball," said Bruce. "We felt we were harshly done by with two free-kicks, but the way Conor Hourihane has executed them made it a difficult night. The game was gone in two minutes although we had chances before and after half-time when Tom Heaton made some good saves. (The injured) Jamaal Lascelles is our captain and has been playing very well. You are always going to miss your best players." 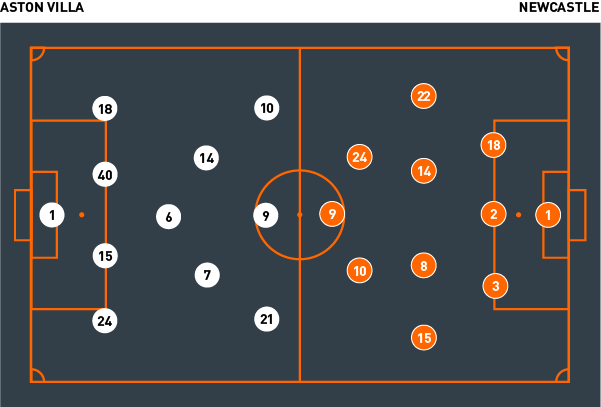 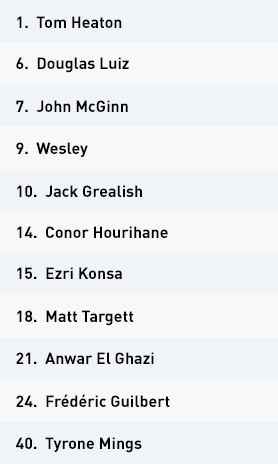 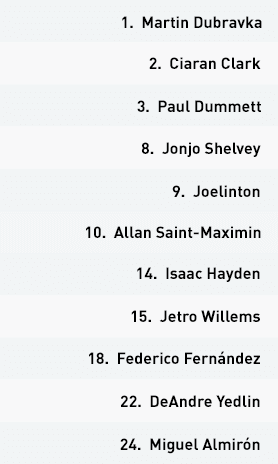 Aston Villa were organised by their manager Dean Smith into a 4-3-3 formation, led by their lone striker Wesley, and in Newcastle hosted opponents who defended in a 5-4-1. The visitors also operated in a mid-block positioned in Villa's attacking half, and had little desire to engage with them until they crossed the halfway line.

Joelinton, also operating as a lone striker, for Newcastle, was instructed to remain between possession and Douglas Luiz, to encourage play towards one side of the pitch. Villa attempted to circulate possession across the pitch as a means of advancing, but were undermined by too many of their players being too far forwards, and moving towards the ball in isolation.

Villa had very few opportunities to penetrate beyond Newcastle's defence. They positioned players outside of the visiting wing-backs in their pursuit of working around their defensive block – there often remained only 12 yards between their visitors' defence and midfield – and to play crosses into the penalty area, but they continued to struggle to create goalscoring chances.


The defensive approach demanded by Steve Bruce was succeeding, but they were undermined by two reckless challenges that conceded the set-pieces from which Villa scored. When that left Newcastle needing to score, and therefore forced them to attack, Smith's team was able to threaten in transitional moments. Twice towards the first half's conclusion they broke with an overload but lacked the final ball or finishing touch required to extend their lead.

Newcastle played with greater aggression during the second half, attempting to press Villa high up the pitch and ultimately contributing to an increased tempo. The hosts therefore had more space to take advantage of, and attempted to play to Wesley's feet and to support him with runners, and combinations. Jack Grealish particularly relished the spaces available between the lines and created further chances, but they were also not finished.

On the occasion of his return to his former club, Steve Bruce had Newcastle adopt a 3-4-3 when they had possession, in which Miguel Almirón and Allan Saint-Maximin advanced to join central striker Joelinton in a front three. Aston Villa pressed from a 4-3-3, which occasionally became a 4-5-1, on the rare occasions that their visitors had established possession.

Newcastle prioritised a counter-attacking approach and, in moments of transition, attempted to send possession wide as early as possible in an attempt to use their wide attackers and wing-backs in combination, before crossing into the penalty area. Owing to them remaining in such deep territory when they were without possession, they had a significant distance to travel before truly posing an attacking threat, undermining that counter-attacking approach.

When in possession, central midfielders Jonjo Shelvey and Isaac Hayden were used from deep positions and asked to dictate play, and to send possession out wide and in behind, to complement the dribbling qualities of Saint-Maximin, who regardless too often struggled to produce. Villa pressed them high up the pitch, and their front three encouraged Newcastle to take possession wide, in the knowledge that those in central positions would be covered and that longer passes would likely follow. Douglas Luiz, playing as the single pivot in front of the hosts' defence, was then consistent in collecting the second balls that emerged from those longer passes.

During the second half Newcastle played with greater aggression, contributing to an increasingly transitional affair. They therefore had more counter-attacking opportunities, but their passes were too often too slow or too flat, essentially inviting Villa to recover their positions.

When Andy Carroll replaced Paul Dummett their shape resembled a 4-2-4 led by Joelinton, Carroll, Saint-Maximin and Almirón. Their increased presence in the penalty area, and Carroll's physicality, contributed to chances, and therefore Tom Heaton being forced into several saves.