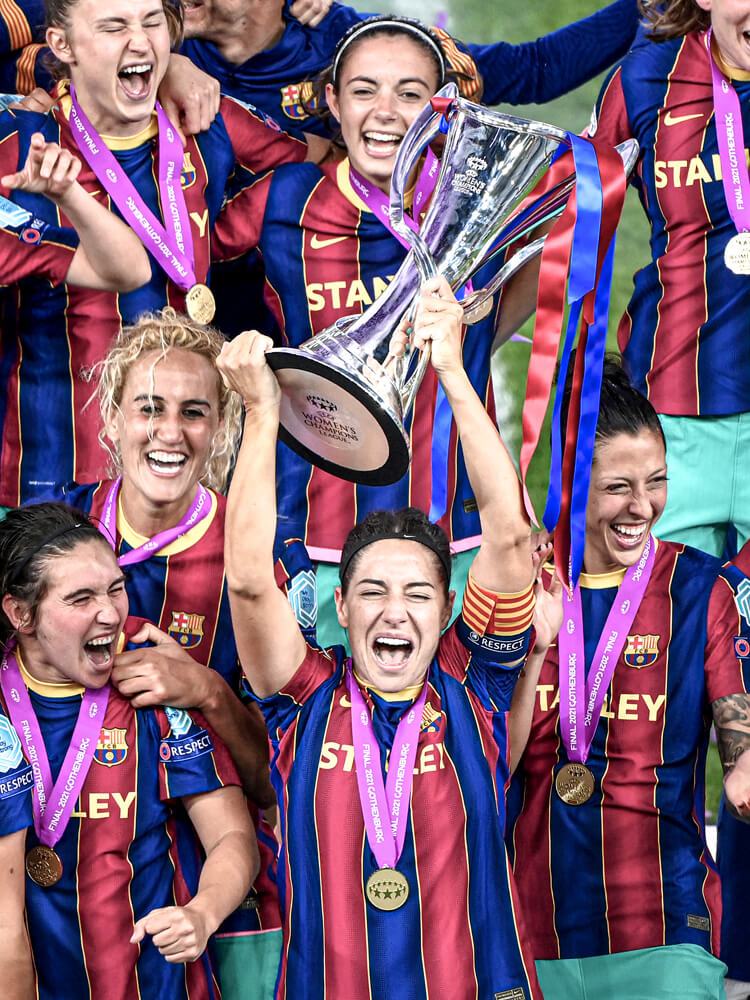 Chelsea Women's sensational run in this season's UEFA Women's Champions League ended in heavy defeat to Barcelona in the final in Gothenburg. Emma Hayes' team – already crowned domestic champions – had seen off Atlético Madrid, Wolfsburg and Bayern Munich on their way to a first ever Champions League final, but they fell behind to a first-minute own goal and lost any chance they might have had in a catastrophic first half. Barcelona captain Alexia Putellas doubled the lead from the penalty spot inside the quarter-hour, and further goals from Aitana Bonmatí and Caroline Graham Hansen before the break killed the game as a contest. Chelsea created enough chances of their own to make more of a mark than they did in the final, but Pernille Harder in particular failed to convert on what will go down as a desperately disappointing night for Hayes and her team.

Emma Hayes set her team up in a 4-3-3 formation, with dynamic attacker Pernille Harder starting as the central forward, flanked by the world-class attacking pair of Fran Kirby and Sam Kerr. Sophie Ingle started as the deepest-lying central midfielder of a flexible three in the middle of the park, with Ji So-yun and Melanie Leupolz either side of her.

In the early stages, however, Chelsea struggled to deal with Barcelona’s intensity. The Spanish side dropped into a 4-5-1 out-of-possession shape but pressed from the front line, with forward Jennifer Hermoso forcing play to one side of the pitch. The aim was then to regain possession on the second phase of the press, from a rushed or forced pass into midfield. They rarely appeared in a flat line across midfield, adopting different heights depending on the position of the ball. Midfield pivot Keira Hamraoui took responsibility for screening Chelsea attacks in wide areas, moving to the channels in the Barcelona defensive third and trying to force play back up the field.

After the initial Barcelona pressure subsided, Chelsea started to appear more comfortable on the ball. Ji often dropped to adopt the pivot position at the deepest point of the midfield, looking to connect into the feet of Kirby and Kerr, or in beyond for Harder. The South Korean operated mostly in a box-to-box role, and looked to support the attacking players when moving into the final third of the pitch.

As the half progressed, the exchange of positions between the Chelsea midfield three become more fluid; at times, Ingle and Leupolz also looked to create a double pivot when the team was playing forward from the back.

Captain and centre-back Magdalena Eriksson often looked for a long diagonal ball towards Kirby if there was space beyond the Barcelona back line, while Harder would look to withdraw into deeper positions to receive the ball directly from the defensive line. Right-sided centre-back Millie Bright often looked to execute the same ball to the opposite side, playing a direct driven pass deep to the left flank.

In the early stages of the second half, with the game almost certainly gone at 4-0 down, right-back Niamh Charles looked to adopt a much higher position when Chelsea attacked, playing in line with the front three. This attacking strategy created more forward options for Chelsea, and playing the game further up the pitch forced Barcelona to defend in deeper positions. When regaining possession, they looked to transition into attack with intensity, aiming to exploit any space in the Barcelona defensive line.

Kirby in particular looked to steal possession and drive into vacant spaces, driving the ball across central areas. Harder was versatile in her positioning and moved to support the wide forwards in the channels, while still occasionally withdrawing to affect the game as a traditional number 10.

The eventual additions of Guro Reiten, who replaced Leupolz at half-time, Erin Cuthbert and Beth England injected new energy into the attacking line, with the English team looking to push four amd sometimes five players up against the Barcelona defensive unit. They looked to push their full-backs into increasingly advanced positions, sometimes leaving Bright and Eriksson isolated at the back, but they struggled to consistently attain the high level of technical detail required to unsettle a Barcelona team that ultimately coasted to their first ever Women’s Champions League title.

A first-minute drive from Martens in behind Chelsea right-back Niamh Charles ended with a rasping shot against the bar, and the ensuing own goal that earned Barcelona such an early lead had an inevitable impact on the game. They maintained their strategy of attacking both Chelsea full-backs, with two more Martens runs on the Barcelona left playing crucial roles in the eventual champions’ third and fourth goals before half-time.

Barcelona moved the ball quickly in the early stages of the game, and were keen to play directly in to central forward Hermoso when in possession and apply a high press when without the ball. When they did build play from the back, midfielder Aitana Bonmatí would withdraw to a deeper position alongside the influential Hamraoui, creating more opportunities for touches on the ball and waiting for the right time to play forward. This movement would trigger the third midfielder, Putellas, to move forward and support the attacking line, thus creating a range of forward passing options.

Their third goal, on 20 minutes, highlighted an interchange in position between central forward Hermoso and midfielder Bonmatí. This moment of the game highlighted Barcelona’s ability to drop attacking players into deeper positions, creating space for midfielders to exploit further forward. This interchange stretched and pulled the Chelsea back line apart, disrupting their compact shape.

On the right, Hansen regularly adopted a wide starting position outside of Chelsea left-back Jessica Carter. If receiving to feet, Hansen looked to drive infield and across the defensive unit, creating space in the wide channel she had just vacated for right-back Marta Torrejón; the constant support of Bonmatí on the Barcelona right enabled them to create overloads and afforded the opportunity to play with limited touches in a way that gave the Chelsea defence consistent problems in a nightmare first half.

Taking a 4-0 lead into the second half, Barcelona were able to be more controlled and patient in their play. Potentially anticipating an intense Chelsea press, they were content to defend more deeply and wait for the best moments to play forward. This mid-to-low block gave Chelsea more time and space when starting an attack, but nullified the impact of the long diagonal balls played forward by the Chelsea centre-backs so frequently in the first half.

In truth, Barcelona were technically dominant in 1v1 duels across the pitch throughout the match. Combined with their dynamic movement off the ball and interplay between the units, the Spanish team were often unplayable during a disappointingly one-sided final.