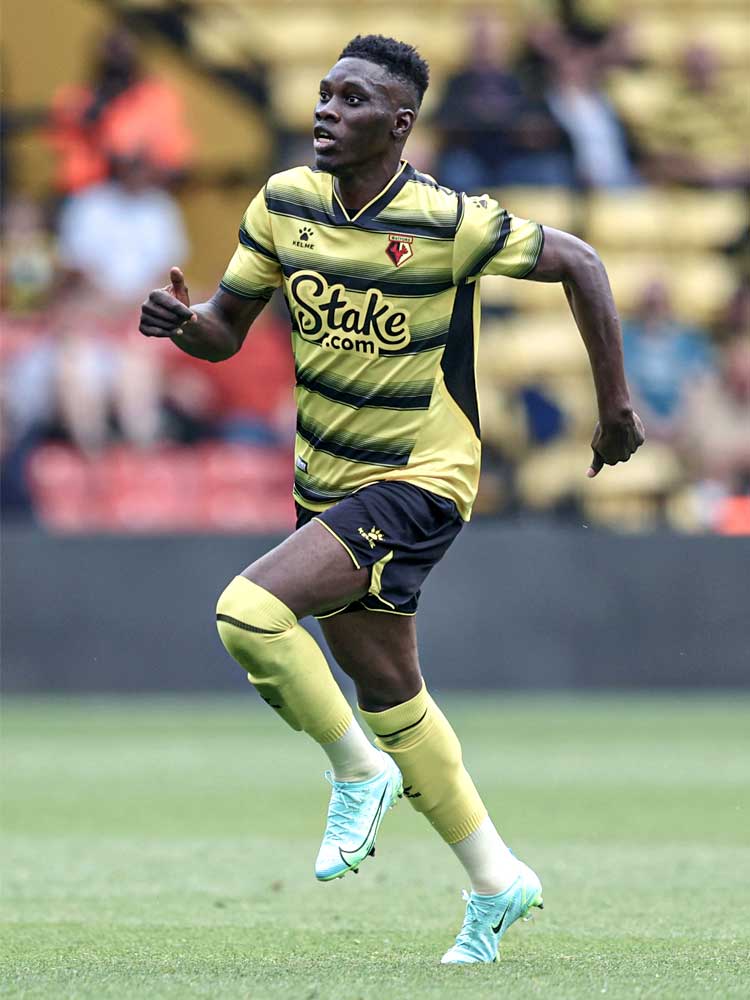 Ismaïla Sarr finished the 2020/21 Championship season as Watford’s top scorer, benefiting from head coach Xisco Muñoz’s change from the 4-4-2 and 3-5-2 of predecessor Vladimir Ivíc to a single centre-forward supported by two wingers in a 4-3-3. The Senegal international will surely have a significant say if Watford are to avoid an immediate return to the second tier, but he is by no means the only wide threat in the team.

Experienced strikers Troy Deeney and Andre Gray were replaced by João Pedro as Xisco settled on the formation that ultimately secured promotion last season. Both of the team’s wide attackers – Sarr on one flank and Ken Sema on the other – proved particularly effective when moving inside and making penetrative runs between the opposing full-back and centre-back (below). Full-backs Kiko Femenía and Adam Masina held their width and played bounce passes into the narrowed wingers, which was an ideal tactic when the central spaces were closed off. The midfield trio often supported this build-up, assisting through the inside channels while still providing enough space for Sarr and Sema to move inwards and receive.

Unlike many teams that use wingers who come inside from a wide starting position, however, Watford didn’t use Sarr and Sema as wrong-footed wingers. Right-footed Sarr operated from the right, with the left-footed Sema from the left. This meant plenty of runs and dribbles around the outside of their opponents in the final third, before driving crosses and shots across goal. The duo also added much-needed support around João Pedro, often finishing goals from close range on their respective sides.

This may prove crucial in the Premier League, as Watford will inevitably have less possession than mostly superior opponents and thus require numbers penetrating inside the penalty area as frequently as possible. The pace that both Sarr and Sema possess should also add to the team’s threat on the counter-attack, which could in turn force opposing full-backs to adopt a more conservative approach than many teams would like them to.

The Hornets have also added Josh King, Ashley Fletcher and Emmanuel Dennis to their ranks, all of whom are well-suited to a central attacking role. Xisco could potentially use a 4-2-3-1 shape for the new season, then, with Sarr and Sema out wide and a double pivot providing cover whenever a full-back advances in support of the narrowing wingers. That would leave a number 10 to operate in between the two wingers – useful in both counter-attacking play and when trying to break down a defensive block.

Quite who that number 10 could be in the current squad is open to debate. Will Hughes could be one option, if he remains at the club, although he is more of a six these days. Another option is Tom Cleverley, but he does not provide much in the way of creativity. Whichever formation Xisco starts the season with will feature Sarr in his familiar wide role – Sema is less sure of his starting berth – and the success or failure of the team’s campaign will rest largely on how well he performs.