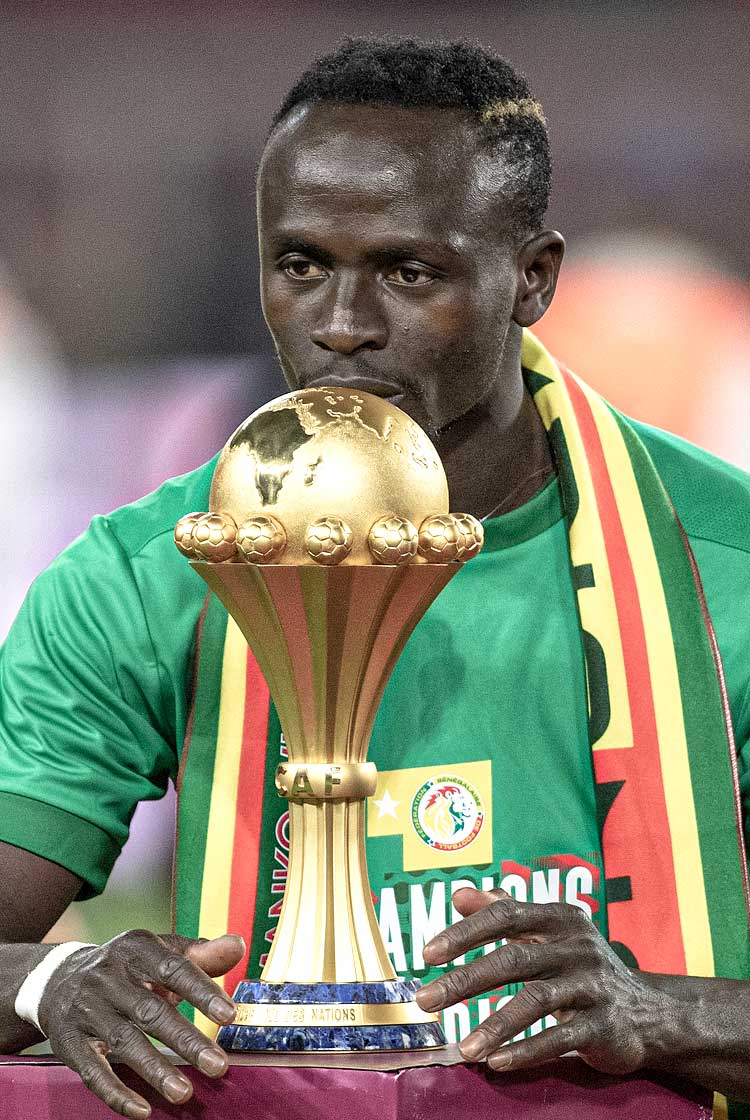 Sadio Mané beat Liverpool teammate Mo Salah to the Africa Cup of Nations trophy after a dramatic penalty-shootout victory for Senegal over Egypt. In an affair that produced little in the way of real attacking quality, a first-half penalty for Senegal looked like it might open the game up. However, Mané failed to take advantage and Egypt goalkeeper Gabaski palmed his powerful effort away.

The game remained goalless for a full 120 minutes, and was eventually decided on penalties. This was Egypt's third shootout of the tournament, having eliminated Ivory Coast and hosts Cameroon on their way to the final. It was third time unlucky for Carlos Quieroz's men, though, as Mané redeemed himself with the winning penalty, to earn Senegal their first ever AFCON title.

"It just shows that if you work hard, if you persevere, you will get what you want," said Senegal coach Aliou Cisse, whose shootout miss as Senegal captain in the 2002 tournament handed Cameroon the title. "I am very emotional because the people of Senegal have wanted this trophy for 60 years."

Senegal were set up in an in-possession 4-3-3, with Saliou Ciss pushing forward from left-back. Sadio Mané moved inside from the left flank to attack around Egypt’s midfield three. Cheikhou Kouyaté moved forward from central midfield to occupy one of Egypt’s two centre-backs, joining centre-forward Famara Diédhiou up front (below). Senegal made early progress through combinations on their left side, with Mané threatening through the inside channel, and Ciss’ overlapping runs  stretching the opposition. One Ciss run around Egypt’s 4-3-3 mid-block drew the foul that led to an early Senegal penalty, which Mané failed to convert.

Direct play down the right

As the first half progressed, Senegal had some joy down their right. Winger Ismaïla Sarr moved inside, creating space for full-back Bouna Sarr to overlap and receive direct passes in behind. Due to Egypt’s marking system, Ismaïla Sarr dragged Egypt’s left-back inside, creating more room for the right-back to overlap into (below). As the game went on, this proved Senegal’s main route forward, because Egypt dealt with Senegal’s left side more convincingly.

In the second half, Mané had more freedom to drift inside. He looked to receive between the lines and drive forward with the ball, and also make central, off-the-ball runs in behind. Left-back Ciss continued to push forward, but he lacked the support he received from Mané in the first half. On the right, however, Bouna Sarr underlapped through the inside channel more, and combined effectively with Mané, who had drifted across (below). Senegal’s central midfield three were also much more fluid, alternating which player pushed forward in support of Mané.

With Senegal pushing forward against Egypt’s ever-deepening defensive block, both full-backs pushed up very high to create width outside the Egypt back four (below). A narrow front three formed between the lines, receiving direct passes from the centre-backs. Senegal’s central-midfield three held their positions to stop Egypt’s central counter-attacks, before widening during build-up to help connect the two centre-backs with the full-backs and narrowed wingers.

As the game moved into extra time, Egypt formed a deep 4-5-1. The resulting lack of space in behind prevented Senegal from playing over their opponents (below). They instead had to play around the outside, but crosses from the byline led to little, with Egypt packing the box with defenders. In the end, it came as little surprise that the final drifted to a penalty shootout – the sixth in 12 AFCON tournaments since the turn of the century.

Egypt used a 4-3-3 in-possession structure against Senegal’s 4-4-2 defensive shape. Right-back Emam Ashour pushed forwards, while Mo Salah moved into the inside right channel, aiming to receive between the lines and inside Senegal’s left-sided midfielder. With Ashour high up and occupying Senegal’s left-back, Salah and centre-forward Mostafa Mohamed looked to isolate the two centre-backs (below). Left winger Omar Marmoush completed the front four. Hamdy Fathi dropped out of central midfield to cover at right-back, often leaving Mohamed Elneny and Amr El Soleya as a double pivot.

Senegal’s front two and wide midfielders screened passes into Egypt’s midfield and full-backs, so direct forward passes were often Egypt’s best route upfield (below). They looked for Mohamed or Marmoush in withdrawn positions, while Salah then moved high as the main threat in behind. The Liverpool forward was often too isolated, though, and Senegal’s centre-backs dealt well with balls targeting the space in behind them.

From their deep defensive block, Egypt attempted to counter-attack wide, trying to avoid Senegal’s midfield three. Salah moved into a more permanent central position in a 4-2-3-1, with substitute Zizo moving inside from the right. A permanent double pivot allowed both full-backs to push forwards, with left winger Trézéguet – another substitute – doing some good work to release left-back Fatouh (below). Marwan Hamdy came on to provide additional presence up front while Salah operated between the lines. However, Egypt’s very deep block meant their players had too far to travel to join attacks and they struggled to create much of note in a game they ultimately didn't deserve to win.