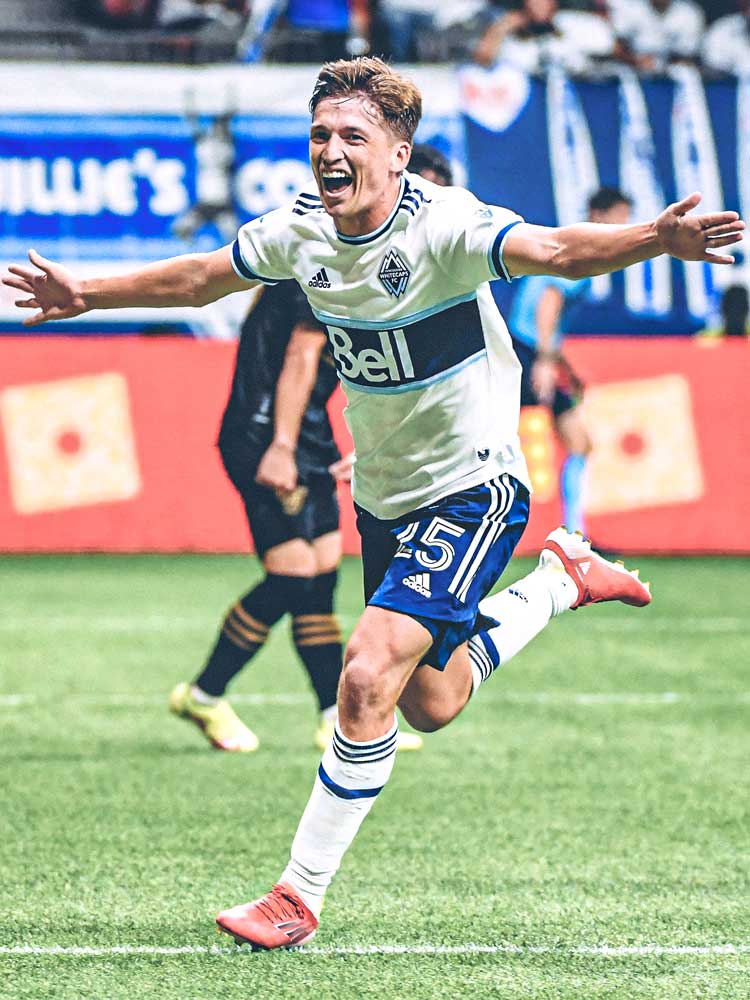 Profile
Once described as the "Scottish Messi", the talented Ryan Gauld's career took him from Portugal and Farense to Vancouver Whitecaps and Major League Soccer at the age of 25 in July 2021. Committing to the club until 2024, there is every chance they will benefit from his prime years.

That he spent so much of the previous seven seaons in Portugal demonstrated that his talents may even be unique in Scottish football, as was once recognised by former Rangers manager Pedro Caixinha. "He’s a very smart player, who thinks about the game differently," the Portuguese said. "He has a different mindset."

Tactical analysis
Gauld is a left-footed attacking midfielder at his most effective when deployed as a 10. There have also been occasions he has featured wide, but it is when he is more central that he particularly excels at finding space between the lines (below), from where he can receive in positions of potential, and turn and create.

From central territory he relishes releasing with the ball with the outside of his foot and seeks to play forward passes and accelerate attacks. When he is marked or has less time and space he still often proves capable of finding those making runs in behind and timing his release while his teammates remain onside and potentially before their opposing defenders can recover their defensive positions.

His preference to receive to feet also takes Gauld into the inside channels, and on rarer occasions wide – it is from the left that he has been seen delivering outswinging crosses that aggressively dip into the penalty area instead of travelling at a steadier height. From the right he is likelier to thread passes into the area from closer infield.

By drifting wide he can potentially lose his marker before receiving the ball and then playing it forwards between (below) or over opposing defenders, potentially towards the far post. His favoured technique of lofting aerial balls regularly complements teammates making runs in behind while attempting to avoid their opposing goalkeeper, in the same way it can make him effective at taking set-pieces, from which he has recorded numerous assists.

When between the lines while wide, or from a shooting position in the centre, Gauld consistently seeks, as quickly as possible, to take possession on to his left foot. From deeper or wide territory he can twist and turn with speed to do so, but from closer to goal his desire to receive on his left foot can mean him taking too many touches or adopting unnatural body positions that undermine potential opportunities to shoot early.

It is when he has more seamlessly taken the ball on to his left foot that he poses an increased threat on goal. Off-the-ball forward runs that take him in behind, coupled with his acceleration, regularly give him an advantage over defenders, particularly during moments of transition. From the final third he is also particularly aware of the potential for secondary play (below), which means he often impresses when supporting around a striker and anticipates knockdowns, second balls and deflections. Should an attack be developing through wide territory while he is central, Gauld will offer those same forward runs and join the striker in front of him in attacking any crosses that are played. He is also an effective taker of penalties.

Role at Farense
During his two years with Farense, Gauld mostly featured as an attacking central midfielder in what was most commonly a 4-2-3-1 (below). Their full-backs – Fábio Nunes, Tomás Tavares, Abner and Alex Pinto most commonly vied for selection – advanced to provide their attacking width, and the double pivot formed by Jonatan Lucca and Amine Oudrhiri therefore provided defensive cover in front of their central defenders and from behind Gauld, who represented their favoured link between midfield and attack.

A narrow attacking line involved their wide forwards regularly moving infield into central territory to provide penetrative runs in behind, and to encourage their full-backs to provide overlaps. With that unfolding around him Gauld regularly demonstrated his versatility by contributing to the creation of space for his teammates to dribble back infield and by offering close support for potential combinations. There were also occasions when he bounced play into those making forward runs through wide territory – often after receiving the ball from those at full-back – and did so towards both the left and right.

Gauld's influence in assisting in linking from their double pivot and into their narrow attacking line, and his intelligent positioning and passing, made him a particularly important player. In the 2020/21 Portuguese Primeira Liga he was among the top 10 for both goals and assists.

With their attacking line seeking to offer regular rotations, he often sought to drift into the right inside channel to receive the ball and then play it in behind (below), perhaps for those moving wide. Using his left foot, the angle existed for him to loft balls over towards the far post, or in behind for their overlapping right-back to chase, if he wasn't cutting back infield to shoot.

When he instead drifted towards the left, Gauld ended up in a wider position, in turn encouraging their left-back to make underlapping runs. From those wider positions he also had an increased number of opportunities to deliver outswinging crosses to those in the centre, complementing the passes he played from the left inside channel.

If their left-back instead overlapped around Gauld, they needed to do so through particularly wide territory, risking stalling their attacks, and the quick progression of possession that Gauld so clearly values.