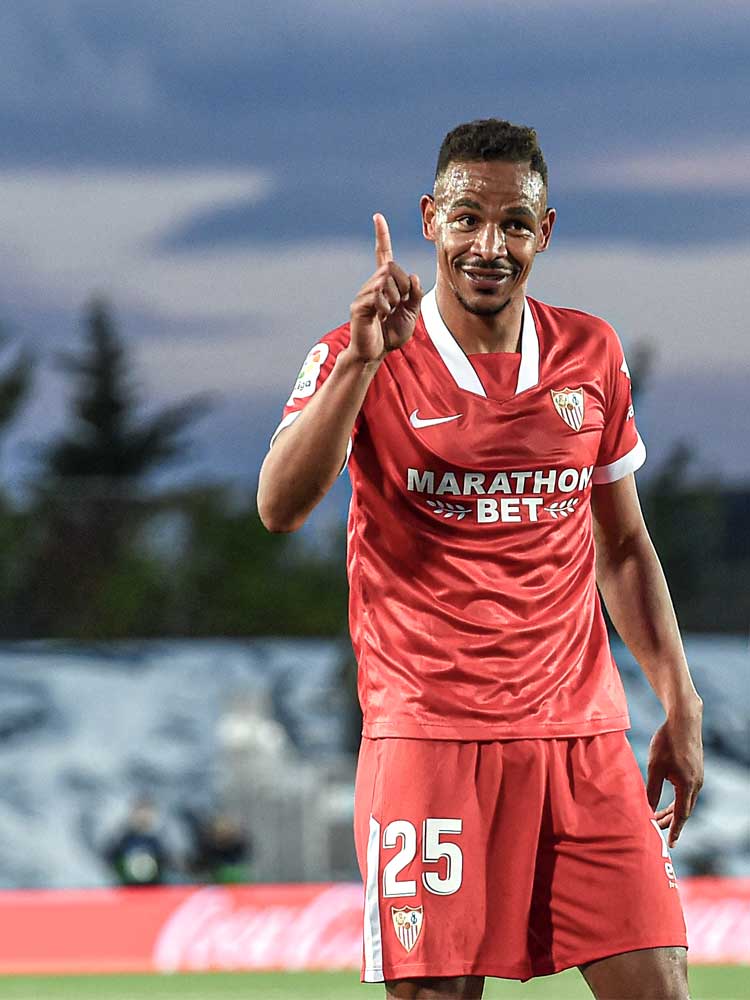 Real Madrid squandered the chance to take the initiative in La Liga's title race when they drew at home to Sevilla. Eden Hazard deflected Toni Kroos' shot in deep into second-half stoppage time, securing what could yet remain a valuable point, but a result that leaves them two points behind cross-city rivals Atlético Madrid and level with Barcelona with three matches each still to play. Fernando Reges gave Sevilla the lead during the first half, after Karim Benzema had had a header ruled out for offside. Following Real substitute Marco Asensio's equalising goal, Ivan Rakitic restored Sevilla's lead from the penalty spot. “We’re happy with our performance, the second half was spectacular,” said Real's manager Zinedine Zidane. “We got off to a slow start in the first 25 minutes, but the second half was really good. The league isn’t in our hands now, but we’ll fight right to the end.” His opposite number and predecessor Julen Lopetegui said: "The team did a very good job in each half with two different approaches as we dropped back in the second, but we lacked some precision in the final third in some moments."

Real Madrid were organised by their manager Zinedine Zidane into a 4-3-3 formation led by Karim Benzema. Their visitors, Sevilla, defended with a 4-5-1, via Suso and Lucas Ocampos withdrawing into midfield.

During their periods of possession Real attempted to attack with speed. Vinícius Júnior drove at Jesús Navas and sought to attack infield, commit defenders towards him, and even at times shot at goal from distance, and Luka Modric and Toni Kroos withdrew to in between full-back and central defender to encourage Marcelo and Álvaro Odriozola to advance. The latter delivered the ball from which Benzema found the back of the net, when his header was ruled out for offside.

If Real succeeded in progressing possession to where Sevilla were prioritising defending the spaces around the penalty area, there were occasions the visitors adopted a 5-4-1 to increase their defensive security in central territory and to force Real to change their point of attack. Ocampos' work ethic was also significant in Sevilla's defensive efforts. He sought to stop possession travelling wide by cutting the passing lanes that existed between central defender and full-back or full-back and wide forward.

Combinations in wide areas were important for Real. The understanding between Marcelo and Vinícius contributed to that; when the former advanced with the ball through an inside channel, the latter moved wide to ensure they retained their width and to create potential overloads. Zidane's team also attempted to play directly to Benzema's feet as he withdrew into a deeper position.

They demonstrated a both fluid and flexible positional approach. Benzema drifted wide; Nacho Fernández contributed in the channels. Real also sought to play around Sevilla, via their full-backs continuing to advance and Kroos, Modric and Casemiro sliding passes into the wide channels, and providing a passing option.

During the second half Real targeted playing passes into the spaces between Sevilla's full-backs and central defenders before they could recover their defensive positions. Doing so led to their equalising goal, scored by their substitute Marco Asensio, but Sevilla's compactness, concentration and discipline meant that they remained difficult to break down.

After they again fell behind, Real started playing with increased urgency. The influential Kroos demanded possession from their defenders and used it to play forward directly or carried it forwards and played passes into wide areas. It was his deflected effort that led to their equalising goal, scored by another substitute, Eden Hazard. Sevilla had at times been attempting to defend that lead via a 6-3-1.

Julen Lopetegui retained Sevilla's long-favoured 4-3-3, which on this occasion was led by the front three of Papu Gómez, Lucas Ocampos, and Suso. Their hosts, Real Madrid, defended with a 4-5-1.

Sevilla started by prioritising attacks towards the left, where Marcos Acuña played in an advanced position and combined with Ocampos to create overloads in wide areas. They also demonstrated patience in possession, favouring retaining it over taking risks, and often did so via Fernando Reges withdrawing into a deeper, wider position to provide a consistent passing option.

Sevilla sought to change the point of their attack via their central players. Gómez, similarly, withdrew into central areas to receive passes from those at full-back or in midfield and to tempt opponents to follow him and therfore disrupt Real's shape and create space in behind, and when he did so, Suso and Ocampos made forward runs.

Karim Benzema remained Real's most advanced player. Vinícius Júnior and Federico Valverde withdrew into deeper positions in midfield, so Benzema drifted away from the centre to provide an outlet. If Real were instead attempting to make quick regains in the final third, they did so via a high press they sought to apply before Sevilla could organise themselves.

Sevilla struggled for possession during the first half of the second half, and as a consequence prioritised quickly transitioning into attacks, and using their width to try and create goalscoring chances before Real could react, but too often Real succeeded in quickly withdrawing players to behind the ball. They also attempted to switch play, by drawing Real to one side of the pitch through combinations between Fernando and Joan Jordán, and then playing possession towards the right, where Suso and Jesús Navas offered such potential in the space that existed.

When they were attempting to defend their 2-1 lead they had even less possession. Their entire XI played from  behind the ball, and they therefore struggled to build possession when regains were made.