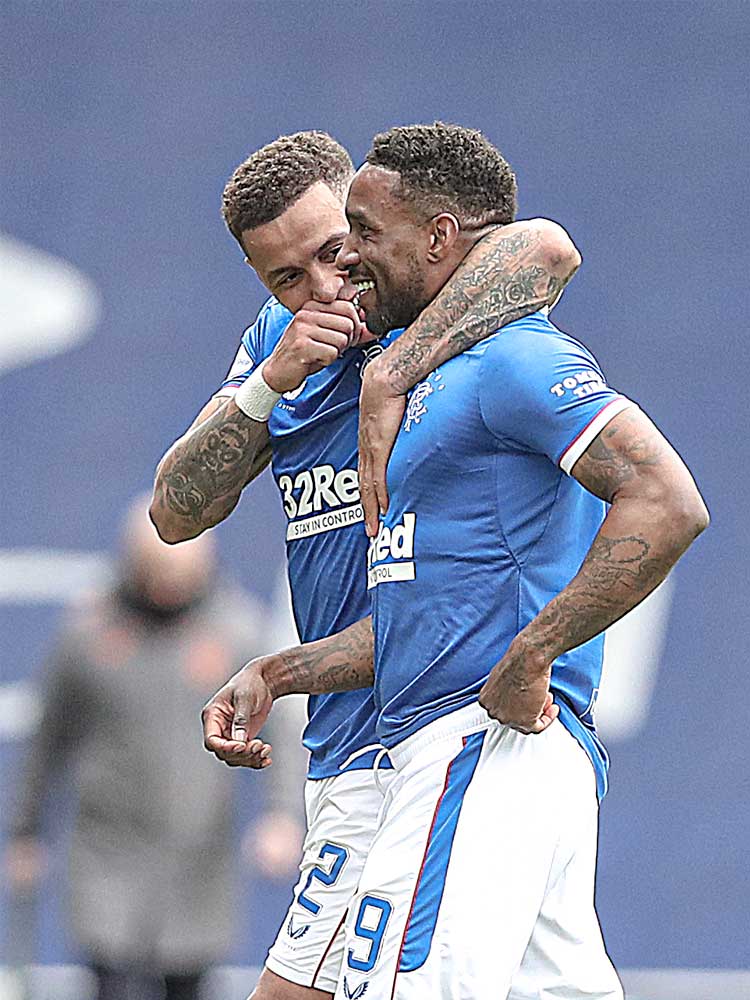 Rangers provided the latest demonstration of their superiority over rivals Celtic when they recorded a convincing victory over them at Ibrox, living them 23 points above them in the Scottish Premiership. Kemar Roofe had just given Rangers the lead when Callum McGregor's severely undermined Celtic's hopes. Odsonne Édouard's equalising goal followed, but Alfredo Morelos restored Rangers' lead, and during the second half, Roofe and substitute Jermain Defoe extended it. "It was a really strong performance," said Rangers' manager Steven Gerrard. "We've ran away with it in the end. (The red card) made it easier. These games are always decided by big moments." Celtic's interim manager John Kennedy said: "Going down to 10 men puts you on the back foot but we managed to create within that. Rangers were more clinical once again but the sending off is the big part of the game."

Rangers were organised by their manager Steven Gerrard into a 4-3-1-2 formation led by the front two of Alfredo Morelos and Kemar Roofe. Their visitors, Celtic, defended with a 4-2-3-1 that also often became a 4-4-2 defensive block.

Gerrard's team struggled to impose themselves during the opening 20 minutes, when their grasp of possession was unconvincing, but  Roofe scoring their opening goal, followed shortly afterwards by Callum McGregor's dismissal, significantly altered the picture of both teams' afternoon. When Rangers sought to build possession, Joe Aribo advanced to alongside Ryan Kent, and their full-backs advanced to provide width.

In creating a central overload when those full-backs were stretching Celtic's structure, Rangers were capable of penetrating through the centre of the pitch; if Celtic became more compact to prevent them doing so, Rangers instead advanced on the outside. Morelos and Roofe were also influential in them doing so, by providing their width on the occasions their full-backs didn't, and in the knowledge that Kent and Aribo would instead provide penetration through the centre of the pitch.

Those attacking players' movements, complemented by those made by Glen Kamara, were fluid, and their changing roles and responsibilities prevented Celtic from settling because of their need to so consistently adjust – Rangers then targeted punishing Celtic in the moments when they struggled to do so. Roofe and Morelos also made penetrative runs in behind the relevant central defender to draw him with them and create space between the lines in which Kent could receive to feet, turn, advance, and attack one-on-one.

After McGregor's dismissal, Celtic defended with a 4-3-2 in which James Forrest advanced to alongside Odsonne Édouard, and Mohamed Elyounoussi tucked in alongside David Turnbull and Scott Brown. Turnbull had previously joined Édouard in attempting to press Rangers' central defenders and monitor Steven Davis to prevent potential underloads, Forrest and Elyounoussi moved to press their opposing full-backs, and Brown and McGregor shuffled across to negate passes between the lines and restrict access to Aribo and Kamara.

Rangers' control increased during the second half, when they increasingly circulated possession but played at a reduced tempo. By doing so they continued to stretch Celtic and wear them down, and therefore increased the likelihood of creating spaces through which they could attack.

Celtic's interim manager John Kennedy selected a 4-2-3-1 formation led by Odsonne Édouard. Their opponents, Rangers, reorganised to defend with a 4-3-3.

Their start involved some promising spells of possession that contributed to them posing an attacking threat. Against that, Rangers retained a narrow structure in which Ryan Kent, Alfredo Morelos and Kemar Roofe sought to limit access into Scott Brown and Callum McGregor, so Celtic targeted creating overloads in wide areas. Mohamed Elyounoussi and James Forrest often moved infield to encourage Jonjoe Kenny and Greg Taylor to advance from full-back, and to create potential two-on-ones against their opposite numbers.

When possession travelled wide in midfiled, McGregor or Brown attempted to advance to offer an additional passing option infield; McGregor was particularly effective at doing so, via a blindside run, during the opening 20 minutes. A further approach involved Kristoffer Ajer advancing with possession, or even continuing to run forwards after releasing the ball, to as far as Rangers' penalty area in an attempt to finish their attacks. Rangers' uncertainty in how to negate him contributed to midfielders being drawn towards him until he played the ball, and him then going untracked after he did, but after McGregor's red card it became unrealistic for him to do so.

Once they were consigned to playing with 10 men, Celtic prioritised playing longer passes in behind for Édouard to pursue, and therefore to target gaining territory and potentially win set-pieces in the attacking half. They also continued to favour the give-and-gos with which they were previously succeeding.

The final score ultimately did their efforts, once reduced to 10, little justice. The goals they conceded weren't a result of them being exposed tactically – the fourth, particularly, came because they were fatigued.