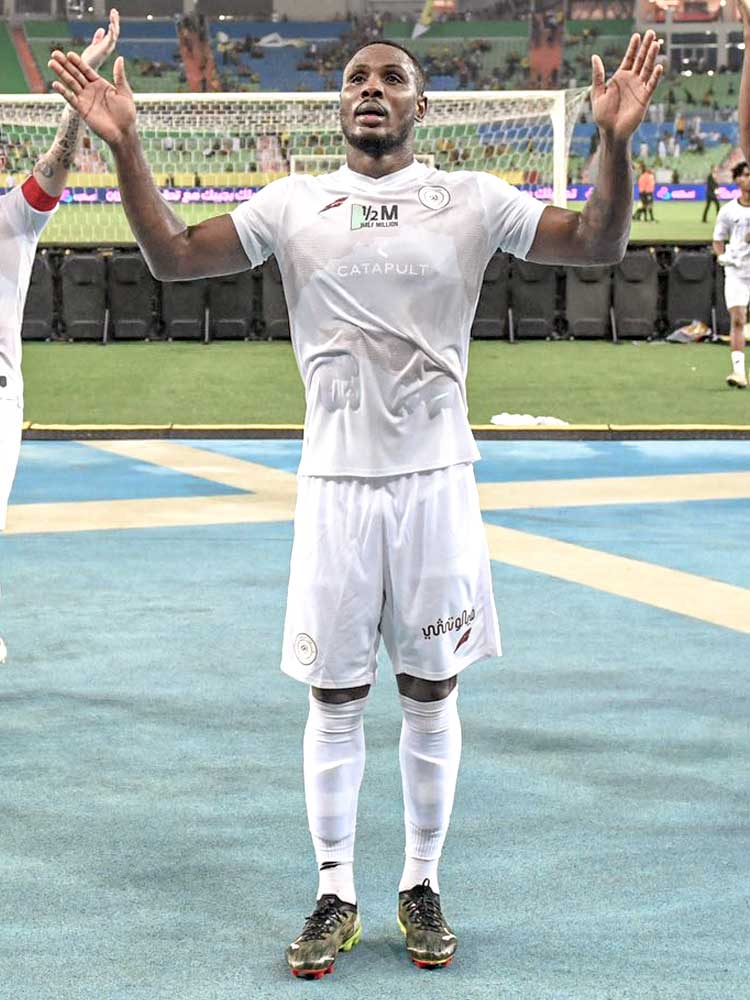 Profile
After so unexpectedly spending a year on loan at Manchester United from Shanghai Shenhua, Saudi Arabia's Al Shabab became, on a permanent basis, Odion Ighalo's next destination. As a peripheral figure at United he scored five goals in 23 appearances; in Riyadh, alongside Éver Banega, he has become essential to Al Shabab's ambitions.

Aged 31 when he joined them in February 2021, he left Manchester with the admiration of Ole Gunnar Solskjaer, the manager who recruited him but who soon struggled to justify his selection given the intense competition for places that existed after the arrival of Edinson Cavani. "He did really well up until the summer," Solskjaer said of the one-time Watford striker. "This season he’s not had as many opportunities but he’s never let himself down as a professional and a human being."

Tactical analysis
On the occasions he played for United, Ighalo featured as the central striker in a 4-2-3-1 formation (below). In United's highest-profile fixtures Solskjaer favoured a 5-3-2 while out of possession and a 3-4-1-2 with it, and the striker therefore played fewer minutes than he might have hoped.

When featuring as a lone striker Ighalo favours receiving possession to feet and making runs in behind. When the ball is in central areas or half-spaces, and there is pressure on his in-possession teammates, he attempts to position himself for passes to feet; if there is no pressure on the ball carrier, he will instead offer movements in behind. He offers intelligent movements away from opposing defenders. When possession advances beyond midfield he takes a diagonal step away from it before pulling on to the blindside of the furthest central defender when two are positioned closely together – or the nearest one when there is a significant space between them.

When teammates play possession into central areas, Ighalo makes short, sharp movements in an attempt to deceive defenders who prefer to simultaneously monitor both the attacker and the ball. If he is behind possession he will then prioritise moving into the penalty area at a late stage, to position himself for rebounds or cut-backs. If one of Ighalo's strengths is his ability to protect possession and then bring others into play, he does so by backing into opponents to control long, direct passes, instead of pursuing flick-ons. He is deceptively strong and, once the ball is under control, able to hold off defenders, often by using his arm to keep his opponents at the necessary distance before locating a teammate to link with.

It is those qualities that have made him suitable in the latter stages of fixtures when the priority is to protect a lead. He retains possession in advanced territory, drawing fouls, and effectively undermining an opponent's attempts to build an attacking threat. When his team is without possession, Ighalo, similarly, is capable of offering a significant amount of energy, often through pressuring opposing goalkeepers and defenders and in the recovery runs he makes, or when pursuing the ball after losses of possession. If that encourages intensity from his teammates and can lead to mistakes from opponents, he regardless needs to show a greater awareness of the spaces he vacates.

Role at Al Shabab
Ighalo consistently features as the central striker in Al Shabab's 4-2-3-1, and remains in that position if they adopt a different shape – such as the 4-1-4-1 they also occasionally use if they believe their opposition demands it. His dynamism and forward runs regularly test opposing defenders via their body shapes and balance being manipulated; Ighalo favours playing on the outside shoulder of those defenders, and then using movements to create space to rapidly move into.

While his priority is to provide an attacking threat from the final third he remains willing to withdraw into central territory to enhance their potential at transitions, potentially by making regains and creating space for his teammates to attack into. When he does so he minimises the number of touches he takes to instead link play at speed.

It is Ighalo's change of pace that contributes to how effective he can be further forwards. When receiving possession from a midfield teammate against disorganised opponents he uses it to capitalise on that disorganisation, regardless of whether receiving direct or shorter-range passes or to either his left or right foot. When defending against him one-on-one defenders can be seen attempting to delay and slow his forward movements to instead secure time for their teammates to recover their defensive positions and potentially create an overload against him. The central and wide midfielders behind Ighalo therefore work to create clear passing lines (above) that mean he can change their point of attack.

The same intelligence he applies to his body shape and movement exists when he adopts positions in an opposing defender's blind spot so that he is beyond their line of sight, and ultimately ready to pursue through balls played across and in behind that defender.

When he is required to defend, Ighalo is selfless, and shows desire in his attempts to make regains. When an opponent's tempo slows or they take a touch that doesn't protect the ball, Ighalo uses his speed to attempt to win it and then play it into the teammates advancing to build on his regain – potentially by creating overloads against a retreating defence. He, similarly, is responsive to triggers (above) – perhaps slow play or a poor first touch – that are followed by a regain being made and a counter launched.

Those in Al Shabab's 4-2-3-1 are instructed to create space and to play through both wide and central territory. Their full-backs regularly advance, creating the potential for through balls to be played into the channels and for crosses to be directed to where, in the centre, Ighalo most thrives. To that end, the striker often delays his runs into the penalty area so that when he moves he does so into space in behind the opposition's defence – often doing so when teammates have made runs in response to him delaying, and therefore stretched their opponents further.