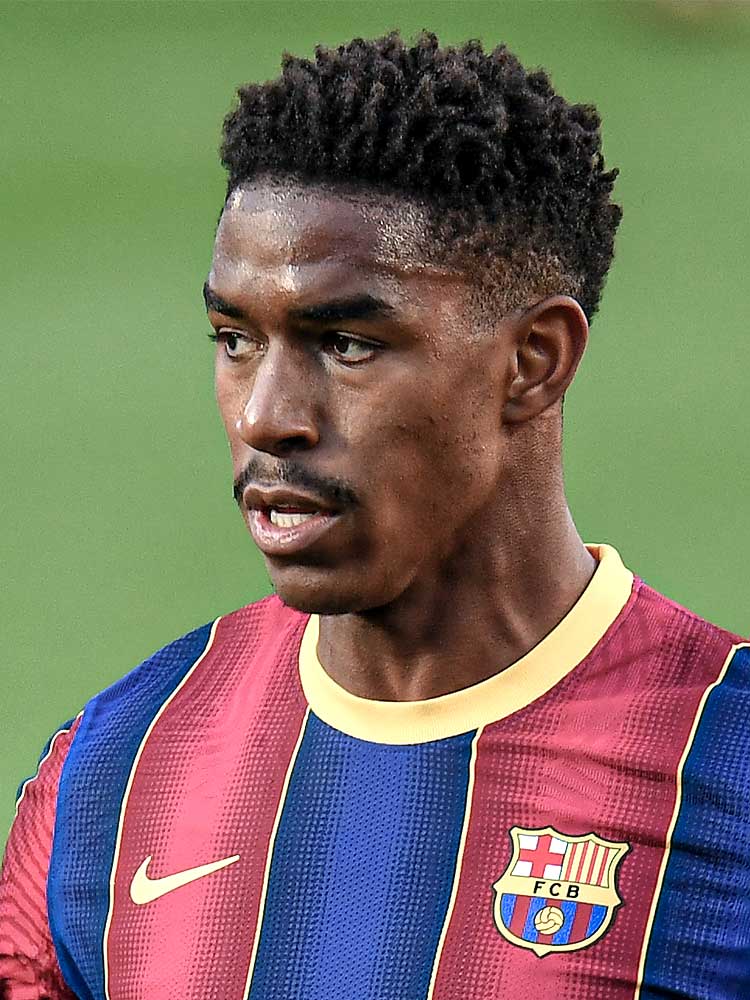 Profile
It is sign of Leeds' and Marcelo Bielsa's sway that Junior Firpo, who has long appeared  suited to Barcelona's style of play, was tempted to Elland Road for what are expected to be his best years. Aged 24 when he moved for a fee of £13m in July 2021, he will add to the impressive collection of Latin players already established in Bielsa's plans.

"I know the coach that he is, and for me he is a really good coach," said Firpo upon signing a four-year contract that means Barça retain a 20 per cent sell-on clause. "He wants to press all the time, play one against one many times, and that's my football. Physical football, running, having the ball, for me it's not a problem and he will help me go to another level."

Tactical analysis
The left-footed Firpo is as proven at left-back in a back four as he as a wing-back ahead of three central defenders. He offers significant potential when defending during moments of transition, particularly in the recovery runs he is capable of making (below). His acceleration is as impressive as his ability to sprint over extended distances, and is complemented by his quick reactions that make him capable of spotting turnovers as they happen, and therefore of reacting before the ball carrier can build momentum.

Once he has recovered his defensive position, Firpo is then strong at duelling for possession,  when he can press and steal the ball from the side of an opponent without conceding free-kicks. It is when defending one-on-one, front on, when he is less effective, particularly if required to do so from inside his team's defensive third. He can struggle against opponents attempting to cross into the penalty area, not least those who favour attacking around him, and, though he can efficiently delay and jockey, he too often proves incapable of preventing crosses, even on his stronger left side.  It is when opponents cut infield to instead create an opportunity to shoot at goal that he is more effective, and to the extent he often blocks or intercepts their efforts.

Regardless of whether he is selected at full-back or wing-back, Firpo's positioning is extremely aggressive, owing to his knowledge of his ability to make those recovery runs. When his teammates move infield his forward runs are also more effective, because of the freedom them doing so gives him to drive forwards with the ball, or to receive under reduced pressure.

When he then reaches advanced positions, he prioritises delivering crosses to those making runs (below), usually via striking through the centre of the ball and similarly to executing a pass, instead of whipping the ball to his desired target. From his teammates' perspective, his deliveries across them, or cut-back to them, are therefore easier to finish from.

It is when confronted with compact defensive blocks that those same deliveries only succeed in reaching those making runs towards the near post; if they make it as far as those at the far post it is because defenders have missed the ball or teammates have successfully deceived defenders via a dummy. If he can improve his aerial deliveries to the extent they are both more accurate and better timed, he will be capable of attacking with an increased range, and be more effective from advanced territory.

His passing range and movements are often dictated by the starting role he is given, but Firpo is demonstrating an increased understanding of the need to vary his positioning in relation to his teammates, and to the extent he makes intelligent, well-timed runs to create space for others. His runs remain relatively direct, but they succeed in forcing opponents into deeper territory, and therefore create increased space between the lines. That he complements that by remaining composed when receiving under pressure and playing out from defence, and is aware of when to penetrate forwards via a pass or dribble or when to be patient and perhaps recycle possession, furthers his effectiveness.

Role at Barcelona
Firpo's primary role throughout 2020/21 was to provide cover for Jordi Alba, but there were also occasions when he was used towards the right. Ronald Koeman's preference for a back three meant that Firpo was encouraged to advance from wing-back (above), and to the extent that he could receive possession alongside Barça's most advanced players, and capitalise on doing so by combining effectively with his closest inside forward or, if a front two had been favoured, one withdrawing into a deeper position.

From that advanced position his responsibility to provide their attacking width meant that he had less need to wait for his teammates to move infield before he pushed forwards, and that there were therefore often occasions when he could take advantage of space in behind opposing defences by crossing at an earlier stage of an attack, when his low deliveries complemented those making runs through the centre of the pitch. Those movements from wing-back were regularly encouraged by direct passes played from Barça's wider central defenders as they stepped into midfield through the inside channels and Firpo ran beyond the outside shoulder of his opposing full-back to progress in behind before combining with a runner. Frenkie de Jong's ability to dribble out of the defensive third also complemented him, but via passes instead being played into his feet. The presence of three central defenders regardless meant that there were times when recovery runs were less necessary, and that even when they were, he had increased time to make them.

When Barça were instead organised into their more traditional 4-3-3, Firpo featured as an overlapping left-back (above), and one instructed to make an increased number of runs and movements before receiving the ball. He regularly stretched the pitch by running in behind, and therefore creating increased space for Lionel Messi, Antoine Griezmann, Pedri and more. Those same movements also forced his opposing full-back into deeper territory, and regularly drew his opposing wide midfielder with him.

It was when featuring as a full-back that Firpo enhanced his output by also moving to combine infield, in addition to making forward runs to receive in wide positions from which to cross. He had a greater influence on attacks being built, as well as being the one to provide the final ball across goal, and did so with the necessary awareness that meant his movements complemented those of the closest forward and central midfielder – most commonly Griezmann and Pedri – and to the extent he also occasionally provided underlapping runs.

At full-back the value of his ability to make recovery runs and to defend during moments of transition was also enhanced. Successful duels and regains made from attempts to counter-press preserved Barça's attacking momentum. It was in a more compact block that Firpo's deeper defending (above), particularly when defending in wide territory with little support, was more likely to be exposed.

His stance and body shape in those moments is mostly good, but Firpo continued to leave too big a space between himself and the ball. By extension, his opponent was too often given the space required to move and then cross the ball which, without support, Firpo would struggle to block.