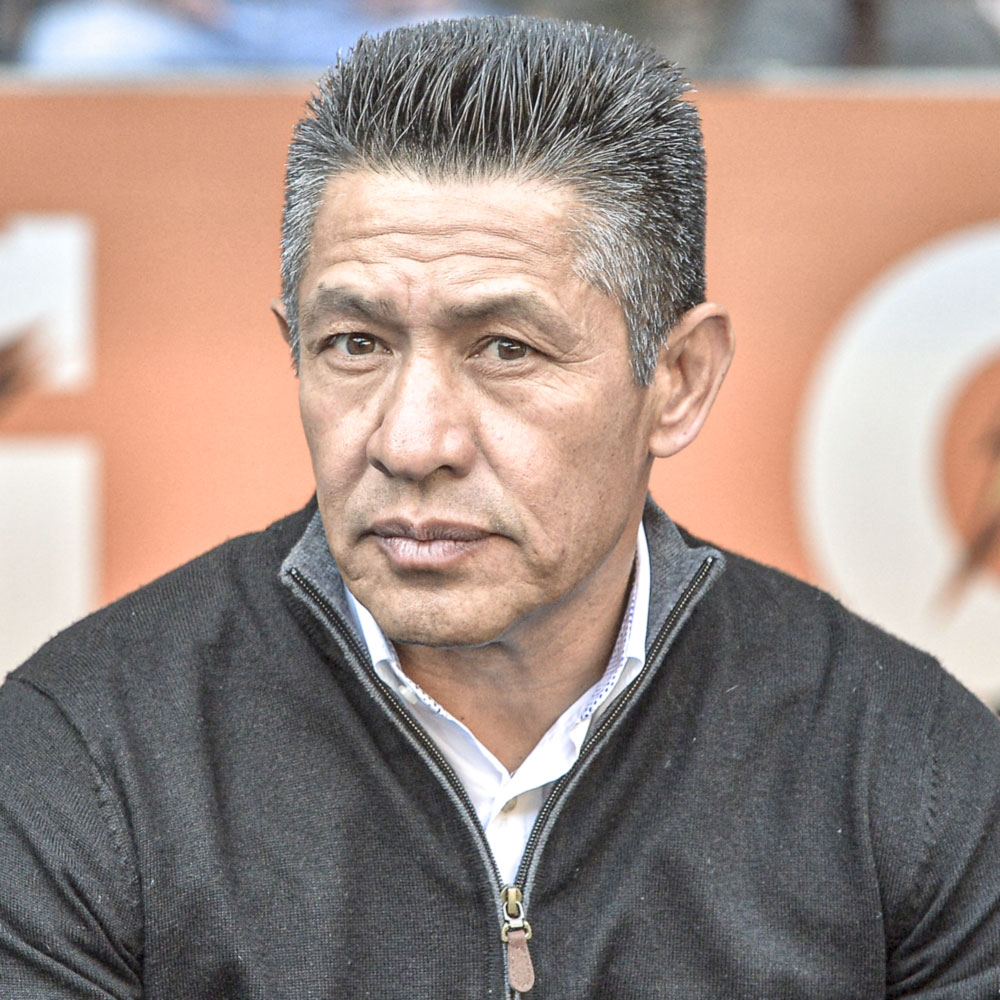 When my playing career was coming to an end, I wanted to become a sporting director.

I was interested in getting a better understanding of how directors and club owners think.

Near the end of my last season as a player with Necaxa, I got a call from Javier Aguirre (below) to see if I would be interested in helping him with the Mexico national team.

My background as a midfielder, where you are always trying to bring order to the team, had helped me develop a commanding voice on the pitch. Coaches would give instructions to me to communicate to my teammates.

I went to talk to Javier and we had a discussion. “Forget about playing once and for all, and just come and help me with the national team,” was the first thing he said.

But I couldn’t get my head round that idea just yet. I wanted to keep playing. I pointed out I was taking all the coaching courses – but, as I mentioned, I was thinking of becoming a director of football. I wanted to focus on improving the lines of communication between players, coaches and directors.

“Nacho, I really can’t picture you doing that,” he said bluntly. “You are the kind of guy who belongs on the pitch.”

According to him, I am rough around the edges, very dry, and was just going to get into a lot of arguments. “You’re better off arguing with the players, and you know how to do that already.”

I didn’t really pay much attention to him then. But later, when I was already involved with the national team, I asked him if that was the purpose of my retirement. He said that, now that I knew what it was all about, he needed me to start travelling, preparing reports and understanding what he needed. That changed everything for me.

When I started to understand different ways of playing and how to work on the pitch, I realised Javier had been right. I belonged there – on the pitch.

Once our stint in the national team was over, I was hired by Puebla, to try to avoid relegation – and we made it.

Although things went my way, I thought I still had more of a player’s mentality than that of a coach. I would tell myself that I wasn’t ready yet, so I decided to travel to educate myself.

I went to Spain to watch Osasuna. They were trying to avoid relegation, and Javier Aguirre was already in charge.

I saw two games. The team stayed up, and then Javier and I met for dinner in Madrid. I told him then that I didn’t feel I was ready to be a manager. I told him why, what the mistakes were I thought I’d made, and how I’d argued with the directors – just as I used to as a player.

“There might be a chance for you to come to Spain to work with me,” he said.

He was testing me when he handed me his computer and asked me for a full report about what I thought Osasuna was missing, and which players should be signed. I watched all the team’s games from that season, and a lot of other Liga games, and also looked at players.

I had had some experience doing that type of work for Javier before – the type of analysis he liked. With the national team I once prepared a hefty report, almost like half a book. I showed it to the assistant coach, Guillermo Vázquez, who tore it apart as soon as he saw it.

“If you give this to Javier, he will be bored to death by the second page,” he said. “Just two sheets will be enough – a summary for attack, another for defence, and a final comment.”

I then knew what he wanted to see at Osasuna. Three sheets to summarise a whole season.

I joined Javier’s staff. I went to Spain and stayed there for six years.

We got on with the fans and the city of Pamplona. Javier’s personality had a lot to do with it. He gets along with players; he turns the dressing room into a family.

He was settled in the city as if he were a local, and would chat to everybody. He knew the place very well, since he had been a player there, too. He earned people’s love, and when you add good results to that you’ve got a great fan base. Javier is a very straightforward guy.

"aguero was 17 years old. He was small, and he didn't talk much"

In the last season, the team qualified for the Champions League. We finished fourth in La Liga – an outstanding achievement for Osasuna. In the celebrations, Javier hugged me and said: “I think we are going to have to leave.”

I asked him where, if we were doing very well where we were. “I’ll tell you in a couple of days.”

After that, he told me he was in talks with Atlético Madrid and that it seemed we were going there. He said he would confirm everything in three days.

We had dinner, and he asked me for a report on the team. He also told me the date we’d start at the new club.

We left Osasuna, and took on a new challenge. Atlético Madrid had not been in any European competitions for years.

I will never forget the first press conference. He announced that we would fight for a place in Europe, and when I picked him up on it he said: “What do you want me to say? That we’ll fight to avoid relegation?”

"i am very pleased fernando torres is starting to coach"

It was a team with very good players: Leo Franco, Pablo Ibáñez, Antonio López, Amaranto Perea, Gabi, Fernando Torres, Maxi Rodríguez. However, they didn’t seem to have reached their potential. In a way, they seemed to carry not qualifying for Europe like a weight of responsibility.

That season, Sergio Agüero (above) came. He was 17 years old. He was small, and didn’t talk much in the dressing room. When Javier saw him playing, he told me: “This one doesn’t know a thing.” He wanted to send him to the youth team, and I committed to training him.

Kun, as we called him, would tell me: “Just leave me up high, get the ball up to me and I’ll do the rest.” This is pretty much what he had been doing at Independiente, back in Argentina. I explained to him that in Spain it wouldn’t work if he didn’t run.

We worked with Torres (above). I have great respect for him. He is a great player and a great person. It was incredible to be with him, and I am very pleased he is getting started as a coach.

The three of us worked together, co-ordinating drills on certain movements. I would show them videos to explain to them what Javier was trying to get out of them.

Javier and I were aware of how difficult that break was, and we had a complicated January. Knocked out of the Copa del Rey by Barcelona, and then one hit after another in La Liga. It felt like we just couldn’t play comfortably again.

We tried everything to change the dynamics. We tried rotations. Another Mexican coach came in to give us a hand, but it didn’t work. In those sorts of situations, you just can’t figure out what’s stopped working. We tried a different system but we didn’t manage to get a single draw.

We lost five out of five matches that month, and this is a game of results. That cost Javier his job. His staff, too.

After working for him for seven years, I understood that the time had come to find my own way. He went back to the national side after a couple of months, and I stayed in Europe because my children were studying.

I was living between Madrid and Barcelona. I have a close relationship with Rafa Márquez, so I spent those six months close to Barcelona, watching them train and watching them play Champions League matches.

Then my children finished school, and late in 2009 I went back to Mexico.

I was ready to be a manager, to be the one getting the criticism. But that’s how it is. It is harder to be a manager. When you are a player, you don’t get fired when you lose. It’s different as a coach. Especially in Mexico, where you sign a four-year contract and they kick you out after five games.

You have to be prepared for all that, and also to work with great players. One of them was Ronaldinho (above), at Querétaro.

When I learned he might be coming to the club, I called Márquez to ask him how best to deal with him. He said just to treat him like he is. “Ronnie is very easygoing, not like a star at all,” he told me.

He warned me, though, that if there was anything I wanted to tell him, it was best to be up front. “If you have to tell him something is wrong, just tell him up front.”

When Ronaldinho arrived, I told him in our first conversation that I had spoken to Rafa. I told him that Mexican football was different to what he was used to. Sometimes you play at altitude, and then other games at sea level. We run a lot. Sometimes we play at noon, sometimes in the afternoon, other times in the evenings. There are fewer touches on the ball; it’s more dynamic.

“Yes, don’t worry,” he said. Then I told him that I wasn’t afraid of his reputation for partying, but that he should try to keep a lower profile out of respect for the team. He said the same: “Yes, don’t worry!”

He liked that I spoke to him like that – one man to another, like Rafa had told me, and we had a great relationship. We had many conversations, but I remember one in particular.

He asked me: “Coach why don’t we train at 7pm instead? I train better at that time.” But I said that we would train at 10am, and it wasn’t going to change.

He had a tremendous impact on the team – a player of that magnitude – and on the players themselves. Once, he asked me to tell the rest of the team not to ask him to sign so many shirts.

He tried very hard. Things didn’t turn out so well, and I had to leave because of the results – but the team still played a cup final and a league final in my time there.

Nowadays, there are things that you just feel after 10 years of work, because of experience. I was lucky at León, to see what I had in my mind being played out on the pitch. First I have to convince human beings, and then convince the players, because football players have special egos. The main thing is the commitment that comes from the players themselves.

I’ve always insisted that people will cheer for you if you give your all on the pitch. If you’re only half-hearted, it’s harder. We always say that we live or die by the goalline. To play well but still lose is not much help.

I was allowed to make decisions at the club. The directors supported me and I had a great relationship with them. Today, I see football in a much clearer way and try to get that across to my players in the easiest way for them to understand.

I’m at a great point in my career professionally. I love football. It has given me everything. But I also understand that as a career path, it’s a bit like the wheel of fortune.