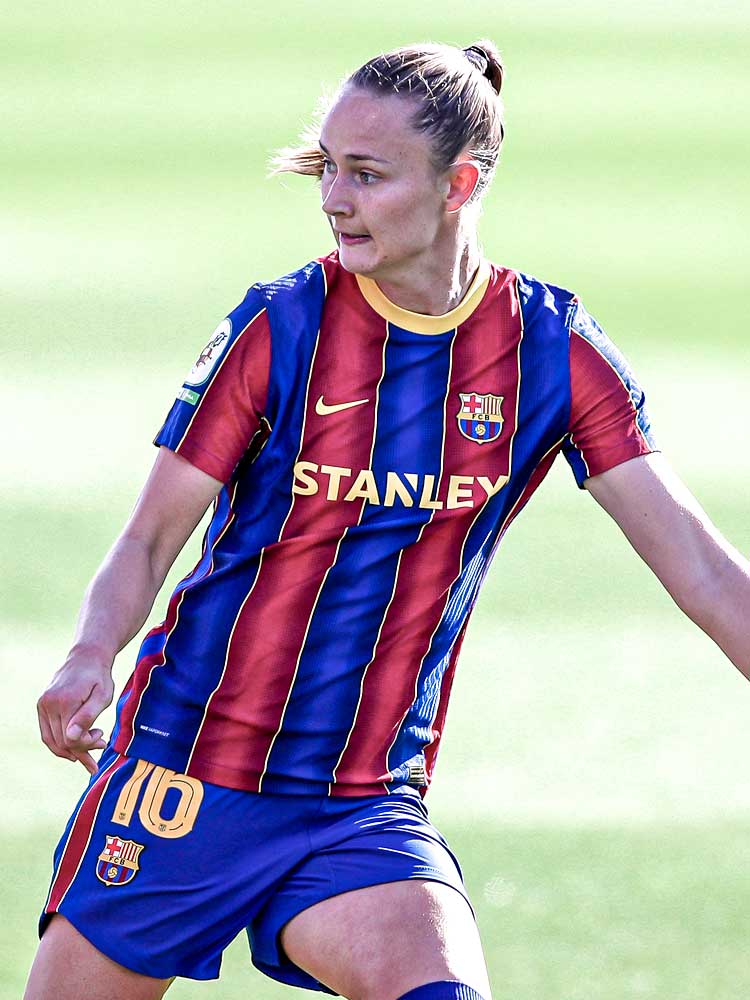 Profile
Caroline Graham Hansen had been at Barcelona for less than two years when they moved to extend her contract by two more. In her first 39 appearances following her transfer from Wolfsburg, she had scored 16 goals, and won a league title, Spanish Cup, and Catalan Cup.

By the conclusion of 2020/21 – three years after injuries led to her considering retirement – she had rewarded them by helping to deliver the Champions League. "When you then win the Champions League three years later in the way we did, it makes all the hours you put down really worth it," said Graham Hansen, 26 at the time of that triumph. "It's also a motivation to just keep going, no matter what happens."

Tactical analysis
Graham Hansen is both a versatile forward and one of the finest players in the world. She is proven in central roles behind the leading attacker or as that leading attacker, and when playing from the right.

She most stands out for her consistently accurate distribution; when delivering crosses from the right she can do so with significant variety, which can mean her driving the ball into the feet of her teammates as often as she plays aerial balls into the path of their runs or executes cut-backs (below). Such is her ability that she mostly crosses from the outside channels instead of advancing into the penalty area to do so, and succeeds in creating goalscoring chances and goals.

With the ball at her feet, Graham Hansen just as consistently demonstrates confidence. She moves the ball, and her body weight from left to right, in an attempt to test her opponent’s balance and potentially create space to the side of that opponent before driving into it; in the moments before she is the one receiving the ball she adopts an open body position and seeks to control with her favoured right foot and potentially move it into space. That her movement is dynamic and that she can play off of so few touches complements that positivity, and contributes to her also being capable of retaining possession while under pressure, or drawing fouls.

When, similarly, she is attacking one-on-one, her variety is essential to how effective she can be. If the relevant attack is unfolding at a slower pace, and her opponent is attempting to delay her, Graham Hansen steps over the ball, shifts her body weight to her left and uses her right foot to play forwards into space; if she is already capable of running at her opponent with pace (below) she favours playing it past them and then using her speed to race beyond them and recover it. Breaking lines with her speed or moving into the channels to combine with teammates, should she then release the ball to a teammate as that teammate drifts wide, she then seeks to advance to between full-back and central defender.

That same attacking threat extends to when she is shooting at goal, when even with limited space she generates power from a short backlift, having prepared the desired space by scanning ahead of receiving the ball and therefore built the awareness of her surroundings required to make decisions with speed and deny her opponents the chance to close her down and deprive her of that space (below). If the ball is in the air and she is outnumbered, she seeks to use her body shape and strength to protect it – often stepping across her opponent’s body – and retain it until her teammates can support.

When she is required to defend, she willingly supports her defensive teammates, and plays with patience to, particularly, screen opponents’ options. Her determination to win the ball can, regardless, lead to her committing fouls, particularly when her opponent is the one using their body to protect the ball. When her opponents are physically superior, she struggles to dispossess them.

Role at Barcelona
Graham Hansen plays from the right of what is most commonly Barça’s 4-3-3, from where she makes herself available to regularly receive the ball in the outside channels and creates numerous goalscoring chances. When receiving the ball wide on the right, she seeks to contribute to the creation of overloads against her opposing left-back.

That she features where she does has contributed to the development of potent understandings with Jennifer Hermoso, Aitana Bonmatí, and Marta Torrejón, respectively their leading striker, right-sided central midfielder, and right-back. Bonmatí and Torrejón regularly seek to play possession ahead of Graham Hansen for her to run on to; Graham Hansen, in turn, seeks to play into Hermoso’s feet. When Barça’s attacks are developing, she retains a wide position outside of her opposing full-back in an attempt to stretch their defensive line and be difficult to mark, and to encourage, with Torrejon, overloads.

When she releases the ball to a teammate, Graham Hansen seeks to support them either by remaining wide or, if it is played further towards the left, drifting infield and therefore maintaining Barça’s aggressive attacking shape. It is from the centre that she has an increased number of chances to shoot on goal – having made herself available to receive while under pressure – and therefore use her favoured method of shooting across the goalkeeper and towards the far post, or to play penetrative, forward passes. Her forward movements from either central or wide territory are timed so that she can run on to the passes being played (above).

Graham Hansen’s technical prowess extends to her regularly taking Barca’s corners, and the variety she offers at set-pieces. She impressively curls the ball into the penalty area but out of reach of the opposing goalkeeper, or drives the ball into the feet of those teammates towards its edge. She is responsible for creating numerous goalscoring chances for her team, and is particularly suited to their attacking style.