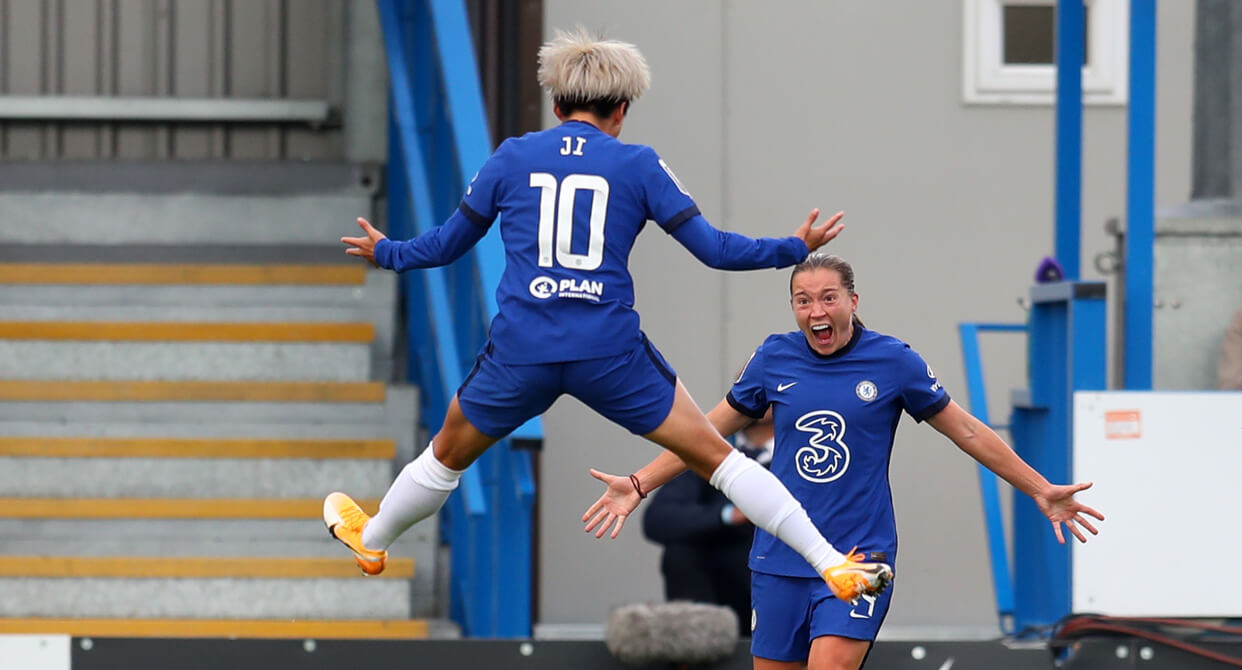 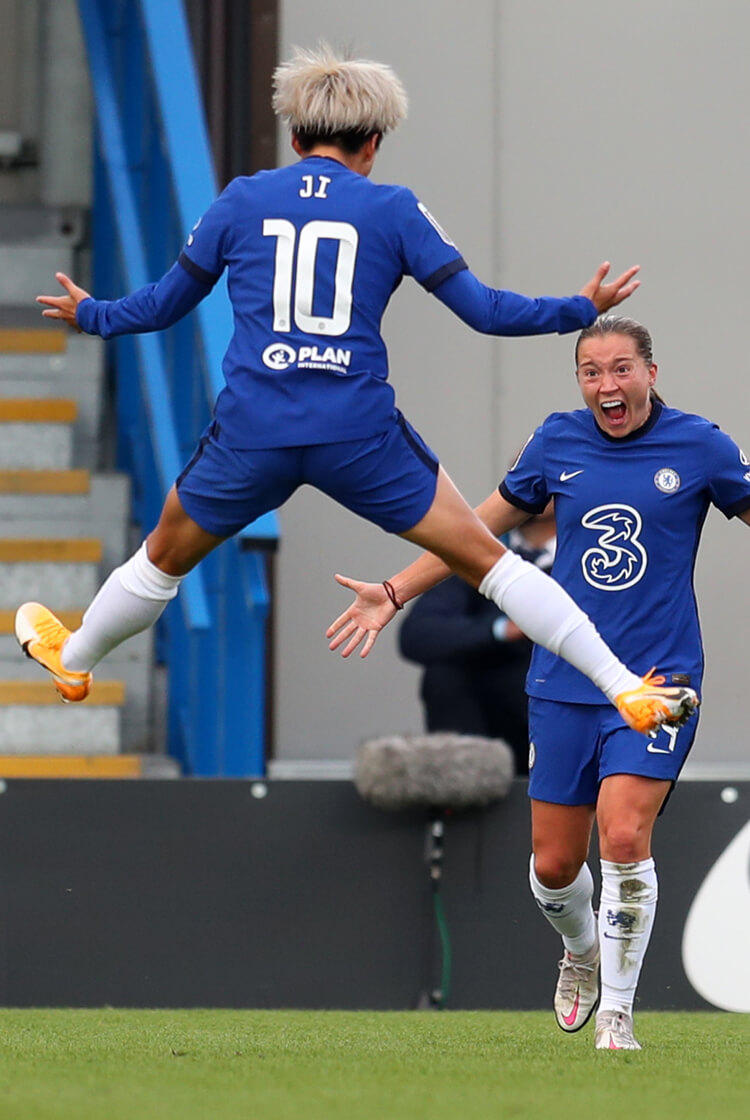 Chelsea Women kept up the pressure on early-season pacesetters Arsenal and Everton with a decisive home win over rivals Manchester City. The defending WSL champions dropped points against Manchester United in their first game of the new season, but made it three league wins in a row with this victory. City midfielder Sam Mewis hit the post midway through the first half, but the hosts went ahead through a contested penalty 10 minutes later, Maren Mjelde sliding home after the referee adjudged Ellen White to have handled in the area. Fran Kirby squared for Sam Kerr to double the lead early in the second half, before Chloe Kelly pulled one back for the visitors from the penalty spot after another handball decision. England international Kirby had the final say for Emma Hayes' team, however, racing through and rounding Ellie Roebuck to secure the three points. 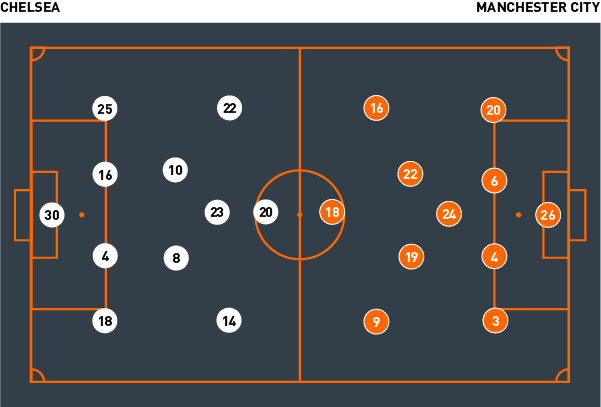 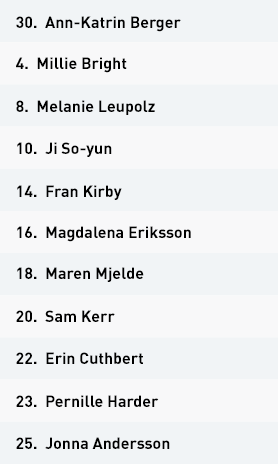 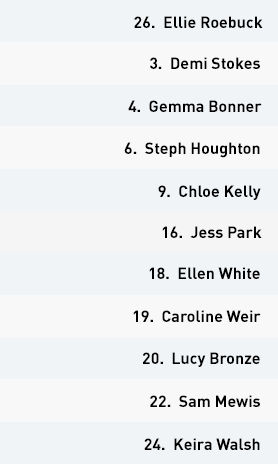 Chelsea head coach Emma Hayes set her team up in a 4-2-1-3 formation, with a front three consisting of Erin Cuthbert, Fran Kirby and central striker Sam Kerr. From early in the game, they looked to create overloads against the Manchester City defence – especially on their left-hand side, where Cuthbert often moved inside to create space out wide for left-back Jonna Andersson to attack.

Central midfielder and playmaker Ji Soy-un covered a significant amount of distance between the penalty areas throughout the 90 minutes. At times, she dropped to act as a pivot for the defensive unit to build through; at others, she pushed forward to operate as a number 10 supporting the play, movement and aggressiveness of the attacking line.

When in possession in the defensive third, Chelsea looked to build patiently, with full-backs Andersson and Maren Mjelde adopting high and wide positions. They were quick to settle after an intense start to the game, taking time to play back and across the pitch in an attempt to draw the Manchester City players on to them. When under significant pressure, however, they weren’t afraid to play more direct balls – mostly through powerful centre-back Millie Bright.


A penalty from Mjelde gave the hosts a half-time lead, and in the second half they played with more explosive runs from midfield areas. Ji and Kirby in particular often looked to combine and exploit gaps between the Manchester City centre-backs and full-backs with regular penetrative passing. A clear example of this led to Chelsea’s second goal, with a pass from deep unbalancing the Manchester City defence and creating space for Kirby to cross and Kerr to finish.

Ultimately, the high-intensity press from the Chelsea front line forced City into areas where they looked uncomfortable and struggling to play forward with any consistent quality. The press was executed with sideways movements and supported by Cuthbert and Kirby adopting positions in the inside channels.

The three points were secured late in the game, as the visitors pushed for an equaliser and left spaces in behind for the hosts to exploit. Kirby capped off a fine display with a run into this space, before rounding the advancing City keeper Ellie Roebuck and sliding home her team’s third.

Manchester City Women manager Gareth Taylor set his team up in a 4-1-2-3 formation, with central striker Ellen White supported by wide attackers Jess Park and Chloe Kelly, and England international Keira Walsh acting as the pivot at the base of the midfield. The visitors attempted to exploit spaces in Chelsea’s midfield unit with powerful and intelligent running; Kelly in particular endeavoured to commit opponents with consistent forward runs with the ball throughout the first 15 minutes.

As the game developed, City were patient in possession and took time to try and build the attack. Inside midfielders Caroline Weir and Sam Mewis both looked to make penetrative underlapping runs in the inside channels; here they could receive from Park and Kelly, both of whom regularly dropped deep to receive from the back line.

Their strategy of playing with depth when in possession was often hard to execute effectively against the Chelsea high press, however – especially when Walsh was marked tightly by the relentless Ji Soy-un.


In the second half, and a goal down, City were keen to step in front of Chelsea players to win possession when the ball was travelling through midfield – but their early high press proved ineffective, with central forward White too often isolated and pressing alone.

Having conceded a second early in the second half, the visitors pulled one back from Kelly’s well-taken penalty. Chasing an equaliser, they became even more aggressive out of possession and committed more players into high positions, forcing Chelsea to play backwards and disrupting their possession. When they did win possession, full-backs Demi Stokes and Lucy Bronze played higher and at times looked to make overlapping runs in much more advanced areas.

They were unable to find an equaliser, though, and ultimately paid the price for their aggressive late approach when conceding a third on the counter-attack.