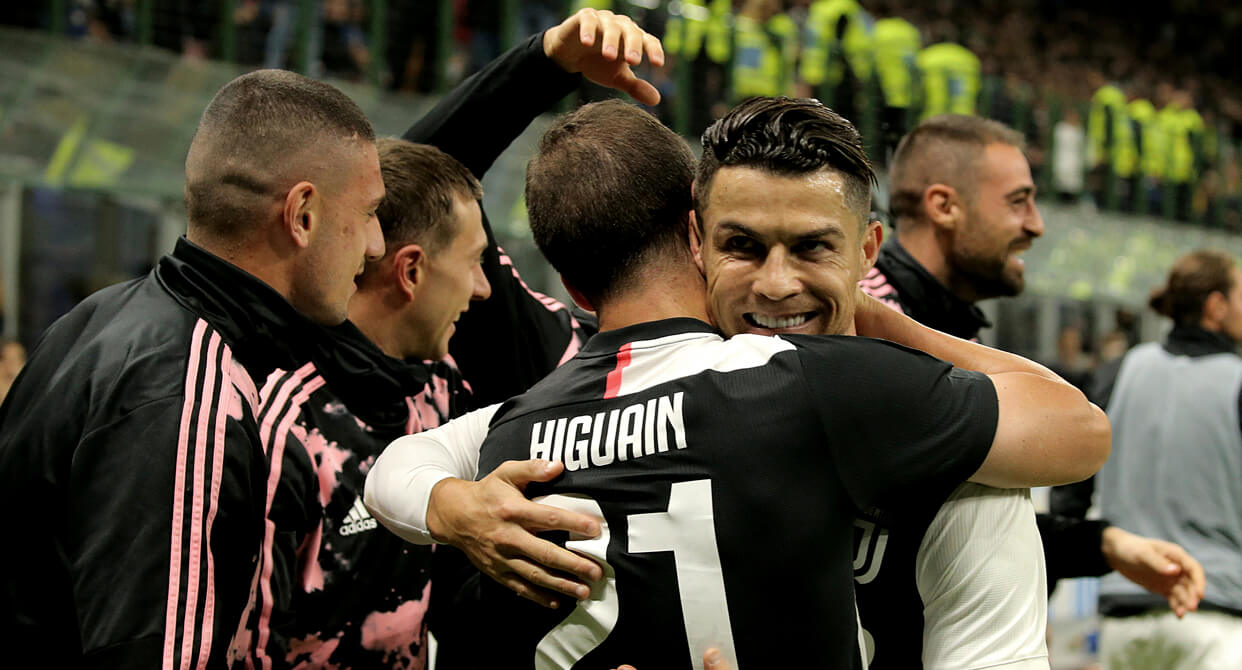 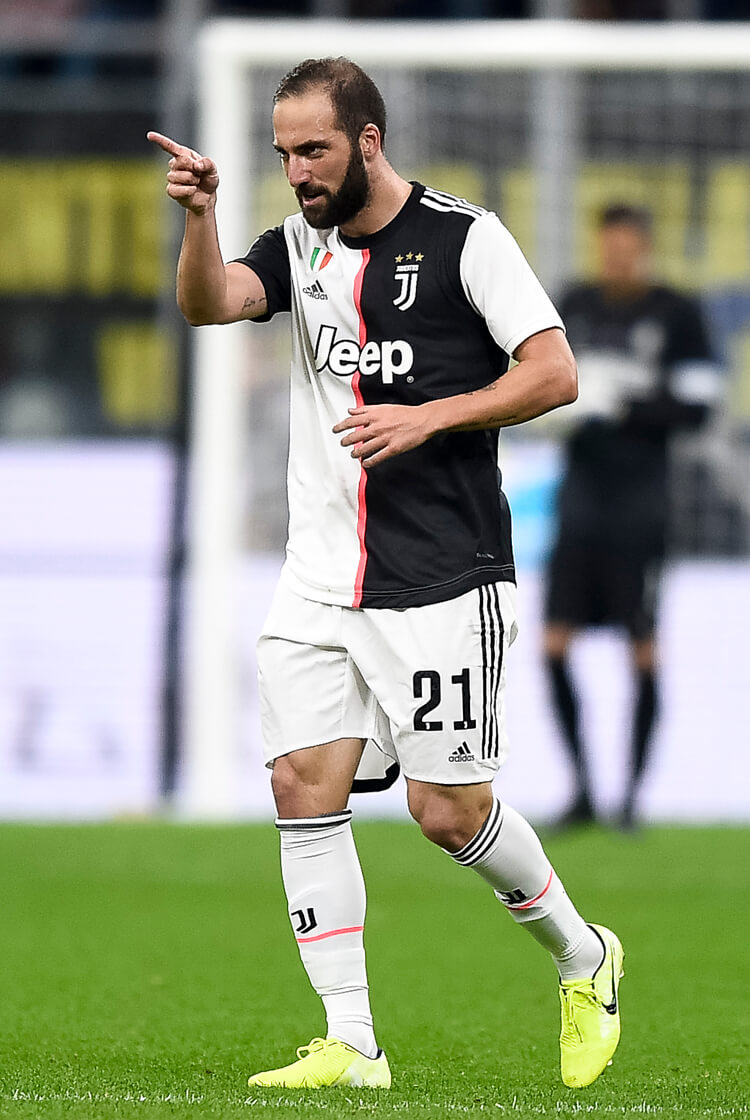 Defending champions Juventus ended Inter Milan’s 100 per cent start to the Serie A season with a dramatic late victory at the San Siro. The visitors, now managed by former Chelsea manager Maurizio Sarri, took an early lead through Paulo Dybala’s rasping finish by Samir Handanovic and could have doubled it when Cristiano Ronaldo hit the bar soon after. Inter, coached by another former Chelsea boss in Antonio Conte, struck back through a Lautaro Martínez penalty after Matthijs de Ligt was penalised for handball in the Juve area. Ronaldo had what looked a fine goal ruled out for a Dybala offside earlier in the move, and both teams had chances to secure the three points before Juve substitutes Rodrigo Bentancur and Gonzalo Higuain combined for the latter to strike home the winner 10 minutes from time. The win takes unbeaten Juve above their main rivals for the title at the top of the early-season Serie A table. 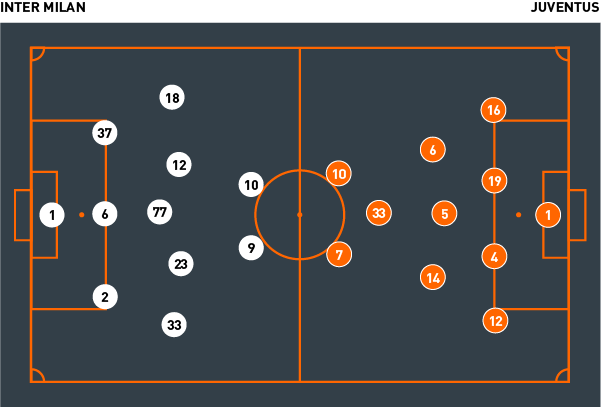 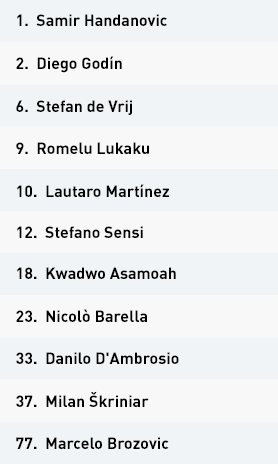 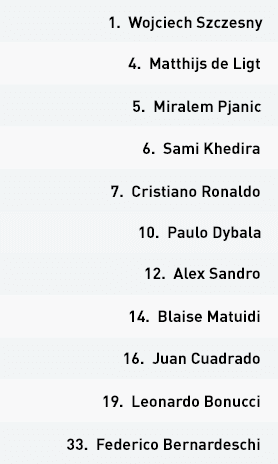 Antonio Conte set his unbeaten Inter Milan team up in a 3-5-2 structure with Romelu Lukaku and Lautaro Martínez starting as a front two, but they fell behind to a ferocious Paulo Dybala strike and saw Cristiano Ronaldo hit the post before they could establish any kind of foothold in the game. The hosts’ early commitment to a high press opened up space for direct balls over their higher lines of pressure, with Dybala and Ronaldo taking turns to threaten from the same left side.

Inter’s forwards locked on to the visitors’ widening centre-backs when pressing high, while one of Nicolò Barella or Stefano Sensi jumped on to the dropping Juve pivot Miralem Pjanic. Wing-backs Kwadwo Asamoah and Danilo D’Ambrosio struggled to get high enough to press the Juve full-backs, leaving Alex Sandro or Matthijs de Ligt free to play direct passes forward on the left.

When in possession, Inter’s key spaces of attack came around the sides of the Juventus forwards, as the visitors’ central-midfield trio blocked off direct access into the front two. Instead, the hosts looked for wide combinations to cross into the penalty area. Lukaku was the only real threat from such balls, although one did lead to the de Ligt handball from which Inter were awarded a penalty. Martínez duly scored to draw the hosts level, after which they abandoned the high press and dropped into the 5-3-2 shape that frustrated Juve’s progress in the final third.


Inter didn’t totally sit off, however, and continued to screen passes into and tightly mark the influential Pjanic. When they did recover possession, they showed brief signs of centrally penetrating the Juventus block, with Sensi and Barella working off different lines to give the opposition midfield more to think about. They looked to build using a four-on-three overload using single pivot Marcelo Brozovic with the back three against the Juve front three, but this often resulted in balls to the wing-backs and largely ineffectual crosses from wide areas.

Juventus moved to a higher press when out of possession, which put more pressure on Inter’s short build and forced them into more direct balls towards Lukaku. The striker lacked support around the first contact, however, with many Inter players still deeper from the initial short build – and this became even more the case when Sensi, a key midfield runner, had to be withdrawn because of injury. It also left Pjanic freer to drop between his centre-backs and create a three-on-two overload against Inter’s front line.

Although the hosts did manage to create chances as Juve’s energy faded, they struggled to work the central combinations that might have caused the visitors even more problems. Instead, Juve produced exactly that kind of central penetration with 10 minutes remaining, as Rodrigo Bentancur, Ronaldo and Gonzalo Higuain combined for the latter’s well-taken winner.

Maurizio Sarri set reigning champions Juventus up in a 4-3-1-2 formation, with Federico Bernardeschi as the central number 10 in front of the midfield and behind a front two of Cristiano Ronaldo and Paulo Dybala. The latter cut inside from the left to take advantage of a disorganised Inter back three and smash his team into the lead within the first five minutes.

Although Ronaldo and Dybala were the two central forwards, they both exploited the left inside channel in the opening exchanges, moving into the spaces behind Inter wing-back Danilo D’Ambrosio. As he pushed high on to Juventus left-back Alex Sandro, this opened up space for direct passes from the back line, into either one of the duo. Ronaldo soon crashed an effort against the Inter crossbar after an incisive diagonal dribble from that very left flank.

When the visitors conceded possession, they moved into a lower block to protect the spaces once Inter had worked the ball around the sides of Ronaldo and Dybala on their top line. Matthijs de Ligt’s clumsy handball in the area gifted the hosts a penalty from which Martínez equalised, but both before and after that incident the Juve back line was largely in control of the Inter attack.

Bernardeschi often pushed on to Inter’s deepest central midfielder, Marcelo Brozovic, to stop the Croatian dictating play and breaking the lines centrally. The hosts still had a spare man in their back three, against just Ronaldo and Dybala, but Juve simply narrowed in central areas to force Inter wide; from there, Leonardo Bonucci and de Ligt were happy dealing with any crosses that came in.

Juventus’ own build was frustrated by their inability to find their influential single pivot Miralem Pjanic, particularly if the Inter forwards pressed goalkeeper Wojciech Szczesny into poor distribution. The hosts were happy to let the Juve full-backs have possession, but pressed to restrict their options. This in turn forced Ronaldo and Dybala deeper in a bid to offer alternatives; while the former later had a goal ruled out for the latter’s earlier offside in the same move, Juve still struggled to cause Inter consistent problems in the first half.

This changed in the second period, when the visitors committed to a higher press that gave the Inter back line more problems in possession. The hosts were frequently locked into the corners and forced into longer balls that the Juve defence mopped up with ease. With Pjanic now dropping and picking up possession from them more consistently, the playmaker was able to combine with wider midfielders Blaise Matuidi, Sami Khedira and later Rodrigo Bentancur to create overloads against the Inter wing-backs. As the hosts’ central midfielders moved across to deal with these, so more spaces became available in the middle – and it was in one such pocket that Bentancur combined with first Ronaldo and then Gonzalo Higuain before the latter struck home the eventual winner in what could yet prove a crucial game in the Serie A title race.