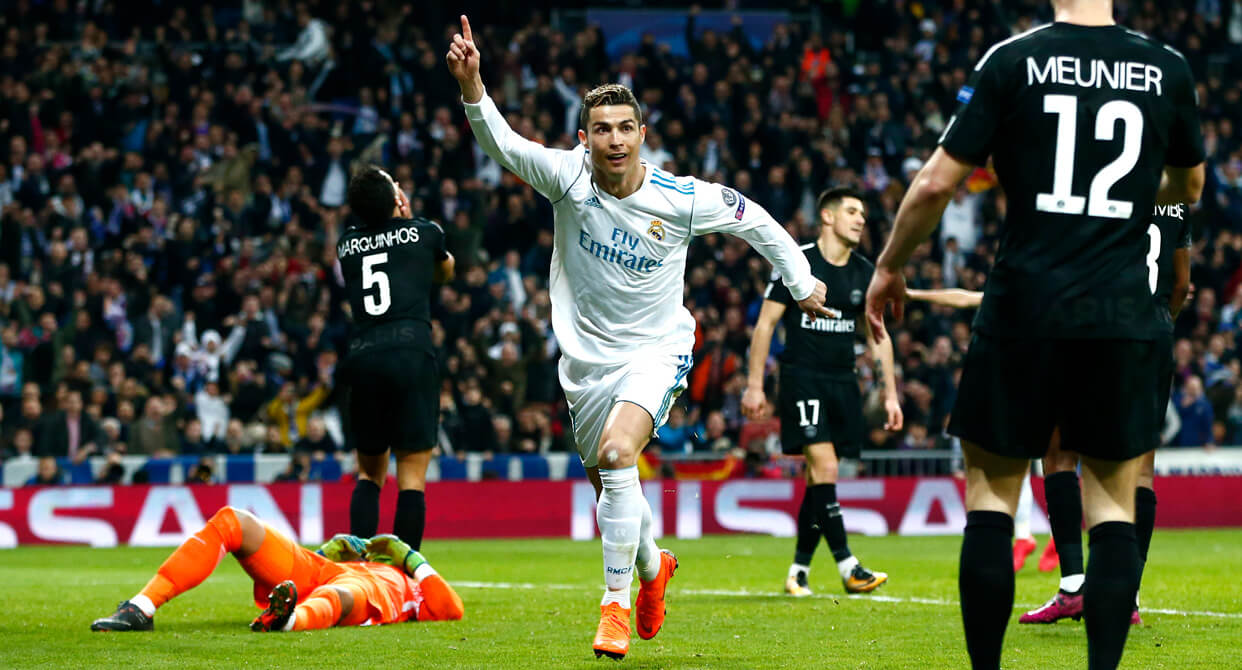 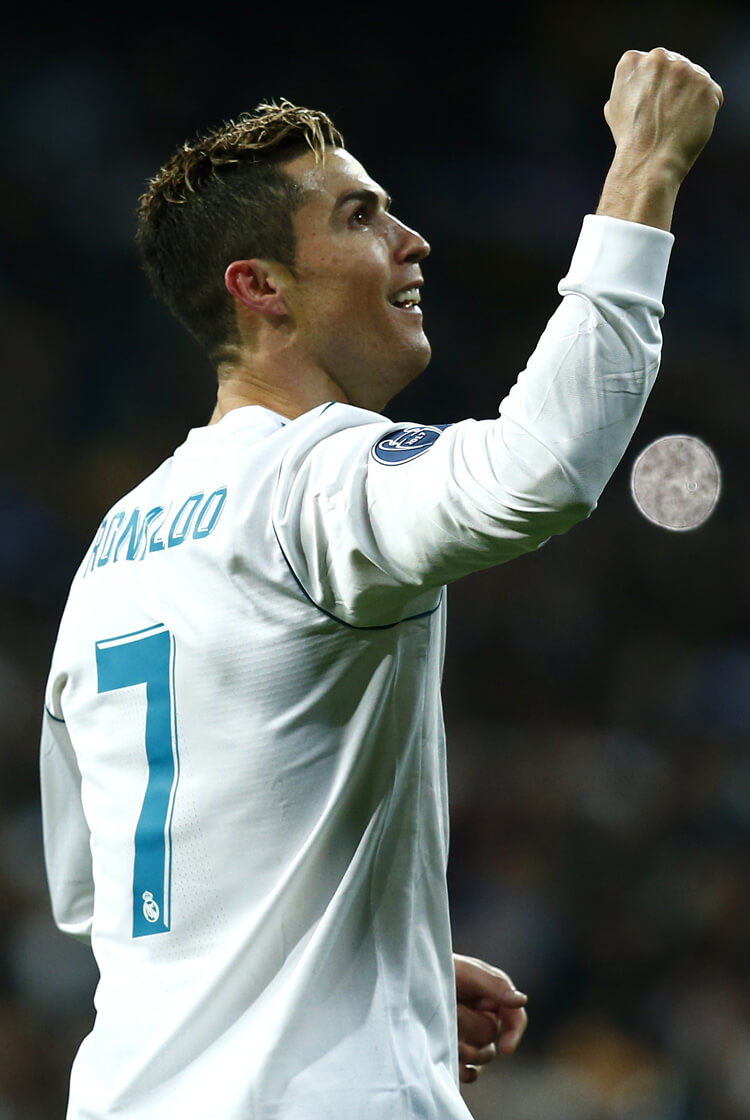 A thrilling match between two of European football's modern heavyweights turned one way and then the other at the Santiago Bernabeu. The pressure on Zinedine Zidane looked like rising when Adrien Rabiot put visitors PSG, so desperate for a Champions League run to match the size of their recent investments, ahead in the first half. But Cristiano Ronaldo smashed home a penalty before the break and then, after Unai Emery surprisingly replaced Edinson Cavani, Real took control of the tie in the last 10 minutes – Ronaldo again and then Marcelo scored the goals that made the defending champions favourites to progress. 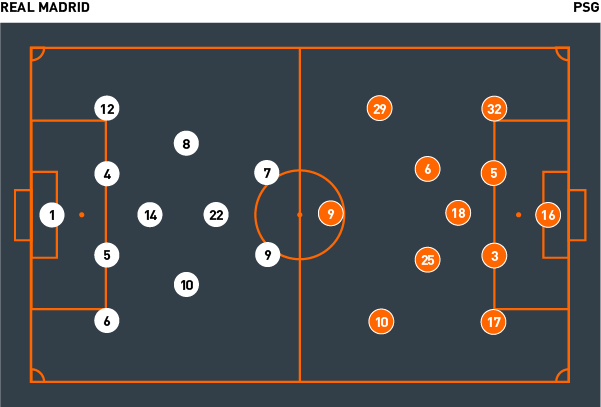 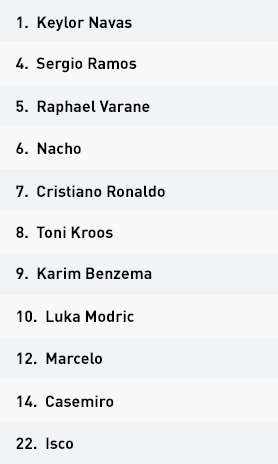 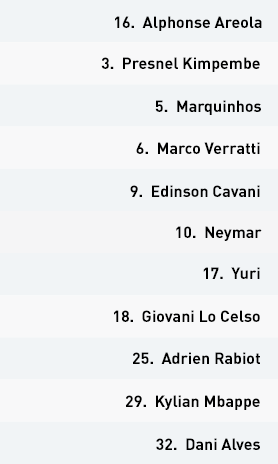 Zinedine Zidane set his Real side up in a 4-4-2 diamond formation, with the defensively minded Casemiro at the base and full-backs Marcelo and Nacho encouraged to push forward in wide areas.

The team looked to press the man in possession early and prevent the PSG front line from finding opportunities to link up with one another. Casemiro’s position should have allowed him to support his defence when the first lines were penetrated, but his deep starting position often saw him arrive late to the areas where the ball was played. With the visitors allowed too much space in midfield, the Real back line was often exposed and unable to properly neutralise the strong attacking threat of Kylian Mbappe and Neymar in wide areas. It was this movement, creating and taking advantage of the spaces in between the Real midfield and defence, that led to the PSG goal. It wasn’t until late in the second half, after Casemiro was replaced and Real reverted to two banks of four, that the home side looked more comfortable in defence.

In attack, also, Real looked more effective after reverting to a flat midfield four, with Toni Kroos and Luka Modric – who started the game to the left and right of the diamond – in more central areas and Marco Asensio and Lucas Vazquez out wide. They looked to get at the PSG defence on the flanks throughout the game, however – particularly on their left, where eventual goalscorer Marcelo and Isco (later Asensio) could outnumber their rivals and look to unsettle a fragile visiting back line with early balls in towards Karim Benzema and Cristiano Ronaldo. This is exactly how the second goal, scored by Ronaldo, came about.

Unai Emery set his team up in a 4-3-3, with Edinson Cavani the central striker between Kylian Mbappe and Neymar. Out of possession, they wanted to avoid being overrun by dropping back where necessary to maintain their defensive organisation. They looked to prevent Isco, at the front of the Real diamond, from moving too high up the pitch, knowing his ability to penetrate defensive lines. However, the defence was perhaps focused too greatly on central areas, leaving them exposed in the wide areas from where the home side’s second and third goals were created.

The midfield three of Adrien Rabiot, Marco Verratti and Giovani Lo Celso didn’t put enough pressure on the player in possession, enabling the Real midfield time and space to find the wide players who would eventually cause the visitors so much trouble. Centre-backs Presnel Kimpembe and Marquinhos were not strong enough in their own area, where mistakes were costly despite PSG numbers. Note here, too, the Lo Celso defensive error that gave away the penalty from which Cristiano Ronaldo equalised.

In attack, PSG looked to capitalise on the spaces left by a Real diamond formation that didn’t function particularly well to get the ball wide to Neymar and Mbappe as quickly as possible. While Verratti was largely contained by the Madrid midfield, Rabiot did enjoy some success and was able to dominate the space left by Casemiro at the base of the diamond. Once Real shifted to a traditional midfield four, however, and with Edinson Cavani replaced by the more defensive Thomas Meunier, the visitors weren’t able to bring their dangerous front two as much into play.

On the counter-attack, PSG looked to play direct both into space and to the feet of Neymar and Mbappe, with a view to making the most of the significant spaces left by the attacking Real full-backs. The lightning-quick Mbappe was inevitably the most dangerous player in this part of the game.

Real Madrid directed their attacks towards the left-hand side, where Marcelo and Isco, and later Marco Asensio, looked to make the most of the spaces left by a PSG defence focusing on more central areas.

The home side looked much more solid when reverting from a midfield diamond to a traditional line of four, with Asensio and Lucas Vazquez replacing Isco and Casemiro and Luka Modric and Toni Kroos able to move into the middle.

Both individual and collective errors cost PSG dear, as they never managed to cancel out the threat Real posed in wide areas and then failed to defend strongly enough in their own penalty area.

Kylian Mbappe was the chief threat for PSG throughout – his pace, ability to read the game and attacking intent meant he was a constant menace in the wide areas where Real tend to leave themselves vulnerable.