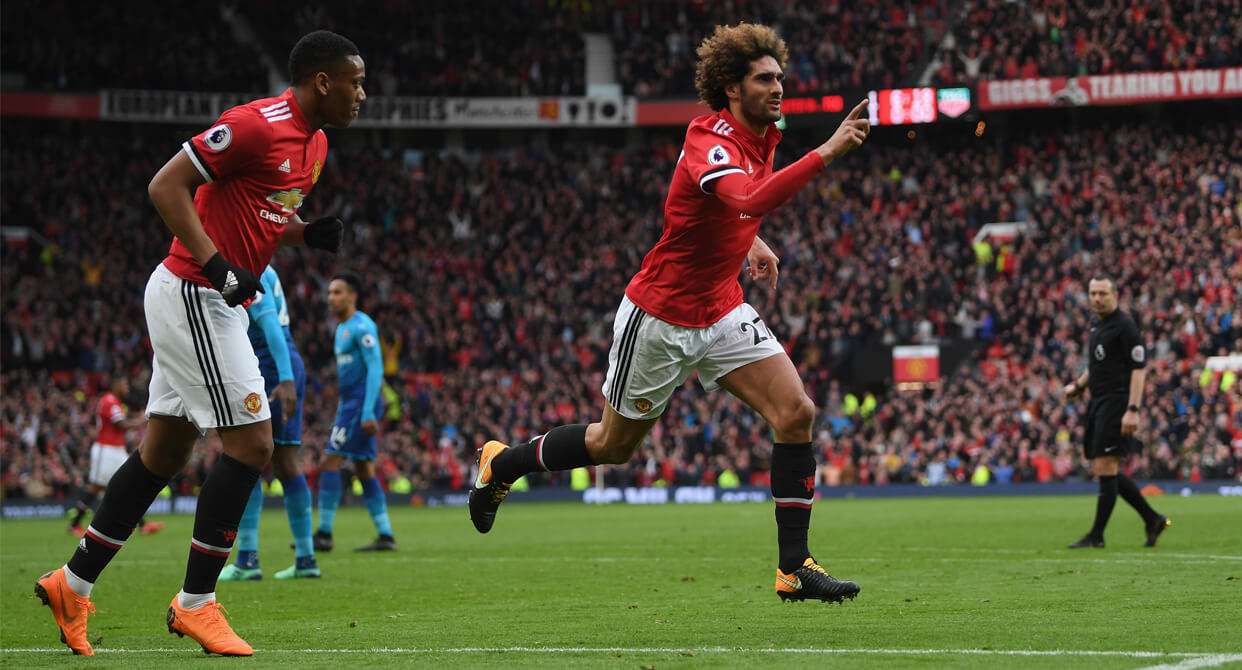 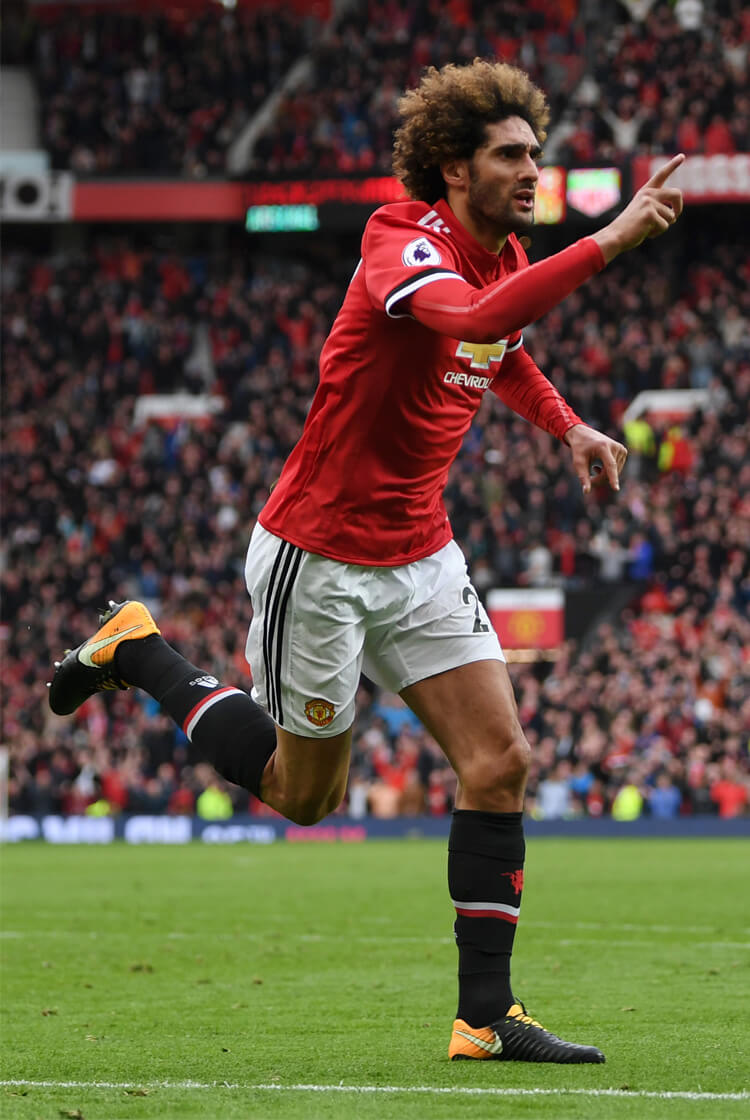 A stoppage-time winner from Marouane Fellaini ended Arsene Wenger's final game at Old Trafford as Arsenal manager in defeat, with Manchester United sealing a 2-1 victory. Paul Pogba opened the scoring for United with a simple tap-in after Alexis Sanchez had gone close against his former team with a header. Henrikh Mkhitaryan equalised soon after the break, before Fellaini soared to head in Ashley Young's cross and snatch a dramatic win for Jose Mourinho. Here, our professional coaches analyse the tactics and key moments from United's triumph. 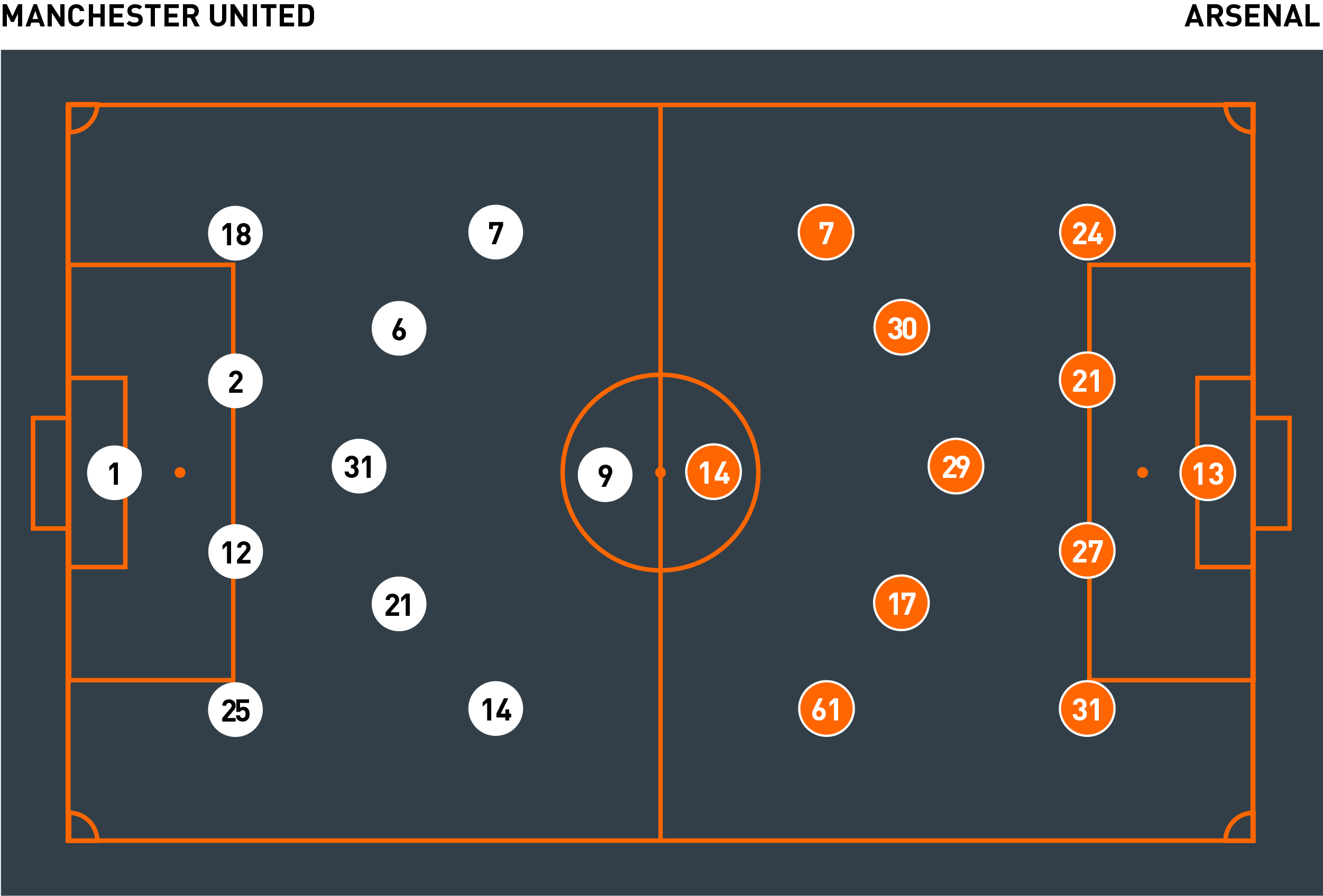 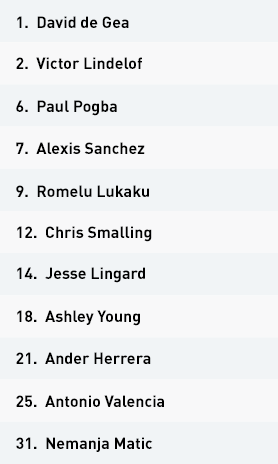 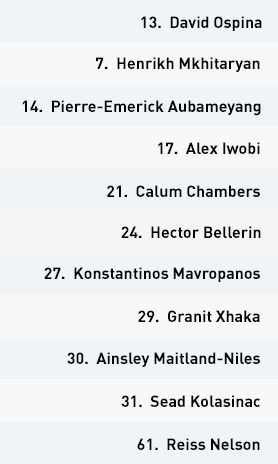 Manchester United began in a 4-3-3 attacking system, which converted into a 4-5-1 as Alexis Sanchez and Jesse Lingard recovered into a defensive midfield unit of five. The home side started with confidence, dominating the majority of possession. Arsenal began in a mid-block, allowing David de Gea to build using short passes against little defensive resistance.

Lingard moved inside from wide right, as Sanchez also moved inside as a second striker to support Romelu Lukaku. Paul Pogba held the left side of midfield, as they looked to overload against Arsenal’s central midfield trio. Reiss Nelson initially recovered well in Arsenal’s defensive shape, restricting United’s central successes.

The home side therefore looked to build in the wide areas using Antonio Valencia, who rampaged forward from right-back. Valencia powered crosses into the penalty area from the right side, looking for Lukaku and the late runs of Pogba from deep.

United opened the scoring as they won possession in midfield and drove at the Arsenal defence. Lukaku crossed deep, searching for former Arsenal man Sanchez, whose header was initially deflected on to the post by Hector Bellerin. Pogba was on hand with a simple tap-in from the rebound.

United were second best for the remainder of the first half, as Arsenal sprung into life. Jose Mourinho’s team struggled to deal with Nelson’s movement across their back line. With Nelson receiving unchallenged behind United’s midfield block, one of Chris Smalling or Victor Lindelof was forced to step out of the back line. This created additional gaps for Arsenal to attack. Despite these gaps, though, de Gea was relatively untested.

Lukaku was forced off injured early in the second half and replaced by Marcus Rashford. United continued to overload central areas, as Sanchez and Lingard roamed across midfield. Arsenal’s defensive structure narrowed, enabling spaces for Valencia to continue to attack on the right.

This time, however, without the presence of Lukaku, United’s crosses were ineffective. Marouane Fellaini was introduced, which restored an aerial threat in the Arsenal penalty area. The Belgium midfielder, supported by Pogba, looked to challenge any balls crossed in by Valencia on the right side. With seconds remaining, Fellaini rose highest – this time from an Ashley Young cross from the left – to snatch a last-minute victory for the hosts and deny Wenger a deserved point.

Arsenal set up in a 4-3-3 structure. Henrikh Mkhitaryan and Reiss Nelson often joined the midfield unit when defending, forming a central block of five to help protect the defence. The visitors began in a mid-block, allowing the home side the majority of possession.

In the opening few minutes, United tried to overload central areas with six players during their build-up – and Arsenal were forced to change their defensive approach. The Gunners pulled Mkhitaryan and Nelson back into midfield and narrowed off, creating a central block of five.

The space was now in the wide areas, and Arsenal particularly struggled with their left side, as Nelson moved infield. Sead Kolasinac rarely pressed in to the wide areas, remaining central to help deal with the incoming crosses.

As Arsenal began to win more possession, however, they opened up into a more offensive structure. The central midfield trio of Alex Iwobi, Granit Xhaka and Ainsley Maitland-Niles expanded, as they looked to patiently build attacks of their own. But with the increased distances between players, this soon became an issue. United now had the opportunity to drive forward during attacking transitions.

After losing possession, United drove at speed through Arsenal’s midfield. A deep cross found Alexis Sanchez at the far post, and despite a brilliant block from Hector Bellerin, Pogba tapped home the rebound. Arsenal reacted well to this setback, and began to create chances of their own. They finished the first half strong, as Nelson moved across United’s back line, finding good spaces to receive and attack.

Arsenal continued well in the early parts of the second half. They moved the ball much quicker during counter-attacks, with Pierre-Emerick Aubameyang and Mkhitaryan looking dangerous when attacking with speed. Aubameyang moved across towards the left side, allowing Mkhitaryan to move into a central position.

This proved effective during attacking transitions, as Arsenal’s midfield press was much more aggressive and organised. Xhaka pinched the ball in midfield and set away Mkhitaryan. Aubameyang drifted to the left, allowing Mkhitaryan to attack Lindelof one against one. The former United man struck a low shot into the bottom corner to equalise, with de Gea stood motionless.

Arsenal’s pressing and attacking endeavours soon began to fade, with the home side increasing the pressure. Until United introduced Marouane Fellaini, however, the away side dealt with crosses well. Arsenal were still a threat on the counter, as Aubameyang drifted in to the wide areas, allowing Nelson or Mkhitaryan to drive up the pitch from deep.

Despite still looking dangerous themselves, Arsenal began to drop deeper and deeper, with Aubameyang increasingly isolated in attack. The away side couldn't quite hold out, as Fellaini nodded home a last-minute winner to win the points for United.

The key battle focused around the movements of Manchester United’s midfield. Jesse Lingard moved from right midfield into a central attacking role, as Alexis Sanchez also shifted centrally from a wide position. The Chile international played much higher than Lingard, often as an additional central striker supporting Romelu Lukaku.

With Paul Pogba occupying the left side and Ander Herrera the right, United had five central players available to build attacks. Arsenal’s midfield became more compact as a result, with Reiss Nelson and Henrikh Mkhitaryan joining to form a midfield block of five. The space for United was now in the wide areas, as Antonio Valencia discovered.

The right-back surged forward, providing multiple crosses for Lukaku and Pogba to attack. United’s attack was temporarily weakened when Lukaku went off injured early in the second half; however, Marouane Fellaini soon restored aerial presence, and grabbed a late winner with a towering header – this time from an Ashley Young cross – past David Ospina in the Arsenal goal.