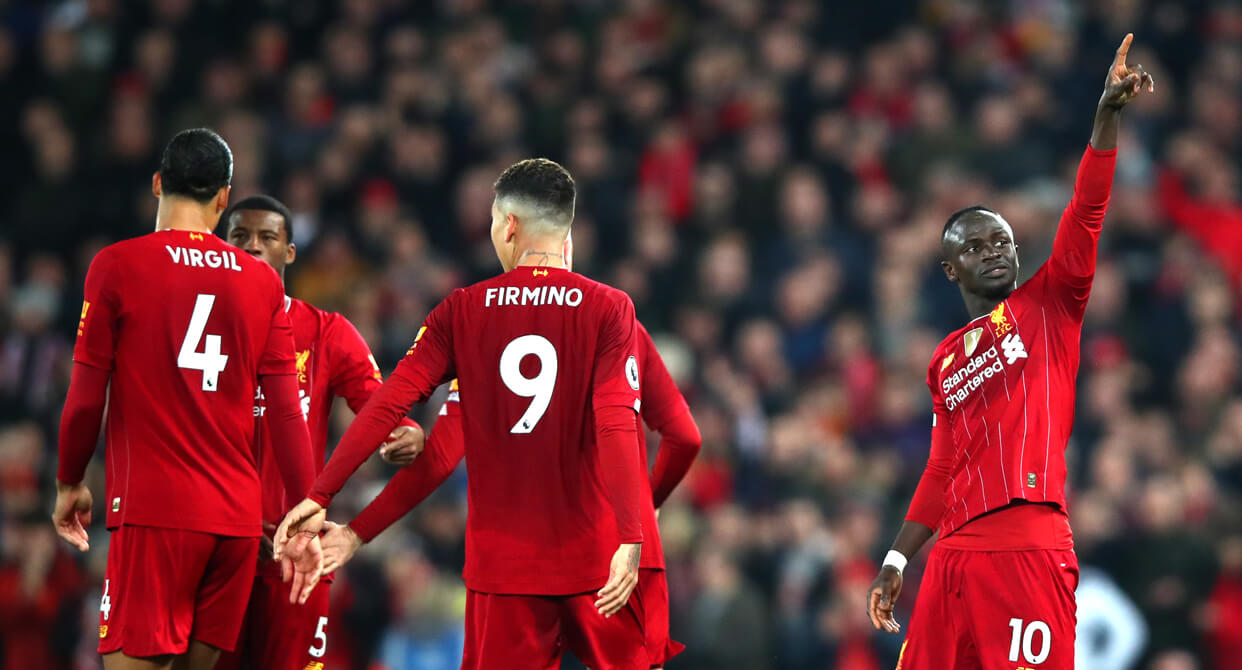 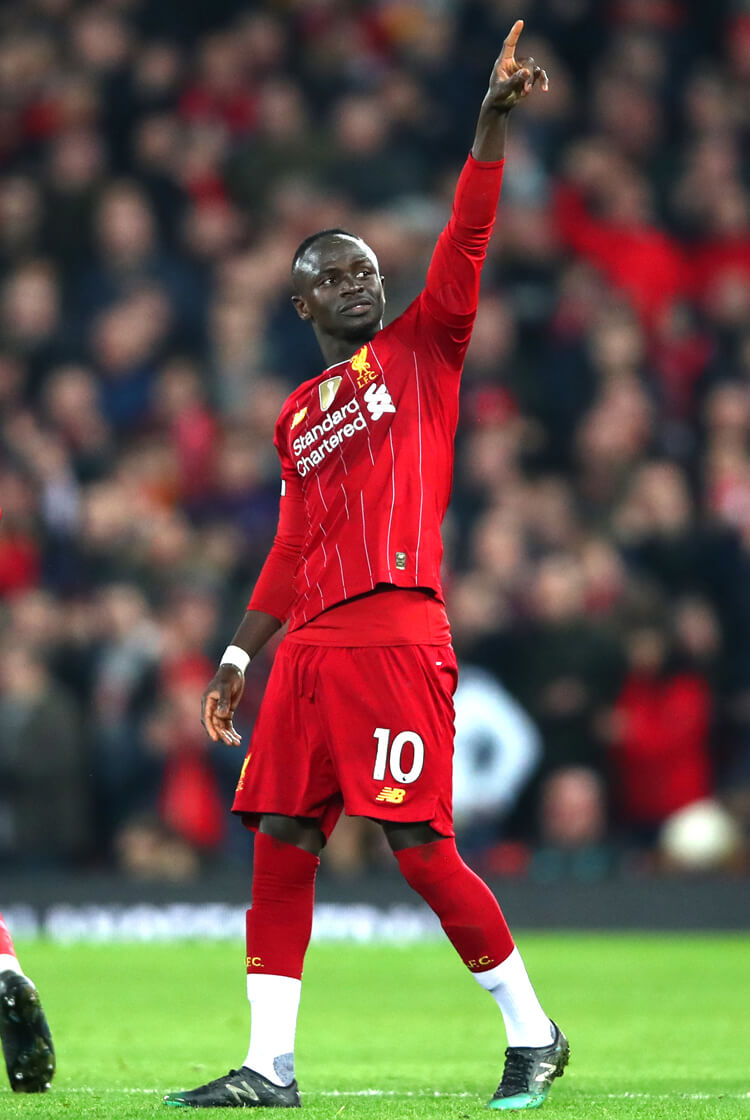 Liverpool reached the halfway point of their Premier League season unbeaten after battling to a hard-fought victory at home to Wolves. The visitors arrived at Anfield fresh from completing a league double over Manchester City, and proved equally challenging opponents for the champions' would-be successors in yet another game whose narrative came to be dominated by the use of VAR. The two decisive moments came late in the first half; first, when referee Anthony Taylor's decision to rule out a Sadio Mané goal for a handball by Adam Lallana was overturned; and soon after, when Wolves wing-back Jonny was adjudged offside in the build-up to what Wolves manager Nuno thought was an equaliser for Pedro Neto. The Reds thus went into the break a goal up, and were able to hold on in an occasionally tense second half. Jurgen Klopp and his team have now won 27 of their last 28 games in the Premier League stretching back to the middle of March. 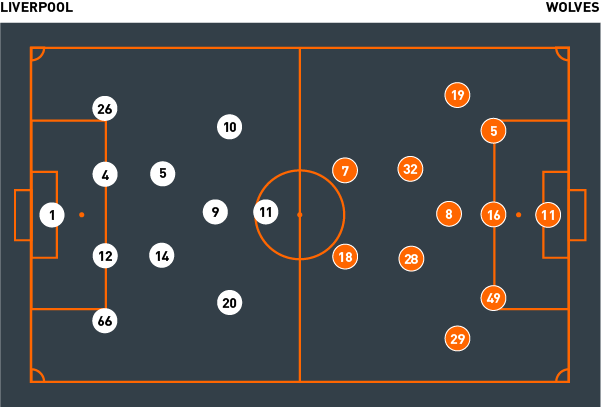 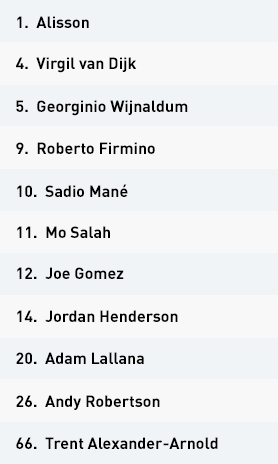 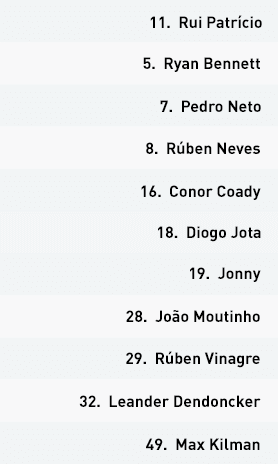 Jurgen Klopp set Liverpool up in a 4-2-3-1 structure, with Georginio Wijnaldum and Jordan Henderson as the double pivot, Roberto Firmino playing as a number 10 behind Mo Salah, and Sadio Mané and Adam Lallana lining up as the wide attackers. They soon converted into a 4-4-2 diamond, however, with Henderson at the base, Wijnaldum and Lallana to the sides and Mané joining Salah on the top line. Firmino remained as the number 10, making frequent diagonal runs in behind the Wolves wing-backs – who were initially aggressive in their pressing of Liverpool full-backs Andy Robertson and Trent Alexander-Arnold.

Direct running in behind from either Salah or Mané helped push the Wolves back three deep, which created extra space between the lines. The visitors narrowed to protect these, with Liverpool then building around and into their full-backs – who looked to cross from slightly deeper positions than usual in a bid to exploit any spaces beyond the back five. Wolves did well to limit Liverpool’s familiar access from full-back into the front line, however; their mid-block worked to negate the hosts’ attempted final-third penetrations.

The increased attacking movements of Robertson and Alexander-Arnold did open up wider spaces for the Wolves forwards to spin into, but both Virgil van Dijk and Joe Gomez were commanding in these scenarios. The only advantage Wolves’ structure allowed was that it gave them two permanent central threats – Diogo Jota and Pedro Neto – against the Liverpool centre-backs, although Henderson’s deeper position at the base of the diamond gave the hosts adequate cover.


Having gone ahead through Mané’s strike late in the first half – and survived what looked a fine equaliser from Neto on the stroke of half-time – Liverpool tended to leave one of their full-backs deeper in the second period, to combat the threat of Wolves on the counter-attack. When the Reds did push both full-backs high, they dropped the double pivot deeper to block central access in case of the counter-attack. That gave them fewer central runners going forward, however, as the visitors continued to defend in numbers and with impressive physicality.

Wolves’ eventual change to a 5-4-1 shape meant only one central-forward threat for most of the second period. A central box around lone forward Jota – who was replaced by Raúl Jiménez with 20 minutes remaining – meant that the Liverpool full-backs often had to defend one-on-one against the wide attackers, with the spare Wolves centre-back repeatedly looking to sweep balls over the head of either Robertson or Alexander-Arnold. The Reds held out, however, to secure a third straight clean sheet and maintain their breakneck pace at the top of the table.

Nuno Espirito Santo set his Wolves team up in a 5-3-2 formation, with Diogo Jota and Pedro Neto operating as a front two behind a midfield three of Rúben Neves, Joao Moutinho and Leander Dendoncker. The visitors operated in a mid-block and rarely pressed high, instead preferring to maintain a narrow and compact shape to deny Liverpool access into their own narrow front line.

Wing-backs Jonny and Rúben Vinagre initially pressed Liverpool full-backs Andy Robertson and Trent Alexander-Arnold, but they soon dropped back alongside the three central defenders. The front two screened passes into Liverpool’s central midfielders, and then looked wide to press the full-backs as and when necessary; this allowed the Wolves wing-backs to cover the inside channels, where they could work to stop Georginio Wijnaldum and Adam Lallana – now operating to the sides of a midfield diamond – linking into the Liverpool forwards.

Upon regaining possession, Wolves immediately looked for one of their two forwards to make curving runs away from their marker, attacking the spaces left by the hosts’ attacking full-backs. Despite offering a reasonable threat in behind, Liverpool’s powerful central defence coped comfortably with any through balls. With one of the central forwards also required to either press the full-back or cover access into the double pivot, Wolves’ attacking structure struggled to maintain a threat. A lone striker in advanced areas proved much less potent when trying to secure possession or compete against an imposing central-defensive partnership.

Despite their strong defensive organisation, the visitors fell behind to Sadio Mané’s strike late in the first half. They were then desperately unlucky to have Neto’s smart finish ruled out for the narrowest of offsides earlier in the move, but a positive reaction after the break saw Wolves enjoy sustained spells of pressure. Jota moved wider to combine from their left side, while similar movements to the right from Neto helped create around Liverpool’s full-backs. This allowed Wolves’ wider centre-backs to step forward in possession and play over Robertson and Alexander-Arnold, with the extra option of a delayed run from the wing-backs proving a useful pattern.

The dangerous Adama Traoré was later introduced for Dendoncker, as the visitors changed to a 3-4-3 shape in attack and a 5-4-1 when defending. A distinct lack of central access into the lone forward – Jota was replaced by Raúl Jiménez – was the result, however, with more emphasis on wider attacking play for forward runs from Traoré and Neto. The visitors also struggled to counter-attack from deep, as the wider midfielders were required to track the Liverpool full-backs and thus found it difficult to cover the ground from defence back into attack.

Although they didn’t look like conceding a second, Wolves struggled to create enough to really threaten Liverpool in the second half. They regularly succeeded in penetrating around the Liverpool block, particularly on their left side, but the final ball or finish was too often lacking as they failed to find the equaliser their late pressure arguably deserved.