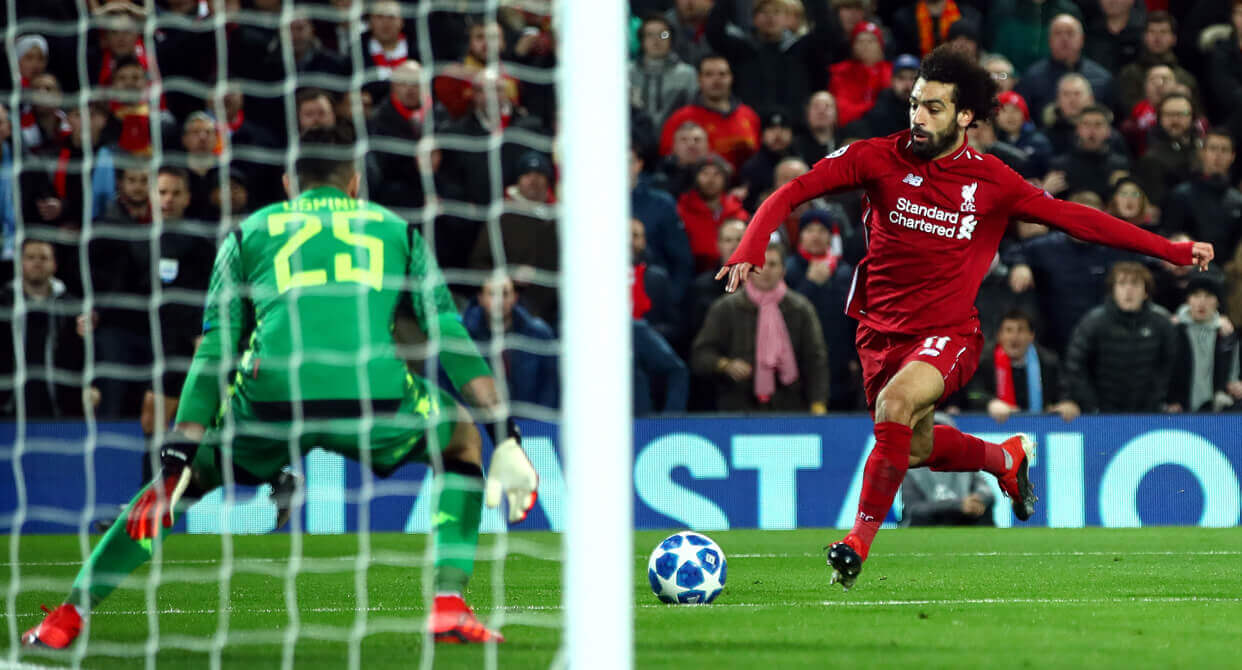 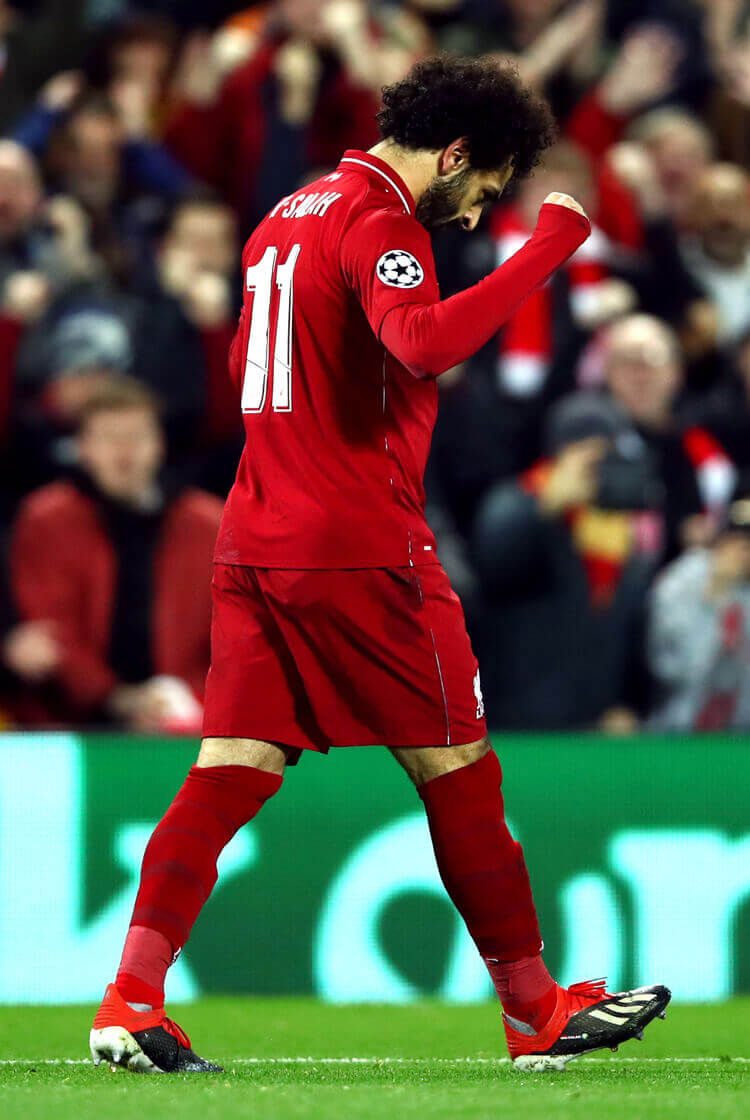 Liverpool safely negotiated their passage into the last 16 of the Champions League with this heart-stoppingly narrow victory over Napoli on another atmospheric European night at Anfield. Mo Salah was once more the matchwinner for Jurgen Klopp, skipping clear of his marker to drive a low shot through David Ospina for the goal that eventually saw the Reds home late in the first half. The hosts created a number of opportunities to increase their lead in the second half, Sadio Mane in particular missing a couple of excellent chances, but they held on to claim the result they needed – in no small part thanks to goalkeeper Alisson, who kept out a shot from Napoli substitute Arkadiusz Milik deep into added time. 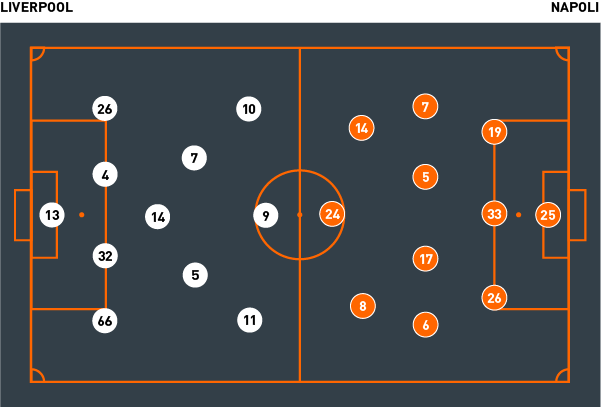 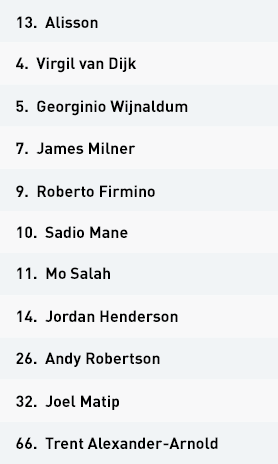 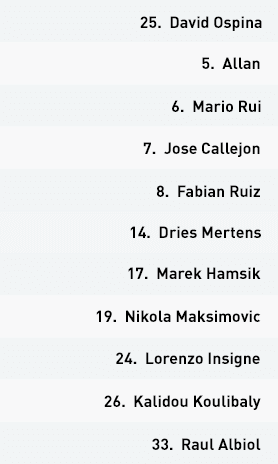 In the early stages, Liverpool looked to play the ball in behind the Napoli defence for the runs of Salah and Mane. If this was not possible, the midfielders would position themselves to open up a passing lane from the Liverpool defenders through to Salah’s feet. Wijnaldum moved into a false full-back position on the right, drawing Fabian Ruiz with him and opening up space inside; Trent Alexander-Arnold pushed up from right-back to attract the attention of Mario Rui; while Firmino would drop into midfield, along with Milner and Henderson, to occupy Marek Hamsik and Allan – all of which left space open for the ball through to Salah. The Reds regularly targeted this side of the pitch, and it was eventually a pass into Salah’s feet from Milner that led to the only goal of the game.

Liverpool had lots of success when building from the back, without having to do anything hugely creative or risky. They created a simple 4v2 in a diamond shape, with Alisson, Virgil van Dijk, Joel Matip and Jordan Henderson against Lorezno Insigne and Dries Mertens. The distance between Napoli’s first and second lines was so big that Henderson could regularly get on the ball behind the Napoli forward line, turn and drive or play forwards, while he also had the option of his full-backs outside the Napoli midfield line.

In the first half, Mane played more like a centre forward than a wide attacker coming in from the left. Milner would drift out wide to that side, with Firmino dropping in to ensure that Liverpool still kept control in central areas. In the second half, Milner remained more central – leaving Andy Robertson to get forward more from left-back.

Out of possession, Liverpool pressed in a man-oriented 4-3-3 structure. Salah, Firmino and Mane would match up against the Napoli back three; Milner and Wijnaldum would lock on to Hamsik and Allan in midfield, while Robertson and Alexander-Arnold would track Callejon and Rui, leaving Henderson in front of Van Dijk and Matip. Crucially, the full-backs would only track their men if the ball was travelling into their feet or if play was being forced out to their side – in this case, the far-side full-back would tuck in with the rest of the back line to avoid leaving Henderson and the centre-backs three on three against Insigne, Mertens and Fabian Ruiz.

As Liverpool began to protect their lead, they formed extreme compactness around Hamsik and Allan when the Napoli centre-backs had the ball, forming more of a mid-block. This prevented the Napoli playmakers from getting on the ball and, if they did, they could be immediately pressed from all angles. This did leave the ball out wide, which Napoli began to use, but Liverpool were happy for this to happen and would then move out to the wide areas to prevent any further forward play.

Napoli set up in a 3-4-3 formation in possession, with Raul Albiol, Kalidou Koulibaly and Nikola Maksimovic forming the back three. Mario Rui pushed up to join the midfield line on the left side, with Marek Hamsik, Allan and Jose Callejon forming the rest of the unit; Fabian Ruiz, Lorenzo Insigne and Dries Mertens operated as the trio in attack.

The visitors had major difficulties in bringing the ball out from the back and dealing with Liverpool’s man-oriented press. As the back three were matched up, they often ended up clipping balls forward under pressure and losing possession. Their success in this area came when Allan dropped in between the centre-backs and Maksimovic pushed higher on the right. Sadio Mane would move to press Albiol, who could then find Maksimovic – this would then drag James Milner out from midfield to close him down, with Andy Robertson already busy with Callejon. If Mane chose to play deeper to discourage the pass into Maksimovic, Napoli then had a central three-on-two with Allan, Albiol and Koulibaly against Firmino and Salah, which in turn allowed for an easier progression to the next phase.

This type of positional flexibility didn’t happen anywhere near enough for Napoli to consistently play out well, however. As a result, their main opportunities to attack in the Liverpool half came through transitions. They would also look to drop Insigne and later Milik deeper and play into their feet; this pulled the Liverpool team in more centrally and created the opportunity to play up to the forward’s feet, set back to Hamsik or Allan and then play a diagonal pass out to a wide player in space.

This is where Napoli looked to concentrate their attacks in the second half. They would use the ball out wide as a trigger for their attackers to make a run between the full-back and centre-back, and then receive in a position to cross behind the Liverpool back line.


Out of possession, Napoli pressed in a 4-4-2, with Fabian Ruiz moving from the attacking line into a left-sided midfield position and Mario Rui dropping back behind him into left-back in a defensive line of four. The visitors had very little success in preventing Liverpool from playing out, however. Insigne and Mertens would try to close down Van Dijk and Matip, while screening Henderson at the same time. The issue here was that Hamsik and Allan were so cautious in their positioning that they would rarely move past the halfway line – Henderson could then create a bigger angle between the lines, making it very easy for Liverpool to bypass the first two.

When the ball went into full-backs Robertson or Alexander-Arnold, Callejon and Fabian would initiate a press from midfield in a traditional 4-4-2 structure. But Napoli struggled to deal with the blindside movements of Firmino, Wijnaldum and Milner behind their midfield line, and so were often and too easily played through. This was evident for Liverpool’s only goal on the night, and the reason why Napoli will now be playing Europa League football in the new year.