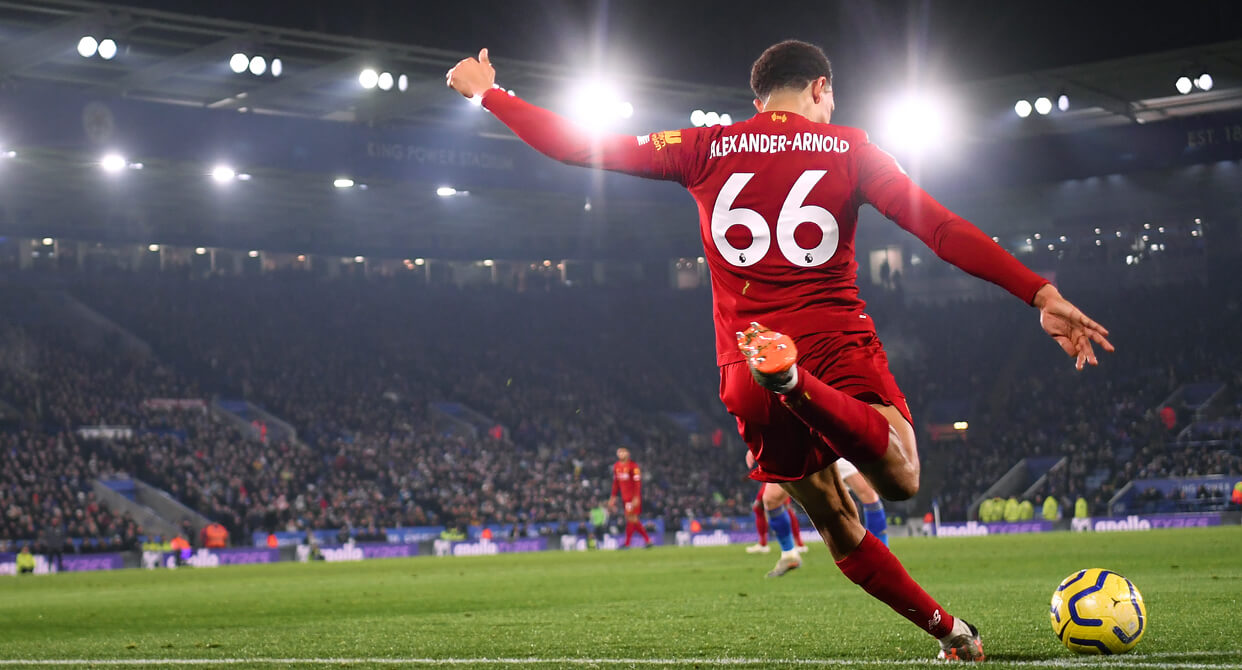 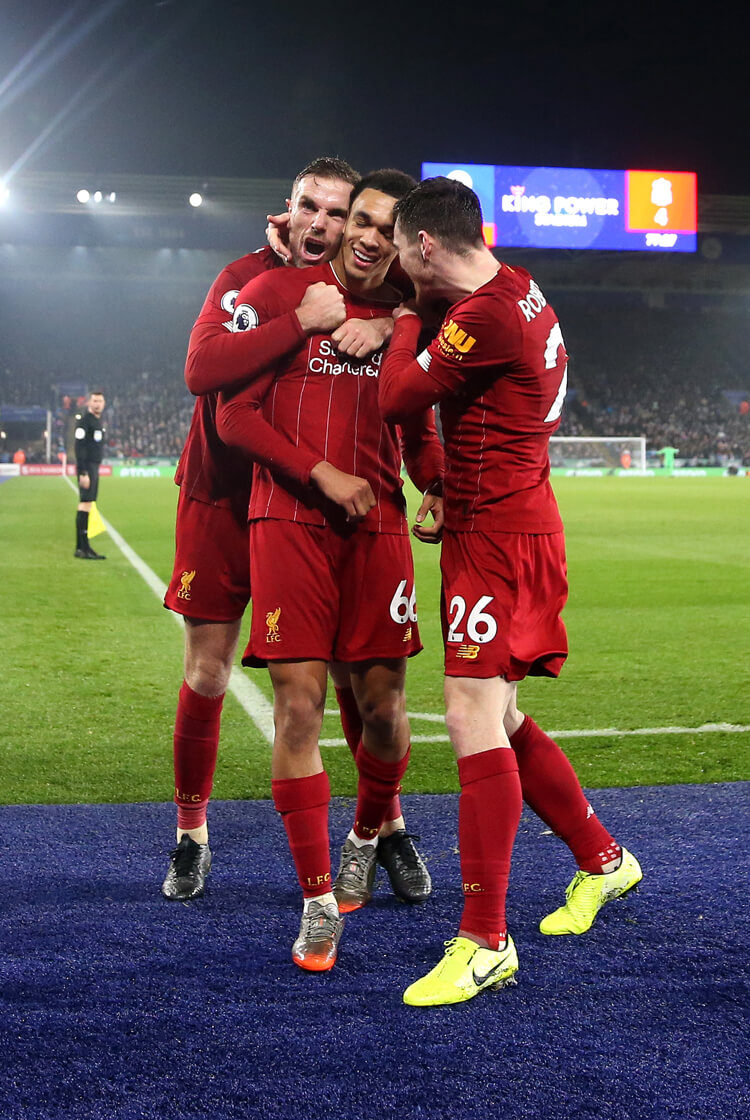 Liverpool returned from their Club World Cup victory over Flamengo to reaffirm their superiority at the top of the Premier League with a crushing 4-0 win over second-placed Leicester City. Jürgen Klopp's men showed no signs of fatigue after their return journey to Qatar, and should already have been a couple of goals up by the time Trent Alexander-Arnold crossed for Roberto Firmino to head past Kasper Schmeichel just past the half-hour mark. Brendan Rodgers' team struggled to impose themselves, failing to register a single shot on target across the 90 minutes, and their task was made even harder when Caglar Söyüncü was penalised for handball midway through the second half. James Milner tucked away the resulting penalty with his first touch after coming on for Mo Salah, with Firmino finishing smartly from another Alexander-Arnold cross moments later. By the time the Liverpool right-back flashed a shot home to get on the scoresheet himself, the Reds' job was very much done. 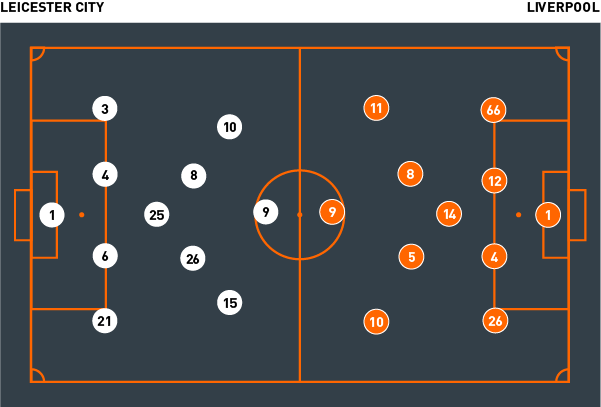 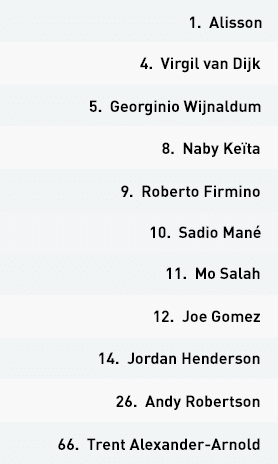 Brendan Rodgers set his Leicester City team up in a 4-3-3 formation, with Jamie Vardy supported from wide areas by James Maddison on the left and Harvey Barnes on the right. The hosts looked to build through the thirds of the pitch, but inaccurate passing and a lack of height and width from their full-backs actually led to mistakes in front of goal and early chances for Liverpool. A narrow Liverpool front line, well supported by the advanced midfielders and full-backs, simply picked off any aerial balls.

Once Wilfred Ndidi and Youri Tielemans created a double pivot, offering in the gaps between Liverpool’s front three and supported by higher full-backs, the Foxes were able to move forward. Dennis Praet and Maddison, now moving inside, created a central-midfield box for the home side, with Barnes joining Vardy in a 4-2-2-2 shape Rodgers often used when manager at Liverpool. From here, right-back Ricardo Pereira offered as a diagonal target beyond Sadio Mané, requiring Andy Robertson to leave the Liverpool back line to cover these movements. Barnes then offered beyond Robertson to drag Virgil van Dijk towards goal, but mistimed runs and passes meant Leicester rarely got into the positions from which they could threaten.

Vardy patrolled from the left inside channel, targeting his favoured area around right centre-back Joe Gomez, but Liverpool’s mid-block reduced the space between the lines and limited access into the forwards. Both Gomez and van Dijk were outstanding in one-on-one situations, with Vardy in particular unable to get into the game.


The hosts’ narrow defensive shape against Liverpool’s increasing possession created space in wide areas for the Reds’ always dangerous full-backs, with a Trent Alexander-Arnold cross leading to Roberto Firmino’s opener after half an hour.

Leicester tried to stop any play into Jordan Henderson by committing higher on to Liverpool’s single pivot, but a bigger problem was their own deeper build. The visitors moved high on to the Foxes’ double pivot, encouraging aerial balls to Pereira. With the majority of the Leicester midfield moving across to support these passes, the hosts became vulnerable down their left side – where after Liverpool regains they repeatedly looked for the superb Alexander-Arnold.

Rodgers shifted into a much lower block as a result, with Tielemans and Praet the two closest to Vardy in a 4-3-2-1 shape. Maddison and Barnes were thus forced back to track the Liverpool full-backs; the result was that, when the hosts did regain the ball and look to break, their most dangerous attackers were often too deep to carry any threat going in the other direction.

Marc Albrighton and Ayoze Pérez were eventually introduced to try and add a dynamic spark out wide, but three Liverpool goals in less than 10 second-half minutes put the game to bed in ruthless fashion.

Jürgen Klopp set Liverpool up in their familiar 4-3-3 shape, with Naby Keïta and Georginio Wijnaldum in the advanced midfield roles ahead of single pivot Jordan Henderson. Roberto Firmino, fresh from his trophy-winning strike against Flamengo in the Club World Cup, started between Mo Salah and Sadio Mané in the usual front three. The visitors’ now renowned high press led to a couple of early chances, but Mané in particular was unable to take advantage.

Although Leicester regularly found a way through Liverpool’s first line of pressure, the Reds’ back line were immense when dealing with any threat into the spaces beyond. The visitors soon dropped into a mid-block, which limited the gaps into which Jamie Vardy or Harvey Barnes could receive behind the Liverpool midfield. With greater compactness between the lines, Wijnaldum could also track Ricardo Pereira’s advances from right-back.

James Maddison’s inside movements in possession soon became a source of joy for Liverpool, with Trent Alexander-Arnold gradually stepping forward in attack on the right. The full-back found bigger gaps in which to receive and drive forward; with Salah naturally drifting inside Leicester left-back Ben Chilwell, Alexander-Arnold enjoyed even more freedom to deliver cross after cross into the home penalty box.

Firmino’s dropping in between Keïta and Wijnaldum created a midfield diamond, with Henderson at the base. Both centre-backs, Virgil van Dijk and Joe Gomez, stepped forward with the ball, prompting both Alexander-Arnold and Andy Robertson to push higher out wide. Salah and Mané’s narrowing movements in what was in effect a 4-4-2 diamond shape, and the threat they carried in behind, forced the whole Leicester back four to maintain their depth and not squeeze forward.

The second half showed Liverpool’s commitment to a higher press, as their central midfield pushed forward on to the hosts’ double pivot. Mané in particular worked superbly to press both Jonny Evans and Pereira; with further support from a higher Robertson and the combative Wijnaldum, Liverpool frequently regained the ball on their left, from where they could switch and burst down their right. Robertson’s higher position also gave Alexander-Arnold yet another central target to find from his crosses in a dominant second half.

Both Henderson and Wijnaldum were also superb as covering midfielders, protecting the spaces behind both full-backs brilliantly. With Keïta moving across as a right-sided number 10, the Reds dominated from their right, with Chilwell locked back to deal with any number of attackers. In the end, three goals in less than 10 minutes – a penalty from substitute James Milner, a second for Firmino and one for the sensational Alexander-Arnold – gave witness to the visitors’ total dominance. Their grip on a first Premier League title looks stronger by the game.