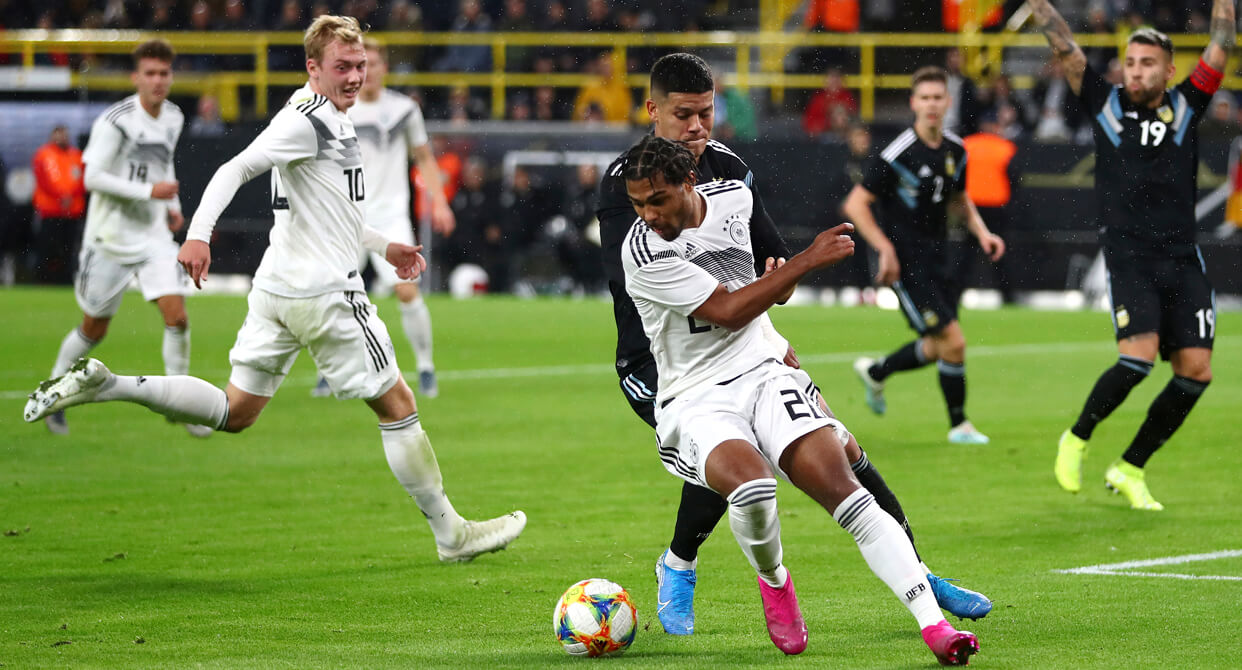 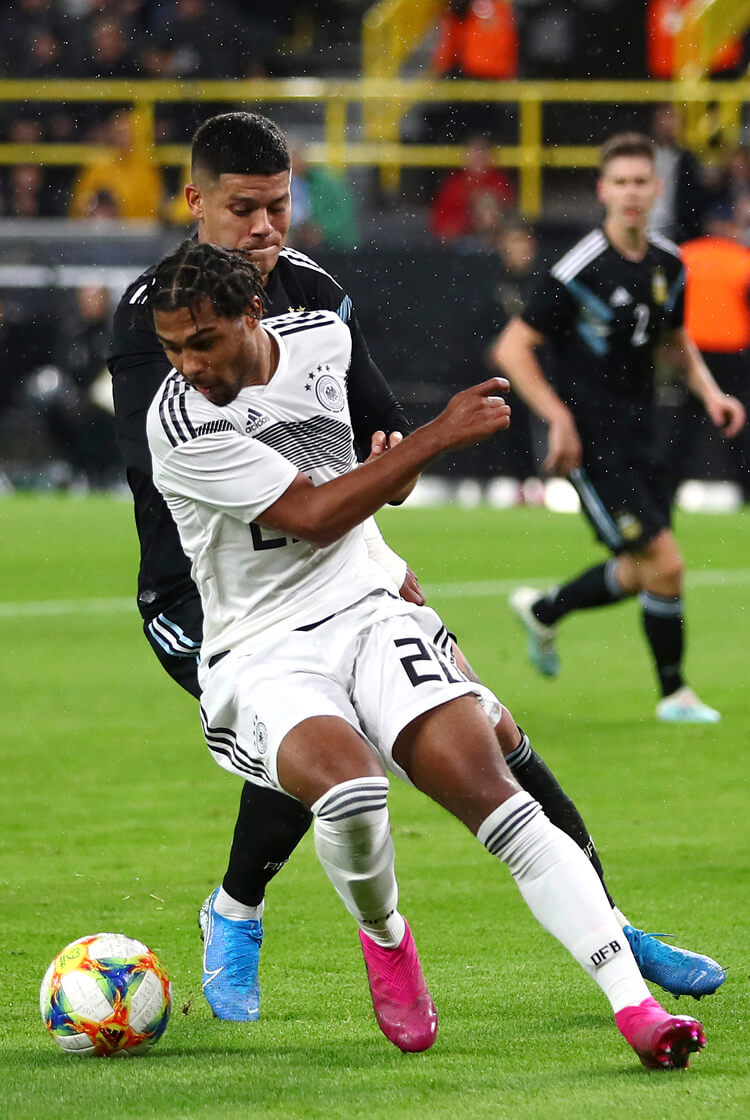 A repeat of the 2014 World Cup final saw hosts Germany play out an entertaining draw with Argentina in this international friendly in Dortmund. Joachim Low’s young side – defender Marcel Halstenberg was the oldest starter at 28 – looked to be in full control when the in-form Serge Gnabry scored one and made another for Kai Havertz in the first quarter of the game. Despite missing the still-suspended Lionel Messi, Argentina slowly grew into the game; a change of formation gave them more attacking menace, with substitute Lucas Acario – who plays his club football for Bayer Leverkusen in the Bundesliga – pulling one back with a fine header midway through the second half. Acario then turned provider for Lucas Ocampos to beat Barcelona goalkeeper Marc-André ter Stegen at his near post to secure an unlikely draw for the visitors. 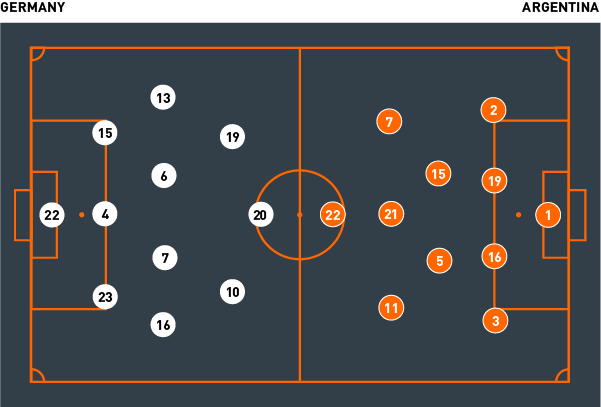 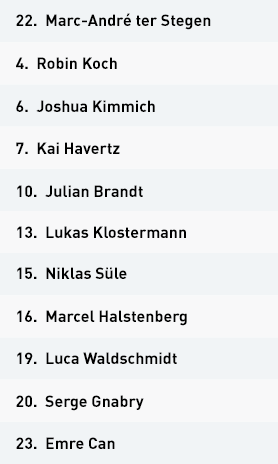 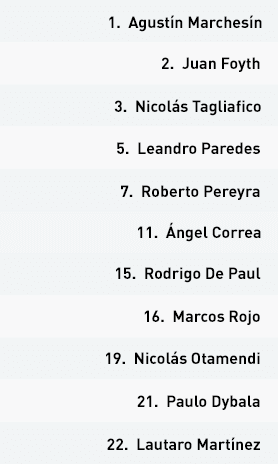 Head coach Joachim Low set Germany set up in a 3-4-2-1 formation, with wing-backs Marcel Halstenberg and Lukas Klostermann dropping into a back five when out of possession. The hosts struggled to build consistent spells of possession early on, and instead looked to quickly transition into attack after a regain. Lone forward Serge Gnabry offered varied movements across or away from Argentina’s central defence, often dragging one of the two away from the central lane. The hosts set up with two narrow supporting forwards inside, who could then push forward into the space Gnabry’s movements created.

Germany actually took the lead through their first real spell of attacking possession high up the pitch. Right wing-back Klostermann made the most of Niklas Süle’s switch of play and crossed low for Gnabry to poke home.

The hosts continued to drop into a 5-2-3 mid-block when out of possession, and proved their threat during moments of transition. Both wing-backs settled into much deeper positions and tracked Argentina’s wingers rather than stepping forward on to the opposition full-backs. From here, a compact back line supported by two central midfielders condensed the defensive third and made it very difficult for the visitors to have any joy at all in attacking areas.

Any mistake in the Argentina build was duly punished, and the hosts soon had a second. Klostermann drove forward after intercepting Marcos Rojo’s attempted nutmeg near the touchline. Gnabry once again moved out of the central lane in transition, dragging Nicolás Otamendi along with him. The Bayern Munich forward released a low drive across goal, for Kai Havertz to tap home his first senior international goal from close range.

Germany’s final-third play benefitted from the central presence of Julian Brandt and Luca Waldschmidt operating behind Argentina’s double pivot in midfield. Any penetrative pass through them drew the central defence forward, with the subsequent gap ideal for Gnabry to run through from a wider starting position.


Argentina eventually changed their structure to match that of the hosts, at which point Germany too shifted into a flatter defensive shape. Their 5-4-1 initially stopped Argentina penetrating in central areas, but with the exception of one counter-attack stemming from an Argentina corner, the hosts’ transitions lost support around a more isolated Gnabry.

In possession, diagonal runs from the wing-backs to receive in behind became a key pattern, while Gnabry dropped around the sides of the Argentina midfield to drive at the centre-backs. Even when one stepped out, however, the visitors’ adjusted shape meant they now had an extra centre-back there to provide cover and stop the German forwards running in behind so freely.

As the game wore on, the distance between Germany’s midfield and defence grew. Even when the hosts formed their 5-4-1 block, spaces between the lines were too easy to find, either via splitting passes after a quick combination or direct clips over Germany’s first line of pressure. From here, the visitors’ central attackers secured and linked possession well, with substitute Lucas Alario a key link between the build and finish. As a result, Germany conceded twice in the second half, as Alario’s header and a late Lucas Ocampos finish drew the visitors level.

In the absence of the suspended Lionel Messi, Argentina set up in a 4-2-3-1 structure, with a double pivot of Leandro Paredes and Rodrigo De Paul occupying central spaces in and around Germany’s narrow forward trio. The visitors looked to work the ball into their deeper full-backs, but the hosts’ wing-backs quickly shut off any forward options in wide areas as Argentina struggled to build around them.

Inside movements from left winger Ángel Correa, and support from central number 10 Paulo Dybala in similar areas, gave Argentina’s deeper players a method to build through the pressure. The German central defence was unwilling to follow either Correa or Dybala, and with De Paul pushing forward to create a more balanced attack the visitors were able to find some penetration in central areas.

Dybala would later shift right to help create a central box in midfield, and looked to receive in and around the sides of Germany’s two central midfielders. The hosts’ use of a back five made it difficult for Argentina to create chances in and around the penalty area, however, and with Dybala and Correa both dropping deeper to help the build the visitors lacked attacking options around main striker Lautaro Martínez.

Out of possession, Argentina dropped into a 4-4-2 shape that worked to negate any significant threat when Germany enjoyed any sustained possession. The visitors’ main concern was their own fragility after a loss of possession. Serge Gnabry’s movements consistently pulled their defence out of shape, with Germany’s supporting attackers able to threaten in the subsequent gaps. The hosts twice punished poor defending to take a commanding half-time lead, with Argentina managing only one swift counter – which ended with De Paul crashing a shot against the post – in return.

The visitors eventually changed formation to match that of their opponents. This worked to hinder much of Germany’s possession, restricting the impact of any supporting movement around Gnabry, and gave them an extra presence behind the hosts’ now flatter midfield line of four. Argentina then looked to play around Germany’s tighter central block, with an excellent supporting run from Nicolás Tagliafico creating the time and space for the cross from which substitute Lucas Alario pulled a goal back with a superb header.

Alario became a continued threat between the lines. The Bayer Leverkusen forward’s ability to secure and link the ball with his back to goal gave his team a crucial attacking element. The double pivot moved off different lines to help disorganise any central press from the hosts, creating further space between the lines to link with the influential Alario.

With frequent changes of tempo in possession, Argentina were able to now break Germany’s block with regularity. Their pressure eventually paid off, as they pinched the ball high and set Alario away to lay off to fellow replacement Lucas Ocampos to grab a deserved equaliser for Lionel Scaloni’s men.