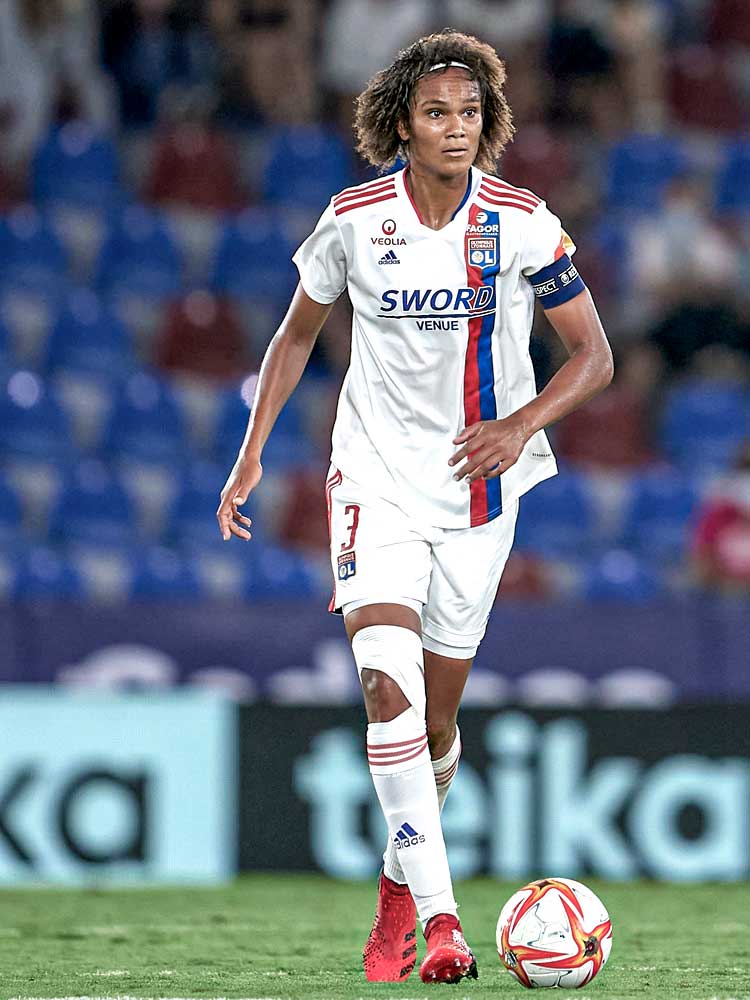 Profile
Wendie Renard had played in nine Champions League finals, winning seven, and set the record for the most appearances in the women's competition when in July 2021 she celebrated her 31st birthday. Once even described as the female equivalent of Virgil van Dijk, she also demonstrates no signs of decline.

"She is a young woman who suffered a lot when she was young, who lost her father when she was eight," Lyon's president Jean-Michel Aulas said of their celebrated central defender. "She was a little disoriented when she arrived at Lyon. She was able to climb the ladder and earn her place with great athletic qualities and a lot of personality. She is the best defender in the world."

Tactical analysis
Renard is proven as both a left and right-sided ball-playing central defender. She consistently executes accurate long-range passes to teammates in wide and advanced territory, potentially to in behind opposing defensive lines to release her desired teammate before the opposition's defence can adopt their defensive positions. Her preference when doing so – not least if she has time and space – is to play diagonal balls either in front of her teammate (below) or directly into their back foot, to complement their forward runs, and she is at her most effective doing so towards the back of the midfield third. From a greater distance, opponents are likelier to make regains.

If her favoured long-range forward passes are unlikely to succeed and she is playing in a back four, Renard instead seeks to find those capable of creating passing lines to those further forwards – perhaps to the back foot of a full-back, or into the feet of a wide forward withdrawing into deeper territory. She then often moves to provide support to those further forwards and to remain available to rebuild attacks, potentially from the base of midfield, from where she can change the point of attack.

Her composure and confidence under pressure contributes to her ability to mostly make well-judged decisions at the correct time; she, similarly, uses opponents' momentum against them, if they resist decelerating when approaching to press or challenge her, by taking a touch into space and then driving forwards. If she is consistently confronted with intense pressure there are times she makes errors in her pass selection, and her body shape can make her easier to read, leading to interceptions being made.

In the final third she poses an attacking threat – particularly at set-pieces delivered, with accuracy, into the penalty area (below). Renard can regularly be seen adopting positions at the back post, from where she uses her height and strength to head crosses back across the face of goal to create goalscoring chances for others or times her run across an opposing defender to instead head at goal.

When she is required to defend, Renard impresses in anticipating forward passes from her opponents, and in moving with the opposing number 10 to compete for the ball from the most advanced possible territory. She defends with flexibility, adjusting her positioning in response to the opposition (below) – hence her ability to play towards the left or right of a back four, or in the centre of a back three. That anticipation contributes to her intercepting forward passes, potentially between defence and midfield, and supporting full-backs' attempts to keep possession wide. Should an opponent seek to beat her one-on-one, she may even respond by using her body shape and positioning to screen forward progression and steer the ball backwards or wide.

She defends with a measured aggression that means she refuses to give her direct opponent time to turn or settle in possession, and is then appropriately forceful and powerful when engaging for the ball. If that opponent successfully receives passes, Renard seeks to steal possession when that opponent drops their head or misplaces a touch. Her frame contributes to her effectiveness when duelling one-on-one, before which she attempts to observe her surroundings. Her technique of using her foot or leg to win the ball can lead to teammates picking it up; should an opponent penetrate beyond her team's defensive line, Renard's speed and power can match theirs, and is enhanced by her using an arm or shoulder, and potentially the touchline, to block their forward movements.

Role at Olympique Lyonnais
Renard is most consistently selected at the centre of Lyon's back three when they are organised into a 3-5-2, and as the left-sided central defender at the base of their 4-1-4-1 and 4-3-3. She often contributes to dictating play, and is crucial to the regains they make and to them transitioning into attack.

Their personnel are often tweaked, as is determined by their opponents' strengths and weaknesses, but Renard is mostly selected alongside fellow central defender Kadeisha Buchanan. She regularly has numerous options when she is seeking to progress possession, whether doing so around opponents via a full-back or between them and into midfield (below), where Melvine Malard and Delphine Cascarino, whether wide or central, are often her targets.

Renard supports attempts to build attacks by occupying a central space and remaining the correct distance from those also in Lyon's back four. They seek to stretch the pitch as wide as possible, via their central defenders spreading to almost the width of the penalty area (below), and their full-backs advancing into midfield.

Upon playing the ball Renard moves to attempt to create a safe passing line for it to be returned to her. Should her defensive teammates move across the pitch she will also move with them, regardless of her favoured position, to provide cover and maintain their sense of balance, and does so in the knowledge that a central midfielder is also likely to withdraw into deeper territory to offer cover.

That influence extends to their set-pieces, when she often changes the direction of crosses aimed towards the back post. Even if their execution if short of quality, her positioning draws the attention of opponents, and therefore potentially creates goalscoring opportunities for those around her.

Her consistency is similarly essential to their ambitions. Renard's positioning, anticipation and decision-making largely organises Lyon when they are defending, and gives those around her the confidence to make regains and transition into attack with speed. When she is the one with the ball at her feet her patience and composure under pressure means she also regularly contributes or even leads their attacks.