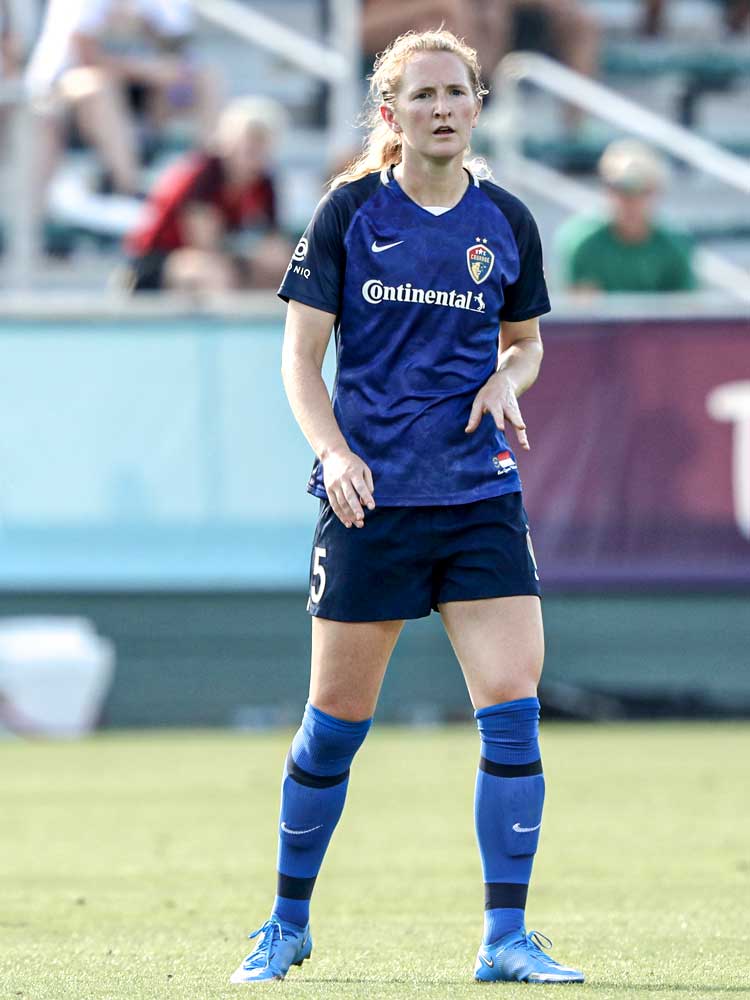 Profile
The return of Sam Mewis to North Carolina Courage, after a year with Manchester City, reunited Courage with one of the world's leading players who, in her previous three seasons with them, played a significant role in them winning two NWSL titles and three NWSL Shields. Aged 28 when her return was confirmed in May 2021, she also moved while remaining at her peak.

"She has matured into one of the most inspirational and talented players in the game," said Courage's head coach Paul Riley. "With her ability to penetrate with the ball, her range of passing and her tactical acumen, she has the ability to control the tempo and completely influence games. Most importantly, Sam will bring out the best in other players."

Tactical analysis
Mewis is a rounded midfielder at her best supporting attempts to build play through the midfield and attacking thirds. She links play across midfield, and regularly delivers penetrative passes for her teammates to run on to and then either play crosses or shoot at goal. She can also change, in an instant, the speed of her team's build-up play by driving passes between opponents to release teammates into space, and can be effective in both central and wide territory; it is in the latter, if time and space exists, that she relishes running at defenders.

Ahead of receiving possession she scans for space (below) to create a clear picture of her surroundings and the movements of her teammates and their direct opponents, ensuring she can quickly choose the correct pass and undermine her opponents' attempts to delay her or to press her. If the target of passes from the defensive third she uses her body to protect the ball from opponents approaching her and then quickly turns and plays it into space in behind. It is that composure under pressure that contributes to the quality and accuracy she consistently demonstrates.

Should her desired passing options not exist in the final third, Mewis adapts by moving to play narrowly outside of the width of the penalty area, from where she seeks to provide crosses from angles that are difficult for opponents to defend. Targeting teammates making forward runs, she favours bending the ball into the spaces between defenders and the goalkeeper behind them, or to between the deepest-positioned midfielder and the opponents' defensive line.

She demonstrates that same potential when attacking one-on-one, when she shifts her centre of gravity and uses both feet to deliver quick changes of direction and pace to create space to play forwards into her more advanced teammates. That opponents often attempt to defend against her with numbers (below) in turn increases her teammates' freedom and space, not least because opponents recognise the threat she can pose from in front of goal. When her teammates are the ones targeting her they can often read her intentions from her body shape and the speed with which she moves; she, similarly, can use her technical ability to score from distance and to effectively take set-pieces, when the flexibility she possesses to bend the ball with her instep or strike through it with power makes her more difficult to predict.

When she is required to defend, Mewis proves capable of making regular regains. She performs with control and restraint, and yet with the necessary tenacity to recover the ball and to support quick transitions. She also willingly withdraws into deeper territory to make defensive contributions (below), perhaps to approach opponents on their blindside and use her strength to steal the ball if a pass has been poorly executed or before it has been controlled.

If unable to make regains or to create a barrier between opponent and ball, Mewis, fittingly for a player with her tenacity, will consider committing fouls in the midfield third, potentially by pressuring an opponent from behind instead of from towards their side.

Role for North Carolina Courage
Mewis is established as one of the holding midfielders in Courage's 4-2-2-2, in which she demonstrates variety in linking play from defence to attack. She consistently seeks to receive possession from the defenders behind her, and then to play it on to those advancing in front of her; from the deeper position she operates in, compared to that with USA, she is presented with an increased number of opportunities to play to ahead of her teammates and in behind opponents (below), which means that as one of her teammates the fast Lynn Williams can particularly thrive.

When she travels forwards with the ball at her feet and with pace, Mewis favours playing passes into the channels that her teammates can run on to. There is, regardless, variety to the nature of shorter passes she plays from central territory, where she combines effectively with Debinha, and from where she seeks to target spaces between central defender and full-back.

When her team is attempting to attack, Mewis uses her first touch to create space and, when the ball has been played from behind her, to take a forward-thinking action. During most matches she drifts into different positions across midfield, mostly to deliver crosses from deeper positions in the channels, or to combine via quick passes, centrally. Her movements regularly take her to between the lines, and contribute to her ability to use her body to protect the ball.

She offers the greatest potential when receiving possession from wide and while advancing from her deeper starting position, because of the awareness it gives her of her opponents' positioning and shape, and therefore ability to play penetrative passes with accuracy and pace. Long forward passes can stretch opponents if she resists quick combinations or travelling forwards with the ball at her feet to draw opponents towards her before releasing it.

When Courage are defending, Mewis contributes to their attempts to remain compact by attempting to ensure the distances between her and her teammates are as they should be, tempting opponents to play around their mid-press. If the ball is conceded close to her, she'll, similarly, react quickly to apply pressure and challenge their opponents' ability to organise themselves.