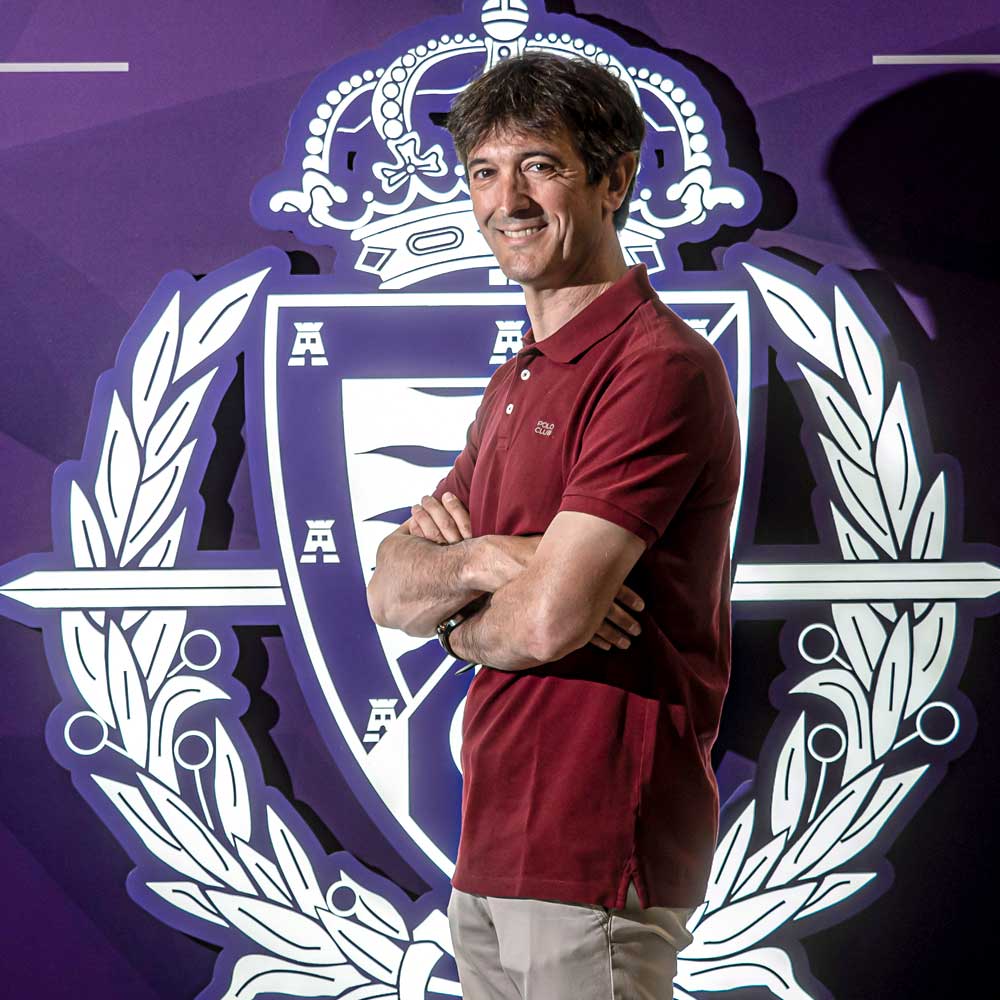 The first day I arrived at Real Valladolid, I uploaded the team's crest on my WhatsApp profile.

I didn't do it because of any superstition or anything like that. I did it because it felt right. It was a way of identifying myself with the team from the first minute. It was also a sign of respect and gratitude to the club that had put its trust in me.

I arrived at the club in June 2021, after a series of unplanned events.

Often, opportunities arise like that – and, luckily for me, this has worked out really well. It has been really good. I am living in one of the happiest times of my life.

After Huesca, I was keeping an eye on two potential offers from Primera División teams. The offers never materialised, though, and the clock kept on ticking. That always makes you nervous.

In the end, something happened to bring me to Real Valladolid. The team's sporting director, Fran Sánchez, had previously been at Granada, and he had wanted me to manage the club. When he moved to Valladolid in the summer of 2021, he asked the club to hire me as their coach.

Sánchez wanted me at Granada, and he didn't change his mind when he arrived here. I will always be grateful for that.

"Is there a secret to my two promotions in three years? Yes. the secret lies in Conviction"

And so began a journey that culminated in promotion to La Liga a year later, in the last minute of the last game of the season. Incredible!

It was a long, beautiful road, but one that was also very difficult for many reasons. In those difficult moments, I always found the support of the president, Ronaldo.

I think that's when you see the real side of people, and Ronaldo always believed in what we were doing. He never decided to intervene; he just let us do our thing. He believed in my work, and that promotion would be achieved.

I am a person who never gives up.

Not even when many people thought that we no longer had a chance of promotion after the defeat against Xabi Alonso's Real Sociedad B, with only four games of the season left.

But I refused to think like that. I didn't care what others thought.

"For me, the best coaches are those who manage conflict best"

I have earned two promotions to the Primera División in the last three years – first with Elche in 2020, and now with Real Valladolid. Is there a secret to this? Yes, the secret lies in conviction.

At Elche, it was all about hope because it was not expected. The team weren't really aiming for promotion, but we achieved it because we had motivation and conviction.

At Valladolid, it was different. There was an expectation of promotion. This is a big club – the team with the 13th most years in the top tier – but, on top of that, we were also sure that we would achieve it.

In addition to that, you must have a plan, and focus on the present and the near future. Results always come through a process. And, in that process, the key is a belief that you are going to achieve your goals.

That's the message I gave to the players after the defeat to Real Sociedad B. There was little time left and, yes, there was a gap to close – but we still had more than enough to win promotion if we did things the way we had to.

As a coach, I continue as I always have. I know that a coach has to work hard, but that's not all coaching is about. A coach is also hired to make good decisions.

"I came from a village of 1,500 inhabitants where we had nothing. Not even a proper field to play football on"

I liken training to high-performance work, because of the type of work we do. In the end, a team is about personal relationships and group dynamics.

For me, the best coaches are those who manage conflict best. This is the key.

And I always try to retain a positive outlook on things. If you are positive, you will transmit positivity to your players.

In the hours leading up to the last game of the season, I visualised promotion. Obviously, nothing quite so dramatic and with so much emotion, but I did think positively. Why not? It's not worth giving yourself a negative mindset for no reason.

And, if things go bad, then you can think about dealing with the bad times.

I've done it that way all my life. I look at the future I want with a very positive point of view.

I came from a village of 1,500 inhabitants where we had nothing. Not even a proper field to play football on. We played on a field where grain was harvested.

"Valladolid is never a step back for a coach. It is a real step forward"

There was no academy to join, and at 20 I was still working as a carpenter. It wasn't until I was 26 that I made it to La Liga.

But I always had faith that I could make it.

As a coach, I have a lot of things in mind that I want to achieve. Either they will happen or they won't, but I know I'm on the right path. I want to coach good teams with the best players and, above all, with players who inspire ideas in me about the game.

I am a dream chaser, regardless of what I have to do to achieve them.

That's why I went abroad for four years. As things weren't going as I'd hoped or expected in Spain, I decided to go to Poland in 2013 to manage Korona Kielce. And in 2016 I went to Thailand to work for a year at Ratchaburi FC. I never considered either as a backward step back in my career. It was what I had to do to progress.

Valladolid is never a step back for a coach. It is a real step forward.

I have experienced the other side of football. With Huesca, we were relegated to the by a goal. We had to beat Valencia to survive in the top division, and we drew 0-0.

With Valladolid, funnily enough, we were promoted thanks to a goal scored by Alcorcón against Eibar, the other team involved in the race for promotion, in the last minute of the season.

The feeling of being promoted in that way was incredible, although it doesn’t quite get rid of the pain of relegation with Huesca. That will always be in the back of my mind. We had it in our hands and we lost. It was very tough to take.

I admit that I am still not great at handling those bad moments. When I lose a game, I immediately know I'm going to go hours without talking to my family or my friends.

I know I have to manage those better, because my family shouldn't pay for my pain. I hope that, with time – I consider time a great ally in these situations – and experience, I will be able to deal better with defeats.

It's about learning, just as it is about victories.

"I make sure to live in the moment with a lot of feeling, a lot of emotion and a lot of passion"

This promotion has shown us what we are capable of.

That's why you have to let yourself go and enjoy moments like this, because you won't get many like this in your life as a coach.

You have to be happy. Of course, the time will come to think about what will happen next, and the first game in the First Division in the 2022/23 season.

I don't make any more plans than that –  just the present and short-term future. I make sure to live in the moment with a lot of feeling, a lot of emotion and a lot of passion.

And, in case you're wondering, the Real Valladolid crest, of course, is still on my WhatsApp profile.