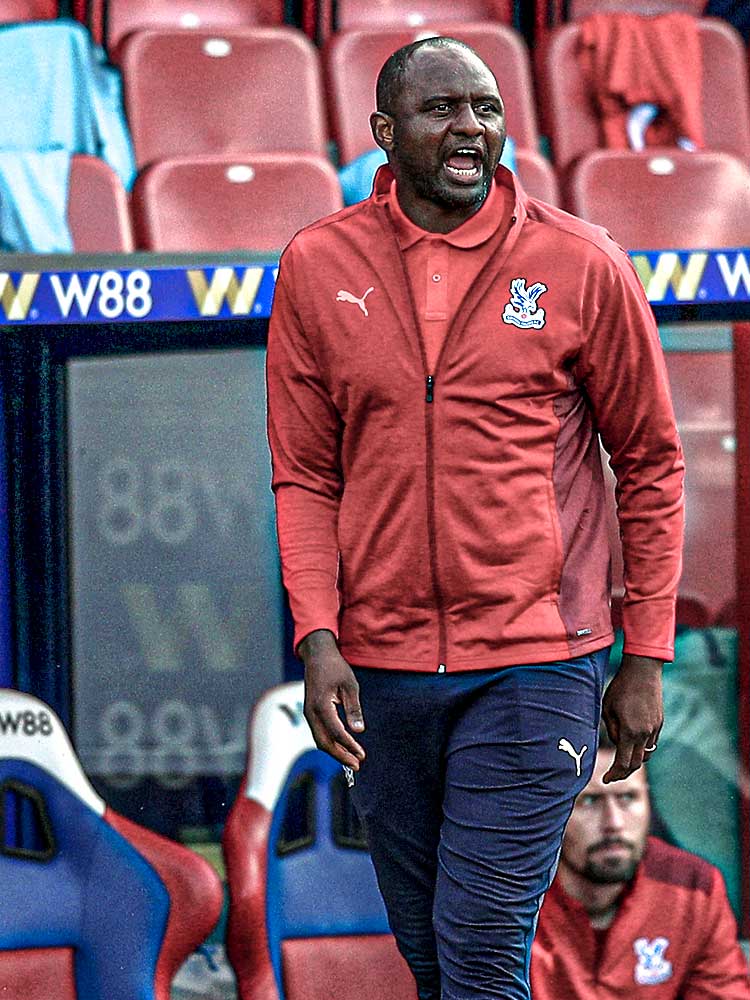 It is four years since Crystal Palace took a gamble on a young but largely unproven European coach with an exemplary playing record. The Frank de Boer project lasted only five games, so badly did it go, but after four seasons under the steadying hand of Roy Hodgson, Palace have thrown the dice once more with the appointment of Patrick Vieira.

Vieira is no tyro, however, having spent more than two years in each of his head-coach roles to date – first with New York City in MLS, and more recently with Ligue 1 club Nice. In both jobs he has shown that he can be flexible with his structures and ideas, while also gradually working towards a clearer playing style. Although using a variety of formations that can change when in or out of possession, Vieira has come to favour a 4-3-3 formation (below) coupled with a possession-based approach and aggressive, higher defending.

Playing a high back line is a prerequisite of that aggressive defending, with the aim of pinning the opposition in their own half and thus establishing a more dominant style of possession. The recent departures of Gary Cahill, Patrick van Aanholt and Mamadou Sakho, all the wrong side of 30, can certainly help Vieira initiate a shift away from the mid and lower blocks more commonly employed by Hodgson. The arrivals of the highly touted former Chelsea youngster Marc Guéhi, fresh from a successful season on loan at Swansea, and Denmark international Joachim Andersen also give Vieira added mobility in what will be a new-look central defence.

That said, the Frenchman will also need to address the 66 goals conceded last season – the most since Palace returned to the Premier League for 2013/14 – while working out how to improve on a record of 72 goals scored in 76 league games across the past two seasons. Fewer than one goal a game tells its own story – Palace have been among the league’s poor relations for chance creation for a number of seasons.

Both Guéhi and Andersen have the potential to contribute in that regard, with accurate long switches to their far-side winger. They can also play more central penetrative passes when needed, and should give Palace a much stronger foundation during deeper builds.

Further forwards, Christian Benteke’s improvement in the second half of last season – he scored seven goals in his last 13 Premier League appearances, including four in four to end the campaign – could be key to Vieira’s new ideas with Palace. Benteke offers the natural presence of a target man to receive direct forward passes into the front line, and can attack a variety of balls into the penalty area. Within Vieira’s possible 4-3-3, he may also have to drop shorter to link with wider runners or any one of the elusive and penetrative dribblers that Palace have in abundance – Wilfried Zaha, Jordan Ayew, long-term absentee Eberechi Eze and the exciting Michael Olise, signed from Reading.

Benteke also demonstrated an encouraging commitment to higher defending last season, registering some of his best Premier League returns in areas such as tackles, ball recoveries and an overall willingness to regain possession in the final third. Vieira may focus on this improvement as the starting point for his new team’s higher defending, with the pace of Palace’s wider players a useful asset when pressing aggressively inside the opposition's half.

All eyes will be on the new manager as he embarks upon his first campaign as a Premier League number one. If he can successfully implement his new style on one of the league’s more traditionally attritional teams, however, then it certainly won’t be his last.