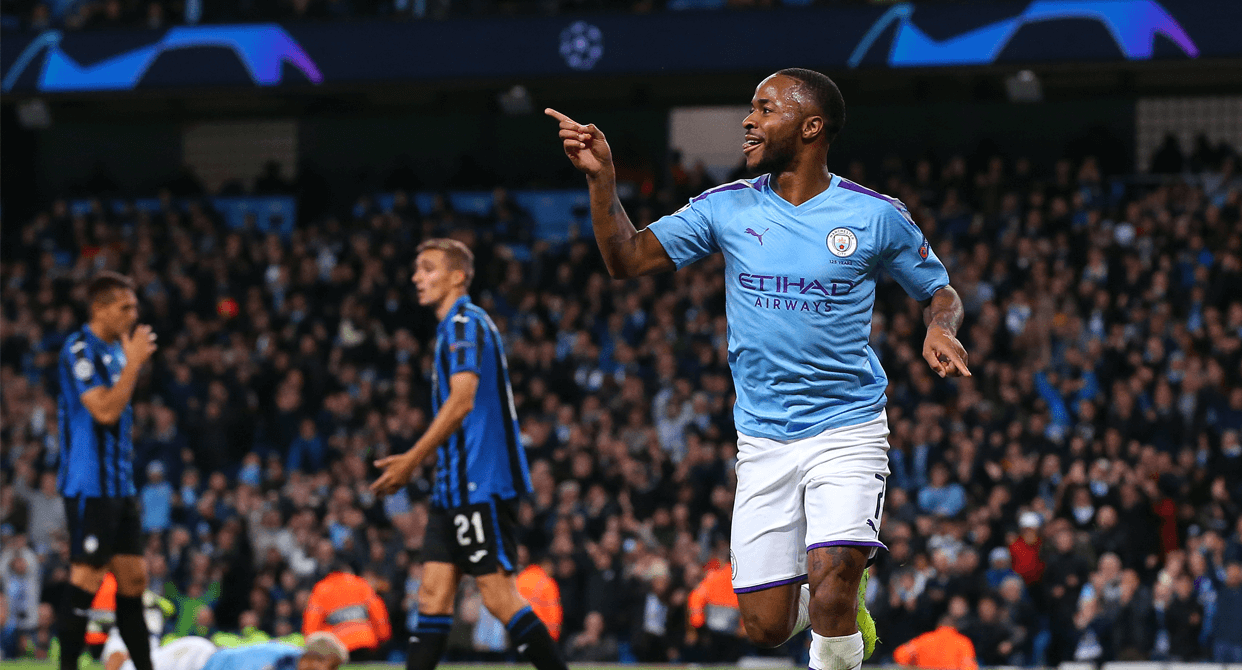 Gameweek 3 of the group stage represents the point at which Champions League ambitions can be ended, but for some teams it also featured some interesting tactical and selection adjustments. Naturally, The Coaches’ Voice team of professional coaches have revisited the tactical stories that underpinned some of the week’s most significant results.

Manchester City 5-1 Atalanta, Group C
The margin of victory may have suggested Pep Guardiola's team eased to their third victory from three in Group C – but they only did so having been forced to adjust to overcome Atalanta's high-pressing 3-4-2-1 formation. City often register their first attempts on goal during the opening minutes, but their visitors' approach meant that they struggled to create goalscoring opportunities.

Guardiola started with a back three made up of Kyle Walker, Fernandinho and Benjamin Mendy, behind the double pivot provided by Rodri and Ilkay Gündogan, but Atalanta's narrow attack occupied that back three, ensuring City struggled to progress into their half. Marten de Roon and Remo Freuler covered forward passes being played by Walker and Mendy; with City's attackers too far away to connect with, they struggled to penetrate through midfield.

It required a change to a back four, with Rodri withdrawing alongside Fernandinho, for that to change. Kevin De Bruyne moved alongside Gündogan in central midfield, which worked to free Walker up from the attentions of Freuler (above). The distances to Walker and Mendy became too great for Atalanta to cover, and contributed to spaces being created further forward for the dangerous front three of Raheem Sterling, Sergio Agüero and Riyad Mahrez.

Galatasaray 0-1 Real Madrid, Group A
Real Madrid secured their first Champions League victory of the season in Istanbul, but it will likely be a concern to manager Zinedine Zidane that their hosts succeeded in creating 11 goalscoring chances. They did so largely because of his opposite number Fatih Terim's preference for a 3-5-2 shape, and their wing-backs' ability to draw Real full-backs Marcelo and Dani Carvajal out of position. This in turn created spaces in central positions (below), with further movements from forwards Ryan Babel and Florin Andone serving to increase those spaces.

The Real midfield defended lethargically – which, combined with Galatasaray's reverse passes and disguised play, increased the hosts' attacking potential. That they also committed players forward in pursuit of a second goal contributed to attacking transitions, in which the injured Radamel Falcao may have proved more ruthless.

Genk 1-4 Liverpool, Group E
Alex Oxlade-Chamberlain was particularly influential for the reigning European champions, having previously not convinced since his return from a long-term knee injury. He provides a long-distance shooting threat the Reds largely lack elsewhere; when he adopts a position as an advanced number eight, he troubles defences that are uncertain whether to press him or not.

Advancing towards him risks leaving the dangerous front three of Mo Salah, Sadio Mané and Roberto Firmino three-on-three against the remaining defenders; with Firmino impressive at dealing with pressure behind him when he attempts to receive, and both Mané and Salah fine runners and finishers, Oxlade-Chamberlain potentially gives an already-strong attack a further dimension. Opponents unwilling to leave the front three free risk allowing him the space to shoot from midfield – exactly as he did within the first two minutes against Genk (below).

Oxlade-Chamberlain's advanced positioning can also stop opponents restricting access to Firmino when the Brazilian withdraws into midfield. Similarly, Salah can potentially be freed up to adopt the wider position he had throughout his first season at Liverpool, but which has since become more central. As Genk demonstrated, however, Oxlade-Chamberlain also struggles to provide the same defensive cover from midfield that their adventurous full-backs usually enjoy.

Inter Milan 2-0 Borussia Dortmund, Group F
Lucien Favre's decision to experiment with a back three backfired for the visitors on Tuesday, who struggled in Milan and are therefore at risk of elimination from perhaps the most competitive group in this season's competition – one which also features Barcelona and Slavia Prague. Dortmund's 3-4-3 was not vastly different to the 3-5-2 Antonio Conte favours with Inter Milan, but their tame attacking play was frustrated by their opponents' impressively organised mid-block.

Dortmund's attackers wanted possession played to feet so they withdrew into midfield, but with defenders Mats Hummels and Manuel Akanji advancing into the same territory they were instead suffocated; against Inter's press, the visiting attackers struggled to penetrate through congested areas and into the final third.

The hosts thrived with movements away from the ball, and into the spaces beyond Dortmund's mid-block. Wing-backs Kwadwe Asamoah and Antonio Candreva advanced high and wide, and their attackers progressed into threatening positions (above), ultimately making them significantly more effective.