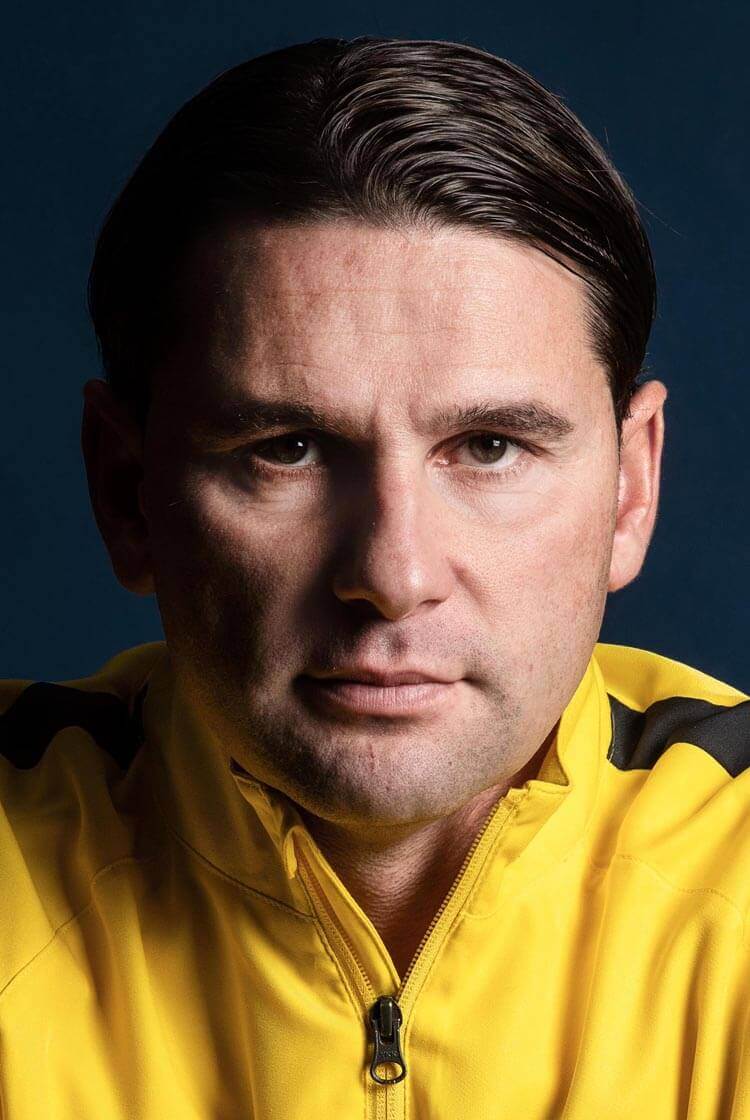 The more time you are in this job, the more you understand that you know nothing.

You’re always seeing new things. Realising that what you did is already old, so you have to constantly change.

A coach who is not changing is a coach in danger.

As a player, you learn how important it is to adapt. I was 19 when I left my home in Switzerland to play for Deportivo La Coruna in La Liga.

Galicia was a place I knew very well. It’s where my parents are from. Every summer we would spend five or six weeks there, along with many other families that had emigrated to Switzerland in the 1960s.

The language was no problem for me. Growing up in Switzerland, we learned German, Italian and French at school – but at home my parents spoke only in Spanish to me and my brother. They worked in a textile factory in Lucerne, along with many people from Spain, Italy and Portugal, and we lived in the same buildings as these families. Although we were in Lucerne, really I grew up in a Latino community.

I had always wanted to play in a big championship, like in Spain, Italy or Germany. But I was a bit surprised that a club such as Deportivo picked me. Perhaps, after they saw me play, they discovered that my parents were from the same part of Spain as the club... maybe that helped them to decide.

It was strange at first, leaving my parents in Switzerland while I lived in the place they left all those years ago. It was not like being at home. I needed to adapt.

Deportivo was a mid-table club when I moved there. But, from that moment, they started to go up: we finished sixth, then first, second and second again. A lot of big players came to the club. For me, it was difficult to play in the first team.

If I look back, I ask myself if it was the right decision to go? It felt like the right one at the time.

"Even at the highest level, with a lot of pressure, Hitzfeld remained the same – calm and composed"

I was a different player when I returned home. The way they trained, the way they built up the trainings in Spain – it was all completely different to how they did it in Switzerland. There was more training with the ball. More small-sided games.

These days, there are not such big differences in the ways people train across the world. Now, you can see training sessions everywhere. You can make more contacts with social media. Everybody is growing with this new information.

But 20 years ago, there was a big difference in how people trained.

Everything you experience in your life makes you grow up. Changes your mind. I liked the way the Spanish teams trained because I was sure this was the way to have fun. Not to run without the ball or just to train physically, but to try and mix this stuff all together.

In the same way, everyone you meet gives you something of value. From every one of my coaches, I kept good things. One might be good in tactical approaches. Another maybe in personality relations.

Ottmar Hitzfeld is someone I never worked with, but when I started doing my coaching licences I was watching him a lot. He was coach of Bayern Munich before the Swiss national team, and I really admired the way he went about things.

Even at the highest level, with a lot of pressure, he remained the same – calm and composed. And always with big respect for the players and the other coaches.

"Behind the scenes, you can learn a lot. Once you arrive at the top, you don’t have any time for that. You have to perform"

I was 32 when I retired from playing, but I had a plan even from the age of 25 to start coaching. Actually, my first idea was to be a PE teacher because I like to work with people – to help them grow up and develop. This was a big passion for me.

So I knew I wanted to start my coaching career with young players. Players I could develop and give my experiences to.

I was lucky that my last club, Luzern, gave me the opportunity to do that. Straight after I finished playing, I was working with their Under-15s. It was a whole new world to me, because the language that you speak with children of 13 or 14 years of age is not the same as with a professional.

It had always been clear to me that playing and coaching were two different jobs. But in this period, I realised just how much there was to learn. Each day I went home thinking: oh, I know nothing.

That’s why it’s important to have this time to learn. I spent six years coaching in the youth – working my way from the Under-15s to the Under-18s and, finally, the Under-21s. At every level you learn to coach different things: the basics of technique with the youth, then the tactical elements with the Under-21s.

At the same time, I was also trying to learn more about management, leadership and communication. It’s good to do these things while you are not in the focus. Behind the scenes, you can learn a lot.

Once you arrive at the top, you don’t have any time for that. You have to perform.

Leadership and management are things you can learn outside football as well. At home, when you have children – how you manage this. Or how you react when you are stressed. These are all things you can train every day.

I worked with people outside the sport to help me, too. One helped me learn how to deal with the media – how to make sure I deliver my message in the way I want. I saw another person to help me with my relationship with the players.

You can learn a lot before you become a manager, but it is a process that is never finished.

"Was it the right decision of the club to give me a chance in this situation, with the team two points from relegation?"

When Luzern asked me to take over as manager from Markus Babbel at the start of 2018, I felt ready for it.

I’d had some offers over the previous 18 months, for managerial jobs in the second division in Switzerland and from some small teams overseas. But I hadn’t said yes because I felt I was not ready.

For me, it was clear that now I was – and that this opportunity to work in my hometown was the right one.

We were on our mid-season break when I took over, so I had four weeks to start a new preparation with them before our first game against Lausanne.

I was really clear about what I wanted to do. I’d had a good relationship with Markus and I knew the players – a lot of them were developed in the second team I had coached. I knew what was good from the team, and what was bad.

Maybe it was just the right time to change the coach. Not the work of Markus, because he’s an excellent coach and did an excellent job. But maybe after three years the team just needed a new voice.

If you looked at the league table, things were not so good for us. Inside, though, the team was very strong. The work that had been done with them physically, technically and tactically was very good. In this sense, I was lucky.

But I think every coach has some changes, wants to bring in new things. Like I said, a coach is always in danger if you’re not changing. You have to break the routine. Maybe after three years with one team, your book is finished and this becomes more difficult to do.

After four weeks of pre-season, the pressure was building. Big pressure on the team and on me: a young coach in his first job. Was it the right decision of the club to give me a chance in this situation, with the team two points from relegation?

In our first game against Lausanne, you could feel the pressure on everybody. I felt it – a big responsibility.

To get the victory at home felt good for all of us.

"With Luzern, you are always playing for mid-table or fighting relegation. Here, you play on the top"

From there, we climbed the table to finish the season in third position.

I put everything I had into the job. A lot of passion. Big emotions. But that is not enough. You can win one game, maybe two, with a lot of emotion. But to keep results high takes more than passion. It’s also work.

The biggest work I did was on the relationship with the players. Putting them in a situation of confidence individually increased the confidence of the whole team.

When I moved to Young Boys in the summer, I was coming to a team that had just won the Swiss league for the first time in 32 years.

It’s a big honour for me. I knew it was a club that offered more possibilities than in Luzern. It’s a bigger club: more staff, more structure. There is scouting and more possibility of money to build the club. You also have the big challenge of trying to win the title. With Luzern, you are always playing for mid-table or fighting relegation. Here, you play on the top.

The club has their own reasons for choosing a coach. I think, when Young Boys chose me, they saw that I was someone who would continue to develop the team in the same direction they had built it. That’s better for me, too, because I don’t have to do something that’s not me.

It was a big challenge. After winning, I think to continue to win is just as difficult as to start winning after you lose.

The possibility of a place in the Champions League group stages for the first time was a big argument for us to keep the players who maybe had offers from other teams.

When we saw the draw for the playoff round, we knew we had a chance to make it. Dinamo Zagreb is a traditional club with experience in the competition that we didn’t have, so we knew it would be difficult – but we felt we had a chance.

At half-time in the second leg, we were a goal behind, 2-1 down on aggregate. I felt we were missing a bit of courage. A bit of personality.

My target at half-time was to try and take them out of this depression. To take off this handbrake that was holding them back. To encourage them to play this like a football game and not like something bigger. Encourage them to take more risks.

“Go out and show the people you can play better.”

As we went out for the second half, I had a good feeling from the players.

You are too close to the game at that time to realise what you really feel. The real emotion came a bit later.

It was a big satisfaction to get it done. It has been an honour to be in the Champions League – and for us, as a small team, a big challenge too.

But we are adapting. Learning. For us all, it’s a process that is never finished.