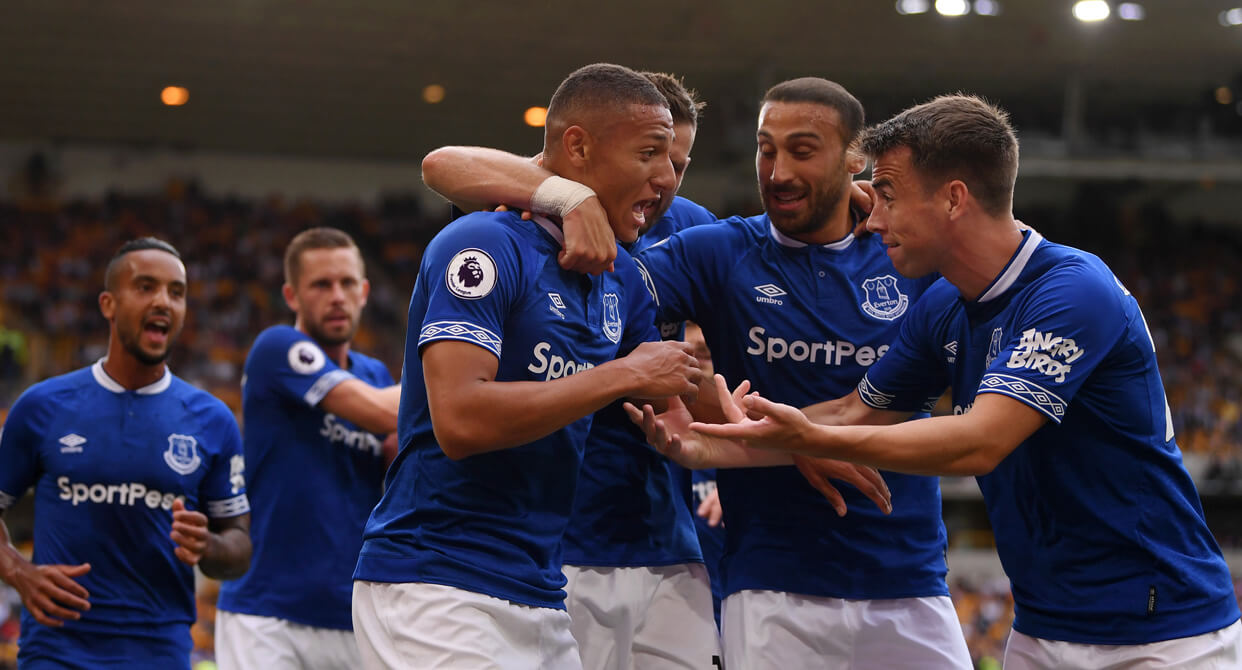 Newly promoted Wolves twice came from behind to earn a point against 10-man Everton in an entertaining draw at Molineux. There were plenty questioning the Toffees’ decision to spend a potential £50m on Richarlison from Watford earlier in the summer, but the 21-year-old didn’t let that affect his performance with two goals on his Premier League debut for his new side. The young Brazilian stabbed home the first from close range in the first half, and then replied to Ruben Neves’ fine free-kick with a sublime second to restore their lead in the 67th minute. Everton had been reduced to 10 men when Phil Jagielka was dismissed for a dangerous foul on Diogo Jota shortly before half-time, but they will have been frustrated not to come away with the three points. On-loan Benfica forward Raul Jimenez rescued a point for Wolves with 10 minutes remaining; manager Nuno Espirito Santo will have been impressed by the character his team displayed. 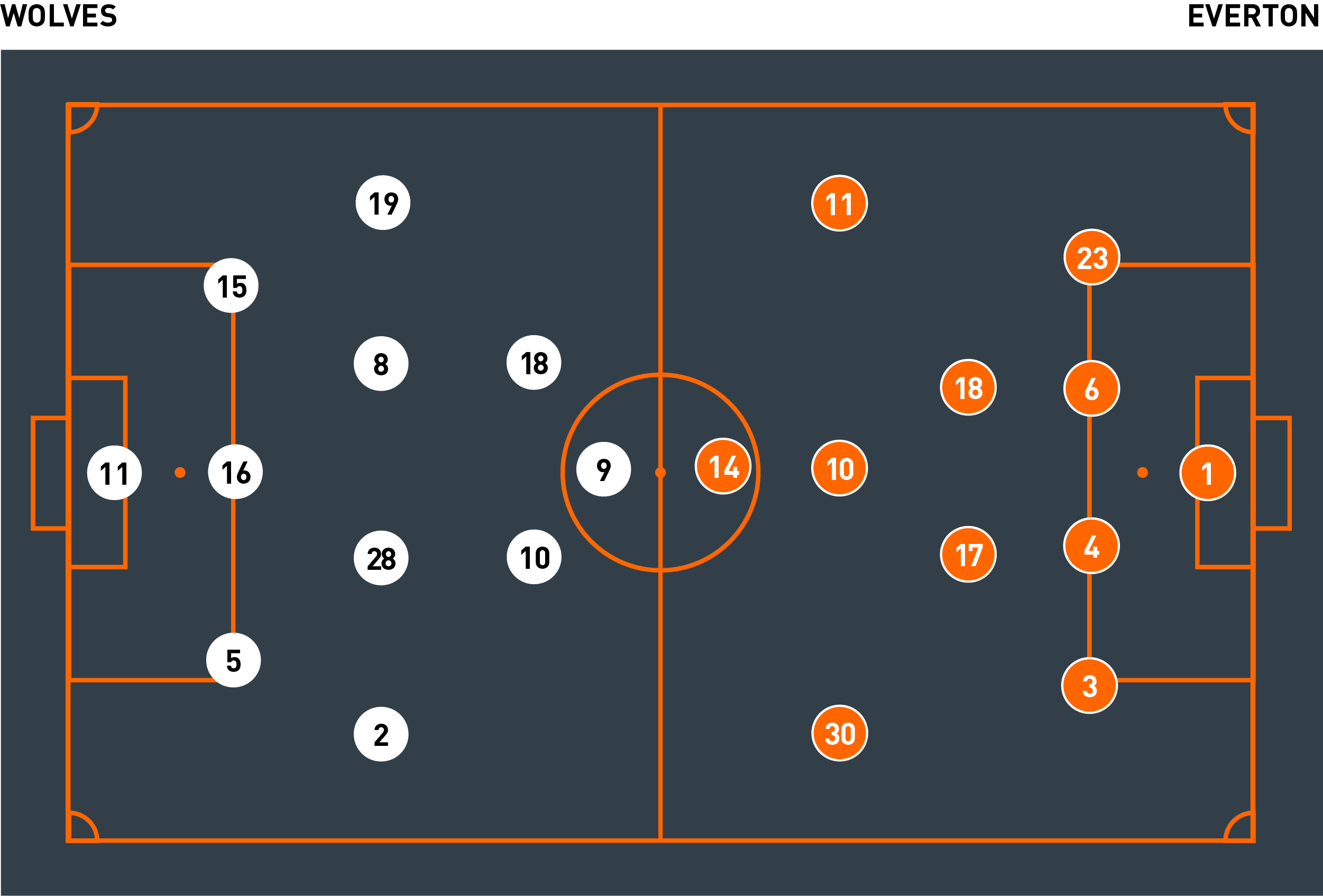 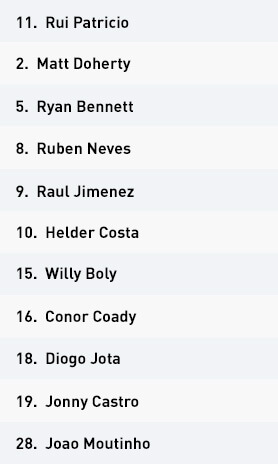 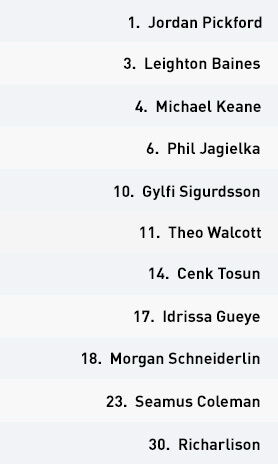 Wolves set up in a 3-4-3 in possession and enjoyed the majority of it for large parts of the game. Joao Moutinho and Ruben Neves, the two central midfielders, would dictate the play, receiving from the centre-backs before looking to distribute the ball to the attackers. The wing-backs Matt Doherty and Jonny Castro would advance high up the pitch, pushing wide attackers Diogo Jota and Helder Costa inside to play closer to Raul Jimenez and pin the Everton back four back in the process.

The movement of the front three was dangerous and posed problems for their opponents. Jimenez would often look to threaten in behind, while Costa and/or Jota would come short. This resulted in Everton’s back line having to drop or hold their position as a unit – either way, a Wolves player would be able to get on the ball. On other occasions, Jimenez would drop in and the other attacking players would look to run beyond him.

While play would build on one side, it would be common for the far-side attacker and the advancing full-back to overload the Everton full-back. As a result, the long, diagonal pass (another common feature) would reach the widest player when the opposition full-back stayed put, or if the full-back pressed the ball the receiver would be able to play it first time inside to his supporting teammate. This tended to happen on Wolves’ right, in what may have been an attempt to take advantage of Richarlison’s inexperience on the Everton left.

Wolves began the game by pressing high when out of possession, with their front three looking to disrupt Everton’s build-up. Jimenez, Jota and Costa would press when Michael Keane or Phil Jagielka were in possession, unless they had plenty of time and space. If the centre-backs had been pressed and the ball was worked to a full-back, Wolves would drop off to a mid-block in order to prevent penetration. When Wolves were unable to close the ball or if Everton evaded the press, they would drop to a 5-3-2 mid-block.

As the game progressed, Wolves increasingly dropped into a mid-block and decided to allow Everton to bring the ball out. With the Toffees reduced to 10 men shortly before half-time, they might have considered this their best tactic to take advantage of the extra player they had on the pitch.

Everton set up in a 4-2-3-1 in possession during the first half. Idrissa Gueye and Morgan Schneiderlin occupied central midfield, operating mostly as cover for the attacking trio of Theo Walcott, Gylfi Sigurdsson and Richarlison behind centre forward Cenk Tosun.

The Toffees began by trying to create significant overloads on the left-hand side. There were two reasons for targeting this area. Firstly, Richarlison, Sigurdsson and Leighton Baines had sufficient quality to combine in tight areas and create problems, while a potential pass to Tosun was available, as well as a safety ball to Gueye or Schneiderlin. Secondly, an increasing number of Wolves players were committed to defend this area, which created space on the opposite flank, where Everton could utilise the pace of Walcott and Seamus Coleman, should they switch the play.

After the dismissal of Phil Jagielka, Everton were forced to revert to a 4-4-1. Sigurdsson made way for Mason Holgate, while Richarlison and Walcott dropped in to make a flat midfield four. Little changed in the final third for the visitors, who continued to try and attack in the same way. Their bravery was rewarded with the second goal. Naturally, as they defended their lead in the latter stages, all thoughts of attacking disappeared.

Marco Silva’s new charges began in a 4-4-2 out of possession, with Sigurdsson joining Tosun on the top line – the same structure the manager used at Watford last season. Everton would try to encourage the ball out to the outside centre-backs of Wolves’ back three, where the nearest of Sigurdsson or Tosun would press. The other forward in the front line would shut off the pass back to Conor Coady – this further encouraged the ball wide, where Everton attempted to trap the hosts.

Due to the advancing runs of Wolves’ full-backs and the high positioning of their front three, Everton were at times pulled into a back six. On a number of occasions, Richarlison and Walcott had to track all the way to their defensive line – which they struggled to do for the 90 minutes.

After the sending-off, Everton remained in a compact low block and simply tried to deny Wolves opportunities to play through. Before conceding the equaliser in the 80th minute, the central quartet of Michael Keane, Holgate, Gueye and Schneiderlin were effective in protecting the central space.

Silva perhaps showed a level of naivety in not making a second substitute until after Wolves had drawn level. Following Jagielka’s dismissal, his players had been working non-stop out of possession with an underload to deny Wolves space. There is an argument to suggest that the head coach could and should have made further changes in personnel sooner.