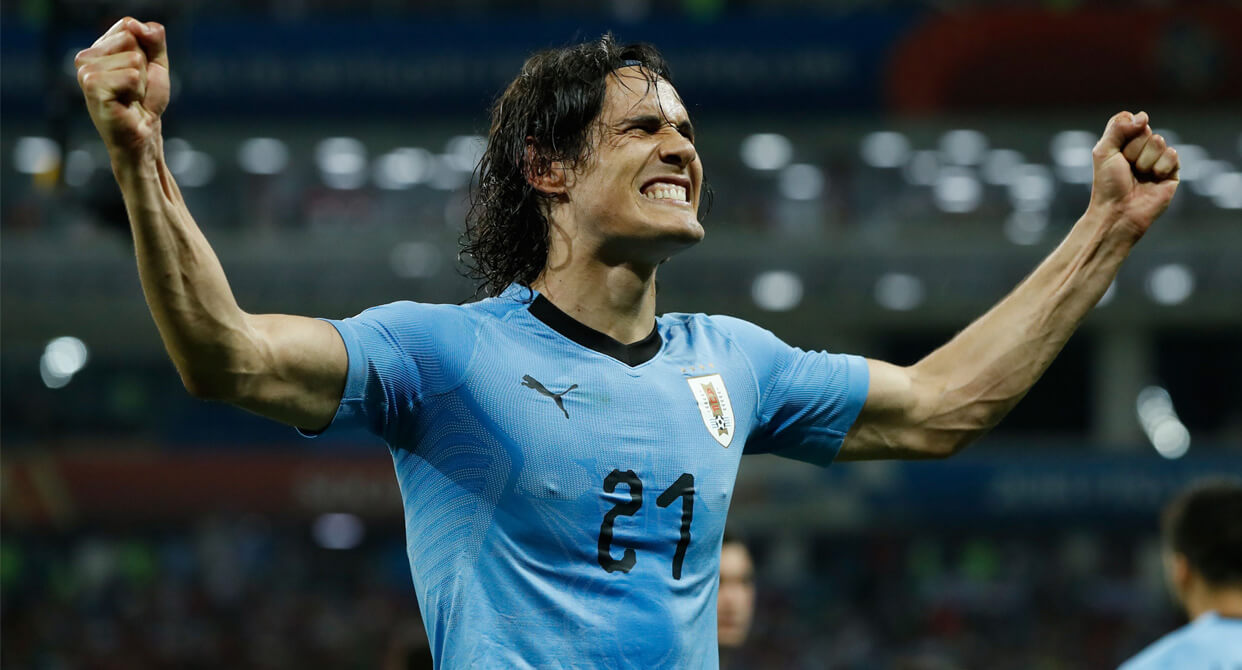 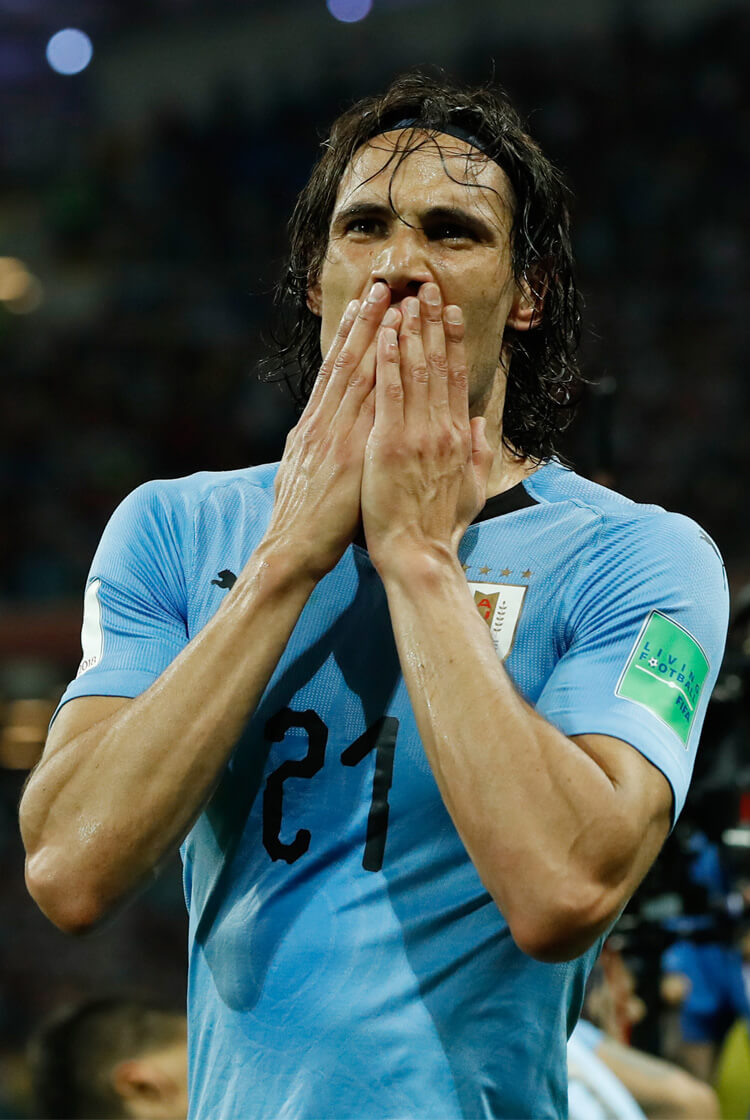 Uruguay secured a quarter-final meeting with France, as a brace from Paris Saint-Germain forward Edinson Cavani knocked Portugal out of the 2018 World Cup. It was a day that saw two of the game’s greats – Cristiano Ronaldo and Lionel Messi – go home, but neither Portugal nor Argentina, who had earlier been beaten by France, deserved to progress. Cavani met a Luis Suarez cross to open the scoring with a powerful header in the seventh minute. Veteran centre-back Pepe hit back after the break – the first goal that Oscar Tabarez’s side had conceded since November – before Cavani responded almost immediately with what turned out to be a stunning winner. Uruguay’s match-winner later limped off with a worrying hamstring injury – there will be plenty of Uruguayan fingers crossed that he’s available come the quarter final on Friday. 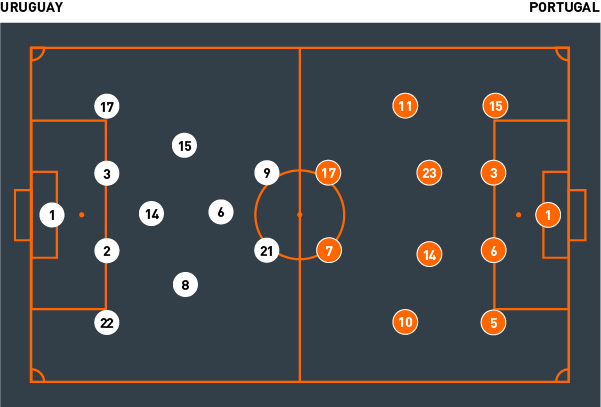 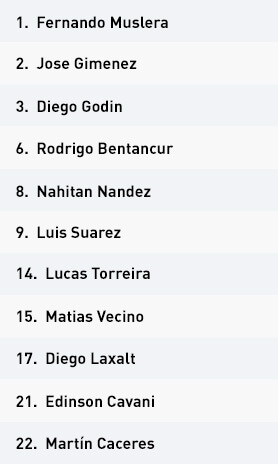 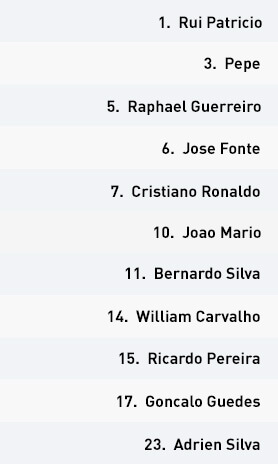 On paper, it seemed Uruguay had set up in the same 4-4-2 diamond deployed in the victory over Russia in the group stages. In reality, however, their in-possession structure was a 4-3-3, with Nahitan Nandez’s position crucial to how they structured their attacks and transitioned into defence.

Operating in this structure against Portugal’s 4-4-2 meant that Uruguay maintained their overload in the centre of the pitch, while the full-backs could push on and occupy the wingers. This meant that Raphael Guerreiro was occupied by Nandez’s positioning, leaving Edinson Cavani one-on-one with Jose Fonte.

This overloading helped to create the situation for both of Uruguay’s goals – albeit Martin Caceres’ movement was crucial in opening the scoring. The run of Caceres dragged the full-back Guerreiro out of position, which left Cavani free to pick up the ball and switch the play to Luis Suarez, before making another run into the box to complete the move.

For the second goal, Uruguay again overloaded the right side – but this time more in the half-space than out wide, through Rodrigo Bentancur and Nandez. With Lucas Torreira and Matias Vecino staying deep when Bentancur picked up the second ball, the overload forced Fonte and Ricardo Pereira to move in centrally to deal with Suarez’s run. Cavani was left unmarked on the outside to receive and finish with a superb first-time strike.

Out of possession, Uruguay adopted two positional structures. They would look to press Portugal high in a 4-3-3 structure, with Nandez joining Suarez and Cavani to prevent Portugal from building through William Carvalho. This forced their opponents to send the ball directly to Cristiano Ronaldo, where he would have to deal with Diego Godin and Jose Gimenez in an aerial duel or clip the ball to the full-backs, who would be trapped by three players: Nandez, Bentancur and Caceres on Uruguay’s right; Suarez, Vecino and Diego Laxalt on Uruguay’s left.

Uruguay also operated in a low block, which would take on the form of a 4-4-1-1, 4-5-1 or 5-4-1. This was similarly well organised and made it close to impossible for Portugal to penetrate centrally. While there was space out wide, at least two players – usually a full-back and Nandez or Vecino – would deny any time and space to deliver a quality cross, reducing the angle so that any ball into the box was predictable.

While there would be two Uruguayans preventing a cross, a third player would always be nearby so that if the wide attacker shifted it on to their inside foot, they were put under immediate pressure and the shot was more often than not blocked. Oscar Tabarez’s side were particularly effective at stopping Ronaldo from cutting inside and shooting.

Uruguay very rarely tackled in these areas. Instead, they forced Portugal to move the ball before simply looking to block. They were aware of the knock-on effect their block would face if they risked being beaten by attempting a tackle.

With only 34 per cent possession and three shots on target, Uruguay stayed loyal to a clear game plan. But away from their strategy, they were ruthless in attack and extremely well organised in possession. Tactically, they were far superior to Portugal on the night.

Portugal set up in a 4-4-2 formation in possession, with Adrien Silva joining William Carvalho in the middle, while Bernardo Silva and Joao Mario played wide. The midfield four would often take the form of three, with the wide midfielder on the far side joining Goncalo Guedes and Cristiano Ronaldo in attack, while the ballside wide midfielder would stay narrow, creating more of a central three.

In the case of the ballside midfielder coming more central, the full-back on that flank would push up to maintain the width. The back four remained the same, with the exception of Ricardo Pereira coming in for Cedric Soares at right-back.

Portugal might have had 66 per cent of the possession, but they had real difficulty in finding solutions to break down their opponents’ well-organised block. The only free spaces were out wide, and they were then closed down very quickly.

As the game progressed, they tried to get the full-backs more involved in the attacks, with William covering defensively. However, with Uruguay sitting so deep, when Portugal created an opportunity to cross, the attackers were often positioned on the same line as the defence, so couldn’t get a run on them to head the ball with any real power. Any attempt on goal was fairly feeble, as a result.

Portugal found one solution in overloading the wide areas with the full-back, wide midfielder, central midfielder and occasionally a striker in order to attract more Uruguay players out. This was successful in creating space for a blindside run from deep, beyond the back line where he could receive the ball.

But despite giving Portugal the opportunity to create a goalscoring chance, the player receiving the ball was put under immediate pressure from another Uruguay defender. His time to pick out a pass to a teammate in an already crowded penalty area was therefore limited. While this offered a solution in getting beyond the block, nothing particularly clear-cut was forthcoming.

Fernando Santos switched his team to a 4-3-3 for the last 20 minutes, with Ricardo Quaresma and Andre Silva coming on to join Ronaldo in attack, while Joao Mario and Bernardo Silva played centrally in advanced positions. This didn’t trouble Uruguay’s organised low block, however.

Out of possession, Portugal also operated in a 4-4-2 formation, but struggled to contain Uruguay when they had the ball. Given that Uruguay only had 33 per cent of the possession, Portugal didn’t spend much time in this structure – but when they did they were often pulled apart by the clever movement and positioning of players such as Nandez and Cavani.

Portugal didn’t press with any real intensity, either, and would probably have been played through with relative ease given their numerical inferiority in the centre of the park. Instead, they looked to simply deny Uruguay space – but up against a team who favoured going direct in their build-up, much of Portugal’s defending was around first and second balls.