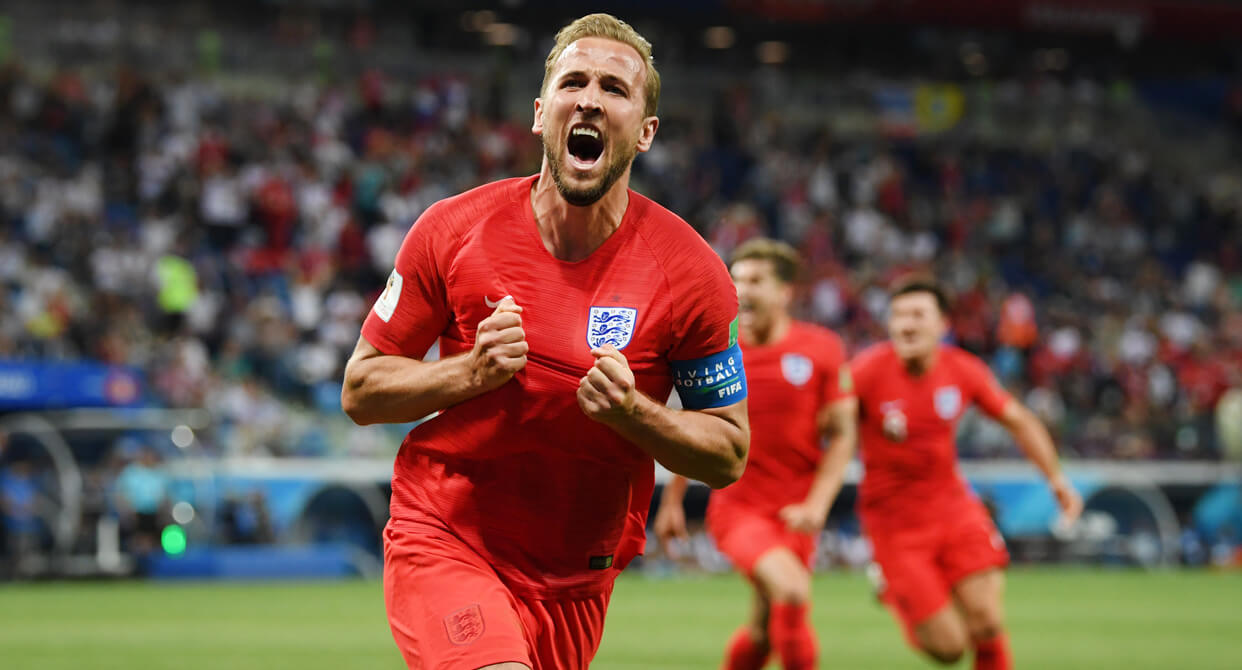 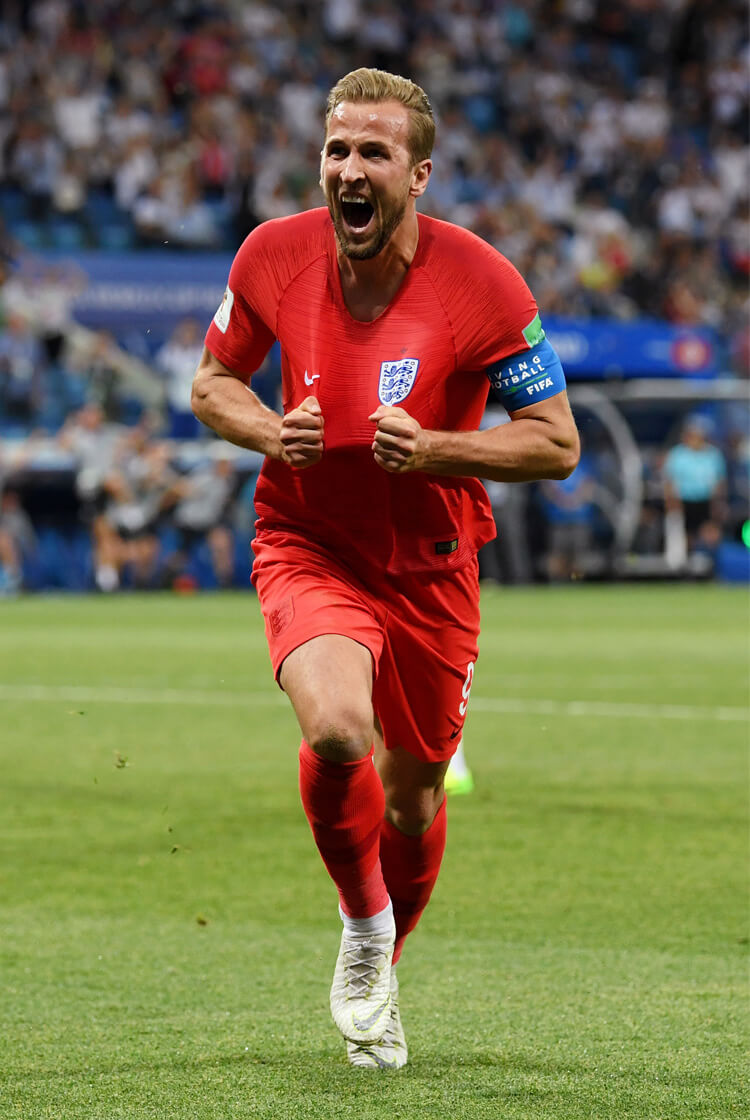 A brace from England captain Harry Kane, including a dramatic stoppage-time winner, sealed victory for England in their opening game of the 2018 World Cup against Tunisia in Volgograd. The Three Lions took the lead their excellent start deserved, when Kane knocked home a rebound after a John Stones header had been superbly saved – but Gareth Southgate’s men looked in danger of dropping two crucial points when Ferjani Sassi equalised from the penalty spot after Kyle Walker was penalised for an accidental elbow to the face of Tunisia attacker Fakhreddine Ben Youssef. But Kane struck late and decisively, heading in unmarked at the far post after Harry Maguire had won an initial header from a Kieran Trippier corner. It is the first time England have won their opening game at a major tournament since the 2006 World Cup. 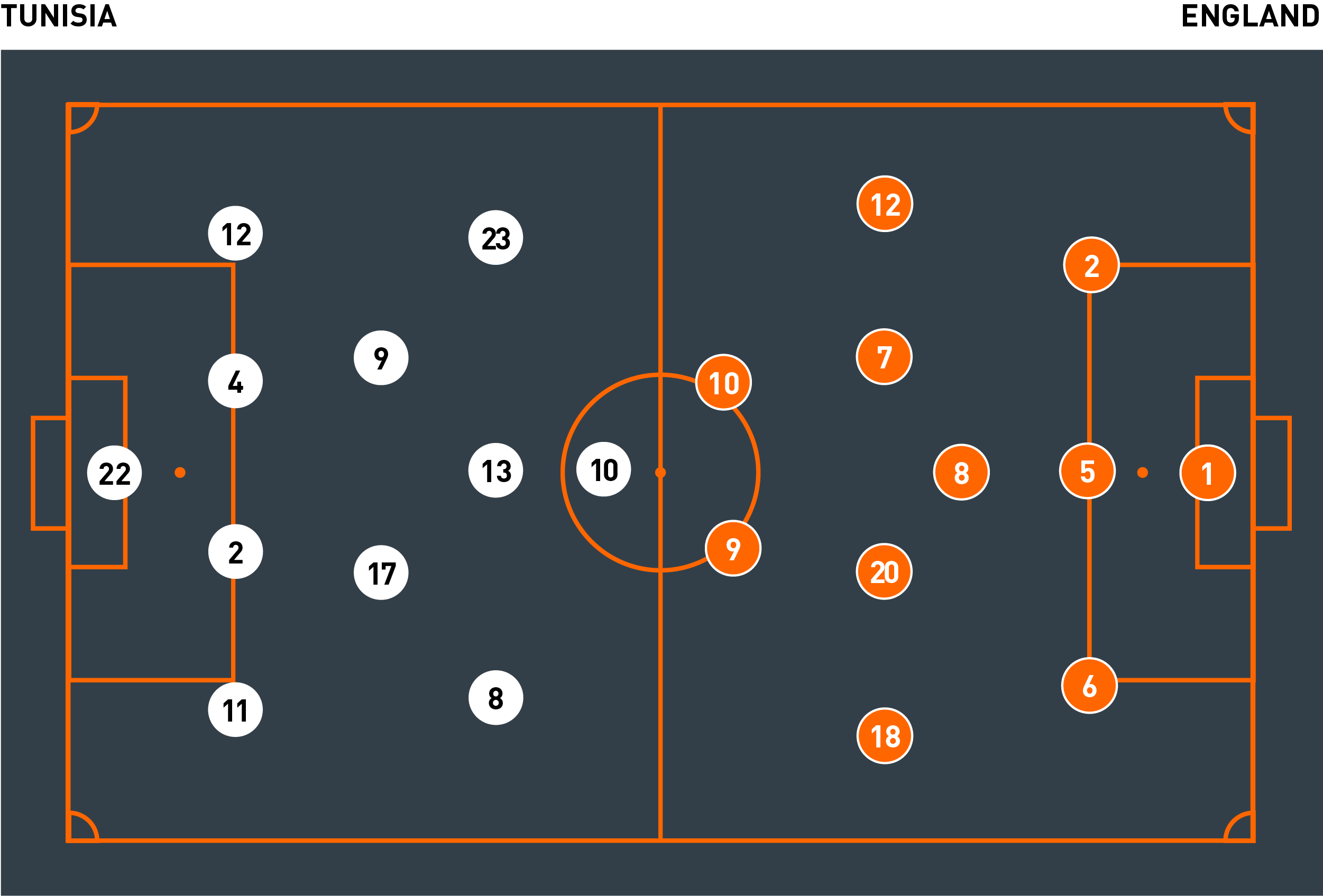 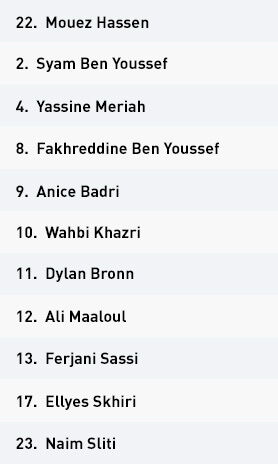 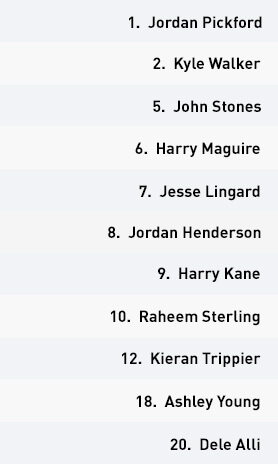 Tunisia spent the first half organised in a 4-2-3-1 formation, with Ellyes Skhiri and Anice Badri charged with the unenviable task of dealing with England’s attacking movement between and beyond their midfield lines.

In possession, they worked with a simple, ineffective game plan: get the ball forward quickly. England weren’t troubled by this, with Tunisia registering only one shot on target for the entire game – and that came from the penalty spot.

Tunisia’s centre-backs set up on the goalline just outside the box for Tunisia’s goal-kicks, but neither starting goalkeeper Mouez Hassen nor his replacement Farouk Ben Mustapha were confident in their ability to deal with England’s high press. Every ball, therefore, went long.

Tunisia inevitably struggled to create anything meaningful, as England were comfortable winning the first and second balls from the goal-kick. Striker Wahbi Khazri did make some good runs in behind the defence, but support was limited and his passes were often wayward.

Out of possession, Tunisia had a clear objective: disrupt England’s momentum. In their initial 4-2-3-1 set-up, they left space for Gareth Southgate’s team to find gaps at nearly every opportunity. England managed to get runners beyond the last line of Tunisia’s defence, before delivering passes to those runners.

In the second half, Tunisia switched to three centre-backs and two wing-backs in an attempt to match England – just as Nigeria did in the second half of the international friendly at Wembley before the World Cup kicked off. This strategy was successful in restricting England’s space, making it harder to penetrate beyond the Tunisian line.

Tunisia’s line of engagement was in their defending half – they tended not to press in England’s half unless it was from a goal-kick. Their press, however, was disorganised, erratic and easily bypassed by intelligent movement.

When Tunisia realised they couldn’t win the ball or trap England due to their opponents’ superior quality, they resorted to committing tactical fouls to stop any momentum from being gathered. They also encouraged the cross into the box, where they would defend with 10 men.

They seemingly took every precaution necessary to stop England’s runners from getting to the ball – had they displayed such discipline in defending set-pieces, Harry Kane’s stoppage-time winner from a corner might have been avoided.

England set up in a 3-5-2 formation, which in practice was a 3-3-4 in possession and occasionally even a 3-1-6 depending on how high wing-backs Kieran Trippier and Ashley Young played.

Gareth Southgate’s team demonstrated energetic and intelligent movement from the outset, particularly to get in behind their opponents. Raheem Sterling and Jesse Lingard were especially difficult to track for Tunisia. Were it not for poor technical execution of the penetrative pass or final ball/shot, England could have been comfortably ahead at half-time.

England showed a slight bias towards the right side during the build-up, where Trippier found success in getting the ball to feet or receiving in space behind the full-back. The Tottenham Hotspur man was helped by the disorganised press of Tunisia, but Kyle Walker, Jordan Henderson and Dele Alli deserve credit for regularly picking him out.

The technical execution across the pitch, however, was inconsistent. The detail of their passes was off, as the ball was too often played behind teammates or into feet when the movement suggested playing in front would have been the better option. This was the case all over the pitch – not just from one or two players.

From goal-kicks, England interestingly left an enormous gap in the centre of the pitch, leaving the three centre-backs to play from deep with Jordan Henderson linking the play. Trippier and Young played slightly ahead while Alli, Lingard, Sterling and Harry Kane all occupied the Tunisia back line.

This was difficult for Tunisia to defend against, as they wanted to press high from goal-kicks but were uncomfortable bringing their defence to the halfway line with so many potential threats in behind.

Tunisia reacted in the second half by making a tactical switch to play three at the back with two wing-backs. England initially struggled to gather momentum, as the space to play through was now noticeably limited.

It was ultimately smart movement and positioning from Harry Kane on corners that was key to England’s success. The Three Lions captain was certainly the difference, and fully deserving of praise at full-time.

Out of possession, England were excellent. Their immediate counter-press upon losing the ball was arguably the best executed in the tournament so far. Tunisia found it seriously challenging to put together an effective series of passes while this strategy was in progress.

The counter-press would last as long as Tunisia were playing short passes. When a longer pass was played – whether backwards, sideways or forwards – England would drop and fall into more of a mid-block, waiting for the next pressing trigger. The triggers included a short backwards pass, a slow, grounded sideways pass or a Tunisia player receiving with back to goal.

This was a difficult opening game for England, but they showed great resilience to keep battling until the final whistle – that will have been noted by their rivals.