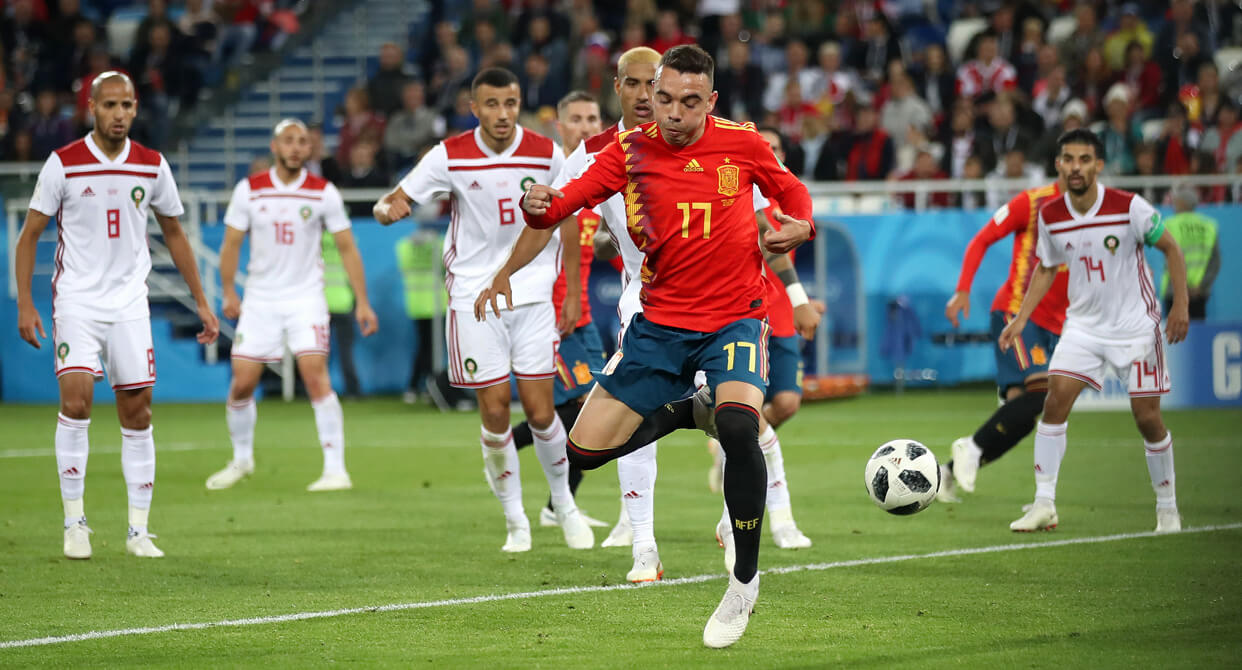 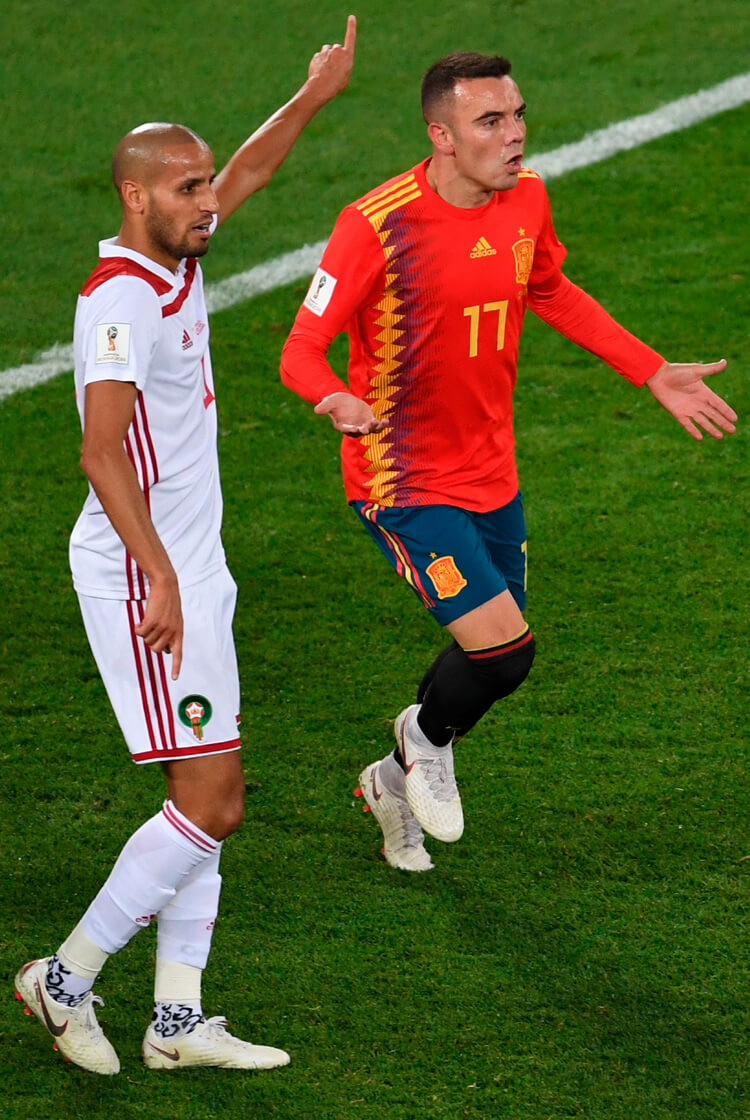 Iago Aspas’ stoppage-time equaliser got Spain out of a hole and secured a scrappy draw against Morocco, who had already been knocked out of the World Cup, in this final Group B clash. Herve Renard’s team took a shock lead when Khalid Boutaib capitalised on confusion at the back between Andres Iniesta and Sergio Ramos to run on and nutmeg David de Gea with little under a quarter of an hour played. Isco responded five minutes later, following a typically sublime passage of Spanish play, but Fernando Hierro’s men looked rattled for much of the encounter. Youssef En-Nesyri thought he had won the three points with a powerful header nine minutes from time, before VAR saved La Roja’s day by overruling the referee’s offside decision against former Liverpool striker Aspas’ flicked finish. Portugal’s 1-1 draw with Iran on the same evening meant that Spain topped the group on goals scored – and thus head for a last-16 encounter with hosts Russia. 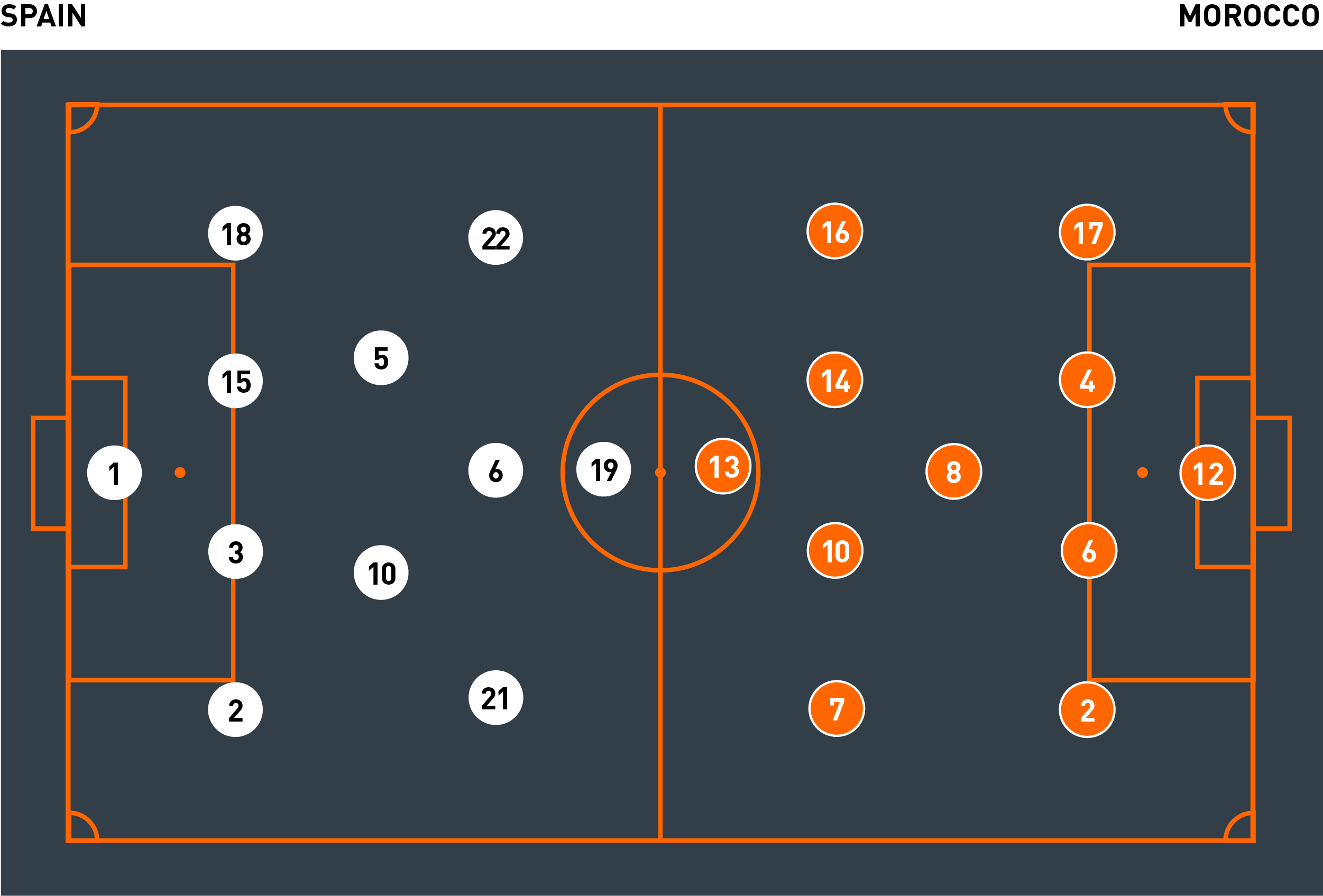 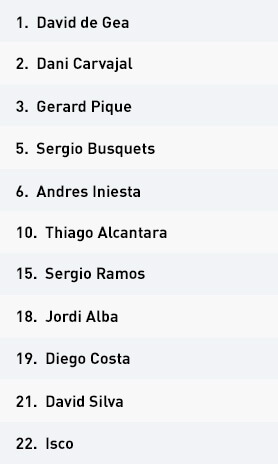 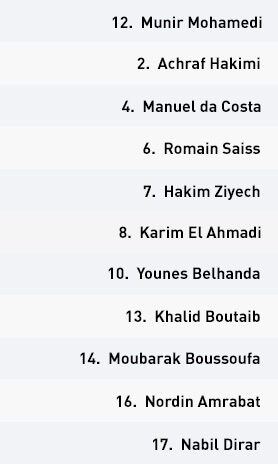 Spain set up using a 4-2-3-1 structure, with interchanging midfield roles. Thiago Alcantara was brought into the starting line-up for the first time in the tournament, as Fernando Hierro’s team looked to confirm their place in the knockout rounds.

Diego Costa’s early movements were directed towards the channels, as the fluid-moving Spanish midfield rotated into the vacant central spaces. Andres Iniesta began by dropping deeper on the left inside channel, as Jordi Alba provided attacking width on that side. Right-back Dani Carvajal reciprocated, providing attacking width and height along the right flank.

Spain prioritised both inside channels during their build. Attacking with repeated short passes, they looked to drag and pull Moroccan midfielders out of shape, but this was difficult in the opening 15 minutes. The aggression of Morocco’s tackles disrupted any early rhythm they tried to create. A wild tackle from central defender Gerard Pique temporarily added more fuel to an increasingly growing fire, as both sets of players threatened to lose control of their emotions.

La Roja were forced into life after conceding. A mix-up between Iniesta and Sergio Ramos was duly punished, but as Morocco gained more confidence in possession they expanded, leaving gaps and spaces into which Spain could penetrate on the regain. Quick combinations in the final third opened up the Moroccan back line, but Spain surprisingly lacked a killer final touch.

Soon, a flowing move along the left side eventually brought Spain back into the game. Isco combined with Costa, who then found the well-timed, third-man run of Iniesta. Isco found space inside the penalty area and latched on to Iniesta’s calm cutback, smashing home the equaliser. Spain’s build in the inside channels was proving successful, as David Silva and Isco took up positions between Morocco’s defensive lines. Sergio Busquets superbly split the Morocco midfield with well-timed disguised passes, as the Spanish midfield started to tick.

Spain did have a lack of central cover during defensive transitions, but this only lasted until half-time, as tactical changes in the second half reduced Morocco’s threat on the counter. Isco took up deeper positions throughout the second half, as Spain emphasised the forward runs of both full-backs to penetrate around the Morocco defence.

Isco, Busquets and Thiago formed a central barrier, pinning Morocco inside their defensive half, reducing their ability to counter-attack through the centre of the pitch. Any loose balls were subsequently pressed and often regained by this trio, as Spain regained control of the second ball numerous times within their opponents’ half.

Spain’s best efforts came from the short period after a regain. With Morocco looking to counter-attack and expand on their first pass forward, gaps again appeared for Busquets and Isco in particular to penetrate with incise forward passing. This period of transition looked the most effective method of attack for Spain, as even with their wonderful build-up to the edge of the Morocco penalty area, they struggled to penetrate with their final pass.

Isco’s looping header was cleared off the line, as Spain also went close with numerous efforts from Pique, Costa and Silva. Their build looked most effective when Isco dropped deep to begin the move into the final third. With his close control and ability to beat players one-on-one, Isco weaved forward, combining well with the further advanced Iniesta. But despite all their work in possession, Morocco again took the lead, as Spain failed to deal with a routine corner.

Spain continued to create chances and their hard work was eventually rewarded. Substitute Iago Aspas initially had his effort ruled out for offside, despite being the first to react after a quickly taken short corner. VAR eventually confirmed the validity of the goal, overruling the referee’s offside decision.

Already eliminated Morocco were playing for pride, as head coach Herve Renard named one change from their 1-0 defeat to Portugal. Captain Mehdi Benatia dropped to the bench, with Wolves centre-back Romain Saiss selected as his replacement.

It was clear from Morocco’s early passages of play that they would immediately look for Nordin Amrabat to drive forward with the ball after the regain. With Spain dominating the early possession, however, Morocco were more than happy to remain in a compact 4-1-4-1 defensive structure. Ensuring that Spain didn’t settle in the opening exchanges was a clear gameplan – their tackling and overall aggression to win the ball back was relentless – as the Moroccans continued to disrupt and irritate their opponents’ build.

Surprisingly, it was Morocco who took the lead after Khalid Boutaib pounced on an uncharacteristic mistake from Andres Iniesta. The striker drove through on goal and coolly slotted the ball through the legs of David de Gea. From here, Morocco gained confidence and began to expand in possession – but with the quality of Spain’s passing, Morocco were gifting space for the transition.

Morocco eventually reverted to type, as consistent fouls and an aggressive approach again disrupted the Spanish rhythm. Loose periods of Moroccan possession rarely troubled Spain for the remainder of the first half. Their back line just did enough on the defensive transition to block the Spanish efforts and key final passes, keeping the score level at the interval.

Morocco gradually retreated their defensive line, as they formed a solid low block for the majority of the second half. On the regain, they immediately looked to expand and counter-attack with direct forward passing. However, their main form of success on the transition involved dribbling and passing opponents, rather than their first-half strategy of quick forward passing.

The Spanish midfield are experts at predicting passes and regaining possession via interceptions – even with a numerical overload, they comfortably dealt with the Moroccan passing. Morocco therefore adapted and drove forward with the ball, as the Spanish midfield were much weaker when tackling opponents, especially when dragged into the wider areas.

Amrabat in particular was an effective outlet during Morocco’s transitions forwards. His direct dribbles and runs in behind helped his team drive up the pitch and relinquished pressure on the defensive units. The Watford midfielder was unlucky to see his lashing strike rattle the angle of post and crossbar and somehow bounce away from goal.

Morocco’s runs forward gradually faded, as Spanish pressure built towards the end of the match. After clearing an Isco header of the line and blocking numerous additional attempts, Morocco regained the lead. Substitute Youssef En-Nesyri bullied Sergio Ramos in the air and powered home his header from a routine corner. Morocco couldn’t hold on for the three points, however, as Aspas’ goal was eventually awarded with the help of VAR.