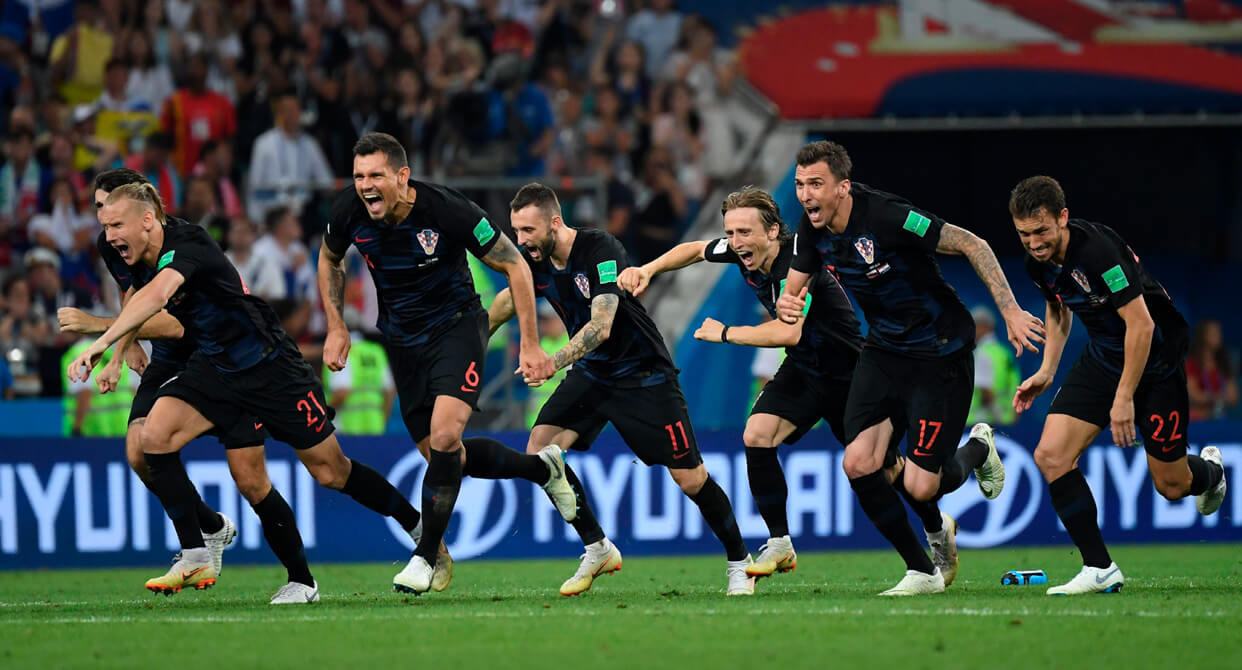 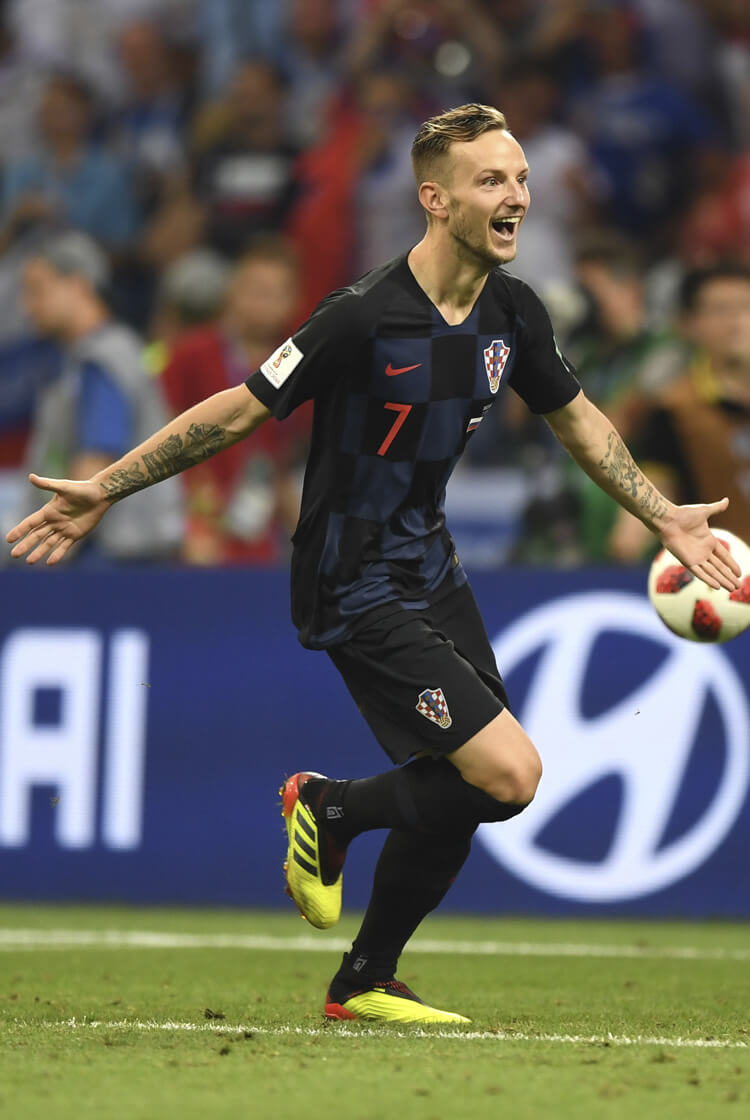 Host nation Russia’s brilliant and unexpected run at this summer’s World Cup came to a heartbreaking end in this penalty shoot-out defeat to Croatia in Sochi. Mario Fernandes had equalised Domagoj Vida’s header for Russia with five minutes of extra-time remaining, but the right-back went on to miss the decisive spot-kick before Barcelona’s Ivan Rakitic confidently converted to set up a semi-final tie with England. Stanislav Cherchesov’s team were the lowest-ranked of the 32 competing at the finals, but they exit with their heads held high. Croatia, who fought back to equalise through Andrej Kramaric in normal time after another Denis Cheryshev wonder strike had put Russia ahead, must now quickly recover from the physical and mental exertion of two knockout matches going the distance. Gareth Southgate and his increasingly inspired England side await. 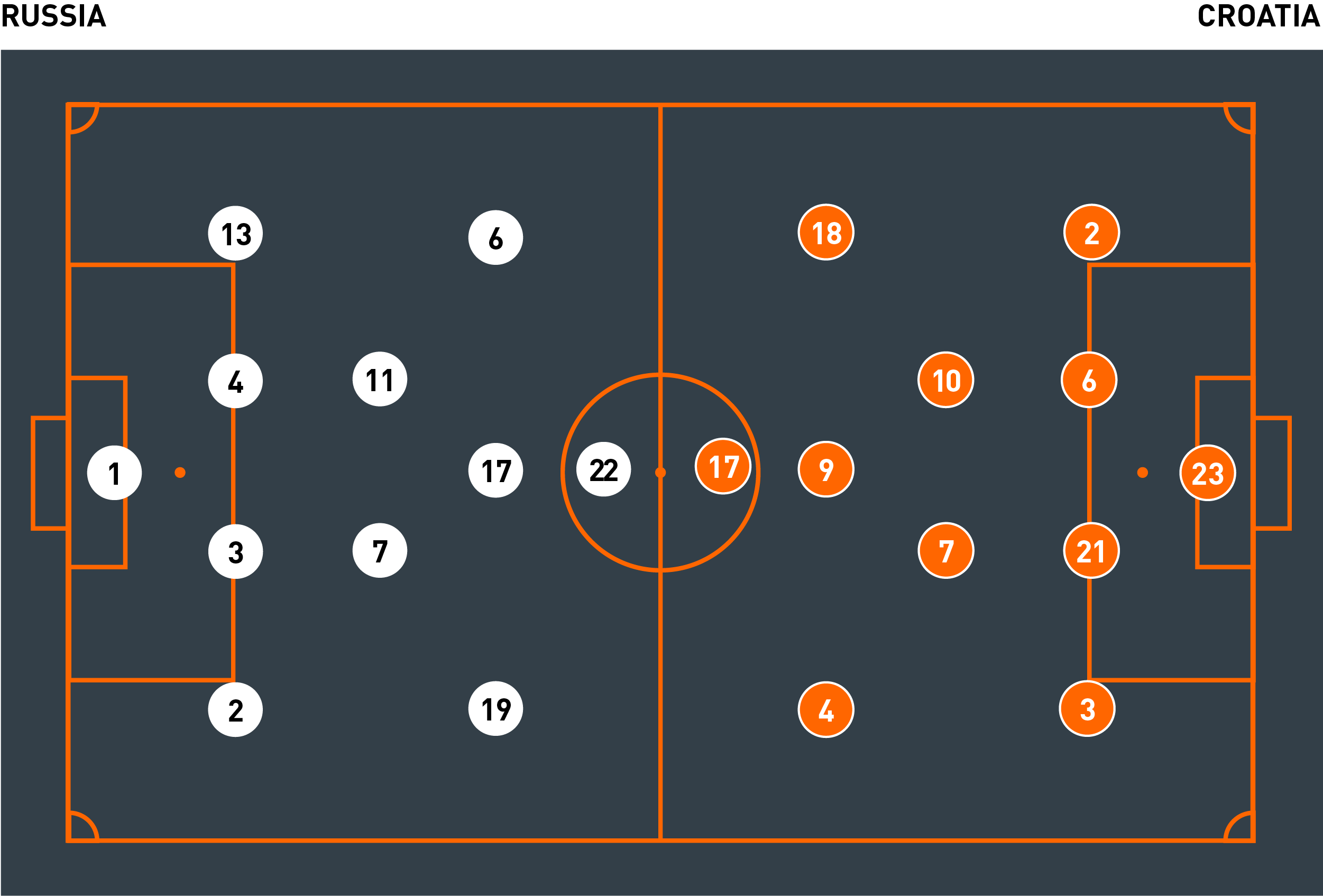 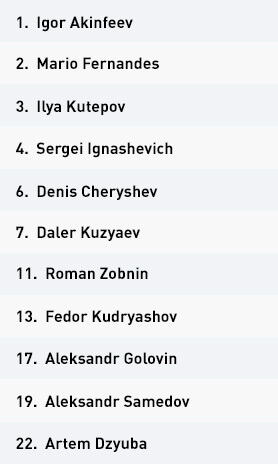 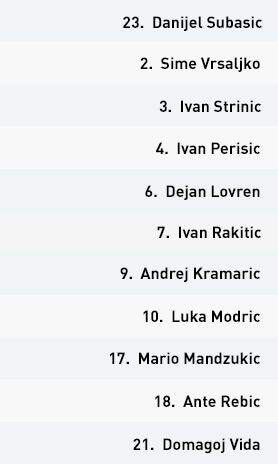 Russia changed their set-up from a 5-4-1 to a 4-2-3-1, mirroring that of the previous Croatian structures. Experienced left-back Yuri Zhirkov was withdrawn from the starting line-up, as Denis Cheryshev was brought into attack.

Once the game settled, Russia looked to attack Croatia’s back line in the channels, specifically along their right side. Dropping movements from Artem Dzyuba created gaps for through balls, as right-back Mario Fernandes made early progress deep into the Croatian half.

With Croatia looking to build from deep, Russia dropped into a compact 4-4-2, prioritising a mid-block as they lacked the capabilities to effectively high press. Their main attacking threat came from counter-attacks from deep, as they again targeted their right side. With their clearances often meaningless, they could have looked to counter more often – Dzyuba had little chance of latching on to longer balls lacking substance.

Once Dzyuba was brought into the game, however, Russia’s movements were predictable and repetitive. It felt as if they were in full defensive mode – there was minimal interchanging of positions, despite having the ball in the Croatian half. Even when the midfield maintained possession for a lengthy period, a lack of supporting movements from the player on the ball hindered any progress.

Nonetheless, despite supporting angles missing in midfield, a quick combination between Dzyuba and Denis Cheryshev ended with a superb long-range effort from the latter to put the hosts ahead. A moment of magic, coupled with grit and determination, was enough to give them the lead.

Croatia eventually regrouped and grabbed an equaliser less than 10 minutes later, through Andrej Kramaric. Russia reacted well by committing more players forward, as it was Croatia’s turn to attack solely using transitions from deep. However, neither side could grab a second goal before half-time.

Russia struggled to gain any rhythm in the early stages of the second half, as Croatia’s midfield maintained possession with crisp and accurate passing. Russia lacked connections between defence and attack, adding to Dzyuba’s isolation. But with Croatia now throwing more central midfielders forward, they had a chance to regain order and control.

Russia briefly reinvented their counter-attacking game, as they surged down the centre of the pitch, forsaking the wide areas that had brought them some first-half success. They created a few decent chances, but it wasn’t long before Croatia’s tactical changes halted their central progress.

With their central attacks showing promise but not creating clear-cut chances, head coach Stanislav Cherchesov introduced Fyodor Smolov. Sensing Croatia were once again becoming dominant, they converted into a deep defensive block as the game drifted towards extra-time.

Despite going behind after conceding from a corner in extra-time, Russia’s pressure eventually resulted in an equaliser. Right-back Fernandes found space in a crowded penalty area to power home his header from Alan Dzagoev’s free-kick.

The match concluded with a penalty shoot-out, with the hosts stepping up first. Smolov’s ill-timed panenka was weak and easily saved, while Fernandes also missed, dragging his effort wide. Despite Igor Akinfeev saving one of the Croatian penalties, it wasn’t enough. The hosts were eliminated 4-3 on penalties.

Head coach Zlatko Dalic made one change for Croatia, withdrawing defensive midfielder Marcelo Brozovic and replacing him with the more attacking Andrej Kramaric. Croatia’s structure was therefore altered from a 4-1-4-1 to a 4-2-3-1, with Kramaric taking up the central number 10 role.

Croatia prioritised a short build from goalkeeper Danijel Subasic. Ivan Rakitic and Luka Modric would drop very short from midfield during the build, which ensured safety and control in the opening exchanges. The movements from the midfield pairing also allowed both full-backs to move into the next line. Only right-back Sime Vrsaljko took advantage of this, however, as his attacking movements weren’t reciprocated by Ivan Strinic on the left.

A downside of this tactic was a lack of quality incision into the final third. The Croatian entries were limited, as Rakitic and Modric couldn’t cover the ground quick enough from their deeper positions. This slightly stifled their attacking intent, as Russia’s defensive block remained compact.

Their best attacking outlet throughout the first half was the marauding runs of Vrsaljko from right-back. As right midfielder Ante Rebic moved infield, the space was created for Vrsaljko to drive forward. Rebic’s movement also ensured Croatia had a second player in between Russia’s midfield and defensive lines, as converted number 10 Kramaric initially lacked central support from deep-lying playmakers Modric and Rakitic.

Despite their dominance of the ball, Croatia went behind through a superb strike from Cheryshev. Conceding clearly damaged their confidence in possession, but they quickly hit back, with Kramaric equalising less than 10 minutes later. Russia’s defence had left far too much space for the Croatian front line, as a routine long goal-kick was flicked on for Mario Mandzukic. The Juventus striker found the onrushing Kramaric from a tight angle, who levelled proceedings.

Their tempo increased just before the interval and this continued after the break. Both full-backs began to push forward, as Croatia had full momentum and complete control of possession. With their crosses now frequent and testing, a delivery from the left side eventually fell to Ivan Perisic, whose swivelling effort rebounded agonisingly off the inside of the post – a huge let-off for the hosts.

As Russia had more central space to counter-attack from Croatia’s more expansive set-up, winger Perisic was replaced by defensive midfielder Marcelo Brozovic. Despite this looking like a defensive change, the result was the opposite. Brozovic’s central presence added an additional Croatian body within the central lane – this nullified Russian counter-attacks and stopped them from breaking out of their own half for extended periods. Along with this, one of Modric or Rakitic could now move ahead of the ball and link defence with attack.

Despite their best efforts, Croatia’s energy and dynamism soon faded and the game headed into extra-time. Neither side created that many chances in a tense 30-minute spell, as fatigue began to set in. Croatia did take the lead when central defender Domagoj Vida powered home his header from a corner-kick, but a late equaliser from Russia extinguished their joy and sent the tie to a second consecutive penalty shoot-out for both teams.

Only substitute Mateo Kovacic missed from Croatia’s five penalties, as Rakitic’s successful spot-kick sent Croatia through to the semi finals, where they will battle against England for a place in the World Cup final.