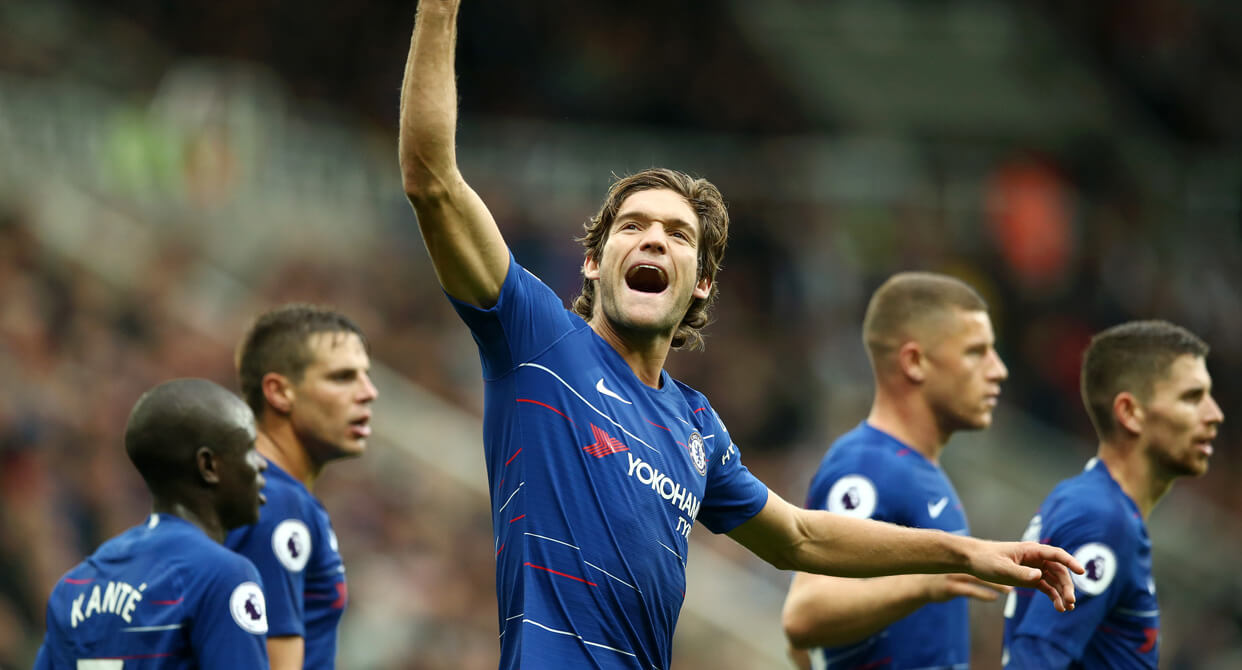 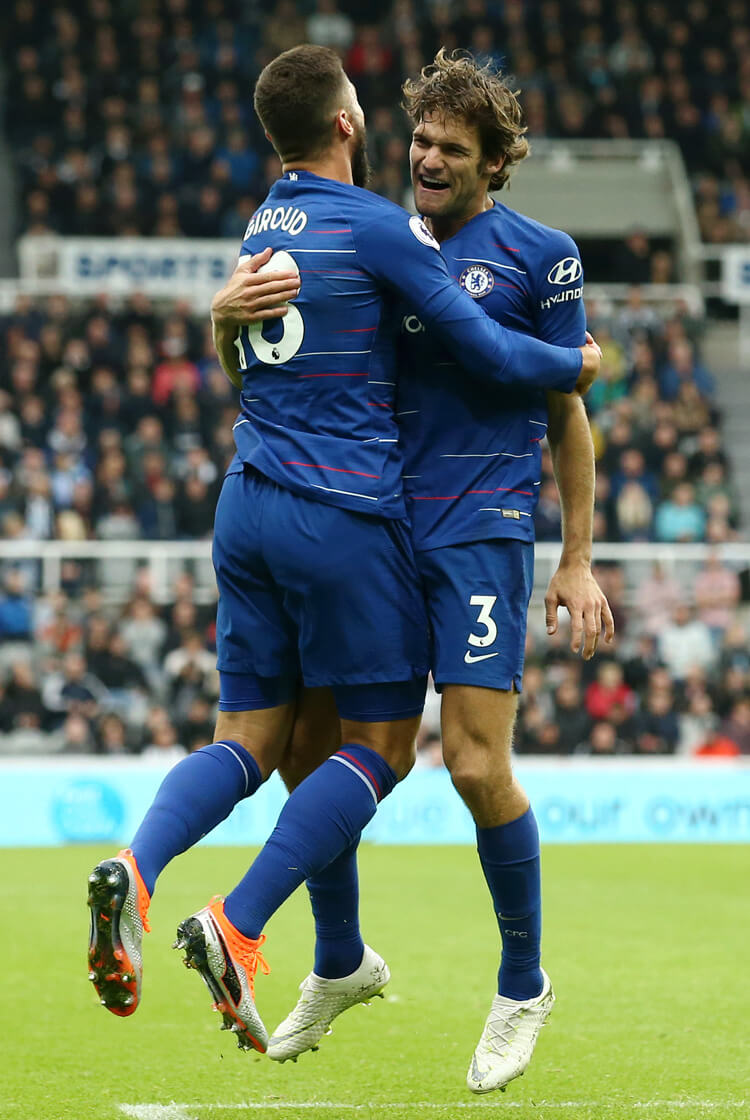 Chelsea’s flying start to the season under new head coach Maurizio Sarri continues, as victory over Newcastle at St James’ Park eventually left the Blues third behind only Liverpool and Tottenham in the Premier League table. Rafael Benitez took an ultra-defensive approach to the game, setting his team up with an extra defender to their previous two fixtures – and they kept their opponents at a safe distance until deep into the second half. A foul on Marcos Alonso in the box gifted Eden Hazard the opportunity to open his account for the campaign from the spot on his first start, and the Belgium international confidently dispatched his penalty. The visitors’ lead lasted only six minutes, before substitute Joselu beat David Luiz at the near post to head in a superb equaliser. But Chelsea were never going to settle for a point, and with three minutes of the 90 remaining, DeAndre Yedlin deflected Alonso’s shot into the back of the net after the hosts’ defence had failed to clear its lines. 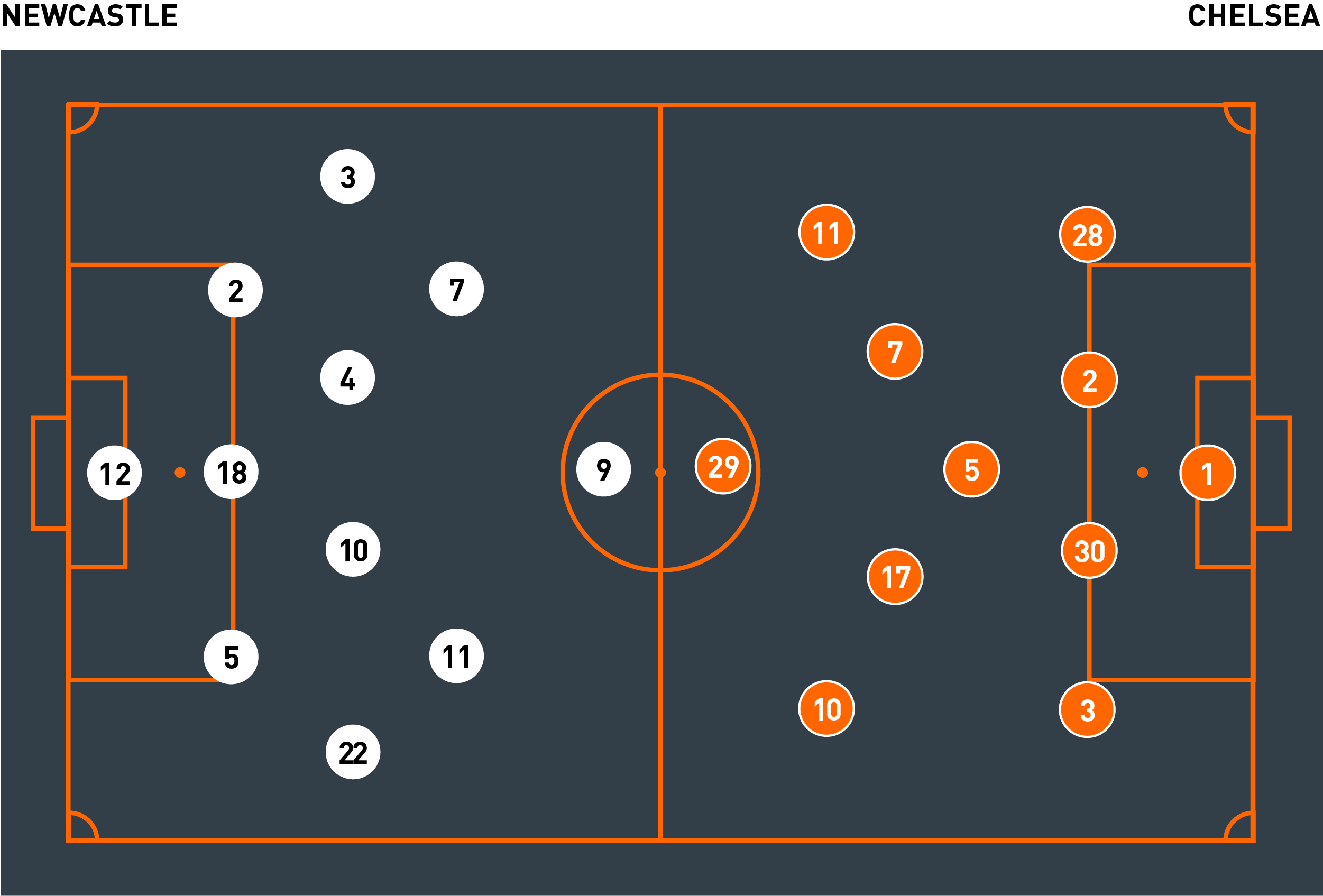 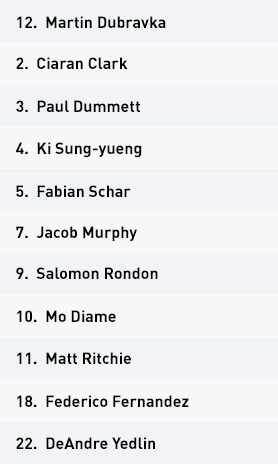 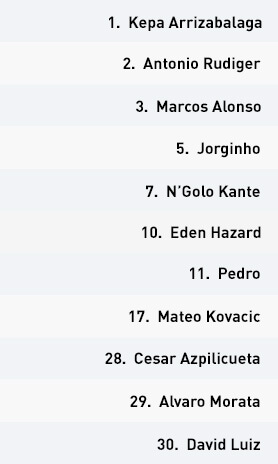 Head coach Rafa Benitez rung the changes at St James’ Park, introducing six fresh faces to his starting line-up. The Spaniard moved away from the 4-4-2 shape seen in Newcastle’s opening two games, utilising a much more defensive 5-4-1 structure. Salomon Rondon, Federico Fernandez and Ki Sung-yueng all made their first starts, with captain Jamaal Lascelles and Jonjo Shelvey absent from the squad.

The Magpies simply contained Chelsea throughout the first half, offering very little in attack themselves. By adding an extra defender, they ensured penetration into the final third would be difficult and frustrating for their opponents. Jacob Murphy was their most effective runner from midfield, both with and without the ball. The young midfielder played on the left side of a tight midfield four, and often had time and space to attack right-back Cesar Azpilicueta, with Pedro too far ahead of his teammate to consistently recover back.

N’Golo Kante, however, soon used his speed and intelligence to take advantage of Murphy’s attacking runs during transitional moments. In light of this, it might have been more productive to swap Murphy with Matt Ritchie on Newcastle’s right. With Chelsea’s rotations far more complex on their left side, Murphy could have profited by receiving and attacking opponents not in their primary defensive positions. Ritchie could have also provided first-time crosses on his favoured left foot, rather than being forced to repeatedly cut back inside from the right channel. Rondon, meanwhile, could have attached himself on to David Luiz, over whom he would have had aerial superiority in attacking any crosses.

Newcastle’s only real spell of attacking pressure in the first half came from a flurry of consecutive corners, in which the variety of their delivery seemingly confused the Chelsea defence. Ultimately, though, they didn’t really look like scoring or conceding, as their ultra-defensive approach kept the Blues at distance.

The home side again began on the back foot, as Chelsea started the second half with an increased tempo in possession. Newcastle did eventually show more glimpses of controlled possession in the second period, especially as they had started to utilise the width offered by both wing-backs. They resorted to a more patient build-up, with their primary strategy being to switch the ball over their opponents’ wingers to create one-on-one moments against the full-backs. With the speed of DeAndre Yedlin on their right, Newcastle found the space to send crosses into the visitors’ penalty area for the first time in open play.

The hosts’ major issue was an inability to win loose balls after sustained periods of defending. The midfield unit were far less aggressive than their Chelsea counterparts, and rarely won a loose ball after a clearance – meaning they could never really break out and relieve the pressure on their defence. As a result, they inevitably faced long periods in their own half.

After conceding a penalty and going behind, Newcastle reacted with a dramatic and obvious increase in aggression within the tackle. This had been markedly absent from their performance to that point, and their greater intensity was rewarded – Yedlin beat Olivier Giroud to a loose ball on the right-hand side before firing in a cross towards the near post. Substitute Joselu beat David Luiz to the incoming ball, nodding home an equaliser.

Despite this, Chelsea set out to regain their lead and the hosts were once again penetrated. They failed to clear their lines, and full-back Yedlin was unfortunate to deflect Marcos Alonso’s strike into his own net. Benitez’s men reacted positively, but with time against them they were unable to steal anything from the game late on.

Eden Hazard and Mateo Kovacic made their first Premier League starts of the season, as Maurizio Sarri moved Willian and Ross Barkley to the substitutes’ bench. It was clear from the opening minutes of the game that Chelsea would look to prioritise their left side in attack. Marcos Alonso provided the attacking width, enabling Hazard to move inside and receive behind Newcastle’s compact midfield unit.

But with the Magpies deploying a back five, Hazard was forced to increase the distance and frequency of his movements away from the ball. Chelsea had success in finding the Belgium international during switches of play, usually orchestrated by Kovacic and Jorginho. As Newcastle’s midfield unit slid with the ball, Hazard remained motionless, which created the angle for reverse passes into his feet. When he was found by his teammates between Newcastle’s lines, Chelsea were effective in penetrating within the final third.

The visitors were able to maintain long periods of pressure through the reserved positioning of the midfield. N’Golo Kante, Jorginho and Kovacic formed a protective barrier to pounce on any loose balls and block access off into their opponents’ lone striker Salomon Rondon. David Luiz was usually the deeper of the two Chelsea centre-backs – frequently sweeping up any long balls over the top – while the less agile but physically stronger Antonio Rudiger ensured Rondon was seldom available to link up play on the transition.

Despite dominating possession, Chelsea struggled to break down the Newcastle defence, with their compactness in central areas proving problematic. The fluid role of Pedro was, nonetheless, troublesome for left-back Paul Dummett. The Spaniard began as a right winger in the 4-3-3 structure, but often made diagonal runs towards the centre, aiming to receive clipped passes in the spaces behind the defence. But with the hosts dropping deeper and deeper, these runs became ineffective, and Pedro soon took up spaces in front of the defence.

The Spaniard’s positioning had subsequently started to clog the central spaces, meaning Hazard’s impact on the ball in these areas was drastically reduced by the overcrowding between Newcastle’s lines. Pedro rarely occupied the right wing role in the first half, and Hazard soon dropped in front of the midfield unit – and his absence between the lines was noticeable. This did temporarily create one-two opportunities for Hazard to receive and then explode behind Newcastle’s midfield – penetrating with a pass, rather than a dribble – but he was eventually swarmed under aggressive pressure.

Chelsea looked much more fluid in possession as the second half got under way. Pedro stayed out wide, as a more orthodox right winger, and Hazard predictably profited. A quick flowing move saw Hazard receive and drive across into the central lane, before superbly finding Pedro on the right side of the penalty area. A deft cutback for Cesar Azpilicueta to strike a low effort on goal suggested the Blues had finally found their rhythm.

Attacking width provided by Pedro continued to make spaces in which Hazard could dictate within the final third. Additional space within the central lane for Jorginho enabled total control of the build-up, so much so that the Italian almost broke the Premier League record for the most successful passes in a single game – nine short of Ilkay Gundogan’s record of 158 passes played against Chelsea for Manchester City last season.

It wasn’t long before Pedro’s inside movements returned, and Hazard then dropped out of the spaces between the lines. Chelsea now utilised the free space vacated by Pedro, as Azpilicueta gradually moved higher to support the attack. First-time crosses brought Alvaro Morata into the game, but just as the striker was becoming more involved Sarri opted to replace him with Olivier Giroud.

Centre-back Rudiger rattled the bar from distance as the Blues grew impatient. They eventually had their breakthrough as Marcos Alonso’s charging run into the penalty area was illegally halted by Fabian Schar, and Hazard confidently converted from the spot. Despite conceding the equaliser six minutes later, Chelsea hit back. Alonso’s shot was deflected in by the trailing leg of DeAndre Yedlin, giving the away side another three points and a second consecutive away win of the season.