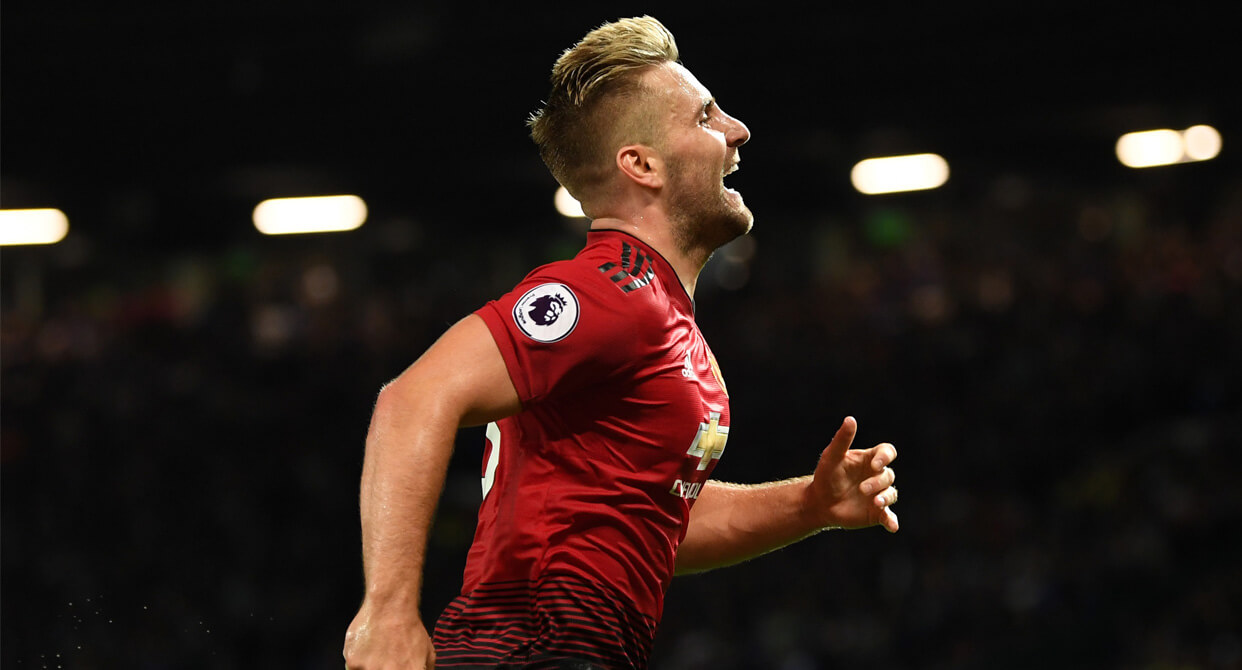 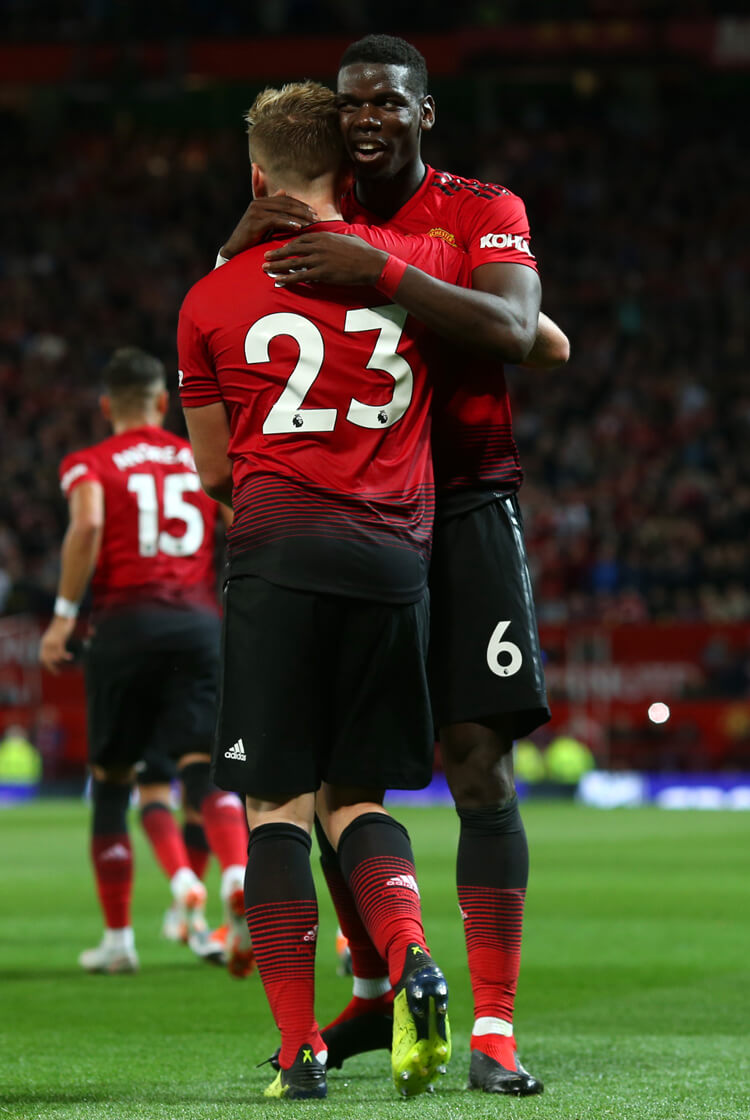 Paul Pogba was handed the captain’s armband for Manchester United’s opening game of the 2018/19 Premier League season against Leicester City at Old Trafford – and the Frenchman led by example, scoring from the penalty spot in the third minute to set the Red Devils on their way to victory. The World Cup winner had only returned to training in the week leading up to the match, but showed few signs of fatigue and calmly dispatched his spot-kick past Kasper Schmeichel after a careless handball from Daniel Amartey gifted United an early opportunity. Jose Mourinho’s side rarely impressed after that, however; Leicester dominated possession and summer signing James Maddison, a £20m recruit from Norwich City, enjoyed a bright debut. The hosts stood firm, though, and as full-time approached left-back Luke Shaw secured the three points with his first senior career goal. Substitute Jamie Vardy’s injury-time finish proved only a consolation. 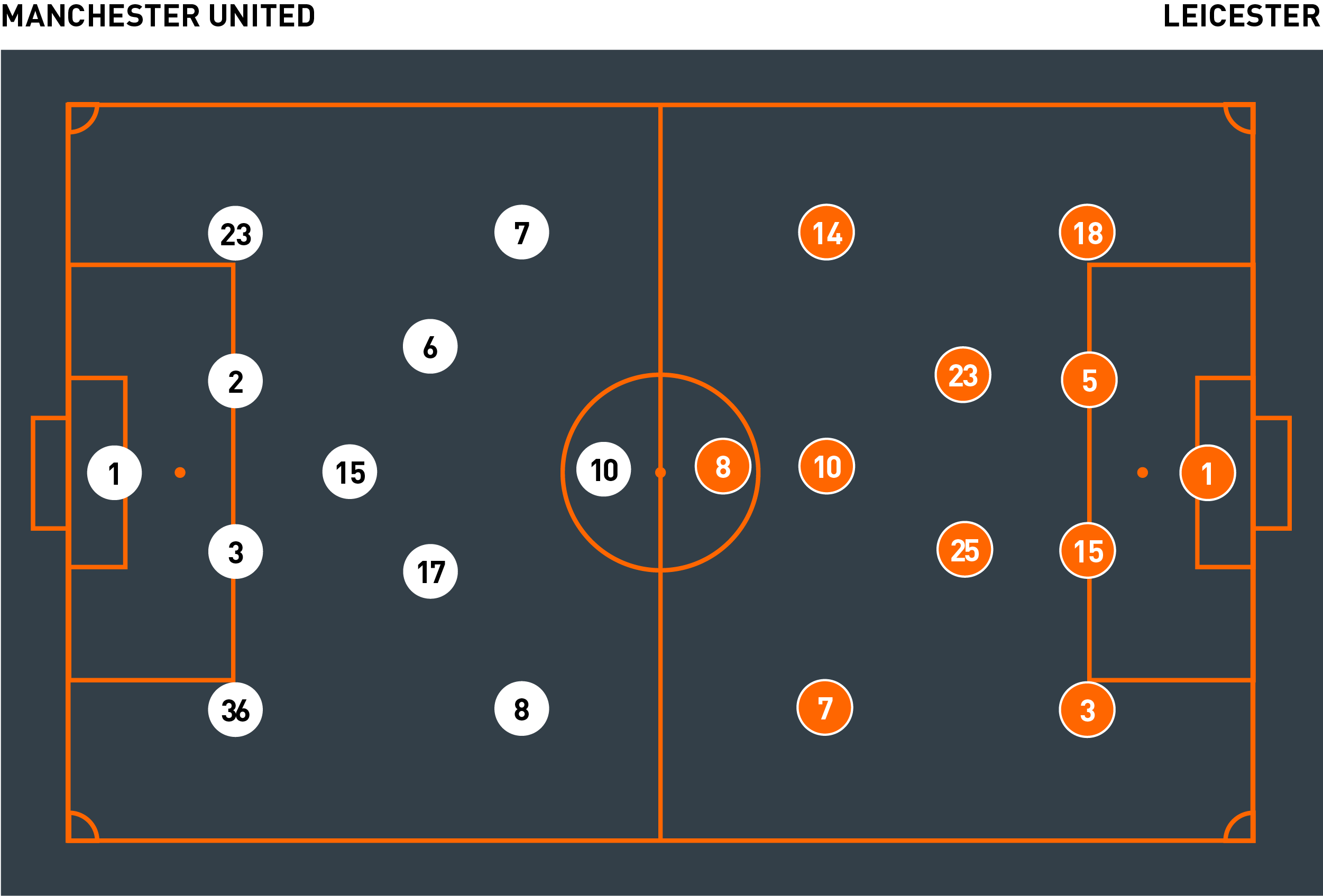 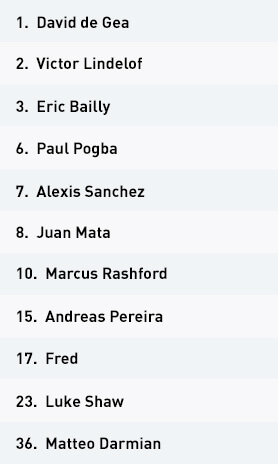 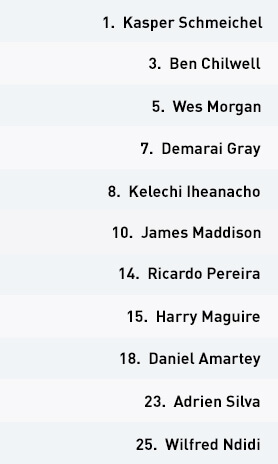 Manchester United set up in a 4-3-3, with a narrow front line. Andreas Pereira played at the base of the midfield triangle, with Paul Pogba and Fred ahead of him. Alexis Sanchez and Juan Mata operated largely within the half-spaces, playing relatively close to Marcus Rashford, which also allowed them to help Pogba and Fred in central areas. The width was provided by full-backs Luke Shaw and Matteo Darmian.

After United scored in the third minute, through a Pogba penalty, they opted to drop deeper rather than push for a second goal. When they did attack, there were a couple of clear ideas on show. One involved overloading the central areas, with Pogba, Fred, Sanchez and Mata forcing Leicester to become very compact and leave the wide areas free. This created a clear out ball to the advancing runs of Shaw or Darmian, who could receive the ball in space.

United also displayed a threat on the counter, particularly when Pogba showcased his ability to play dangerous penetrative passes. Sanchez and Rashford, however, failed to make the most of these opportunities. Transition was a clear area of interest for United, but on the evening a combination of poor technical quality on either delivery or finish plagued them.

Their effective use of the wider space will have given manager Jose Mourinho food for thought, however. Left-back Shaw was given a rare start, and his well-timed run in behind the compact Leicester defence seven minutes from time resulted in the first senior goal of his career. Substitute Rachid Ghezzal was caught ball-watching and with his body shape facing away from his man, as Shaw controlled Juan Mata’s pass before firing home from a tight angle.

United mainly operated in a mid-block out of possession, likely as a result of the early goal. Rashford normally took up the position of the front man, with Sanchez and Mata joining Pogba and Fred in the second line – but when Rashford took up a deeper position during the point of transition, either Sanchez or Mata would take up the centre-forward spot.

Pereira’s role in the mid-block was dependent on the threat posed by Leicester. When Kelechi Iheanacho or Demarai Gray pulled Victor Lindelof or Eric Bailly away from their central spots, Pereira would drop in to provide cover. If this threat was lessened, he would join Pogba and Fred in the centre of the second line of the block, creating a 4-5-1.

United would at times engage in a press higher up the pitch, usually after a short backwards pass forced Leicester to rush a longer pass. Pogba and Fred would also press Adrien Silva and Wilfred Ndidi whenever they received the ball facing their own goal, thus preventing the pair from turning and picking out a more dangerous pass.

United tried to nullify the threat of Jamie Vardy, who was introduced shortly after the hour mark, by operating in a deeper block in the latter stages of the game. This was successful for the most part, although weaknesses were exposed when the ball in behind was played from higher up the pitch – as seen for Vardy’s good chance on the volley and later his eventual goal.

Leicester operated in a 4-2-3-1 formation. Wilfred Ndidi and Adrien Silva played in the deeper central roles, with James Maddison in the number 10 position, while Demarai Gray and Ricardo Pereira supported Kelechi Iheanacho from wider areas. The front four were very fluid, playing close together and often interchanging positions, which encouraged Ben Chilwell and Daniel Amartey to advance from their full-back positions.

Leicester looked to build in possession where possible, placing trust in the technical qualities of Maddison and Gray to break down United. Their desire to create with the ball at their feet offered suggestions that the Foxes are looking to move away from the more direct, counter-attacking approach of recent years.

United’s right side was targeted, with Gray often running at Matteo Darmian and trying to beat him in one-on-one situations. This forced another United defender to come across and potentially create space in the more dangerous, central areas. Maddison regularly came deep to try to receive the ball from Ndidi and Silva, or even central defenders Wes Morgan and Harry Maguire. The former Norwich attacker’s creative quality caused Jose Mourinho’s players several problems.

The fluidity of Leicester going forward, however, left them vulnerable on the counter, particularly if Chillwell and/or Amartey had joined the attack, as well as one of Silva or Ndidi. Fortunately for the Foxes, United failed to take advantage of any openings on the break. The introduction of Jamie Vardy and Rachid Ghezzal later provided Leicester with alternative attacking options, and they managed to create more clear-cut openings on goal.

Leicester operated in a 4-4-2 out of possession and would try to press United high. Conceding in the third minute forced this tactic, as they were chasing the game early on, but they were also keen to encourage United to play long, direct passes towards Marcus Rashford, who would struggle to win the aerial battle against Morgan and Maguire. This press was led by Iheanacho and Maddison, while Gray and Pereira would then drop in to form a central line of four with Ndidi and Silva. The second line would not be positioned too far from the first line, should the latter be breached.

Leicester’s issues out of possession came from playing too close together horizontally and leaving wide spaces for Luke Shaw and Matteo Darmian to exploit. The use of a 4-4-2 can have this effect, particularly when the opposition overload the central areas and have their attackers dropping off the top line to join in.