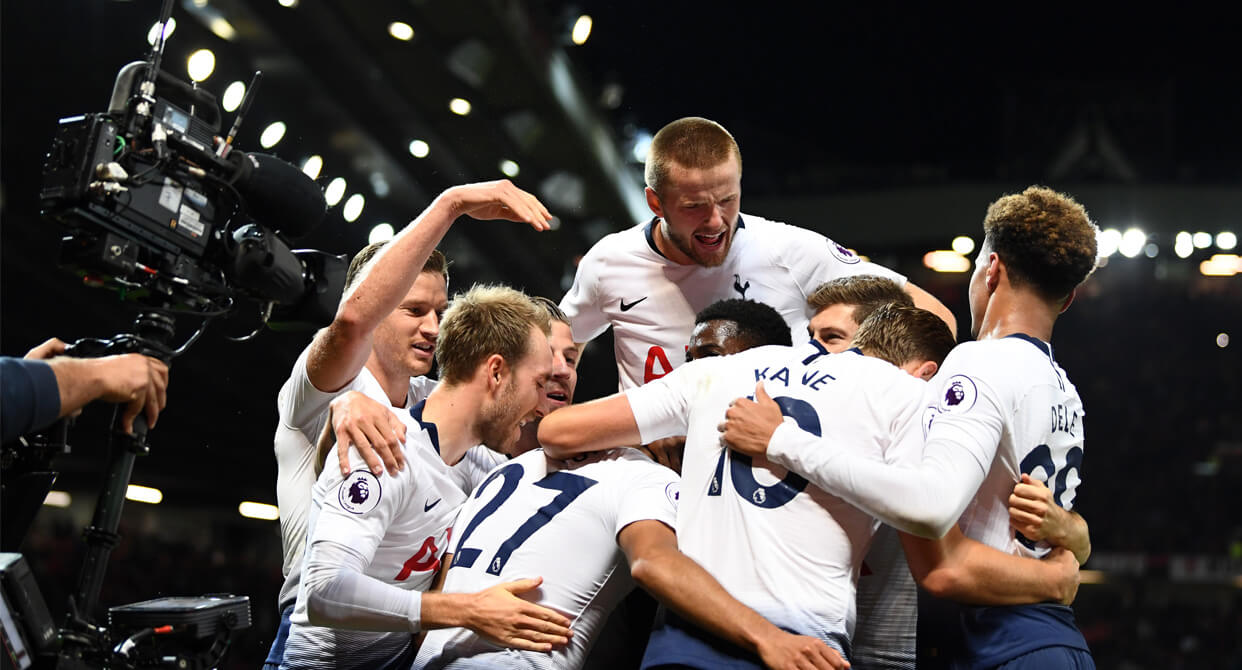 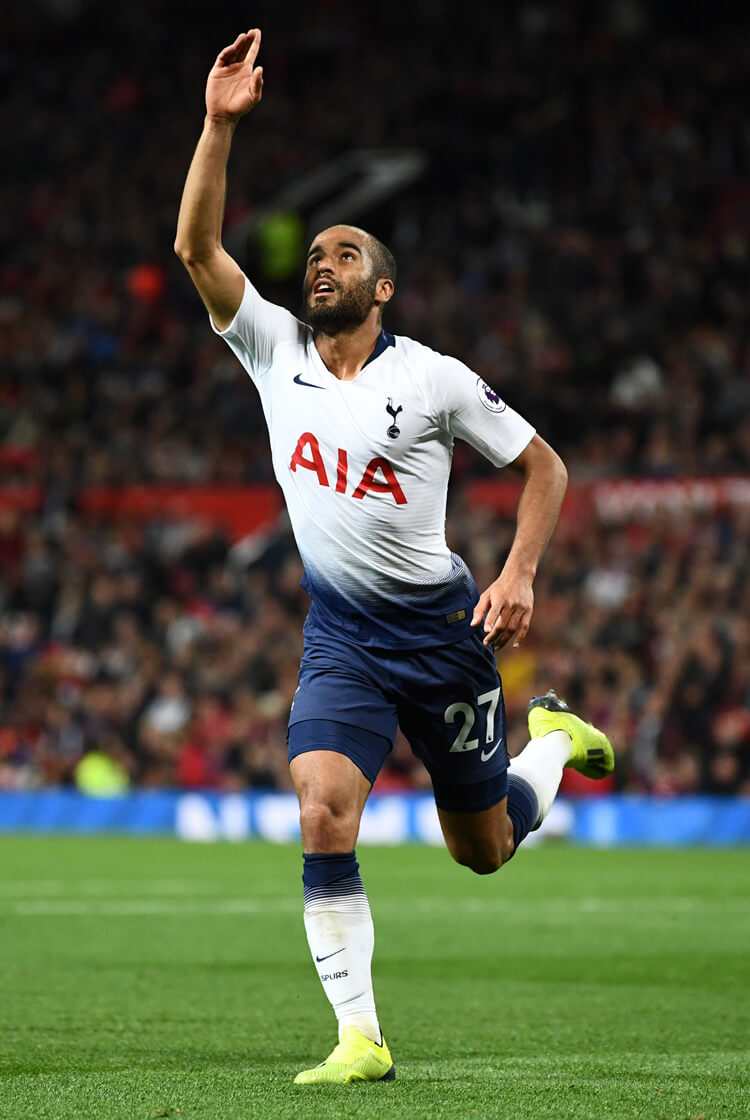 Manchester United suffered a second Premier League defeat of the season, as Tottenham heaped further pressure on Jose Mourinho by silencing the home crowd with a resounding victory at Old Trafford. Having been beaten away to Brighton in their previous game, United needed to bounce back quickly – and they kicked off with great intensity in a new-look system. But Romelu Lukaku’s squandering of an excellent chance to open the scoring after rounding goalkeeper Hugo Lloris in the first half was to be their best clear-cut opening on goal. Tottenham waited for their opportunity, and two goals in two minutes soon after the restart – from Harry Kane and Lucas Moura – put the visitors in control. Mauricio Pochettino’s players had increased the tempo in the second half, and their opponents had no response. Moura went on to wrap up the victory – and confirm United’s worst start to a league season since 1992/93 – with another superb finish in the final 10 minutes. 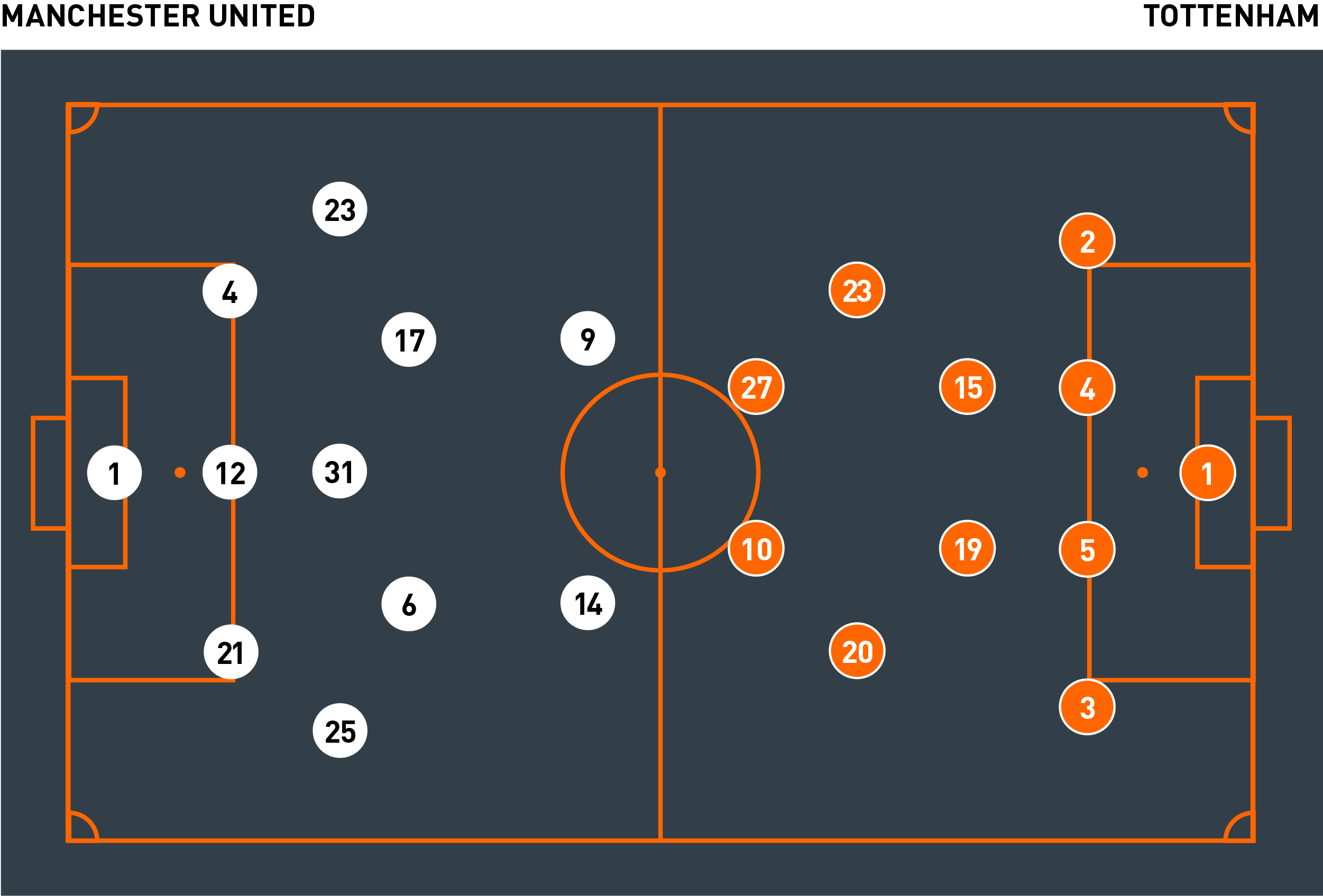 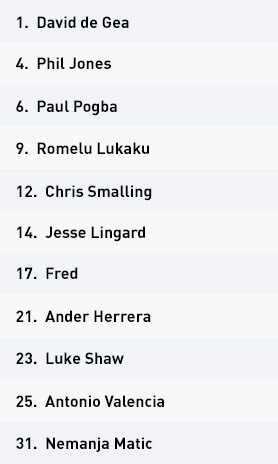 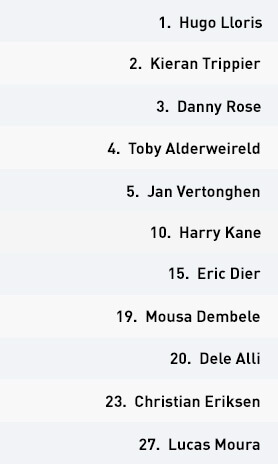 Manchester United set up in a 3-5-2 formation, with Ander Herrera (surprisingly), Phil Jones and Chris Smalling as the three centre-backs – once again suggesting their need for defensive reinforcements. Nemanja Matic played as a holding midfielder, with Paul Pogba ahead of him and Fred ahead of both. Antonio Valencia and Luke Shaw provided the width, while Jesse Lingard joined Romelu Lukaku on the top line.

United set out with the clear intention of exploiting the space in behind Tottenham’s full-backs. Danny Rose was particularly targeted – the England international would be sucked out of his defensive line to press Valencia, allowing Lukaku and/or Lingard to make diagonal runs into the space behind, which would in turn pull Toby Alderweireld out from his central space. United looked to take advantage of this on several occasions in the first half.

Tottenham’s press, both aggressive and man for man in terms of numbers, made it difficult for United to build from the back as they wanted, however. Goalkeeper David de Gea was frequently forced to send the ball directly to the forwards or to Valencia, who himself would be under immediate pressure.

United players took too many touches in central areas, too. This played into the hands of the Spurs’ swarming out-of-possession strategy. The home side’s most well-created chance came from playing two to three passes inside, before switching to Shaw and delivering the ball early. It is a cause for concern that they only created once from this seemingly obvious tactic.

Overall, the technical quality of Jose Mourinho’s players – all over the pitch – was far below the standard required at this level, most notably in their opponents’ penalty box and in their defensive line. The introduction of Alexis Sanchez for Ander Herrera 10 minutes into the second half did give United more width in attack, as the Chilean was in an advanced position more readily than Valencia, allowing Lukaku and Lingard to increasingly exploit the space between the central defenders. Although they did create more, even Sanchez’s final ball was not up to scratch.

United looked to press Tottenham aggressively out of possession, with Lukaku and Lingard leading the hunt. The structure would take the form of a 5-3-2, with the intention being that the high press would force Tottenham to play long passes into areas where United had numerical superiority. Wing-backs Valencia and Shaw would join the back three to make a line of five, while Matic, Pogba and Fred would stay close together in central areas.

But technical errors were a huge problem out of possession. They regularly created difficult defensive situations for themselves, and errors in closing players down was prevalent. There was an exceptionally low level of organisation when covering for one another – which Mourinho will find impossible to ignore.

Tottenham set up in a 4-2-2-2 formation at Old Trafford. Eric Dier and Mousa Dembele played in front of the back four, with Christian Eriksen and Dele Alli ahead of them. Harry Kane and Lucas Moura led the line.

Spurs would try to position their midfielders and attackers on different lines in possession – vertically and horizontally – in an attempt to pull Manchester United players individually out of position. They struggled to penetrate in the first half due to a lack of movement between the lines and beyond, but this improved significantly in the second period.

Dembele and Dier started to bring the ball higher up the pitch, enticing their opponents towards them, while Alli and Eriksen would look to create penetrative passing angles that allowed Spurs to move into more advanced areas. This was evident in the build-up for their opening two goals – in winning the corner for the first, and in Moura completing an excellent move for the second. With Kieran Trippier and Danny Rose also moving forward more readily, Alli, Eriksen, Moura and Kane, as well as one of Dier or Dembele, could play inside to create and carve an opening on goal from the central areas and half-spaces.

Spurs’ success largely derived from a ruthless desire to take advantage of United’s technical errors. They weren’t afraid to combat the hosts’ aggressive press by using Kane as a target man, and they were similarly effective in utilising the pace of Moura to get in behind the back line or to commit individuals out of their compact unit with direct running on the ball. Tottenham expertly exploited the strengths of their two centre forwards on the night.

Out of possession, meanwhile, Mauricio Pochettino’s players pressed United’s back line with high intensity, regularly forcing them to play long. The press was generally set up in a staggered 4-2-2-2 system, to ensure they limited any vertical passing lines that could open from having just two players on a horizontal line. It was common for Eriksen to join Moura and Kane on the first line to match United’s back three. Rose could then push up to affect Antonio Valencia, as either Eriksen or Alli had left him unmarked to close down Ander Herrera. The central protection of Dembele and Dier meant they were able to swarm Romelu Lukaku and Jesse Lingard whenever they received the ball to feet. Lukaku often had no option but to run at Spurs players and eventually lose possession, with either Alli or Eriksen also often assisting with the recovery.

This system wasn’t without its vulnerabilities, though. The high concentration of Spurs players within these areas around the ball left them exposed to switches in play, but they were quick to regroup and shuffle across in order to deal with the player who had received the ball before he was able to hurt them. While there will be delight over the final scoreline, Tottenham still allowed United to have 22 attempts on goal – there’s clearly still work for Pochettino to do in this area.