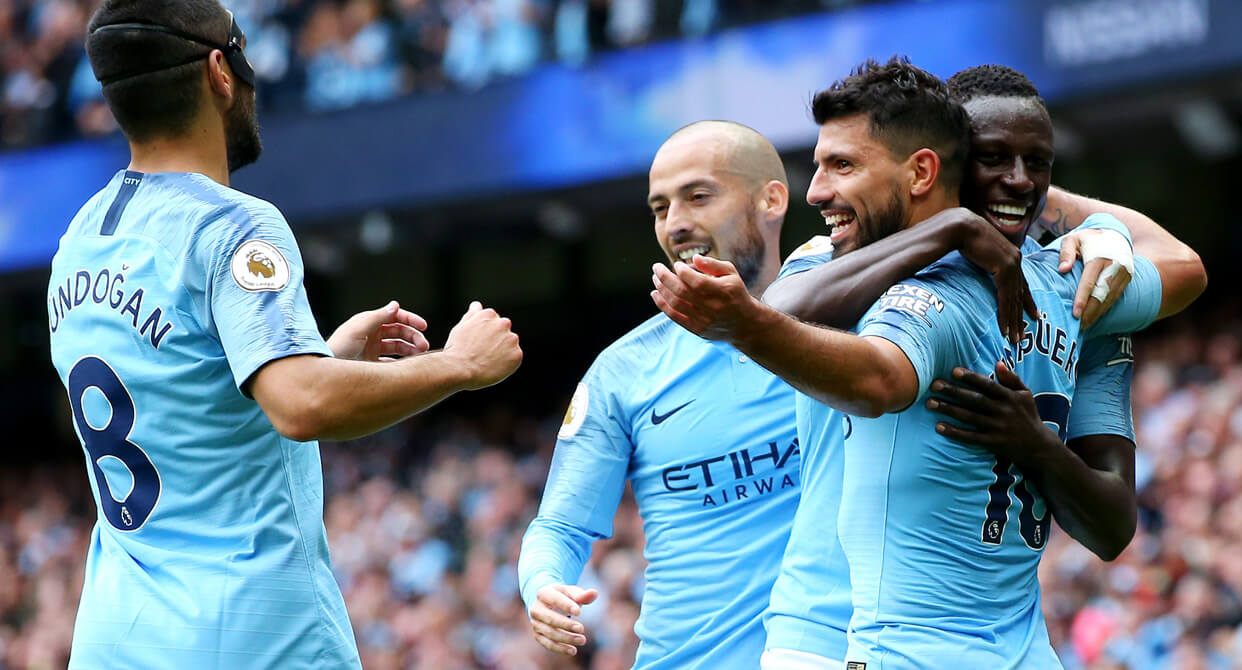 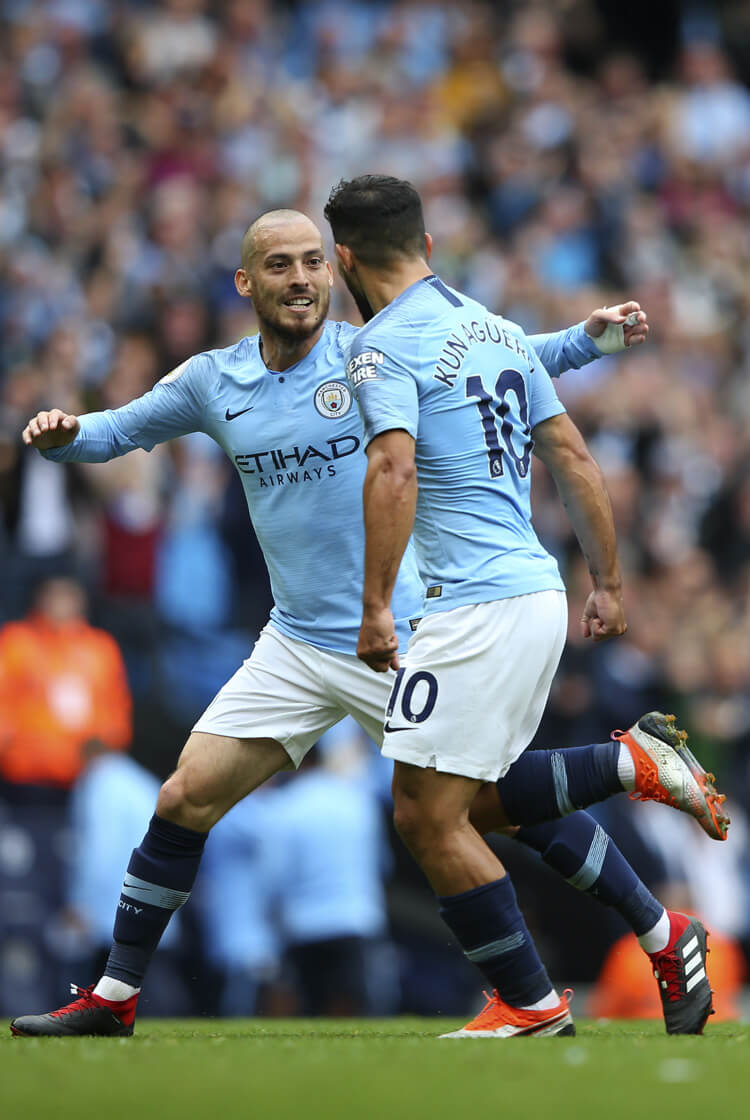 Manchester City have got their season off to a flying start, as the reigning Premier League champions followed their opening-day success at Arsenal with this thrilling victory over Huddersfield on home soil. Sergio Aguero was the star of the show, getting the ball rolling on 25 minutes before going on to complete the ninth Premier League hat-trick of his career – the Argentina international will now have his eyes firmly fixed on Alan Shearer’s record of 11. Gabriel Jesus, with a powerful low drive, and David Silva, with a sublime free-kick, were also in on the goalscoring action, with a Terence Kongolo own goal ending a truly miserable day for David Wagner and his players. Jon Gorenc Stankovic’s strike late in the first half proved little consolation for the Terriers, who sit at the foot of the table after two games. 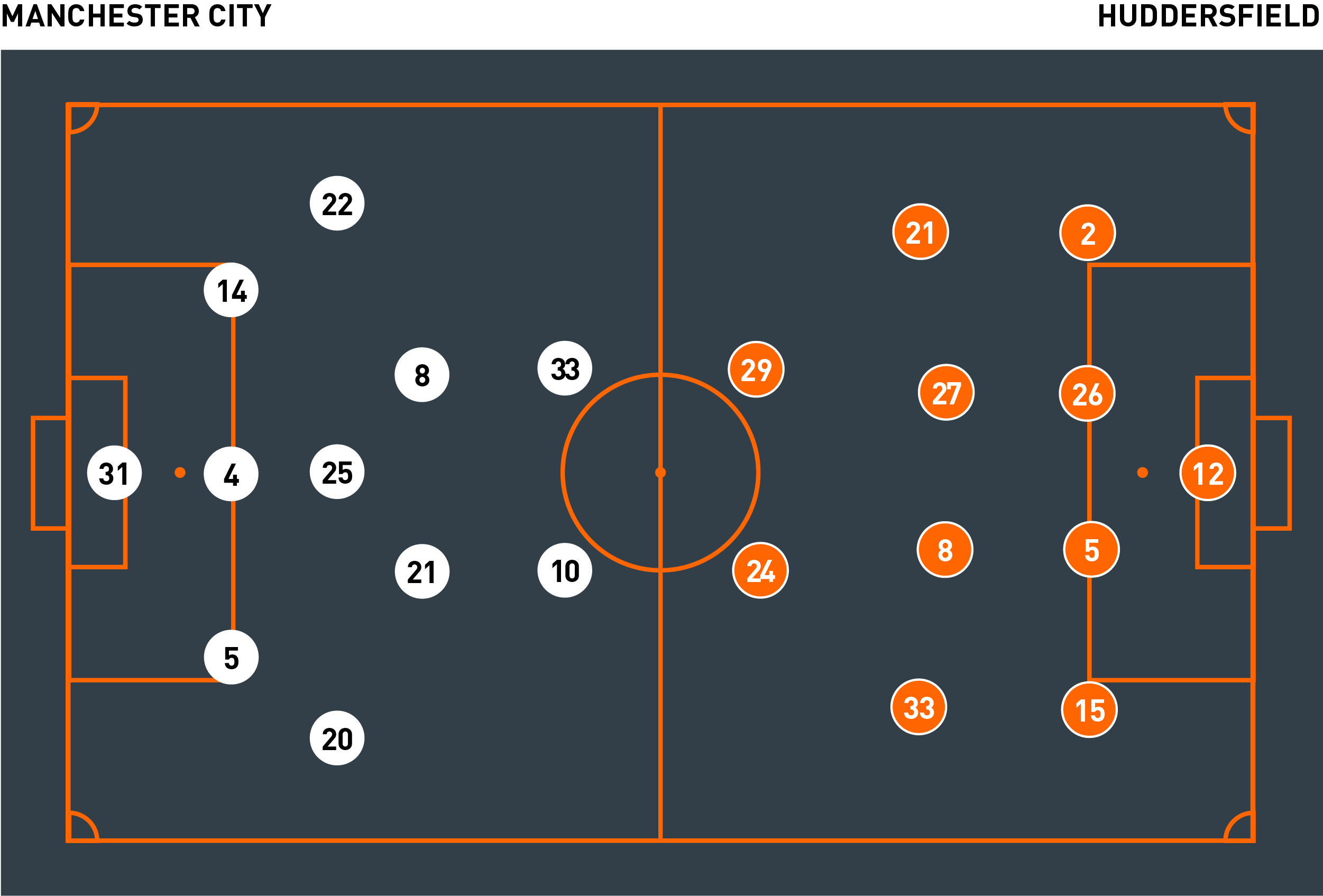 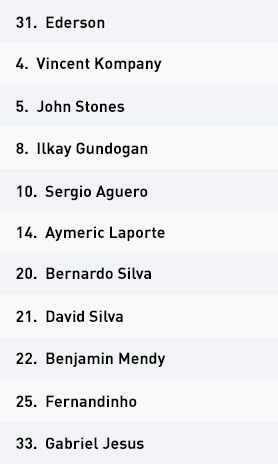 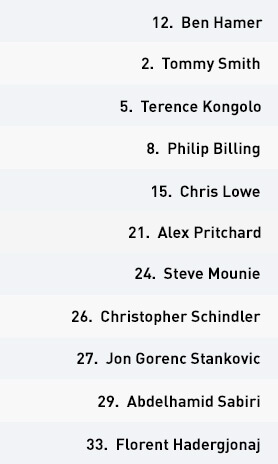 Pep Guardiola made three changes to the team that beat Arsenal in the opening weekend of the Premier League season. Captain Vincent Kompany made his first appearance of the campaign, in place of right-back Kyle Walker. David Silva and Gabriel Jesus were also added to the starting line-up, replacing Riyad Mahrez and Raheem Sterling in a new-look formation.

Manchester City formed an impressive 3-5-2 structure when in possession, with Benjamin Mendy and, perhaps surprisingly, Bernardo Silva in the wing-back roles. Ilkay Gundogan and David Silva supported the pair by occupying the inside channels, as John Stones and Aymeric Laporte also moved high from the back line in support.

After a somewhat unsteady start, City soon displayed control and firmly took hold of the game by dominating possession, with David Silva and Bernardo Silva starting to combine expertly along the right side. Huddersfield adopted a brave man-marking system, initially pressing high when Ederson was restarting the play in an attempt to reduce the free spaces within their opponents’ half, but City’s midfield unit responded by spreading horizontally. David Silva and Gundogan ensured the central lane was vacant – enabling Ederson to send passes into the feet of strikers Sergio Aguero and Gabriel Jesus.

While this carved open Huddersfield’s pressing units, who reverted into a deep low block for the remainder of the opening period, City were struggling to penetrate a compact defence. Nonetheless, with the Terriers unable to break out when the hosts were in possession, City could afford to build with patience.

With the back line of Kompany, Stones and Laporte positioned incredibly high, City formed a horseshoe structure around Huddersfield, giving the away side no chance of a breakaway. Again, the positioning of wing-backs Bernardo Silva and Mendy enabled them to attack both around and through the lines, with David Silva and Gundogan maintaining positions within the inside channel.

With 25 minutes on the clock, Aguero opened his account for the season, delightfully lobbing the ball over an onrushing Ben Hamer in goal. City typically set up with three players very high to create more space for a short build from the goalkeeper, but this time only Aguero threatened the defence in behind. This naturally lured the entire Huddersfield team bar one up the pitch, leaving Aguero with only one defender to beat. A pinpoint goal kick from Ederson sent his forward through on goal; as the goalkeeper charged out, the Argentina international turned back before expertly chipping his side ahead.

It wasn’t long before City added their second and third goals, as their attacking play became increasingly incisive. With Huddersfield behind and now committing to a higher press, City duly exploited the gaps in a previously compact midfield unit. Mendy surged forward and Gabriel Jesus eventually got his name on the scoresheet with a powerful low drive towards the near post. Aguero then grabbed his second of the afternoon, making the most of Hamer spilling Mendy’s first-time cross.

Guardiola will have been frustrated at seeing Huddersfield grab a goal back shortly before half-time, but the hosts reacted by intelligently maintaining possession to prevent any attacking momentum before the interval. In the six minutes between Huddersfield scoring and the half-time whistle, the away side had only four touches of the ball. It was an excellent demonstration from City in the art of managing a game.

The Terriers had no response to a goal-filled first half, and just a few minutes into the second period David Silva’s superb free-kick put the game to bed. Mendy continued to prove a menace, too. His first-time crosses from the left channel consistently disrupted the Huddersfield back line. With City quick to switch the ball, gaps were readily available for the French international to slide balls across just as Huddersfield were adapting their positioning.

Aguero was unlucky to strike the post from distance, but Mendy soon played his part in helping his teammate score the ninth Premier League hat-trick of his career. The left-back provided the delivery, as Aguero expertly flicked the ball into the far corner. Terence Kongolo’s own goal late on confirmed an emphatic, convincing win for the reigning champions.

Huddersfield prepared for another tricky fixture after their 3-0 defeat to Chelsea in the opening weekend of fixtures. Head coach David Wagner changed his side’s formation, opting for a defensive back four against the reigning champions. Tommy Smith, Jon Gorenc Stankovic and Abdelhamid Sabiri were all introduced to the starting line-up, taking the places of Aaron Mooy, Mathias Jorgensen and Jonathan Hogg.

The away side maintained a compact defensive low block within the opening exchanges, and their 4-4-2 structure was initially successful in blocking Manchester City’s early attacks. Interestingly, they adopted an aggressive, higher press when Ederson was involved with the build. Looking to restrict the space available, they pushed numbers and units up the pitch in the hope of recovering the ball deep inside the hosts’ half. Ederson, though, was unfazed by this strategy, and after a few sublime passes from the City goalkeeper, Huddersfield soon aborted that plan, reverting to a very deep block. City could now play out with ease and dominate possession.

With City becoming frustrated at a lack of clear-cut chances, lone pivot Fernandinho began to drive his side forward – but he was often caught in possession. As Huddersfield were transitioning, they had central access to attack their opponents’ back three, as the majority of their teammates were positioned well ahead of the ball. But rather than attacking with direct dribbles, the Terriers’ midfield elected to pass back to the full-backs in the channels. This lack of proactive forward passes on the regain ensured their threat on the City goal was minimal.

Their defence soon cracked, as they succumbed to a simple yet superb long ball from Ederson that left Sergio Aguero one on one with the last defender. Ben Hamer unnecessarily charged out of his goal, despite Aguero still having to beat his man before attempting a shot on goal. With Hamer well off his line, a delicate chip was all that was required to leave the visitors behind. Their hand was now forced, and all three outfield units started to push higher in search of a comeback.

Giving such space to this City midfield is a significant risk, and within 10 minutes Huddersfield had conceded another two goals. Gabriel Jesus’ powerful low strike travelled through multiple bodies before beating Hamer, but there can be no excuses for the third. Hamer spilled a low cross from Benjamin Mendy into the path of Aguero, who tapped home his second of the contest.

The home supporters were given something to cheer about when Philip Billing’s routine long throw into the penalty resulted in a surprise goal from Stankovic after Steve Mounie had flicked the ball on. This was their last piece of attacking play, however, as between the goal and the half-time whistle, they saw nothing of the ball.

The second half continued in the same manner as the first, with Huddersfield helpless against the superior skill and possession of the home side. David Silva’s free-kick three minutes after the restart ended any early hopes of a revival. Despite adding target man Laurent Depoitre to the attack, the Terriers rarely won loose balls or high defensive clearances, as John Stones and Aymeric Laporte were excellent in the air against the substitute.

While they made far more progress with the ball in the second half, they had little hope of upsetting their opponents. Their best hope of a consolation goal was from attacking set-pieces, but these didn’t deliver anything of note. City’s back line had learned their lesson from conceding in the first half.

Aguero went on to complete his hat-trick, before a Terence Kongolo own goal completed a day to forget for the visitors. Wagner will be concerned by a goal difference of -8 after only two games, but at least the Terriers have two of the Premier League’s toughest fixtures out of the way early in the campaign.