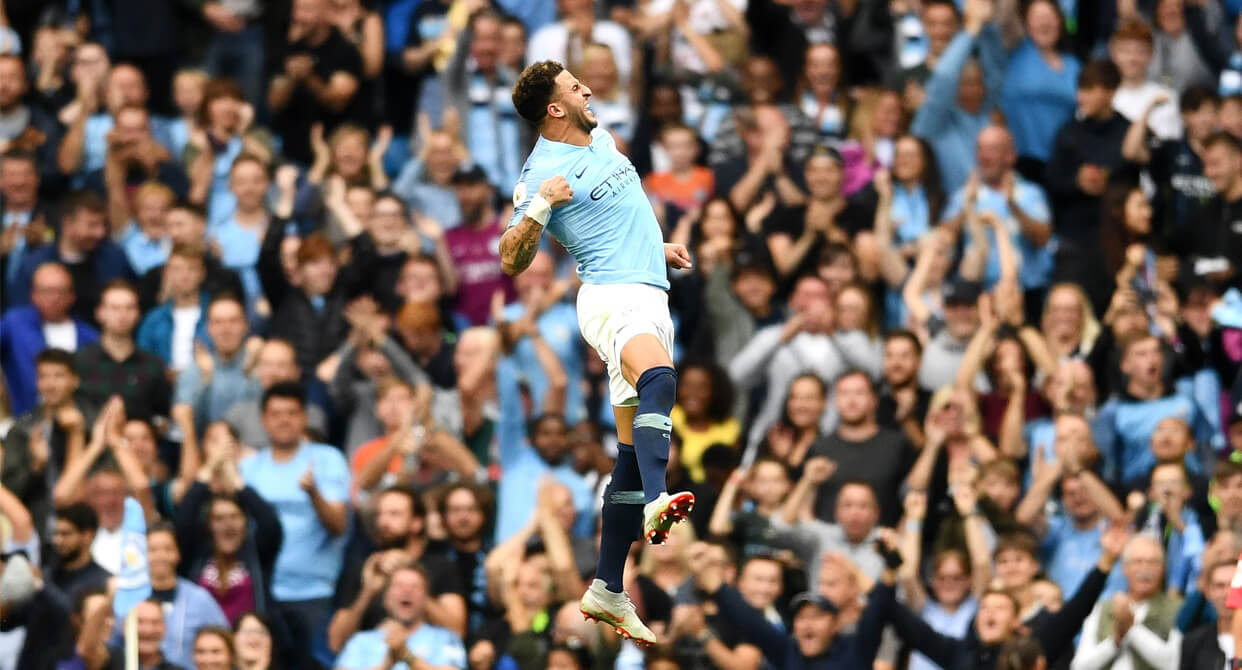 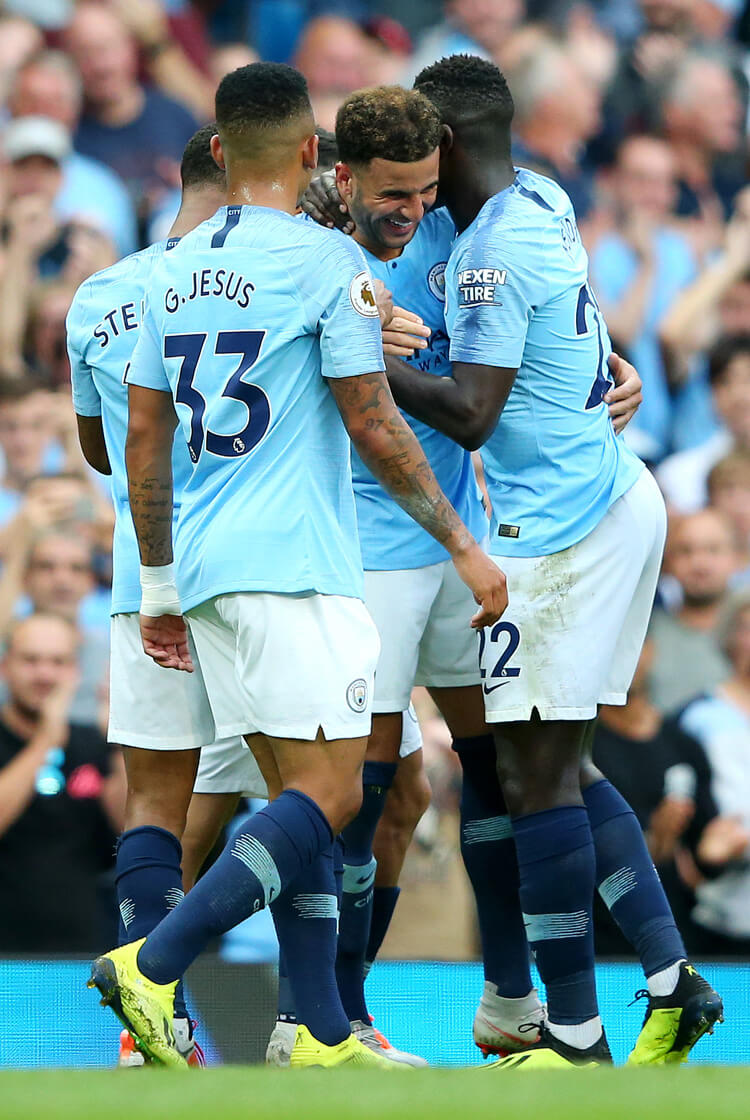 Manchester City bounced back from the disappointment of drawing at Wolves in their previous Premier League fixture with this victory at home to Newcastle. Raheem Sterling had drawn first blood eight minutes in at the Etihad, but the hosts were punished for missing a handful of chances when DeAndre Yedlin tapped home at the far post to grab the equaliser for the Magpies before half-time. Pep Guardiola’s men reasserted their dominance in the second half, though, and Kyle Walker got his name on the scoresheet for the first time in a City shirt, scoring the winning goal with a low drive from distance. Newcastle have only one point on the board from their opening four games; Rafael Benitez can only hope his players return from the international break determined to improve results sharpish. 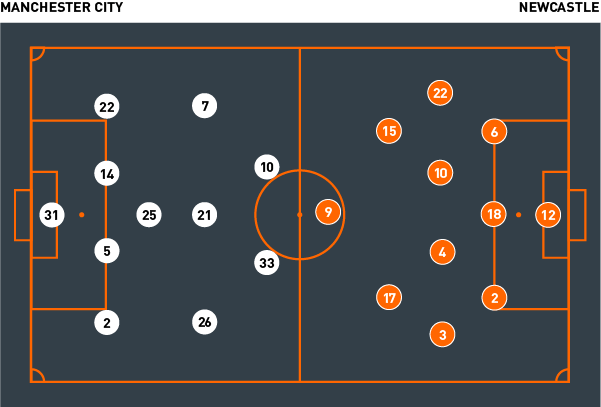 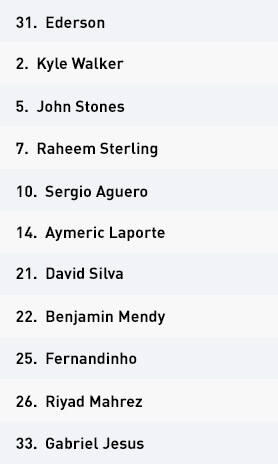 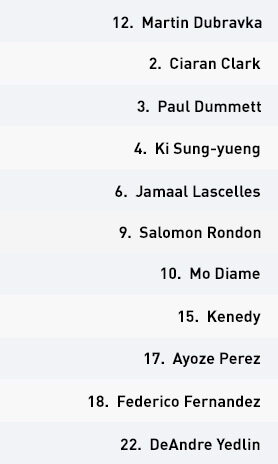 Head coach Pep Guardiola made two changes to the side that drew at Wolves, as he converted his defence from a back three to a back four. Captain Vincent Kompany and Bernardo Silva were withdrawn and replaced by two wide attacking midfielders in Raheem Sterling and Riyad Mahrez.

When in possession, Manchester City looked to place three attackers in the central lane behind the Newcastle midfield. David Silva joined forwards Gabriel Jesus and Sergio Aguero in the central spaces, meaning each of their opponents’ three central defenders had a player to mark throughout. Sterling and Mahrez provided maximum attacking width, aiming to horizontally stretch the back line as much as possible.

In contrast to their previous game, full-backs Kyle Walker and Benjamin Mendy returned to the inside channels, rather than occupying spaces in the wide areas. This allowed for diagonal passes during their short build-up into their partnered winger, who could receive facing forwards before attacking their respective marker more effectively. With Walker and Mendy’s positioning occupying both of Newcastle’s wide players, lone striker Salomon Rondon was without support when pressing City’s central defenders and pivot Fernandinho.

City broke the deadlock only eight minutes in, when Sterling pounced on a poor pass out from defender Jamaal Lascelles. The England international cut inside from the left before unleashing a low drive into the bottom corner. His wide starting position ensured he remained on the blind side of right-back DeAndre Yedlin, who was smartly occupied by the positioning of Aguero. Left-back Mendy’s inside positioning once again proved an effective choice, as it was his interception that set up the goal.

Subtle movements from David Silva between the lines provided passing lanes forward, and Fernandinho started to find the Spaniard after recovering from a sloppy start. But Walker’s positioning grew in importance, as Silva quickly became blocked off by the cover shadow of Newcastle’s central midfield. The latter adjusted his movement into the inside channel, creating an angle to receive from the right-back before looking to move the ball into the attacking third.

Despite dominating, City conceded through an effective counter-attack from Newcastle. With Mahrez and Sterling asked to provide extreme width when in possession, they lacked additional supporting pressers when the ball was lost. Neither supporting full-back could commit forward, as they were required to track the forward runs of Kenedy and Ayoze Perez. City’s front line were also unattached to Mahrez in particular on the defensive transition, with their role in possession to remain high and occupy the central defence. Losses of possession on their right side proved more costly than in any other area of the pitch.

In addition, playing the left-footed Mahrez on the right side also prohibited first-time crosses. Despite early runners able to attack the Newcastle central defence, Mahrez’s inability to cross first time on his right foot delayed the ball into the penalty area – and this reduced the overall effectiveness of City’s attacks from their right side. Guardiola will surely have noted this.

Their dominance of possession continued well into the second half, though, and their lead was restored early in the second period. Aguero regularly dropped deepest of the central attacking trio, with the aim of linking more closely with Mendy and Sterling from the left. Simultaneous movements across and behind from David Silva and Gabriel Jesus drew additional defenders around the ball, creating significant spaces within the right inside channel. Aguero eventually found Walker, who struck an arrowing low shot into the far corner from well outside the penalty area.

City’s build into midfield was simple and effective, as Rondon was helpless against the triangle of Stones, Laporte and Fernandinho. Stones and Laporte frequently drove forward in possession in the last half hour, while Bernardo Silva’s introduction for Jesus just before the hour maintained their central presence behind their opponents’ midfield. The visitors’ narrow midfield opened spaces in the wide areas for Sterling and Mahrez, and also allowed for surging runs from both David and Bernardo Silva.

Newcastle adapted by trying to overload the ballside, but this again opened the wide areas and inside channels on the opposite side of the pitch. When City quickly switched the play, they were able to get in behind the defence and penetrate the penalty area. Despite dominating the ball until the full-time whistle, however, they couldn’t add to their two goals – but they still came away with three points that keep the pressure on 100 per cent starters Liverpool, Chelsea and Watford.

Newcastle lined up with three changes, as wide midfielders Matt Ritchie and Jacob Murphy were replaced by Kenedy and Ayoze Perez. Captain Jamaal Lascelles also returned, replacing Fabian Schar in the centre of the visitors’ defence.

Visiting teams naturally prioritise attacking during moments of transition at the Etihad, rather than through prolonged periods of possession – and that was the case for the Magpies. Despite being presented with early chances to counter-attack from deep, the midfield couldn’t take advantage of these opportunities. Salomon Rondon initially held the ball up well – even when against the collapsing central trio of John Stones, Aymeric Laporte and Fernandinho – but inside runs from wide pair Perez and Kenedy only served to congest the central lane.

Fernandinho was particularly sloppy in possession in the early exchanges, which created additional opportunities for Newcastle to transition from midfield into attack. When supported by movements away from the ball by Kenedy and Perez (and into the inside channels or wide areas), they progressed the ball well into the final third. But speedy recovery runs from the Manchester City defence made it difficult to create the final shot on goal.

Early diagonal balls forward, coupled with forward runs from Kennedy and Perez away from the central lane, ensured their threat on the break remained. Now successfully penetrating their opponents, it was a lack of ability in beating their men one on one in the final third that limited their ability to threaten goalkeeper Ederson. They needed more supporting runners forward.

Nonetheless, Newcastle drew level just before the half-hour mark. They adapted their transition to include more direct aerial balls forward, exploiting their opponents’ high defensive line. As Perez clipped the ball forward for Kenedy and Rondon to combine, right-back DeAndre Yedlin provided the supporting run from deep that Newcastle had been missing before tapping home at the far post.

The Magpies frustrated City for a lengthy period after equalising, but the hosts restored their lead early in the second half. Head coach Rafa Benitez reacted by replacing Kenedy with Christian Atsu on the right side of midfield, hoping to add more pace and directness to their attacking transitions.

In truth, they hardly saw anything of the ball. Rondon was helpless to stop Aymeric Laporte or John Stones driving forward into Newcastle’s half, while Bernardo Silva’s introduction troubled their narrow midfield unit and created more spaces for Raheem Sterling and Riyad Mahrez to attack in the wide areas. Sterling was eventually double-marked by a combination of Yedlin and Atsu, but this soon drew left-back Benjamin Mendy back into the game. The Frenchman was free to cross into the penalty area from deeper positions.

With Atsu having more defensive work to do than he would have hoped, Newcastle’s attacking transitions into the wide areas soon lost the sharpness of the first half. With less ground to cover, Mendy could comfortably recover – it therefore became a straight duel between Sterling and Atsu down Newcastle’s right. Sterling consistently won this battle, which halted the visitors’ progress and significantly reduced the quantity and quality of their attacking play.

Newcastle’s midfield soon became weary from constant pressing and readjusting to their opponents’ dominance. When they did regain possession, they lacked the energy to attack with numbers. Despite the introduction of three attack-minded players and their structure being converted to a 4-4-2, they failed to create clear-cut chances on Ederson’s goal. Newcastle headed home still without a Premier League win this season.