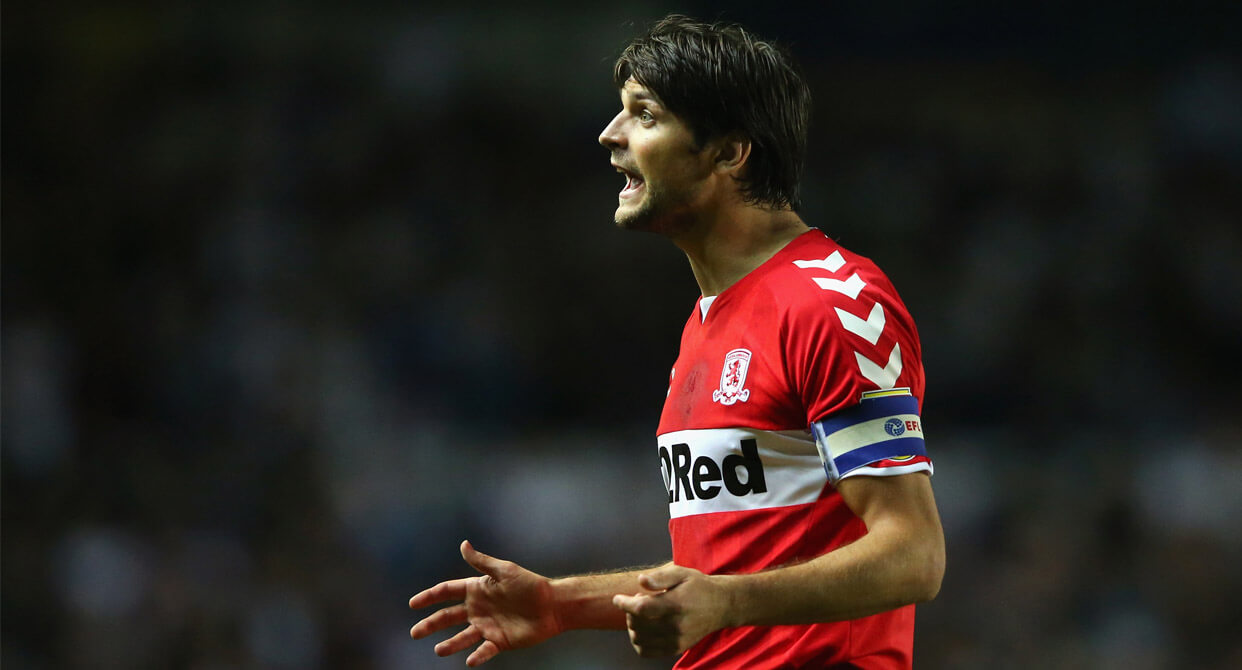 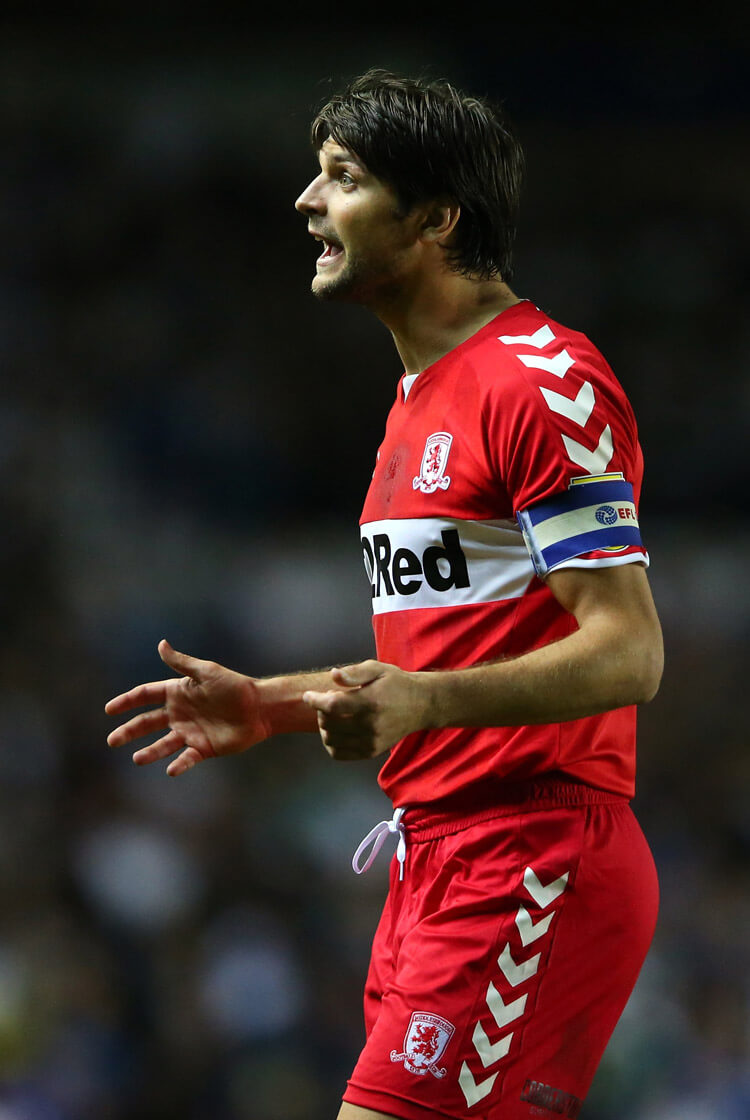 Leeds and Middlesbrough played out a goalless draw that left much to be desired at Elland Road, but the resulting point apiece could prove invaluable come the end of the Championship season. Marcelo Bielsa’s side sit top of the table, above Boro on goal difference, but failed to break down a defence that hasn’t been beaten in the league since the opening day of the season. It was a largely scrappy encounter of few genuine chances, although Luke Ayling had a header cleared off the line for the hosts in the first half, while Jonny Howson and Britt Assombalonga came close for the visitors. Despite a lack of entertainment, both will nonetheless be delighted to extend their respective unbeaten starts to the campaign. 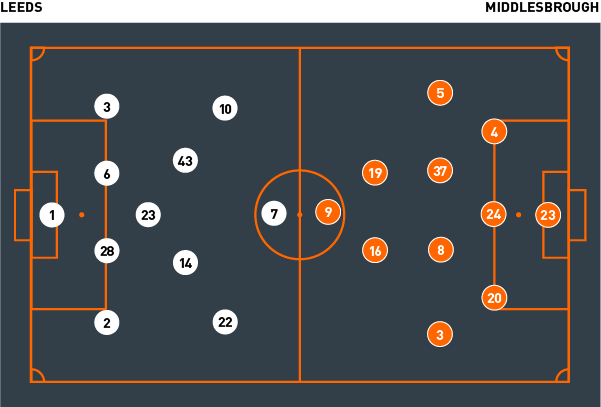 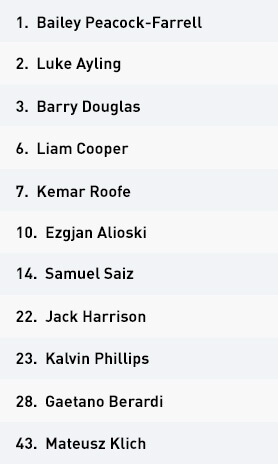 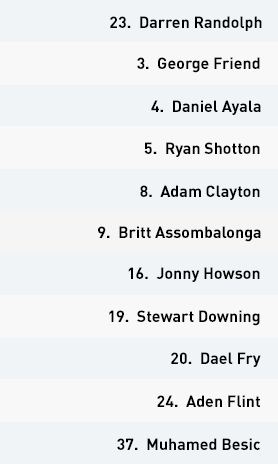 Marcelo Bielsa made two changes from the impressive away league victory over Norwich City. Club captain Liam Cooper came in for Pontus Jansson in central defence, while the injured Pablo Hernandez was replaced by Manchester City loanee Jack Harrison in midfield.

After a tough and scrappy start, Leeds soon settled in possession. Middlesbrough converted into a mid-block, allowing the hosts to comfortably build short from goalkeeper Bailey Peacock-Farrell. The early penetration into Boro’s final third was through long and direct passes from the centre-backs, as they targeted the wide areas.

With the away side setting up with a central back three, there was space along the sides of Boro’s compact central defensive unit for Harrison in particular to surge forward from the right. From here, the visitors’ left centre-back Dael Fry was forced to vacate the central lane to apply heavy pressure on Harrison’s first touch. The now vacant central space was duly exploited by the late-running central midfielders Samuel Saiz and Mat Klich – but Leeds failed to muster attempts on goal despite progressing the ball forward effectively.

As the away side adapted their structure, right-back Luke Ayling began to move inside into a false full-back role – especially when the ball was being built from deep along Leeds’ left channel. This inside positioning from Ayling also lured Middlesbrough’s Jonny Howson into central areas, creating a one-on-one for Harrison against the much slower Fry. But Leeds couldn’t take advantage of Harrison’s attacking threat, as their opponents’ back line dealt with every subsequent ball into the penalty area.

Leeds’ penetration into the attacking third was soon nullified altogether by Boro’s adapted back four. With left wing-back George Friend stepping out of the back line and into midfield, Ayling was pressed far sooner. This forced the right-back to take fewer touches and progress the ball into Harrison much quicker. Although this initially seemed a positive tactic, Harrison lacked the time to readjust his body away from Fry – now his permanent marker – before attempting to turn or combine with runners.

Marcelo Bielsa made no changes at the interval, and it was again Leeds who started the second half the brighter. Both full-backs moved into extremely high positions, as they looked to combine with the wingers in wide areas. Barry Douglas, whose progress had been relatively limited in the first half, ventured forward at speed from left-back, luring the recovering Stewart Downing away from left winger Ezgjan Alioski.

This attacking structure forced Boro into an extremely deep and compact block. Although this hindered the space through which Leeds could penetrate in the final third, it also killed any threat the away side could pose on the counter-attack. Douglas’ overlapping runs provided the Leeds midfield with maximum attacking width from the left, which then allowed Alioski far more attacking freedom to step inside. Lone striker Kemar Roofe positioned himself between two Boro centre-backs, which allowed Alioski a free run into the inside channel. Despite working efforts on goal, however, most were tame and from distance.

Leeds’ frustrations grew and, as a result, the midfield often lost possession by dribbling into areas of congestion. This finally opened the door for Boro to counter, particularly down the Leeds left – although the hosts often had good numbers recovering to thwart any threat.

In increasing the pressure late on, Leeds threw multiple players ahead of the ball in a far more direct approach – but this meant they were lacking connections within midfield. Despite Boro’s midfield tiring, Kalvin Phillips was missing teammates in close proximity to help build the ball from midfield into the final third. Ayling could have stepped back inside from right-back to become the link in central midfield, before playing the ball into the vast array of attacking players between the lines. But Leeds failed to create effective passing options to hurt Middlesbrough in the closing moments – and failed to score for the first time in the Championship this season.

Tony Pulis opted for a change in structure from the 3-5-2 that achieved a last-minute victory over West Brom in their previous fixture, as Middlesbrough looked to maintain their unbeaten start to the campaign. The manager set up in a versatile 3-4-2-1 formation, with wantaway forward Martin Brathwaite replaced by combative central midfielder Muhamed Besic.

The away side were content in allowing Leeds to build short, as central striker Britt Assombalonga was their only attacking option to hit during moments of transition. In order to bring an extra player into midfield, Boro often switched from a back five to a back four, with Ryan Shotton moving from a right wing-back role into a more traditional right-back position, and left wing-back George Friend stepping into midfield to create an asymmetrical 4-3-3 structure when in possession. But with Leeds dominating possession, they couldn’t really develop this new system and looked short of quality on the ball when under intense pressure.

A lack of possession eventually frustrated the likes of Jonny Howson and Stewart Downing, who initially formed an advanced central trio with Assombalonga between the lines of Leeds’ defence and midfield. The pair eventually dropped in front of the Leeds midfield, ensuring Assombalonga was the only central passing option in an advanced position. Boro thus suffered from a lack of penetrative passing options, and rarely broke the lines of their opponents’ midfield.

Defensively, however, they remained resolute, containing the home side’s expansive movements and rotations in midfield. Besic and Adam Clayton were superb when contesting and winning loose balls within central midfield, which drastically reduced the effect of any counter-attacks from the home side. After winning the loose ball, the pair would smoothly play out, utilising simple short passes within the midfield third. But they still lacked bodies behind Leeds’ midfield unit, which ultimately resulted in possession without penetration.

Boro continued in the same manner well into the second half, allowing Leeds to build short and maintain the ball within midfield. Downing was forced to provide more recovery runs in the early parts of the second half, as Leeds’ left-back Barry Douglas marauded forward. This isolated Assombalonga even more than in the first half; the lonely forward spent virtually the entire second period chasing down hopeless clearances with the aim of simply drawing fouls.

Although Boro were largely limited with their counter-attacking opportunities, Leeds’ midfield and defence maintained an aggressive counter-press – and space did eventually open for the visitors to exploit. The hosts were excellent when passing their way into the final third, but if they attempted dribbles their success dropped. Not surprisingly, the Boro midfield tried to encourage the dribble through jockeying and withdrawing, rather than pressing intensely. Once the defence was set, effective tackling from Shotton, Besic and Clayton in particular created opportunities to transition forward.

Downing often found spaces to exploit from the right, as left-back Douglas had aggressively pressed into central areas. This was especially damaging if it was Klich or Saiz who had lost possession of the ball, with the latter in particular a keen dribbler. With Douglas now out of position in covering the midfield, Downing drew a central defender out, creating more room for Assombalonga to poach inside the penalty area. Despite creating momentum on the break, however, Boro lacked the incisive attacking cohesion required between midfield and attack.

The visitors came under late pressure, but had more than enough defensive bodies to congest the play and battle to a goalless draw, gaining an invaluable away point against the early league leaders.