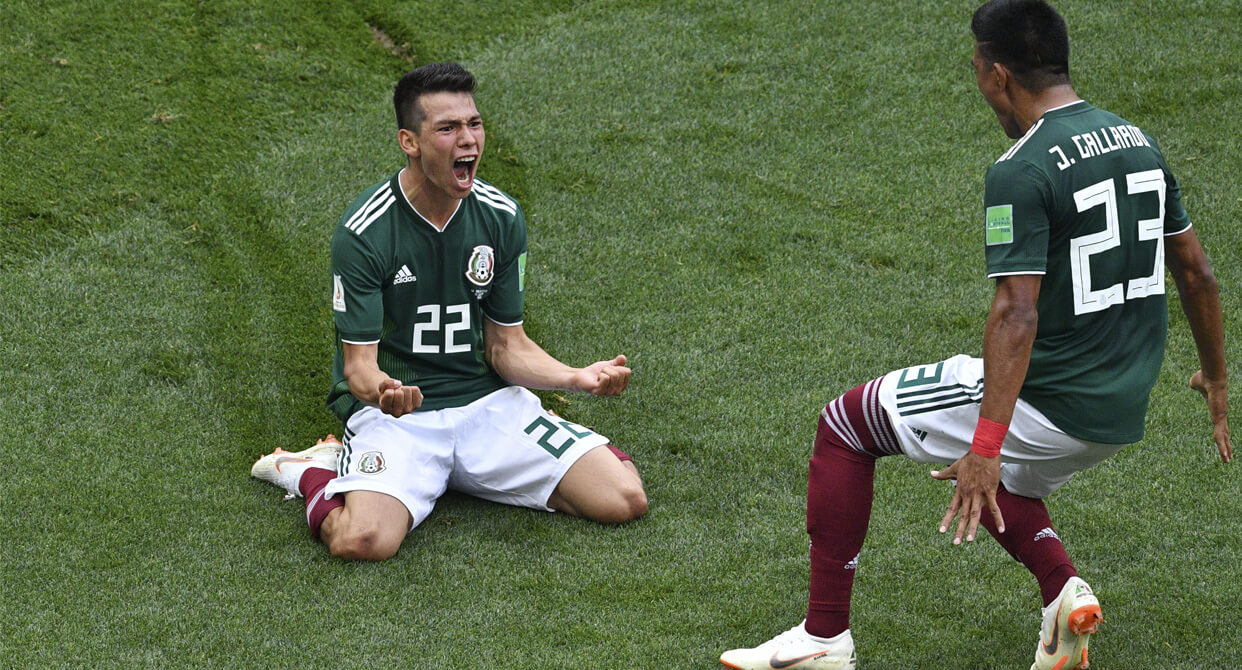 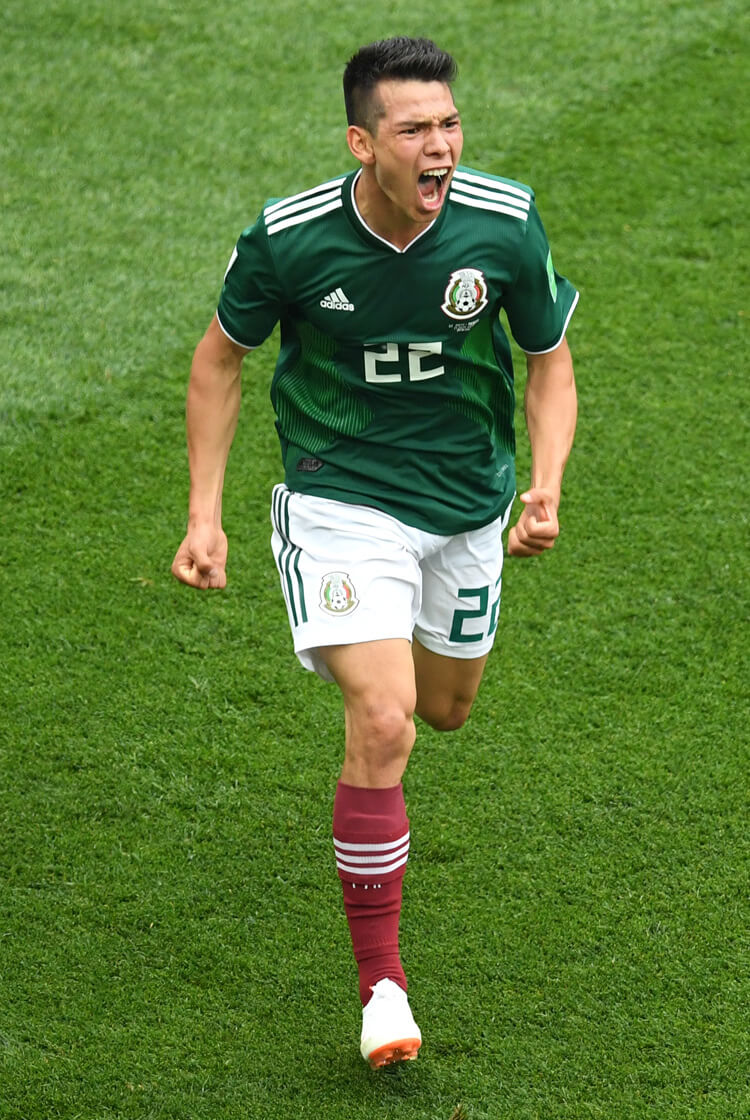 It was a start to this summer’s World Cup tournament to forget for holders Germany, as a brilliant performance from Mexico saw Joachim Low’s team suffer defeat. Hirving Lozano’s goal in the 35th minute, coming from a wonderful counter-attack and assist by West Ham forward Javier Hernandez, was all that was needed to decide the Group F contest, with Die Mannschaft unable to hit back as they fell to a first World Cup defeat since the 2010 semi finals. Here, our professional coaches analyse the tactics and key moments from Mexico's win – and assess what went wrong for Low and Germany. 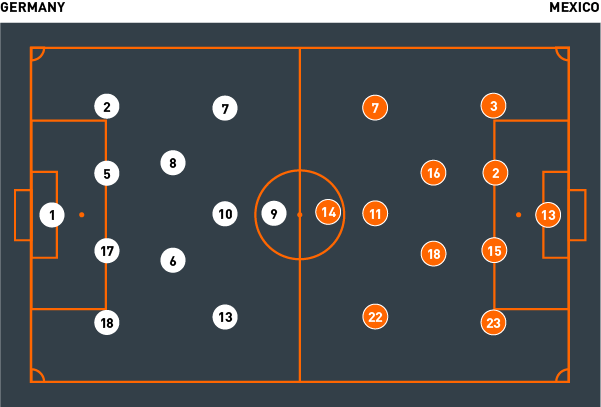 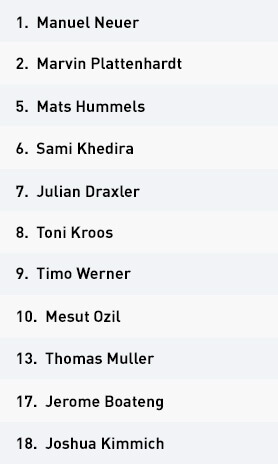 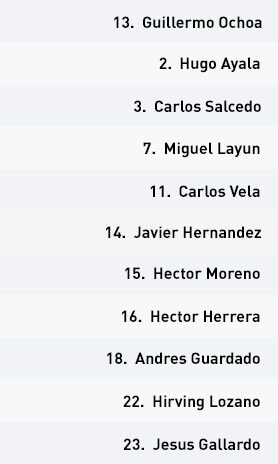 The reigning world champions began in a 4-2-3-1 structure, as they looked to aggressively pin back the Mexico defence from the first whistle. Both full-backs, Joshua Kimmich and Marvin Plattenhardt, immediately took up advanced positions, as Arsenal playmaker Mesut Ozil roamed between the lines in the number 10 role.

To begin with, Timo Werner’s movements complemented those of Thomas Muller, as they both rotated fluidly down Germany’s right side. Muller’s movements in particular were confusing the Mexico central defenders, as they were initially focused on the threat of Werner and his movements in behind their defensive line.

With no genuine defensive midfielder, however, Germany were vulnerable during defensive transitions. The lack of adequate cover created a huge gap between their defensive and midfield units, which was open to attack as Mexico transitioned forwards.

Mexico’s strategy of aggressively man-marking Toni Kroos disrupted their controlled build-up play. With Kroos unable to lose his man – either Javier Hernandez or Carlos Vela – Germany’s connection from defence to attack was poor. To combat this, Germany had to effectively ignore their best passer of the ball, as they looked to convert their possession into attacks.

The strategy on Kroos had an additional advantage for Mexico. As Kroos exaggerated his movements – hoping his marker wouldn't follow him over an increased distance – he found himself further away from the central lane. Germany now had zero defensive protection to stop balls going straight into the Mexico strikers. Centre-backs Mats Hummels and Jerome Boateng were left massively exposed, and duly punished by a rapid Mexico counter-attack as the underdogs took a surprise lead.

Ozil began to drop into much deeper positions to aid the build into midfield, covering for the absent Kroos, which enabled Khedira to break forward with well-timed late runs into the penalty area. Although the Germans worked the ball into dangerous positions, the Mexico defence held on until the break.

Germany immediately started the second half on the front foot. Exhaustive pressure on the Mexico back line lasted for the majority of the second half, as the Germans threw everything they had at them. Hummels and Boateng tried to drive forward in possession, hoping they would lure Kroos’ marker away to free the influential midfielder. This was to no avail, as both defenders now found themselves dangerously high up the pitch with Mexico ready to pounce with more lethal counter-attacks.

Head coach Joachim Low threw on Marco Reus and Mario Gomez to bolster the attack. Germany converted into a 4-2-4 structure, as they looked to pin Mexico deep within their half. The combination of Ozil permanently dropping deeper and Mexico beginning to retreat finally released Kroos into action for Germany – although time was against them.

Despite looking much more fluid in possession in the final 15 minutes, Germany failed to break through. The best chance fell to substitute Mario Gomez, who headed over from six yards. Final substitute Julian Brandt also volleyed agonisingly close.

Mexico began their 2018 World Cup campaign using a 4-2-3-1 structure. This basic shape remained intact both in and out of possession, as they prioritised hitting Germany on the break.

The immediate goal of the Mexico midfield was to find the feet of either Javier Hernandez or Carlos Vela, who dropped deeper into the number 10 role. Mexico’s penetrative passing proved a menace for the Germany back line throughout, as they couldn’t contain the speed of Mexico’s counter-attacks.

The decision to permanently man-mark Toni Kroos was genius. It not only stopped the Germans from cleanly building from defence, but his exaggerated movements opened up the central lane for Mexico to exploit. As soon as they regained possession, there was a gaping hole in the centre of the pitch for Mexico to drive straight through.

With both German full-backs also advancing very high, they could continue to attack down the centre or exploit the space in the channels. Mexico’s counter-attacks were mainly focused down their left side, as German left-back Marvin Plattenhardt reduced his runs forward.

After some early warning signs, Mexico had their lead. Aggressive pressing led to a turnover in midfield and Mexico charged forward. Hernandez duly exploited the central space with minimal German midfield presence and unleashed Hirving Lozano. The mobile winger cut inside from the left – against a desperate and surprising last defender Ozil – and delivered a low drive past Manuel Neuer.

Mexico began the second half on the back foot, as the anticipated German barrage began. During the brief interludes where they had possession, they targeted longer balls from deep, aiming for the vacant space between the German defence and midfield.

Both Vela and Hernandez worked tirelessly to compete for these balls forward, but their opponents’ central defence dominated in the air. Germany were, however, still susceptible to the Mexican counter, as they themselves began to drive forward with the ball. This consequently created more space in behind; any time Mexico regained possession, they targeted the corresponding side of the German defence and attacked with speed.

Impressively, Mexico were calm in possession, particularly just after a regain in their defensive third. Germany’s counter-pressing was sporadic and individual. Unnaturally, there was a distinct lack of German cohesion, and the Mexico midfield maintained the ball well in the latter stages.

They slowly reduced into a very deep defensive block, naturally aiming to protect their lead. They no longer left three players high when defending, and eventually brought everyone back into their own defensive third to help see the game out.