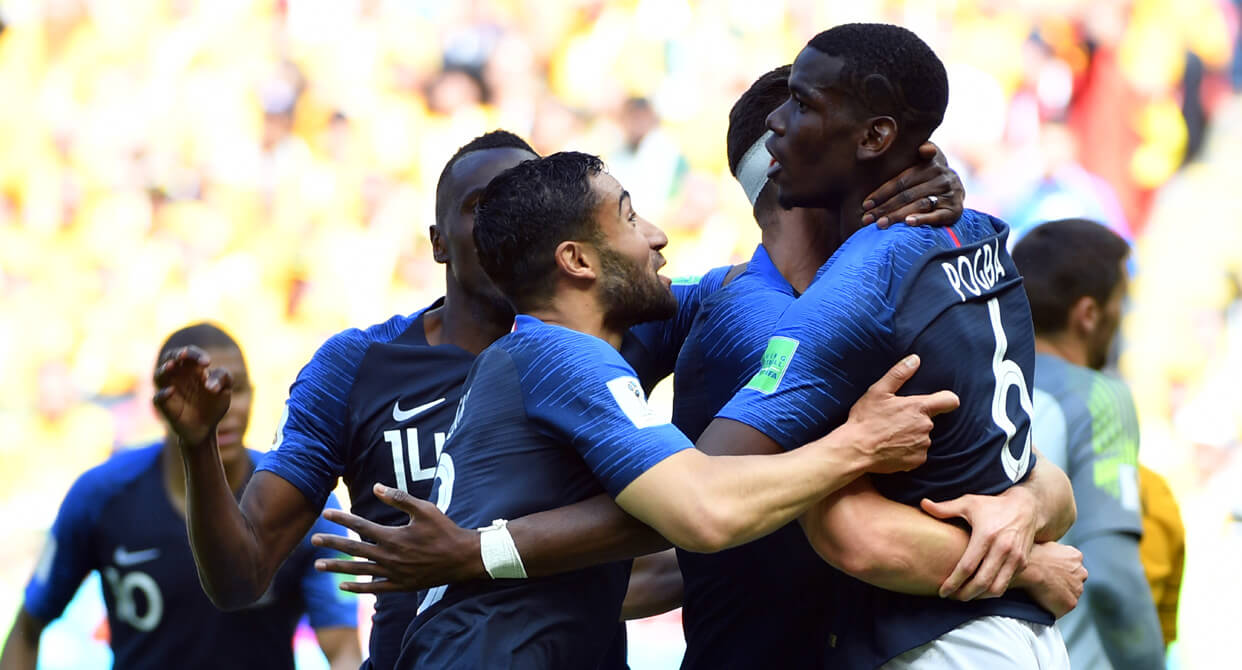 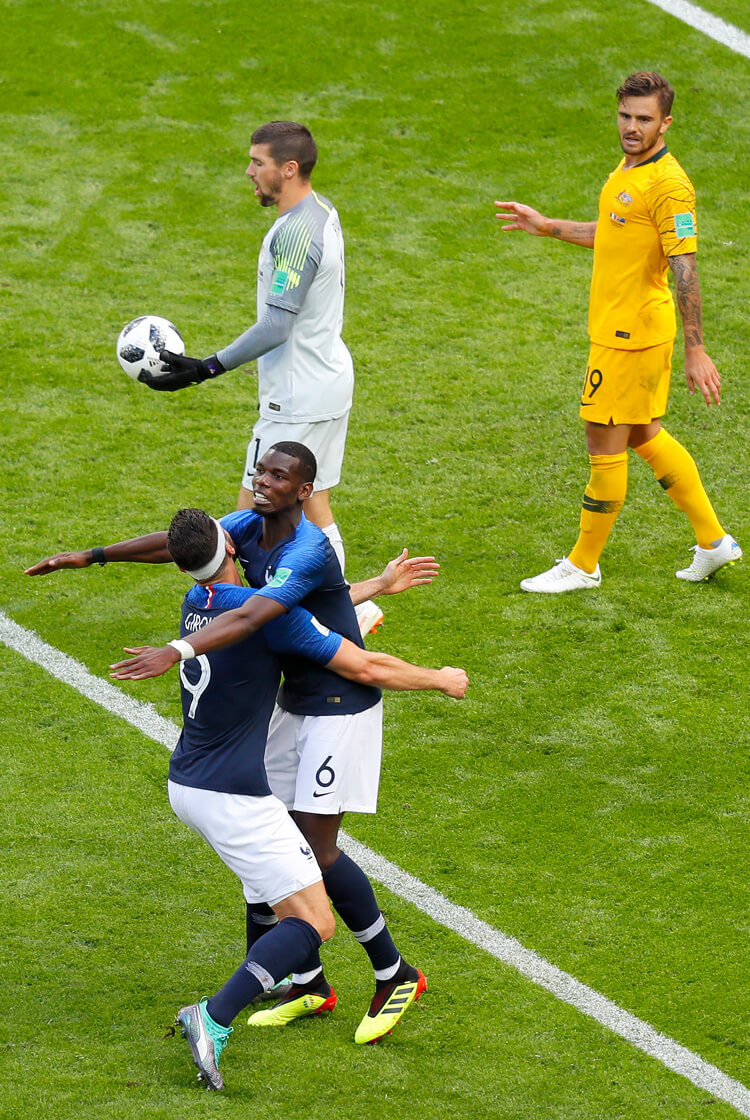 Paul Pogba rescued France in the closing stages of their opening game of the 2018 World Cup finals against Australia, as VAR stole the limelight. Both French goals came courtesy of technology – the first a VAR-assisted penalty from Atletico Madrid forward Antoine Griezmann, and the second awarded via goalline technology. Australia were on course to hold one of the favourites to go all the way in the tournament before a lobbed effort from Pogba deflected off Australia full-back Aziz Behich and into the back of the net in the 80th minute. Here, our professional coaches have their say on the action. 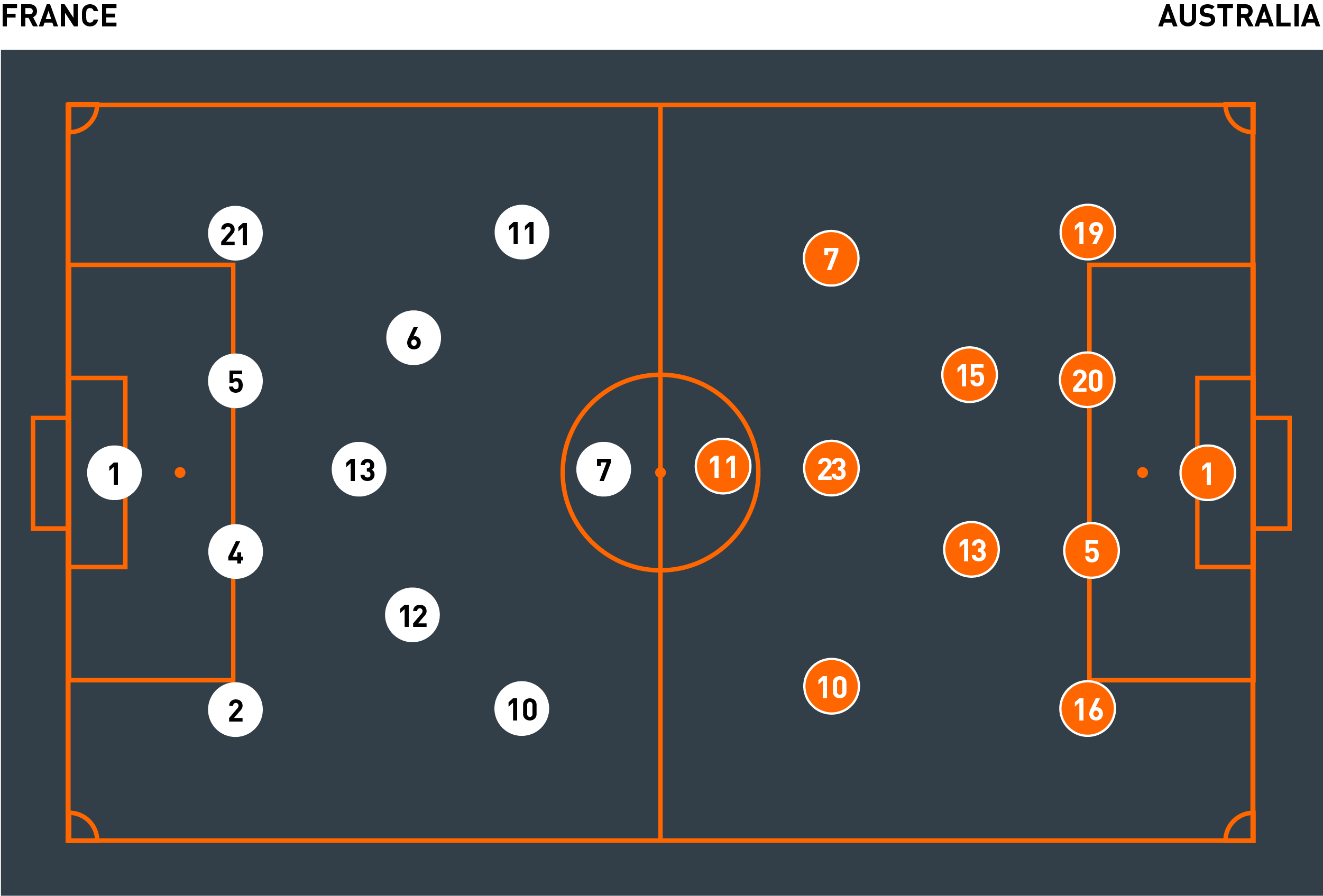 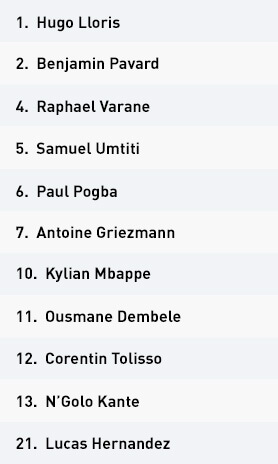 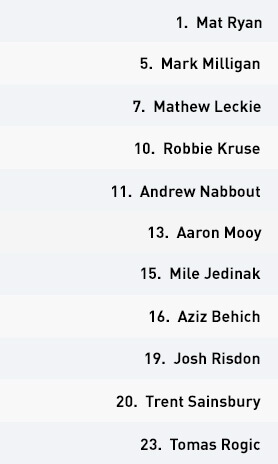 France began their 2018 World Cup tournament with a very attack-minded front line. Kylian Mbappe, Antoine Griezmann and Ousmane Dembele began as a fluid, rotating front three. Initially, Mbappe began as the central forward, with Dembele and Griezmann supporting from the wider areas. The pace of Mbappe tested out the Australian back line in the opening exchanges, as France looked to build in the central lane.

In support of the attack, both full-backs, Benjamin Pavard and Lucas Hernandez, began to move higher in possession. However, the French attack looked slightly disjointed in the opening 15 minutes, as they lacked quality deliveries into the penalty area.

As Australia settled, France tried their luck with counter-attacks from deep. They searched for either of their two wide forwards within the first two passes of the regain. By this point, Griezmann had moved into the central role, with Mbappe on the right and Dembele on the left.

France’s attacking transitions looked like they would reap some rewards, as the Australian full-backs began to venture forwards themselves. France adapted their transitions with longer balls over their opponents’ defence, who had pushed up with a high line. Despite this change of approach, France struggled to find the clinical final ball that might set free their pacy forwards.

Throughout the second half, France’s wide forwards continued to move inside, forming a trio of central strikers. The main difference from the first half was that they started to move with the ball. They hoped that, by starting in wider positions, they would stretch the Australian back line, pinning back their attacking full-backs in the process. However, each time Dembele or Mbappe drove infield, they found extra Australian bodies, as defensive midfielders Aaron Mooy and Mile Jedinak gradually dropped deeper.

France’s frustrated attack continued as they now looked for their full-backs, who had been patiently waiting for an out ball. With the forward trio occupying the central block, Pavard and Hernandez were in ideal positions to provide first-time crosses. However, the initial passes out to them were sloppy and inaccurate, which forced the pair to take a touch before crossing, thus slowing down the build.

Just as Australia were starting to expand in possession, Les Bleus finally pounced. After a quick regain, Pogba was set free to release Griezmann in on goal. The Atletico Madrid forward was brought down and the referee eventually awarded the penalty via the help of VAR – the World Cup’s first ever VAR penalty. Griezmann comfortably powered home to give the French the lead.

Full of confidence from his first ever World Cup goal, Griezmann started to look much more dangerous in a deeper position. By dropping away from the traffic, he could collect unmarked and freely attack the Australia back line.

Despite a defensive blip from Samuel Umtiti, whose inexplicable handball brought Australia back into the game via a penalty, France had the last laugh. Pogba’s first burst forward ahead of the ball went untracked, as substitute Olivier Giroud flicked the ball forward. The outstretching leg of Pogba was just long enough to dink the ball over the Australian goalkeeper, courtesy of a deflection from Australia left-back Aziz Behich. Ahead once more, France killed the game off with dull possession, ensuring that Australia couldn’t force a final attack on goal.

Australia set up using a 4-2-3-1 structure, both in and out of possession. Aaron Mooy and Mile Jedinak were charged with protecting the back line from the skilful French forwards. Andrew Nabbout was a surprise choice to lead the Australia attack, supported by Celtic midfielder Tom Rogic, who manoeuvred within the number 10 role.

From the opening minutes, it looked as though Australia may have to weather a consistently potent French storm. However, after a steady start, Australia never really looked out of their comfort zone. They were intelligent in possession, not forcing the issue as some teams would on the regain.

With France deploying very attack-minded players in wide areas, Australia’s full-backs progressively moved higher, free of a recovering runner. They looked to build short from Brighton goalkeeper Mat Ryan into the central defenders. Along with Mooy and Jedinak, they created a central box of four around France’s central forward. Ryan’s disguised passing almost made it impossible to predict where Australia would restart.

Their initial build was consistently clean, with minimal interference from pressing attackers. Intelligent movements further afield from left-winger Robbie Kruse pulled French right-back Benjamin Pavard out of position. This enabled Aziz Behich to maraud forward from left-back, and try to find the Australian forwards inside the penalty area. Despite initial first-half progress on their left side, Australia lacked the guile and pace required to genuinely trouble the French back line.

Defensively, Australia maintained a mid-block throughout. They rarely pressed with aggression, looking to shield and cover central areas. This frustrated France, as they in turn threw both full-backs forward to create maximum attacking width. This provided an ideal opportunity for Australia to counter-attack, with the French leaving both flanks relatively unguarded.

With the France front line failing to recover back, both Australia full-backs pushed forward in the second half, overlapping their partnered wingers. Kruse’s movement again dragged Pavard out of his comfort zone, which enabled Nabbout to attack crosses with more space and only one defensive marker. Australia did create more openings in the second half, but nothing of any real purpose as Hugo Lloris remained untested in the French goal.

Australia were eventually rewarded for their endeavours, as a routine free-kick was handled inside the penalty area by central defender Samuel Umtiti. Mile Jedinak stepped up and calmly slotted home, as Australia drew level from the spot. France reacted well and became more dominant after conceding, killing Australia’s forward momentum. With Olivier Giroud introduced, the Australian back line now had an aerial threat to contend with.

With 10 minutes left on the clock, the Australia back line was penetrated, as Paul Pogba charged forward and dinked France back into the lead via a decisive deflection. Australia never had the chance to reply, as the French used all their experience of tournament football.

Australia couldn’t contain any possession in the closing exchanges, as France simply passed the game to its death. It was nonetheless a decent effort from Australia, and they should take confidence from this performance in to their next game against Peru.