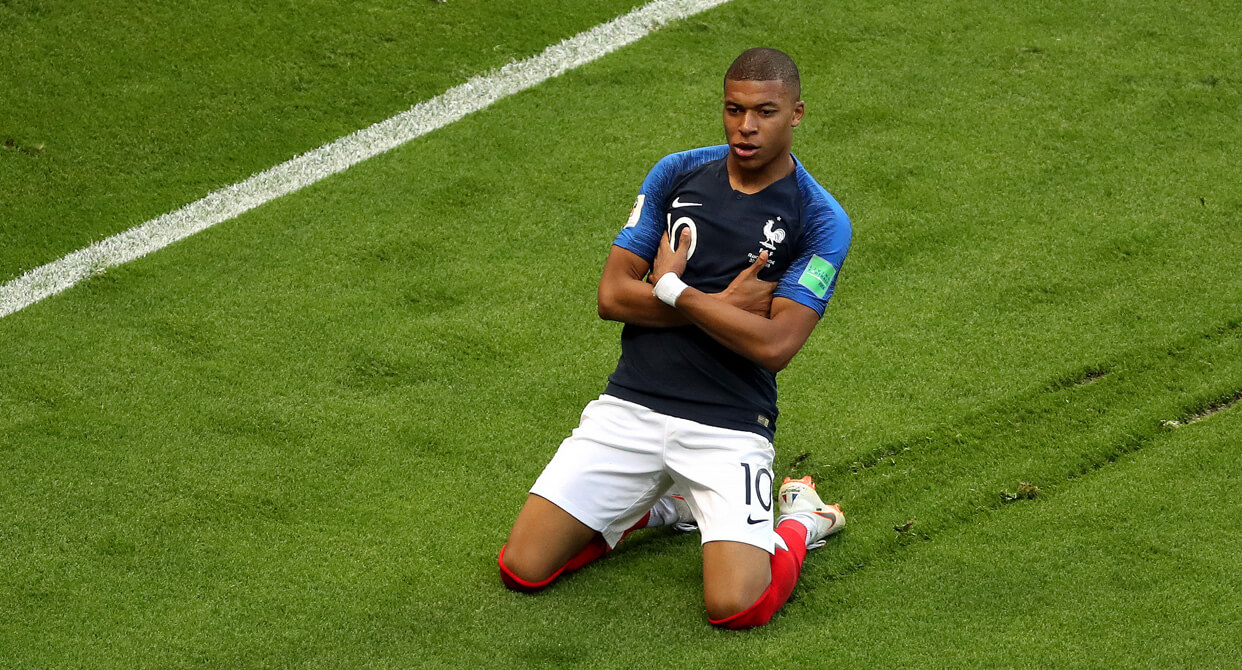 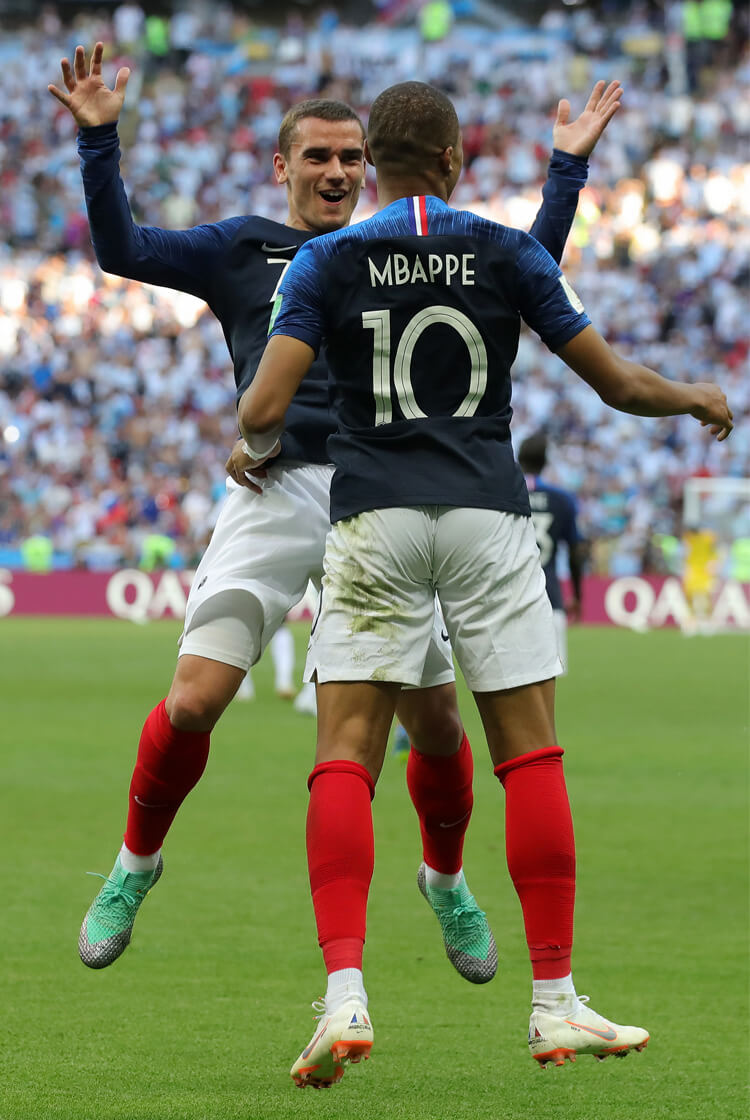 On a day when expectant eyes focused on an all-time great in Lionel Messi, it was 19-year-old Kylian Mbappe who stole the headlines with two excellent finishes in a seven-goal thriller between France and Argentina. In a World Cup encounter that won’t be forgotten in a hurry, a second-half brace from PSG forward Mbappe sealed Les Bleus’ place in the quarter finals and a tie against Uruguay. The teams had gone into the break level after Angel Di Maria’s sublime strike from distance had cancelled out Antoine Griezmann’s opening goal from the penalty spot after Marcos Rojo had brought down a rampaging Mbappe. Argentina took a surprise lead when Gabriel Mercado diverted Messi’s shot past Hugo Lloris shortly after the restart, but Benjamin Pavard equalised with a goal that some might still be watching on repeat and then Mbappe took over. Substitute Sergio Aguero grabbed a late goal to give his team brief hope, but in truth the scoreline ultimately flattered Jorge Sampaoli and his weary players. 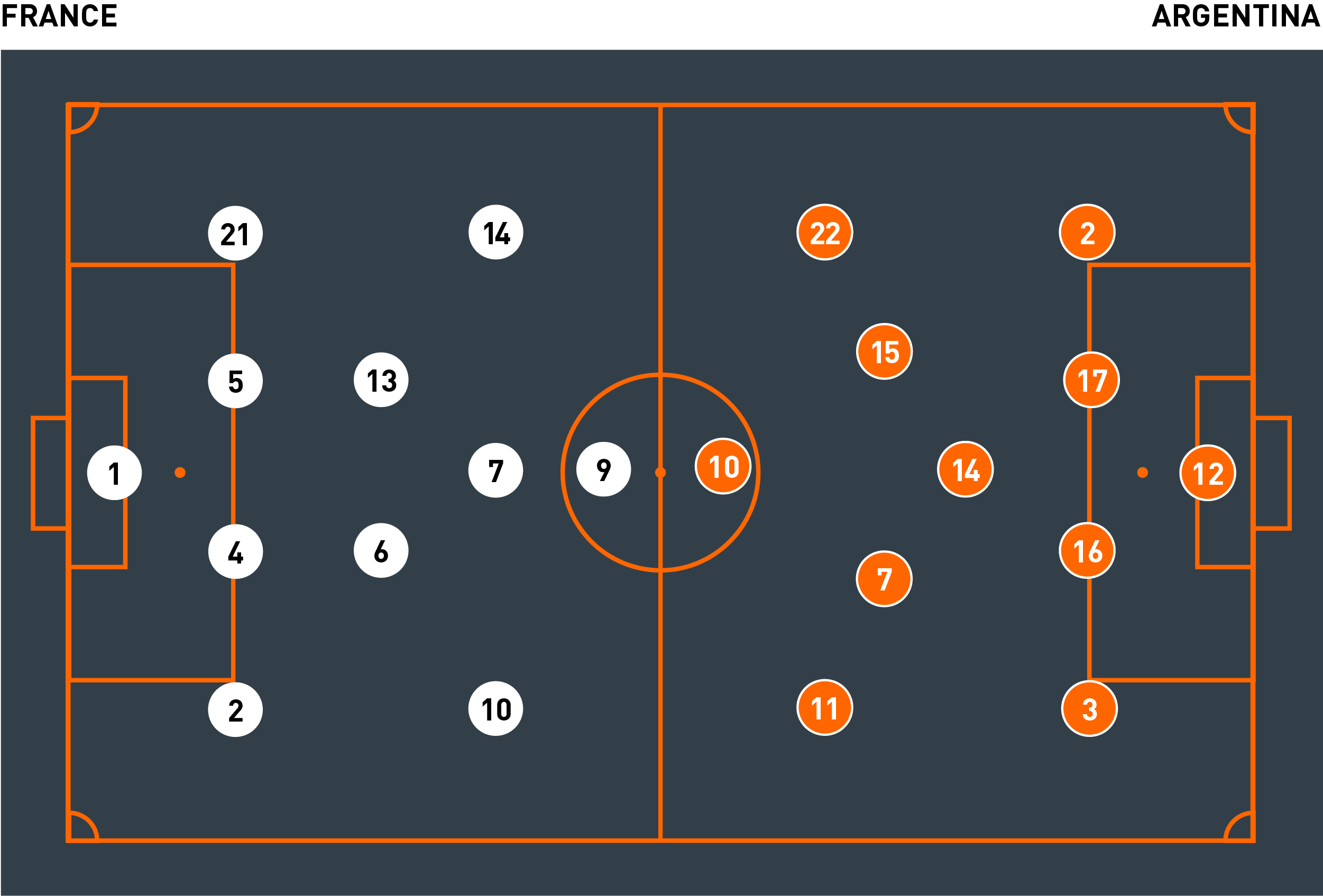 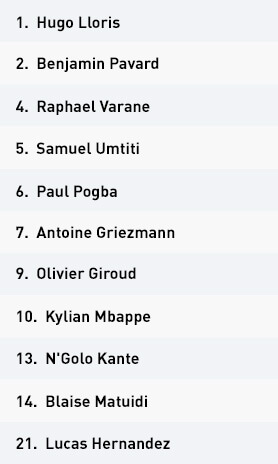 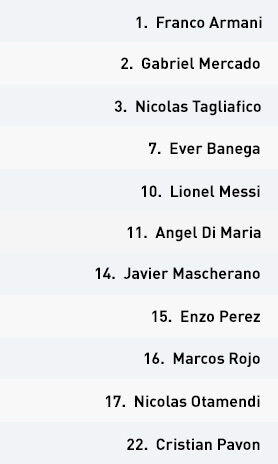 Didier Deschamps made six changes to the team that started the 0-0 bore draw with Denmark, as his France side continued with their 4-2-3-1 formation. Blaise Matuidi returned to the left side of the attacking midfield trio, with his defensive qualities aimed at nullifying the threat of Lionel Messi.

France immediately set up in a defensive mid-block, as they encouraged their opponents’ defence to build short and travel upfield with the ball. The higher the Argentine full-backs moved, the more space they created in behind – and this became the ideal route for Kylian Mbappe to surge forward with runs in behind.

They directed the ball towards Mbappe after each regain, with his directness in possession causing problems in the central lane. After being brought down on the edge of the penalty area, Antoine Griezmann rattled the crossbar with a superb dipping free-kick – a sign of what was to come from the young forward.

As predicted by many, Matuidi’s defensive qualities helped France deal with Messi’s movements out on their left side. With Matuidi dropping deep, Olivier Giroud and Antoine Griezmann also moved across when out of possession. This often formed an asymmetrical 4-3-3 structure, which not only nullified Messi but also provided additional space for Mbappe to attack on the transition.

It was from the penalty spot that France’s opening goal came, as Mbappe was clumsily brought down by Marcos Rojo following a breathtaking run that started from well inside his own half. Antoine Griezmann confidently stepped up to put his side ahead.

Responding to the threat of Mbappe, Argentina started to overload their left side in possession – thus reducing the effect of France’s right-sided attacks. They went into the break with the score level after Angel Di Maria’s sublime effort just before half-time.

Despite going behind courtesy of a deflected effort soon after the restart, France were quickly back in the game. After heavy pressure along their left side – with Lucas Hernandez beginning to move forward in attack from left-back – they equalised. Right-back Benjamin Pavard’s exquisite finish rivalled that of Di Maria’s, as he beautifully struck the ball to find the far corner from distance.

Mbappe’s right-sided impact was minimal in the first period after the restart. France prioritised their attacks along the opposite side, which eventually dragged the Argentina defensive units across. Mbappe therefore moved into the central lane, as France once again reverted into a mid-block. With Argentina prioritising build-up in the channels, central space become vacant for Mbappe to once again utilise his speed.

With Pavard moving forward in attack from right-back, Mbappe could position himself further infield. Not long after Pavard’s equaliser, the teenager restored his side’s lead after quickly shifting the ball away from a compact block of both French and Argentine players, before hitting the back of the net with a swooping left-footed strike. His attacking exploits weren’t over, as he grabbed his second and France’s fourth only four minutes later following a typically modern passage of play, beginning with Hugo Lloris and ending with a clinical finish from Giroud’s cute pass.

Although Sergio Aguero added a third for Argentina late on, France comfortably saw out the win to seal their spot in the quarter finals.

Argentina deployed yet another new structure under Jorge Sampaoli, as Lionel Messi began the match in a lone centre-forward position. With the hope of resurrecting Messi’s club form during his spell as a false nine at Barcelona, Sampaoli chose to leave both Gonzalo Higuain and Sergio Aguero out of the starting line-up.

Despite a steady start, Argentina lacked connection in possession, with clear signs that the majority of the players hadn’t played together in this structure before. Inaccurate passes and poor first touches reduced their attack before it had even begun. As France hit the bar from a free-kick, the warning signs were there that they were struggling to block off France’s access into Kylian Mbappe.

It didn’t take long before Messi chose to focus his movements away from the centre and towards the right inside channel. From here, Argentina effectively built along France’s left side – but now La Albiceleste had no central presence in attack. Both French centre-backs now had no marking to do, and were able to comfortably command their defensive back line.

With Argentina struggling against the pace of Mbappe, their midfield trio mirrored France’s defensive movements and they too began to shift across to nullify the Mbappe threat. France temporarily had no answer in attack, as their transitions became far less potent and frequent.

Argentina clawed their way back into the game, as an increased left-sided presence enabled Angel Di Maria to move ever so slightly infield. In the closing stages of the first half, the former Manchester United winger unleashed a spectacular effort from distance that sailed past the despairing dive of Hugo Lloris.

Within three minutes of the restart, Argentina went ahead. France failed to clear the danger from Ever Banega’s free-kick, and Messi’s shot was fortunately diverted into the goal by right-back Gabriel Mercado. Argentina’s joy didn’t last long, however, as Benjamin Pavard’s superb effort from distance brought France level.

Argentina focused the majority of their second-half attack in the channels – and this left central spaces open for France to exploit on the transition. A distinct lack of quality ensured Messi continued to roam into the channels, as both Argentina full-backs were poor in possession, offering little quality in attack despite their consistently high positions.

As France went ahead through Mbappe’s first, Sampaoli reacted by immediately placing Sergio Aguero into the attack. From here, Messi could permanently attack from the right side, leaving Aguero free to occupy the French central defenders – who up until now had been relative passengers. Despite this change, France soon grabbed a fourth, as Argentina once again looked in disarray in midfield.

A late goal from Aguero created an interesting final few minutes, but in reality it only flattered Argentina, with the French defence remaining resolute. Possibly Messi’s last ever touch in a World Cup and even in an Argentina shirt was fittingly a superb dinked assist for Aguero’s goal. This combination could have sent Argentina into the next round if used earlier, as Messi and Aguero’s seemingly telepathic relationship was seemingly their one positive in possession.