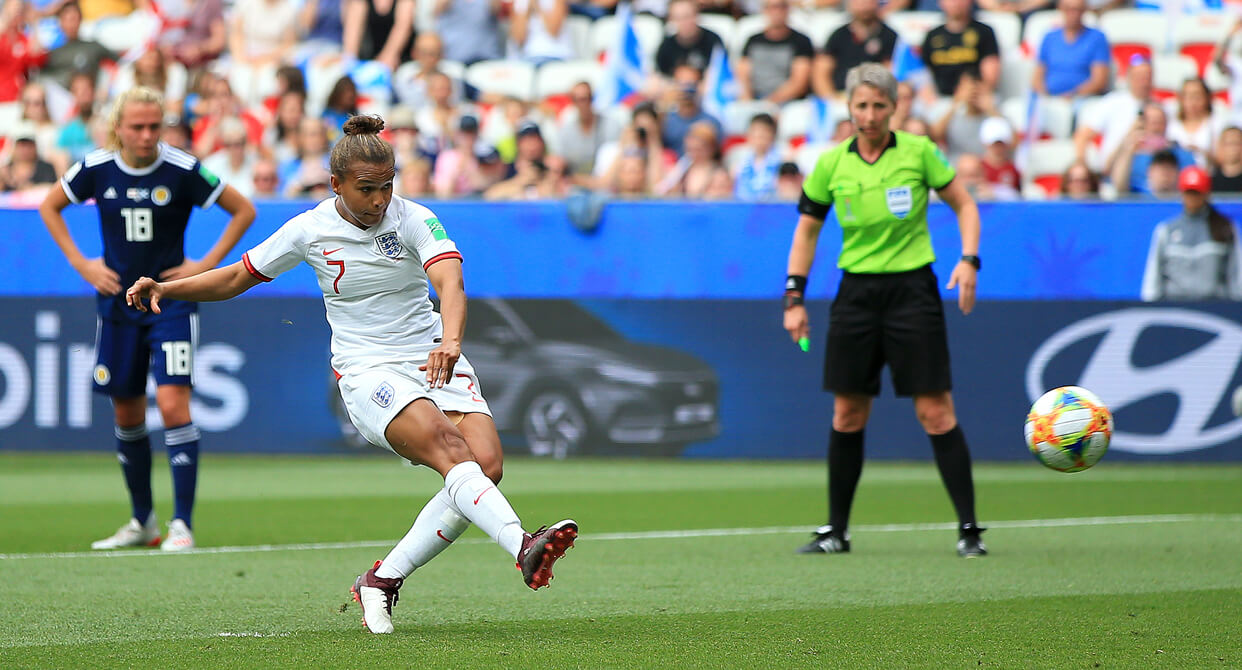 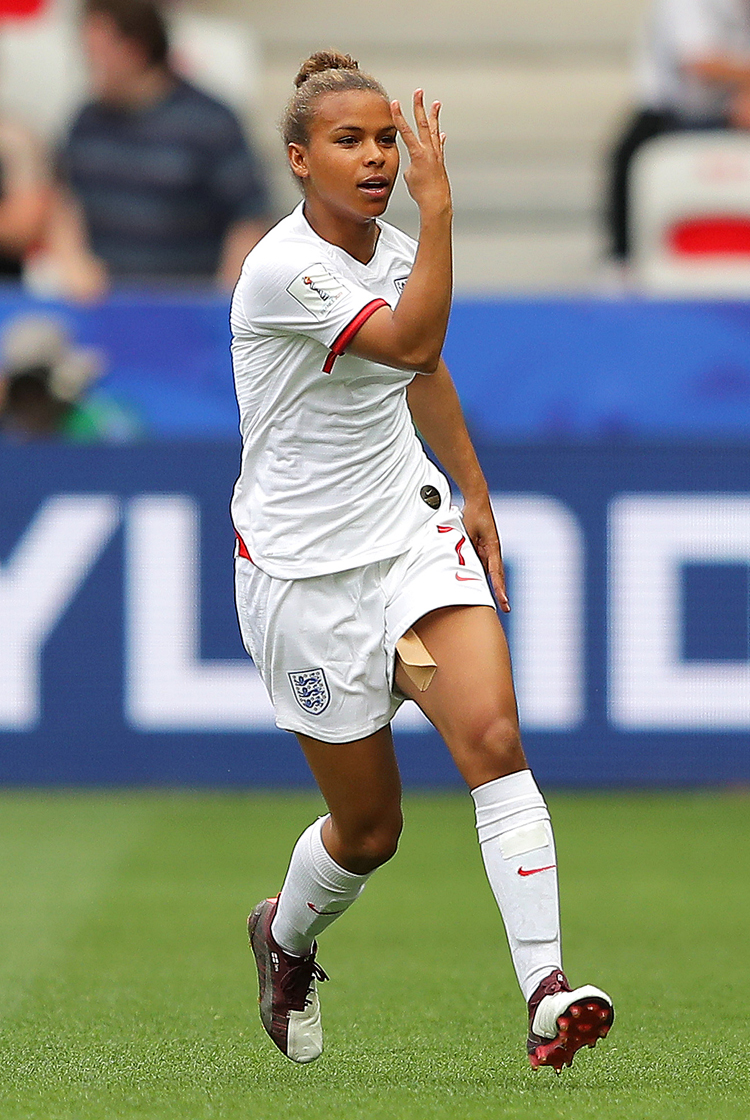 The Lionesses kicked off their 2019 World Cup campaign with a victory over debutants Scotland that ended up being more hard-fought than it might have looked at half-time. Phil Neville’s team took an early lead when yet another VAR-assisted decision led to a penalty for handball against Scotland defender Nicola Docherty; Nikita Parris stepped up to confidently send her spot-kick past the otherwise impressive Lee Alexander. The Scots offered some threat on the break, but looked uncertain in defence and were punished for their failure to clear from an England attack when Ellen White stroked home a second shortly before half-time. A third England goal was ruled out in the opening seconds of the second period, but the group favourites failed to kick on and faced a nervous final 10 minutes when Claire Emslie capitalised on an error from Lionesses captain Steph Houghton to give Scotland hope. England held on, but will want to improve when they face Argentina in their second group game. 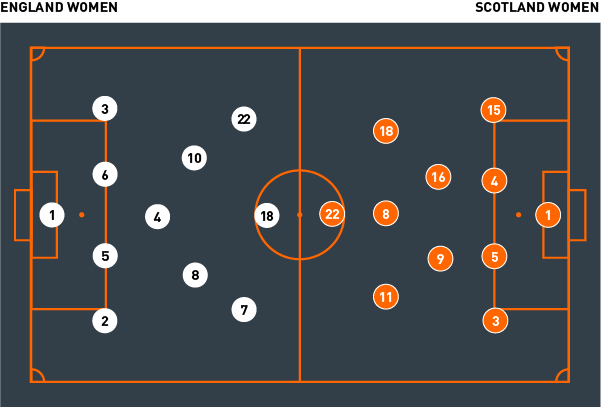 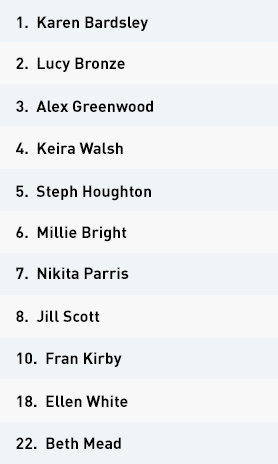 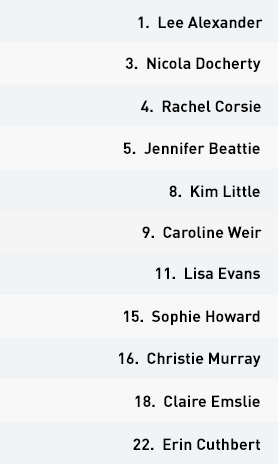 Head coach Phil Neville set England up in a 4-2-3-1 formation that shifted into a 4-3-3 in possession, with Keira Walsh acting as the deep-lying central midfielder behind Jill Scott and Fran Kirby. Ellen White started as the central striker, supported from wide areas by Beth Mead on the left and Nikita Parris on the right.

Scotland pressed high from the start, however, and with number 10 Kim Little tasked with affecting Walsh, England found it difficult to play through their chosen route in midfield. They still dominated possession, though, and were able to create opportunities by playing around the Scotland block. Centre-backs Millie Bright and Steph Houghton were both able to find their full-backs in space – most notably on their right, where Lucy Bronze and wide attacker Nikita Parris regularly rotated to excellent effect.

Should the Scotland defence prove compact enough to thwart England attacks on one flank, Neville’s team looked to regular switches of play through the back line in an attempt to exploit any space on the far side – it was through one such switch that Bronze drove into the Scotland box in the passage of play that led to White scoring England’s second goal late in the first half.

In central areas, England looked to the movement of their attacking midfield players – particularly Jill Scott – to create space for White to receive. Scott’s consistent runs into ball-side spaces between Scotland centre-backs and full-backs worked to drag the midfield screen out of position, freeing up space for White and Kirby to combine and create good attacking opportunities.

In the second half, Scotland dropped into more of a 4-5-1 shape off the ball and pressed with less intensity – this gave Walsh in particular more time and space to influence the game from her role in central midfield, although the team as a whole created fewer chances.

Defensively, England set up in a 4-1-4-1 shape and looked to press high in the opposition half. This shifted into a 4-4-1-1 formation when defending in their own half, with Kirby playing behind White on the top line. This shape allowed them to frustrate Scotland’s build-up play through the thirds, with the midfielders able to press their opponents man on man. Despite Scotland improving after the break, it was from an in-possession error that England conceded with just over 10 minutes remaining – but they held on for an opening win and an important three points.

For her nation’s first ever Women’s World Cup fixture, Scotland head coach Shelley Kerr set up in a 4-2-3-1 formation that looked to bring Kim Little into play as much as possible in the number 10 role. The Arsenal midfielder worked tirelessly to find spaces between the England back line and midfield units, looking to operate mostly in the half-spaces and wide areas.

Despite this, the Scots struggled to retain possession in the first half, giving the ball away too cheaply. They did pose a threat on the counter-attack, however, with lone forward Erin Cuthbert playing on the outside shoulder of the England centre-backs and chasing down direct balls on transitions. The strength of the Scottish press enabled them to slow the England build-up and force interceptions in central areas, one of which led to their best chance of the opening period – unfortunately, Cuthbert shot over from the edge of the box at 1-0 down.

England’s defensive overloads in the first hour of the game limited Scotland’s attempts to attack in wide areas. As the Lionesses’ pressing intensity reduced in the final half-hour, however, the Scots enjoyed more success – in particular on their right, where Claire Emslie posed an increasing threat. The 25-year-old, who plays for Orlando Pride in the United States, eventually took advantage of the space between England left-back Alex Greenwood and replacement centre-back Abbie McManus to reduce the deficit to 2-1 late in the second half.

Out of possession, the Scots set up in a 4-4-1-1 shape that eventually dropped into a 4-5-1 in the second half. Cuthbert and Little started as the two highest players; the former was tasked with marking both centre-backs and forcing play to one side, while the latter was responsible for limiting England’s build through playmaker Keira Walsh. While this worked to protect the central lane throughout the first half, it allowed England time and space to build in wide areas – from where both of the group favourites’ goals originated.