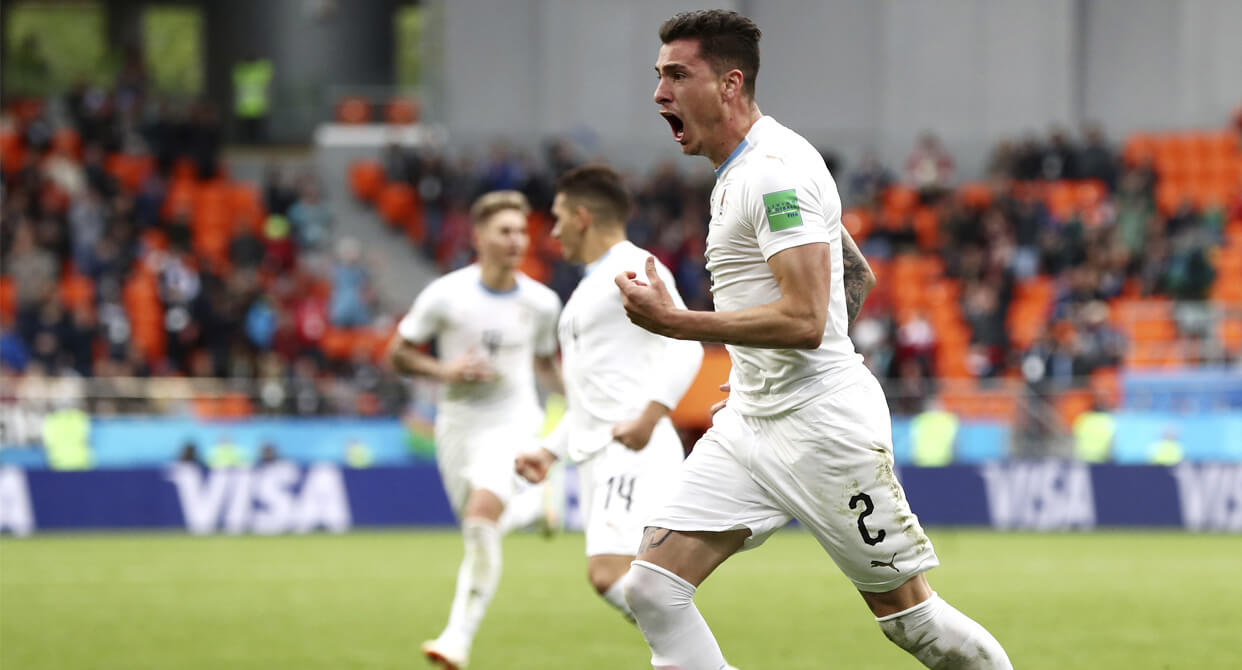 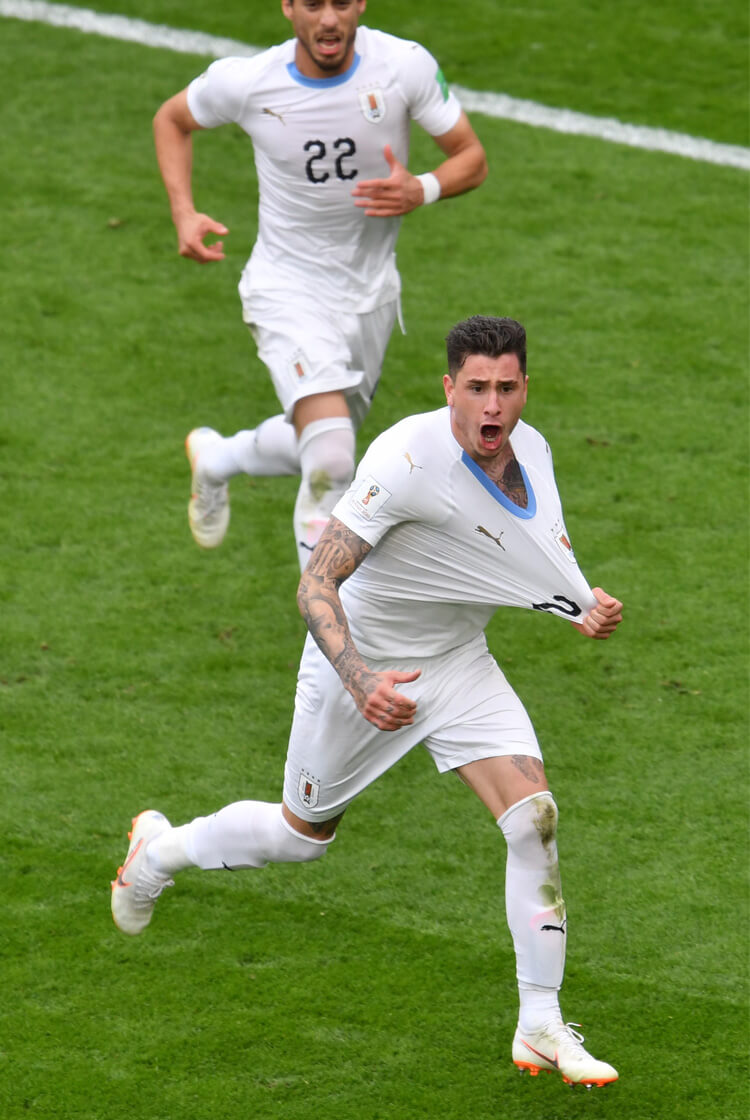 Jose Gimenez got Uruguay off to a winning start in their opening World Cup Group A game against Egypt with a 90th-minute header at the Ekaterinburg Arena in Yekaterinburg. Mo Salah was an unused substitute as he continued his recovery from the shoulder injury that forced him off in Liverpool's defeat to Real Madrid in the Champions League final – and his absence was sorely felt as his team succumbed late. Here, our professional coaches analyse the tactics and key moments from Uruguay's victory – and assess what went wrong for Hector Cuper and Egypt. 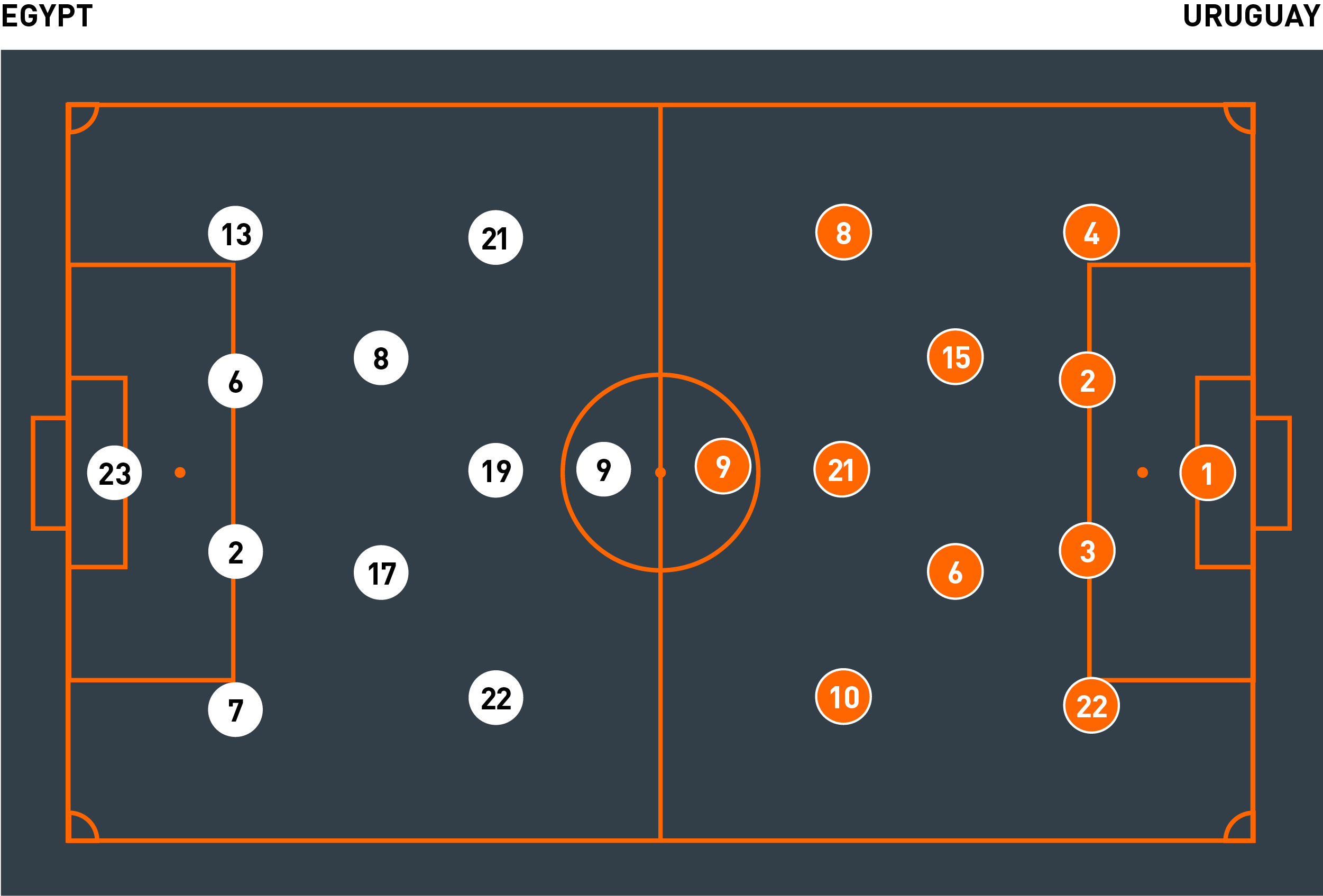 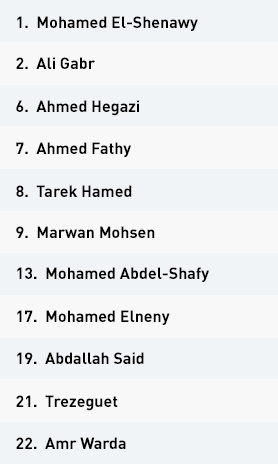 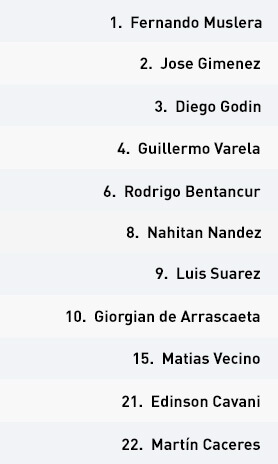 Egypt set up in a conventional 4-2-3-1 formation with Mohamed Elneny and Tarek Hamed staying close together in and out of possession as the deep central midfielders. Amr Warda, Abdallah Said and Trezeguet supported Marwan Mohsen in attack.

Egypt were cautious in possession and very reluctant to commit numbers forward in fear of being hit by a Uruguay counter-attack. Only one full-back at a time would join in the attack, leaving three defenders and the two deep central midfielders behind. These would operate either on the ball or behind but never in front, unless the centre-backs had possession.

The only real method of attack for Egypt was on the break, but their rigid defensive structure encouraged Uruguay to commit more numbers forward, making the counter a real possibility. This tactic created a couple of chances but nothing particularly clear-cut.

The attacking changes that Egypt made (Kahraba for Mohsen and Ramadan Sobhi for Warda) did little to alter their strategy, as they looked bereft of ideas when in possession. Their only other plan was to attempt to create from crosses from deep, wide positions – but these deliveries didn’t trouble Uruguay's defence.

Out of possession, Egypt showed a little more quality. They would set up in a 4-1-4-1 formation or a 4-4-2 formation – and the differences between the two were key.

During the 4-1-4-1 phases, they completely nullified Uruguay’s threat in central areas and their ability to play between the lines. This frustrated Oscar Tabarez’s team and provided great security to their own goal.

In the 4-4-2 phases, there were more gaps, most notably between the defensive and midfield lines. Uruguay would look to try and exploit these, which they did on several occasions.

It would tend to be Hamed who would drop from the midfield unit to the holding position and Said would take his place, leaving Mohsen to lead the first line alone. When Said either joined Mohsen in pressing as a two or chose not to recover, Hamed had to join Elneny in the midfield line or the space would have been too big for one player to cover.

Approaching the final few minutes of the contest, Egypt had been successful in thwarting the threat of Uruguay’s world-class forwards. They will have been devastated that a poorly defended set-piece in the last minute was the difference.

Uruguay set up in a 4-2-3-1, with Matias Vecino and Rodrigo Bentancur as the two deep central midfielders. Nahitan Nandez and Giorgian de Arrascoeta operated as the wingers, and either Edinson Cavani or Luis Suarez would drop off the top line into the number 10 position on a rotational basis.

Uruguay were cautious in possession to begin with, as their two holding midfielders positioned themselves in front of the first line of Egypt’s mid-block. This left Uruguay with often four or five players and the goalkeeper in front of their opponents’ entire team. The knock-on effect of this was that there were fewer players between and beyond the lines of the block available to cause problems, and they were heavily outnumbered.

Uruguay tended to threaten more when they played the ball forwards early in transition – before Egypt had a chance to settle into their compact units and deny them space. Unfortunately, with Egypt’s cautious nature in possession, these opportunities were few and far between. They therefore had to be patient in their build-up play.

When playing horizontally, Uruguay passed the ball too slowly. This was insufficient to remove layers of the Egypt block and create space to penetrate, while the distances between Uruguay’s players was too small.

These distances were crucial for a number of reasons. Uruguay’s players needed to be far away enough from one another that, when moving the ball, the opposition unit had to travel further, thus increasing the likelihood of gaps appearing. But, at the same time, they needed to be close enough to attract an initial press to remove layers from the block, while also being able to initiate an immediate counte-press should they lose possession.

They didn’t carry out this strategy effectively enough, and there was little improvement as the game went on. It was only through a set-piece opportunity that they were able to get their winning goal.

Uruguay were nonetheless very comfortable out of possession. The South Americans operated in a 4-4-2, which was an easy transition from 4-2-3-1. Cavani and Suarez led the attack while Nandez and de Arrascaeta dropped in to form a midfield block of four with Vecino and Bentancur.

With this, Uruguay would try to force Egypt into the wide areas, where the nearside striker and wide midfielder would look to close the space and limit the options while showing the Egypt player towards the touchline.

As Egypt were wary of committing too many players forward, Uruguay were rarely threatened. The strong centre-back partnership of Diego Godin and Jose Gimenez had little to worry about, as the central areas were always protected when Uruguay set up in their 4-4-2 shape, and the lack of runners forward meant the defensive pair weren’t often forced out of position.