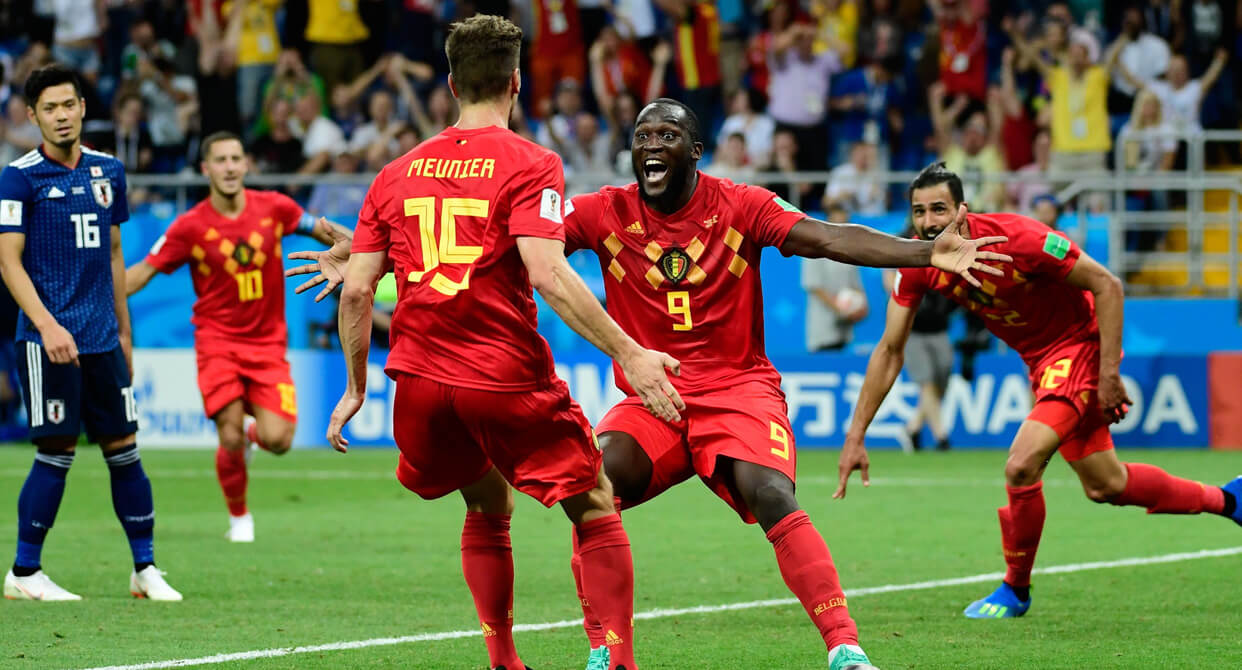 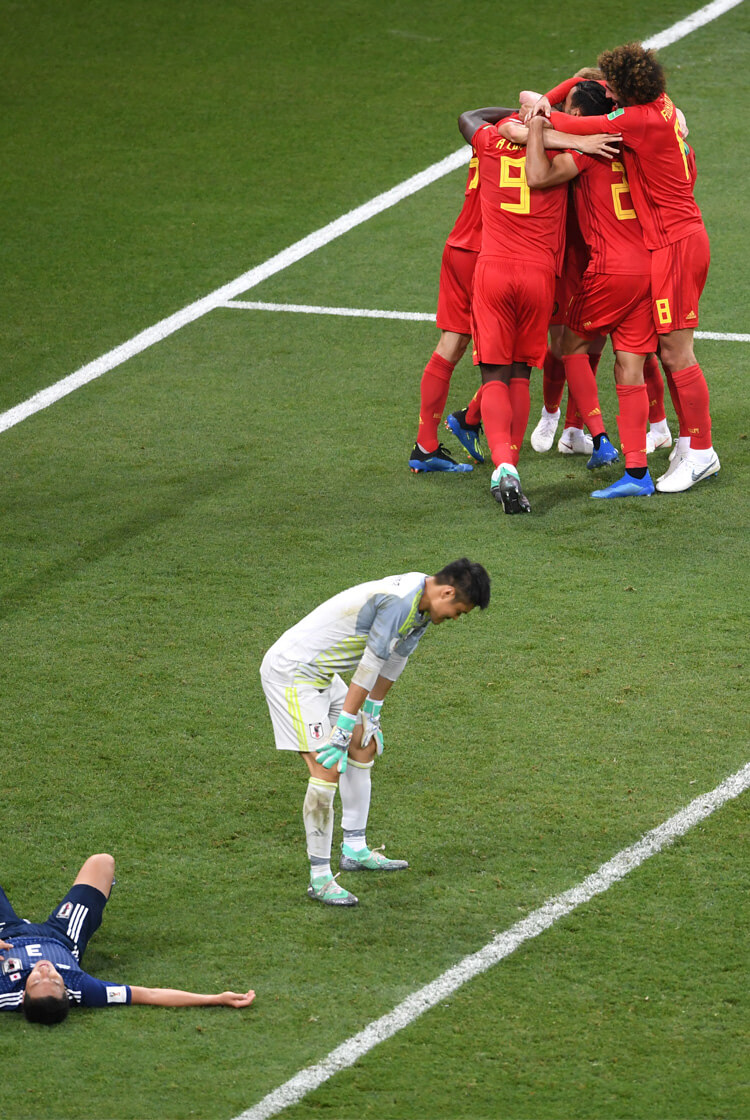 Belgium completed one the great World Cup comebacks, coming from two goals down to beat Japan 3-2 with the final kick of the game in this last-16 tie in Rostov-on-Don. After a goalless opening half, the tie sprung to life in the second period, with Genki Haraguchi and Takashi Inui putting daylight between themselves and Belgium within seven minutes of the restart. But a double substitution from Roberto Martinez, with West Bromwich Albion’s Nacer Chadli and Manchester United’s Marouane Fellaini introduced, proved an inspired call from the head coach. Tottenham Hotspur defender Jan Vertonghen headed home from a seemingly impossible angle to get them back in the game, and then Fellaini drew Belgium level by powerfully heading home an Eden Hazard cross. Extra-time was looming, but a blistering counter-attack with just 30 seconds of the contest remaining, featuring Kevin De Bruyne, Thomas Meunier and a glorious leave from Romelu Lukaku, ended with Chadli tapping home from close range to devastate an exhausted Japan side. Awaiting Belgium in the quarter finals are pre-tournament favourites Brazil, with the pair to meet on Friday night in Kazan. 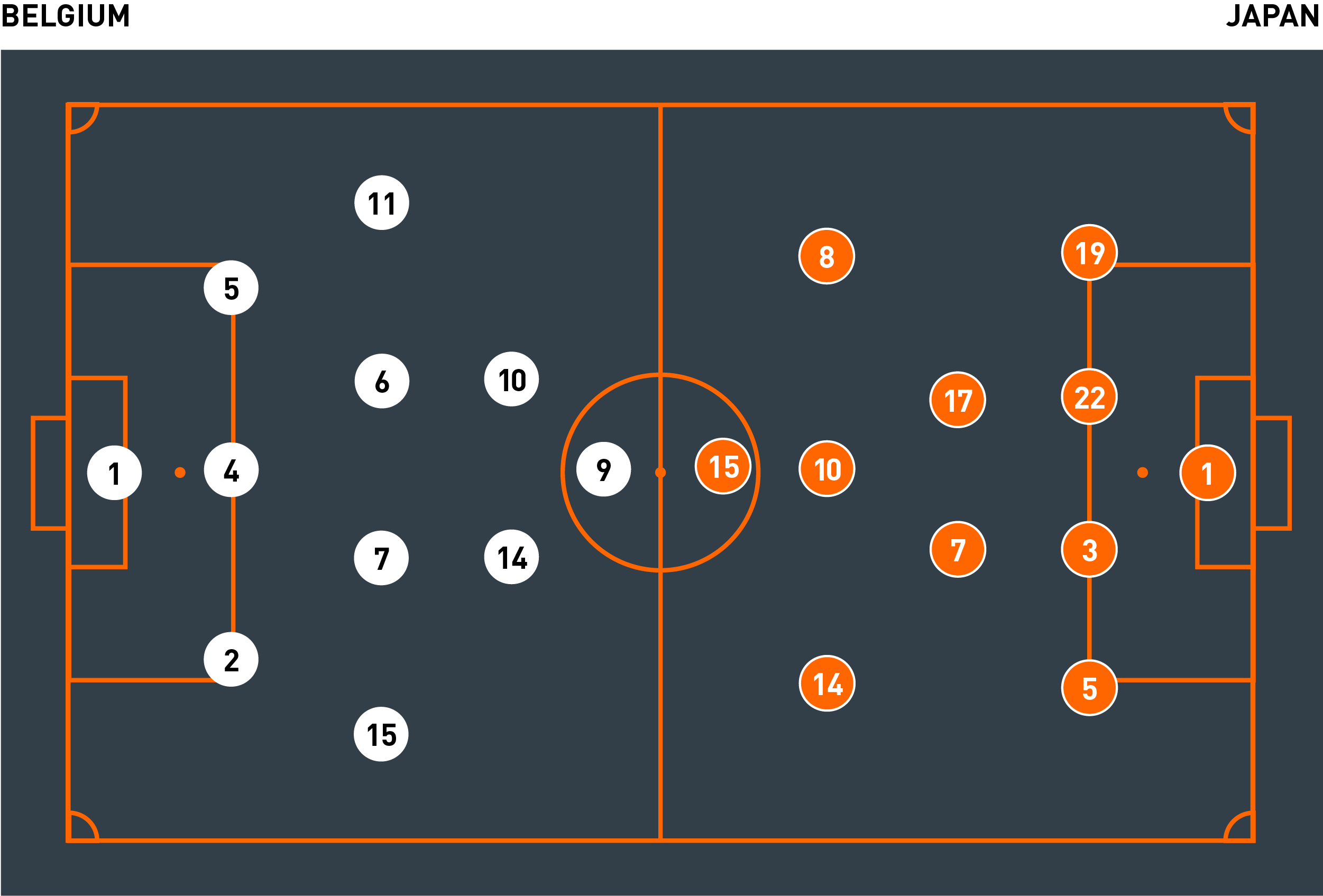 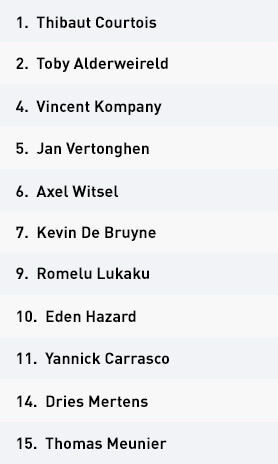 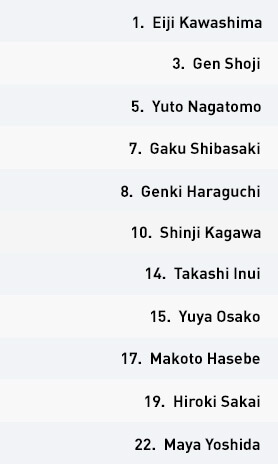 After making a number of changes in their final game of Group G – a narrow win over England – Belgium’s strongest starting line-up returned to action for their last-16 tie against Japan. Having topped their group with three wins from three, the Red Devils set out to start on the front foot, hoping to dominate the ball as their defensive back three expanded in possession.

Japan, though, began with a surprisingly high-pressing approach, harrying the Belgium back line into playing longer balls towards lone striker Romelu Lukaku. They initially struggled to maintain effective periods of early possession as a result, with their opponents’ midfield tirelessly pressing the ball carrier and blocking forward options with curved pressing movements.

With his access to the ball limited, Eden Hazard’s increasing frustration forced him to drop deeper. Japan’s narrow 4-2-3-1 structure did provide Belgium early access into their wing-backs, who both provided maximum attacking width, but there seemed to be a reluctance to attack with direct play and crosses into Lukaku, despite the forward having clear aerial superiority over the central defenders.

Axel Witsel accompanied Kevin De Bruyne in central midfield, but during the build Witsel would leave the central lane and move much deeper. The 29-year-old effectively became part of the back line, which afforded De Bruyne more space to roam against a Japanese midfield aggressively man-marking him.

Belgium’s lack of a central midfield presence enabled the Red Devils to continue building in the channels, as their wing-backs gradually moved higher. However, with Dries Mertens and Hazard both remaining in the inside channels – often deeper and thus behind the wing-backs – both failed to actively provide fluid attacking combinations in the final third.

Belgium had to weather heavy pressure from Japan for a spell, and despite briefly converting into a low block, they were failing to manage their switch of play. Mertens and Hazard remained narrow, as both wing-backs recovered back to form a defensive back line of five. Japan therefore looked to build using switches, avoiding the congested central lane to create two-on-one situations against Belgium’s wing-backs. Despite initial progress, the Belgium back line remained solid and comfortably dealt with crosses into the penalty area.

Belgium’s best chances of the first half came from Japanese errors in midfield rather than inventive attacking play. This continued into the early parts of the second half, but it was Japan who took the lead with a flowing counter-attack goal. This was quickly followed by another finish, as Takashi Inui’s superbly struck effort from 25 yards arrowed into the bottom corner to double Japan’s lead.

Belgium were now trailing for the first time in the tournament, and there were signs of disapproval with the team structure. Witsel and De Bruyne’s frustration grew against an extremely narrow Japanese midfield. With Belgium not utilising the crossing potential from either wing-back, their central play became predictable and Japan were happy to congest the central lane.

Martinez eventually shifted his set-up, with Marouane Fellaini and Nacer Chadli introduced midway through the second half. Fellaini naturally provided an additional aerial presence in attack, as well as another body in central midfield. This released De Bruyne further up the the pitch, both with and without the ball. From here, the Manchester City playmaker could link up with Hazard and create numerical overloads along the left inside channel.

Belgium’s directness was immediately noticeable after the tactical substitution. They soon grabbed one goal back, as Jan Vertonghen fortuitously headed in from an almost impossible angle. A second direct period of play, during which Belgium had finally started to send crosses into an unsettled central defence, ended with Fellaini heading home from close range.

With only seconds of the game remaining, a lightning counter-attack – which started from a Japan corner – completed their comeback. Chadli finished off the move after Lukaku had expertly set up the chance with a perfectly timed dummy in the box.

Japan set up in a 4-2-3-1 structure and surprised many by taking an aggressive high-pressing approach. Coupled with a very high defensive back line, they squeezed Belgium into their own half with a strategy that seemed to catch their opponents off guard.

When in possession and while Belgium’s attacking trio remained narrow when defending, they made use of their full-backs, initially from deeper positions. Both full-backs utilised diagonal forward passes into the feet of Shinji Kagawa, in the central number 10 position, and lone forward Yuya Osako. With Belgium setting up with only two central midfielders, central access was relatively open for Japan, as they began to compile lengthy periods of possession.

However, they struggled throughout to penetrate the final defensive line, lacking runs in behind and, most importantly, disguise in possession. The majority of their attacking combinations, although fast, were largely predictable against an experienced central defensive unit.

Japan’s full-backs continued to overlap, and Belgium’s wing-backs struggled to deal with the two-on-one situations they were creating. But despite all their progress in possession, they failed to test Thibaut Courtois in the first half. Their tempo drastically reduced as half-time approached, with it seeming as though they were content to go in 0-0 at the break.

They continued with a seemingly reduced tempo in the opening exchanges of the second half, and were happy to decrease the intensity of their high press, dropping into a congested mid-block. But although they initially reduced their pressure on the Belgian back line, they exploded back into life as soon as the ball entered the midfield third.

Soon after the restart, they took the lead with a wonderfully incisive breakaway. Gaku Shibasaki’s slicing through ball was missed by the stretching legs of Vertonghen, as Genki Haraguchi surged forward. A nimble body feint moved Courtois ever so slightly across to his left, allowing Haraguchi to fire the ball back across and into the opposite corner.

Remarkably, Japan doubled their lead less than five minutes later. Kagawa latched on to a loose second ball before setting it off to Inui, who launched a devastating low rocket into the bottom corner from 25 yards. Belgium’s confidence had clearly been hurt, with Japan’s central play once again causing problems. Their midfield remained comfortable in possession under pressure, strategically keeping hold of the ball to reduce the threat of an immediate attacking response.

It was only tactical changes that saw the Red Devils begin to threaten Japan’s back line, as Roberto Martinez introduced Marouane Fellaini and Nacer Chadli – who would both get on the scoresheet. Sensing more attacking intent, Japan again reduced their pressing intensity, dropping into a mid/low defensive block.

With Belgium adding an extra central midfielder to their system, Japan’s counter-attacks became less frequent and less effective. A reduction of spaces combined with an increase in numbers within Belgium’s central lane halted any progress during transitional moments.

As Belgium grabbed two goals from direct play to draw proceedings level, it became clear that Japan’s defence was struggling to contain the direct approach. They forced a corner with seconds remaining, but rather than run down the clock they decided to fire the ball into the Belgium penalty area.

Courtois comfortably claimed the delivery and sent his pacy front line on its way up the pitch. Within the blink of an eye, the ball landed at the feet of Chadli, who tapped home a winner with the final kick of the game.