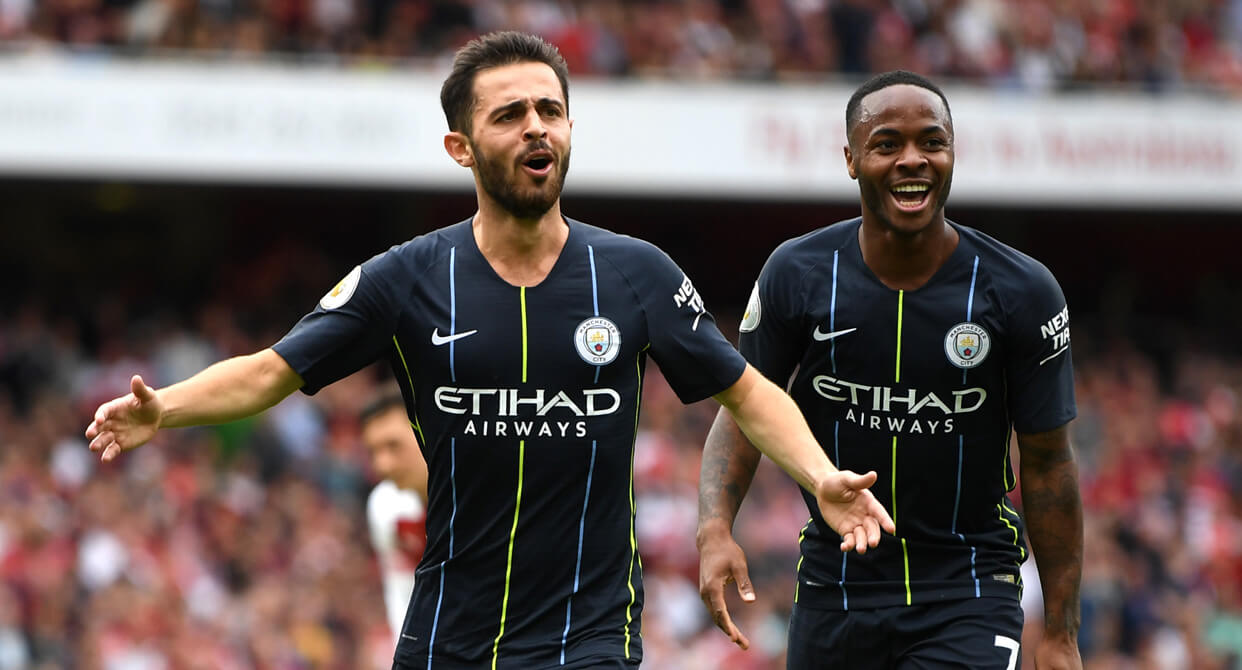 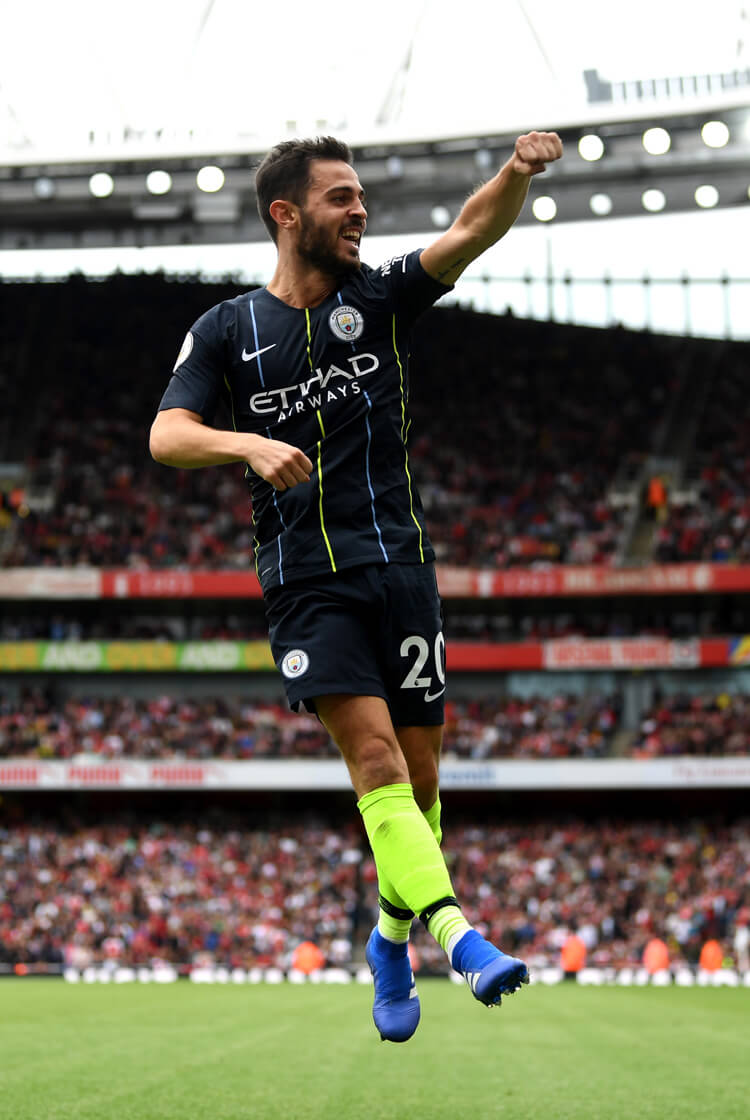 Pep Guardiola spoiled the Premier League debut of Unai Emery in the Emirates dugout, as his Manchester City team eased to victory over a new-look Arsenal side in north London. It was far from the slick performance so often seen throughout their title-winning 2017/18 campaign, but City were rarely troubled by the Gunners in an assured display. Raheem Sterling put the visitors ahead with little under a quarter of an hour on the clock, passing two Arsenal players before firing the ball home from the edge of the box. Goalkeeper Ederson was largely untested despite the Gunners enjoying periods of bright play, and City wrapped up the victory by doubling their lead in the second half. Benjamin Mendy cut the ball back to Bernardo Silva in the box, who hit the back of the net with an exquisite first-time left-footed strike. Arsenal will take some time to settle in a new system, but they will face few sterner tests than this all season. 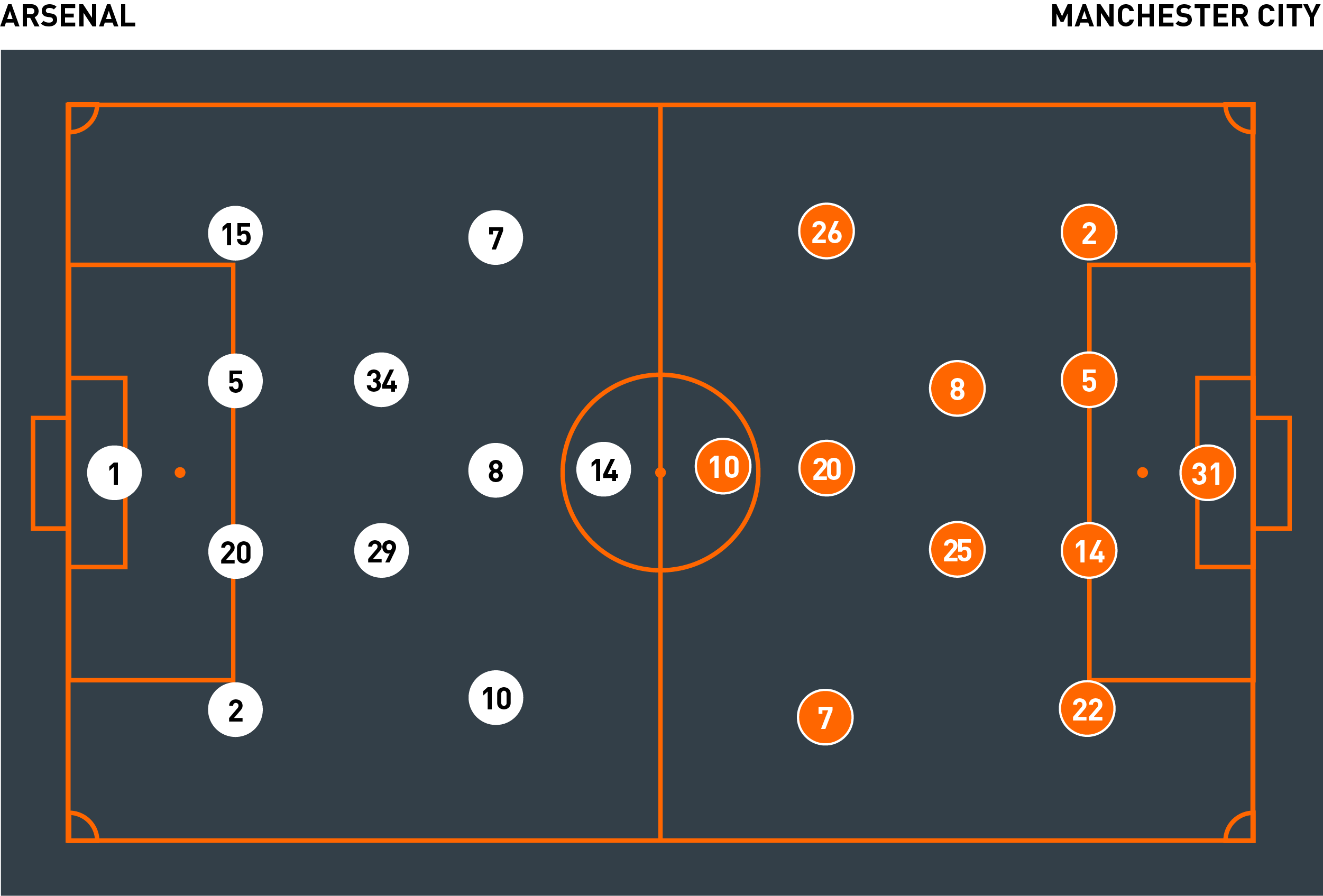 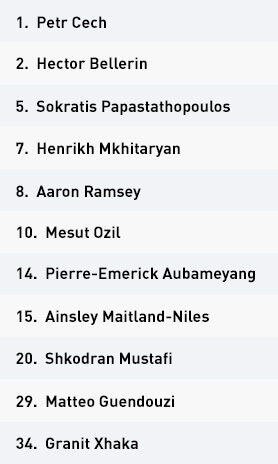 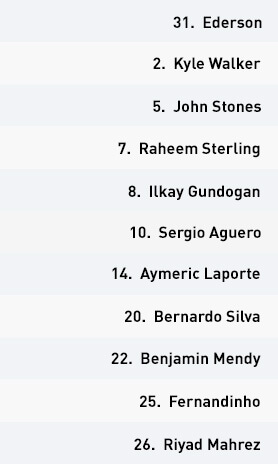 In their first Premier League fixture since the departure of Arsene Wenger, Arsenal started in a 4-2-3-1 structure under new head coach Unai Emery. Summer recruit Matteo Guendouzi was a surprise selection in central midfield, as the teenager made his debut alongside Granit Xhaka in a two-man defensive midfield block.

The Gunners favoured a short build, looking to play expansively when goalkeeper Petr Cech restarted play. They looked comfortable in possession in the opening exchanges, with Xhaka and Guendouzi collectively dropping between the two centre-backs to create a four-on-three overload against Manchester City’s forward line. Despite a new identity clearly in the works, Arsenal were far more effective and productive when sending long balls forward in the channels for lone striker Pierre-Emerick Aubameyang to chase against a high defensive line.

After frequent short restarts from Cech, Pep Guardiola’s City team changed their pressing approach, allowing Arsenal to build short and travel out with the ball. City’s back line then squeezed high, condensing the distance between their forwards and defence. Arsenal lacked the quality and rotations to play through such a compact unit, and the away side often recovered first-half possession using this strategy.

As City began to dominate possession, Arsenal’s search for any form of sustained possession became desperate. They resorted to needless and often ineffective passes back to Cech, but with the back line failing to drop into receiving positions quickly enough, the goalkeeper lacked consistent short passing options. Cech, looking increasingly uncomfortable, could provide little more than aimless long balls forward for City’s back line to recover with ease.

Persistent overlaps and underlaps from Manchester City left-back Benjamin Mendy forced Mesut Ozil into deep defensive work, but this eventually affected his performance with the ball. Repeated recovery runs drained the German, as once he moved into the final third his lack of energy resulted in uncharacteristic poor touches and loose passes. His lack of attacking input continued well into the second half.

Arsenal continued to force long balls forward after the break, but City’s back line was comfortable in nullifying any potential threat. John Stones in particular was magnificent in the air; his all-round defensive performance kept the Arsenal attack at bay.

Nonetheless, the introduction of Alexandre Lacazette for Aaron Ramsey created a more potent front three. Ozil returned to his more familiar number 10 role, with Aubameyang moving wide left. Arsenal subsequently created a number of second-half chances, as Mendy moved inside as a false full-back, leaving the away side to defend three-on-three situations. Despite both Lacazette and Aubameyang working shots on goal, neither could really test Ederson.

Lacazette’s cameo proved he is a far more efficient number nine than Aubameyang. His ability to hold up play and link with runners, plus his all-round battling ability, helped Arsenal recover a high proportion of long balls forward. Ozil then had more time and space to dictate play, as Lacazette prefers to move away from the ball, which in turn drew defenders away from the playmaker.

Lucas Torreira’s brief appearance also highlighted his attributes with the ball. One superb splitting pass set Aubameyang on his way to finish on goal, but he was called offside. In the end, the reigning champions just had too much for this new-look Arsenal side.

Head coach Pep Guardiola made three changes from his team’s Community Shield victory over Chelsea, as Ilkay Gundogan, Raheem Sterling and Ederson were reinstated to the defending champions’ starting line-up.

Manchester City overloaded Arsenal’s young left-back Ainsley Maitland-Niles throughout the first half, as Kyle Walker’s overlaps often went untracked by Arsenal’s midfield. With the visitors building short from goalkeeper Ederson, Henrikh Mkhitaryan moved higher, forcing early pressure on the deep receiving City defence. But once they had penetrated Arsenal’s high press, Maitland-Niles lacked a second supporting player to defend their left channel. City made constant progress on this side, and worked the ball well into the penalty area on a number of occasions.

In order to utilise this right-sided overload further, lone forward Sergio Aguero frequently moved deeper and across to the right inside channel, adding a third defensive problem to Maitland-Niles’ growing list. The young full-back couldn't leave Aguero free to receive, so occupied ‘half and half’ positions between Aguero and Riyad Mahrez. City could gain ground deep into the Arsenal half as a result, and still attack Maitland-Niles in isolated one-on-one situations.

City continued to build from goalkeeper Ederson, but at times their play looked uncharacteristically unco-ordinated. Arsenal intelligently varied the number of pressing players and their intensity, forcing City to adapt each time they attempted the build. A poor selection of passes from Ederson helped set the tone for City’s first-half build.

Their most effective play came after regaining the ball within midfield and quickly penetrating forwards. With Guardiola’s midfield typically in close proximity to one another, each time they lost possession, they were well positioned to collectively counter-press and thus regain the ball. They did this just as Arsenal expanded after a regain, while the hosts desperately searched for some sustained possession. However, with City far superior during transitional moments, they broke forward and created additional chances on the counter-attack. Excellent one-twos and quick combinations from summer acquisition Riyad Mahrez proved an ideal weapon on the break.

City deservedly took the lead with little under a quarter of an hour played. Mahrez’s cross was only half-cleared to Mendy on the edge of the penalty area, and the full-back laid the ball off to Sterling, who created just enough space to cut inside and unleash a low drive past an unsighted Cech.

The visitors intelligently rotated the role of the right-sided winger, with Bernardo Silva, Mahrez and Sterling each spending time as the wide right attacker. They were rarely without a free man within that area of the pitch. They continued to advance down the right channel following the withdrawal of Maitland-Niles through injury, with Walker enjoying similar success against Stephan Lichtsteiner. These overlaps enabled Mahrez in particular to cut back inside on to his stronger left foot and attack inside the new Arsenal left-back.

City’s second-half performance with the ball had much less fluidity about it, however. It was noticeable that Mahrez and Mendy, who has returned from a serious knee injury, aren’t yet up to speed with Guardiola’s positional play. Both were too forceful in possession, when the set-up of the team was to sustain possession. This resulted in unnecessary turnovers of possession.

Mendy’s lack of spatial awareness was also evident, as he moved into Guardiola’s preferred false full-back role. This often put City under additional pressure. The France international’s qualities on the transition, however, were crucial in City winning the game. His ability to surge forward with the ball gave his defence time to recover, and pushed his attacking teammates forward. After a quick combination with Sterling, Mendy cut the ball back for Bernardo Silva to power the ball home.

City finished by maintaining possession, as the welcome introduction of Kevin De Bruyne helped settle the contest. Ederson’s pass around the 67th minute – already a potential contender for pass of the season – was a particular highlight, and set the tone for a period of possessional dominance to kill the game. In the final 10 minutes, the fresh legs of Gabriel Jesus ensured they had the energy to chase down loose balls and draw fouls high up the pitch. City comfortably held out until the final whistle, claiming their first clean sheet and three points of the new campaign.