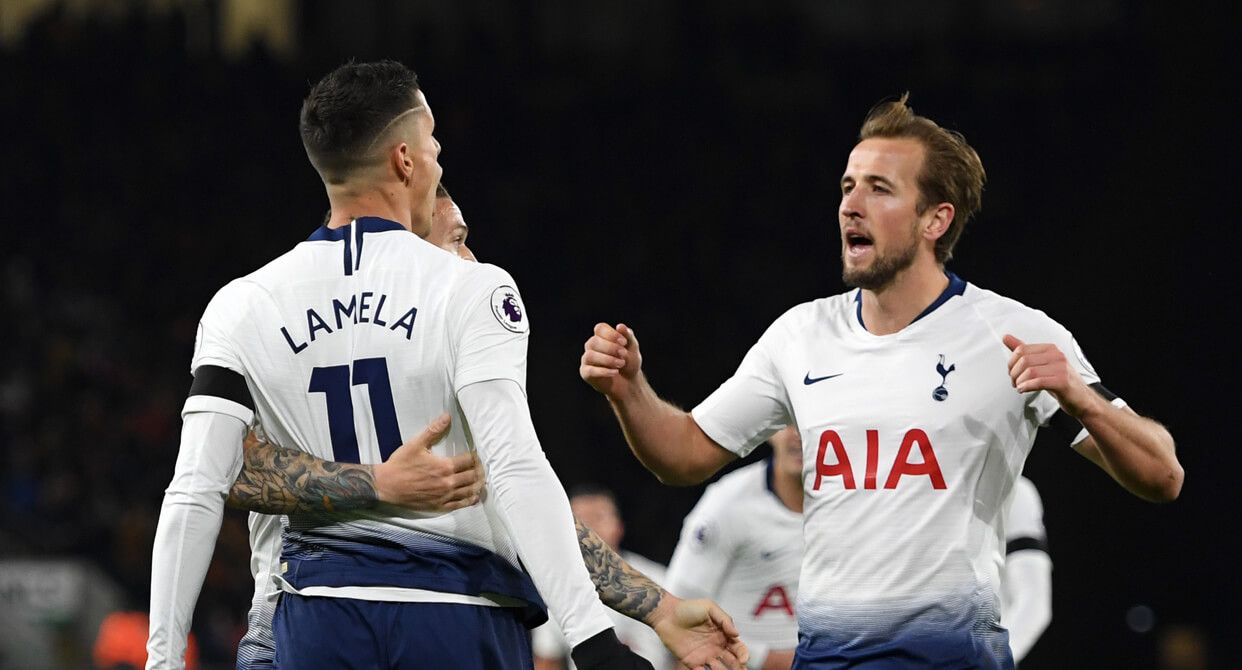 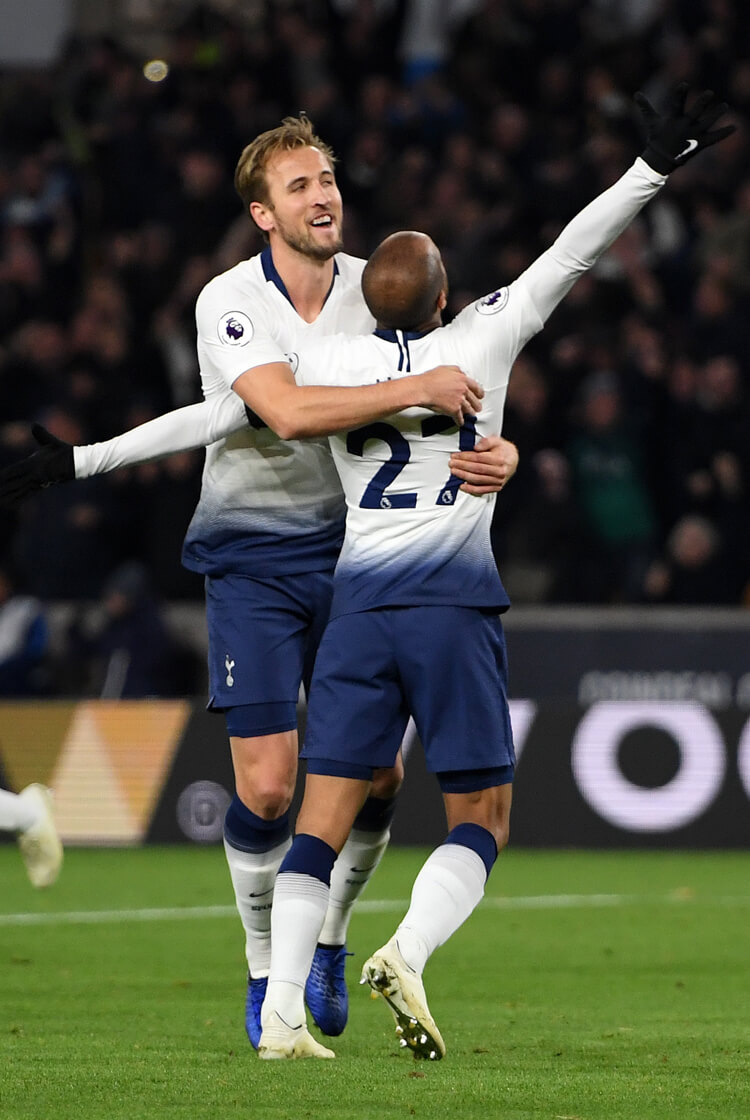 Tottenham survived a second-half fightback from Wolves at Molineux to hold on to three crucial points in the Premier League. Spurs were cruising to victory at the hour mark, with goals from Erik Lamela, Lucas Moura and Harry Kane putting Mauricio Pochettino’s team in full control. But two defensive errors from young centre-back Juan Foyth, making his Premier League debut, resulted in two penalties being awarded to the hosts. Ruben Neves and Raul Jimenez both delivered from the spot, and a point wouldn’t have been undeserved for Nuno Espirito Santo and his players – but they couldn’t find an equaliser and Spurs left with all three points. 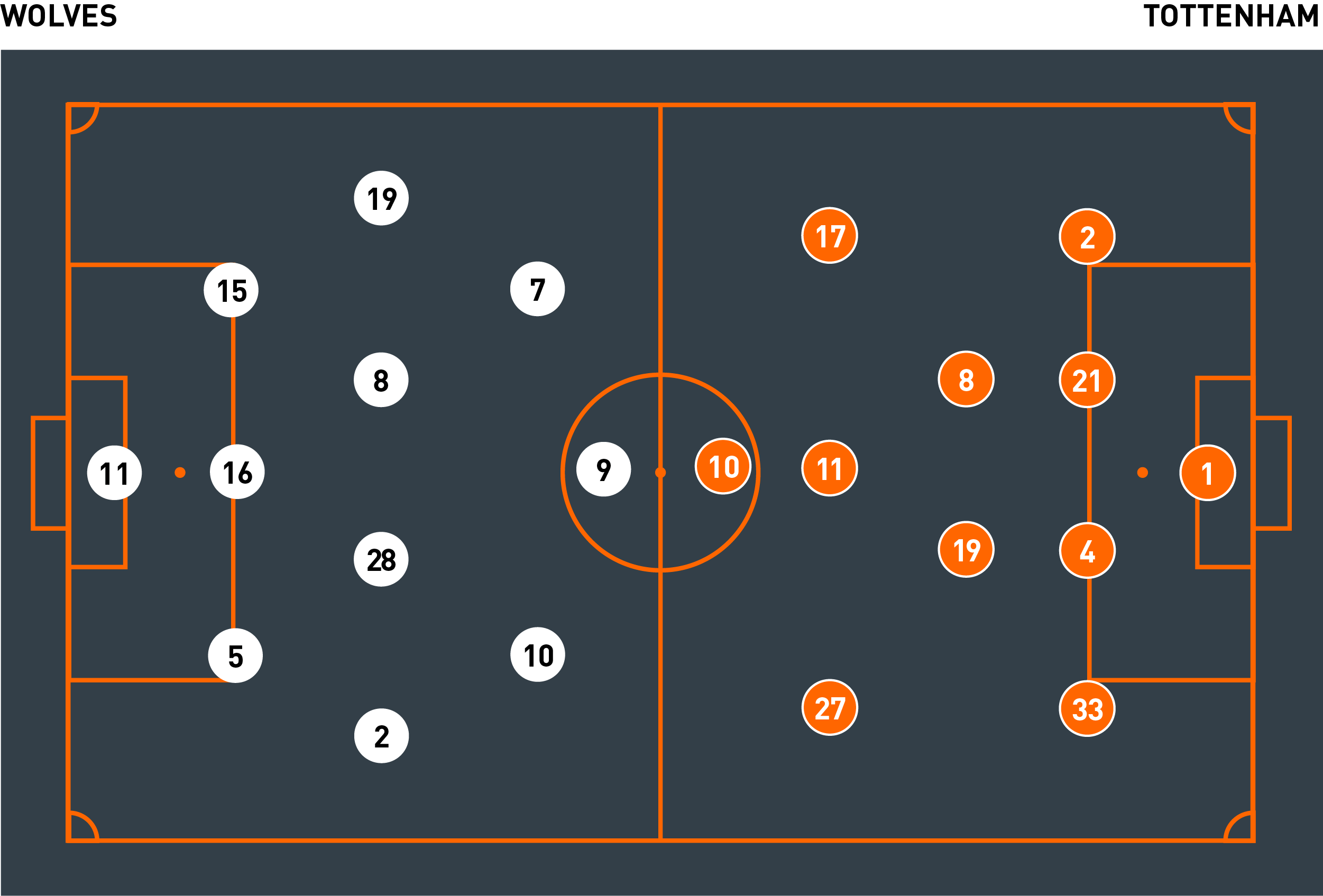 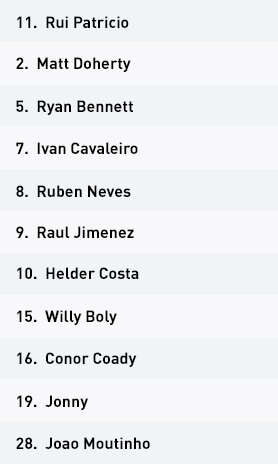 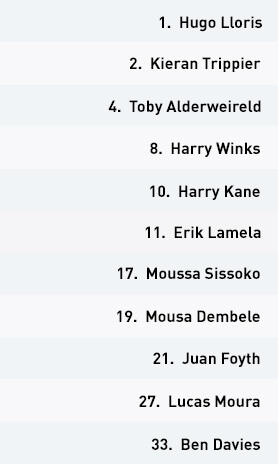 Wolves set up in their usual 3-4-3 formation, and their back three split very wide when in possession, with central midfielders Ruben Neves and Joao Moutinho dropping either side of Tottenham’s number 10 (usually Erik Lamela). As wing-backs Jonny and Matt Doherty provided the attacking width, the front three remained narrow; Spurs’ double pivot simply couldn't block all three players.

Tottenham’s furthest wide midfielder would remain narrow, helping to block the hosts’ access into their front three. This, though, created more space for the far-side wing-back, who could then be found through long aerial switches of play. But despite good early progress with the ball, Wolves failed to create chances on goal from subsequent crosses.

The hosts changed their attacking set-up as the front three began to spread, creating more width within their front line. From here, the far-side wing-back would step inside, re-establishing a central presence around the sides of Spurs’ double pivot. Despite going two goals down, they made good use of their attacking width and were unfortunate to see a goal incorrectly ruled out for offside. Doherty latched on to a switch from deep and combined with Jimenez, but the latter was incorrectly adjudged to have been offside from his run in behind.

Wolves reverted to their original plan in the second half. Both wing-backs pushed high, as Tottenham’s wide midfielders failed to consistently recover back. The front three again narrowed, occupying the entire Spurs back line. Diagonal runs inside with the ball from the wing-backs enabled Ivan Cavaleiro and Helder Costa to run outside the visitors’ full-backs, moving into good crossing positions. But despite a mixed variety of low and high crosses, they couldn’t find their attacking runners, with a low Neves drive from the edge of the box their best effort.

They did grab two goals back in the second half – both from penalties conceded by Juan Foyth. In between the two spot-kicks, Wolves had another great chance, as runs in behind from the narrow front line caused Spurs’ back line issues. Costa was sent through one on one but poked his effort just wide.

Out of possession, Wolves converted from a 3-4-3 to a 5-4-1 mid-block. They struggled in particular to contain the rotations of Lucas Moura and Erik Lamela, as Spurs positioned three players behind the hosts’ central midfield duo, thereby preventing Neves and Moutinho from stepping higher to press. As Moussa Sissoko dropped out into a false full-back role, winger Ivan Cavaleiro was pulled away, increasing the space in which Kieran Trippier could attack left wing-back Jonny. They conceded two goals from this area.

When they adapted their attacking structure in using their forwards to provide the attacking width, they became more adept at dealing with Tottenham’s inside rotations. As their wing-backs were now inside, the central lane became extremely compact, and Spurs were unable to penetrate such a congested area. What’s more, with the Wolves wingers attacking right against the touchlines, the visitors’ full-backs were pegged further back, reducing their impact going forward.

Despite starting the second half the stronger side, they went three goals down. Going man-for-man at goal-kicks proved costly, as Harry Kane and Lamela capitalised to win the first and second balls before the former punished Wolves with what turned into a crucial third goal.

Tottenham started in a 4-2-3-1 formation, with Moussa Sissoko and Lucas Moura starting in wide attacking roles and Erik Lamela in the number 10 role behind Harry Kane. After central midfielder Mousa Dembele was forced off injured in the opening exchanges, Sissoko dropped back and into a false full-back role on the right side, pushing Kieran Trippier higher in the wide area.

Spurs’ most promising spell with the ball finally came through inside movements from Moura, who moved over to the right, with substitue Son Heung-min operating wide on the left. His movement not only allowed Trippier to overlap on the right but created a three-on-two against Wolves’ central midfield duo with Kane and Lamela.

After the hosts had tracked Spurs’ right-sided movements, Lamela and Moura swapped positions. Lamela would then step inside from the right, with Moura bursting away from the central lane to his previous position – this simple rotation and its impeccable timing caused Wolves numerous problems. Moura’s flexibility within the central lane also helped Spurs build on their left side, where Son and Ben Davies had made little progress.

With Moura now moving across to the left, enhanced spaces were created on the right. Lamela had started to combine well with Trippier and Son, with the latter beginning to rotate inside too. They grabbed two quickfire goals from here, as Lamela fired the first in from a tight angle, before Moura headed in a second from a Trippier cross. Both goals stemmed from Moura and Son rotating on the left, with Tottenham then finding Trippier in enhanced space to combine and deliver into the penalty area.

The visitors’ attacking play was soon reduced, however, as both full-backs were pegged deeper by the increasingly aggressive positioning of their opponents’ wide attackers. Spurs couldn't establish spells of possession in the second half and started to focus their efforts on hitting Kane on the break.

Poor passes forward gave the England international little chance of securing the ball against three centre-backs, though. Even if these passes were delivered more accurately, a lack of supporting runners ensured possession couldn’t be sustained. Lamela, Son and Moura’s second-half input was limited, both in and out of possession. Pochettino eventually replaced Son with Christian Eriksen, hoping to create sustained spells with the ball.

Eriksen’s presence in central midfield allowed for a more secure link from defence to midfield. They went three ahead after a long kick from goalkeeper Hugo Lloris was flicked on by Kane. Lamela dug out a cross, and Kane buried the rebound after his first effort was parried by Rui Patricio. Despite this, Wolves almost came back to earn a point, as Spurs failed to assert themselves in the second period.

Out of possession, Tottenham maintained their 4-2-3-1 shape, but initially found it difficult to block Wolves’ central access into their forwards. Their double pivot struggled against a narrow front three, and one of the wide midfielders was forced to drop back to help – this only created more space in the wide areas for the hosts to attack through their wing-backs.

Wolves reacted to going two goals down with a strong spell towards the interval, where they re-established their direct switches across the field. With the hosts’ front line now providing the width, and their wing-backs stepping inside, both of Tottenham’s full-backs entered a period of one-on-one duels against the wingers.

As Tottenham’s double pivot now only had Raul Jimenez to block off, Harry Winks and Sissoko began to step higher, conscious of the potential threat of inside wing-backs Doherty and Jonny. This created more space between the defence and midfield, as the wingers could now beat Spurs’ full-backs around the outside or by cutting inside into larger central spaces.

Wolves continued to create the better chances, as they aggressively sent both wing-backs high in the second half. Neither Lamela nor Moura tracked these forward runs; Wolves’ wing-backs often had a free run against Trippier and Davies, which contributed to the hosts’ two second-half goals.