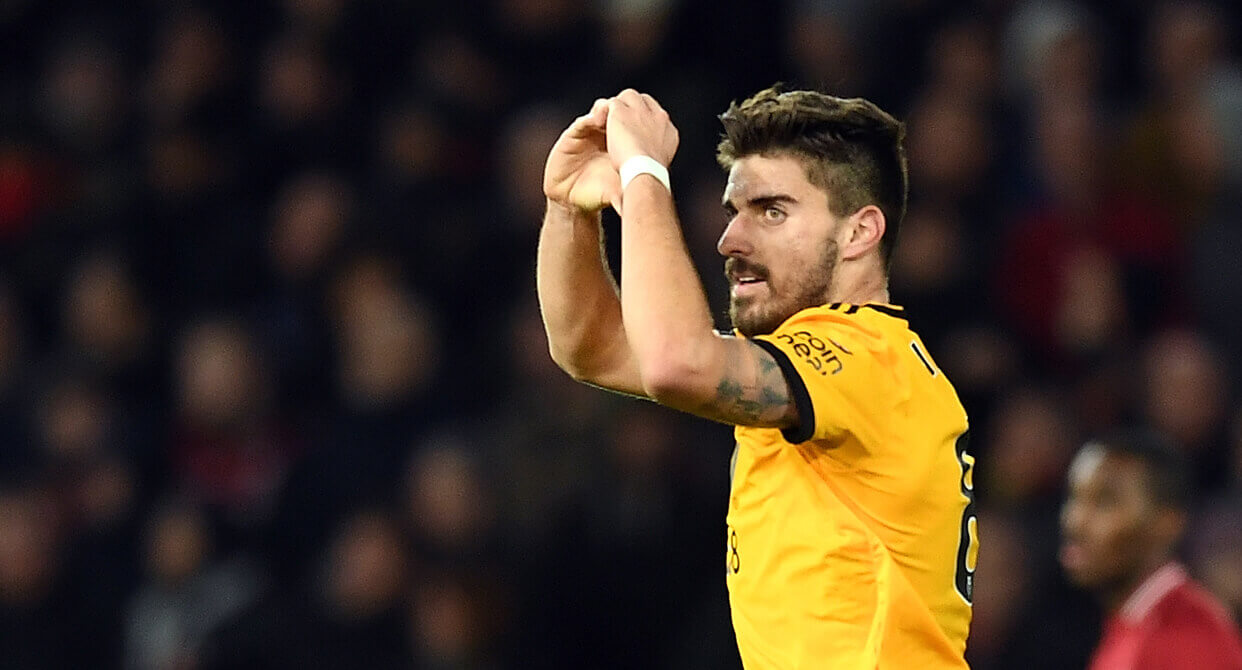 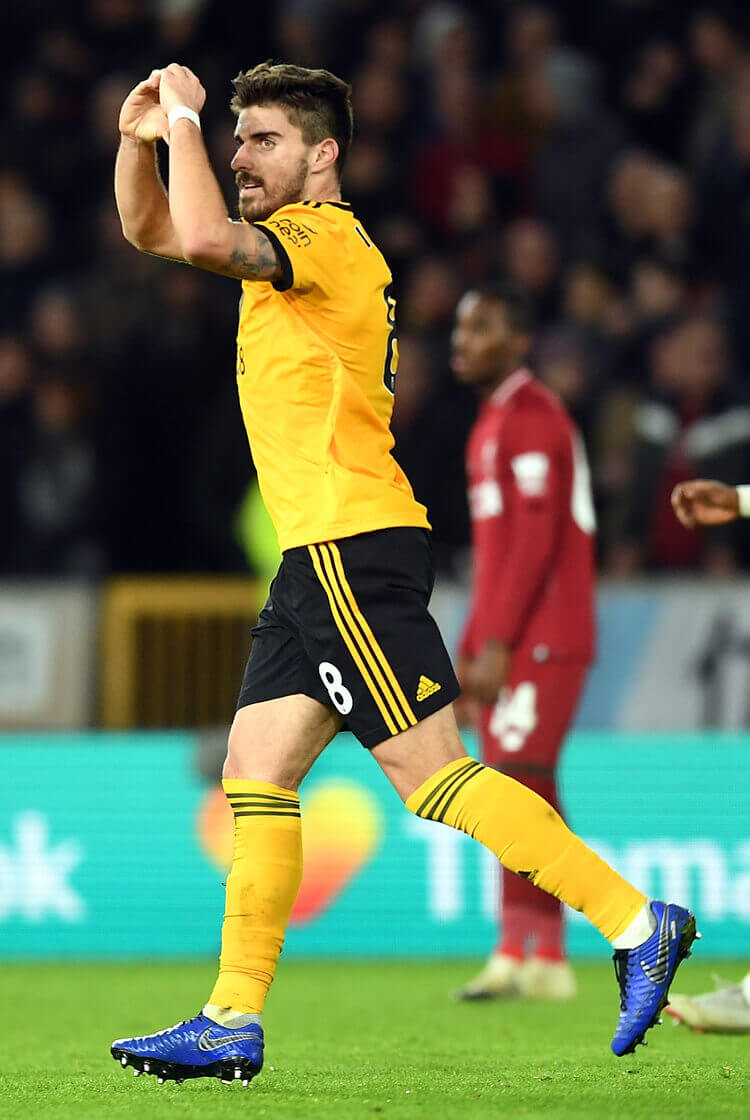 Liverpool fell to another early FA Cup exit under Jurgen Klopp, as an under-strength Reds side went down to Wolves at Molineux. The German head coach made a number of changes to the team that lost at Manchester City four days earlier, handing first-team debuts to 18-year-old Rafael Camacho at right-back and 17-year-old left-sided attacker Curtis Jones – and within minutes of kick-off 16-year-old Ki-Jana Hoever had replaced the stricken Dejan Lovren at the heart of a defence already featuring midfielder Fabinho. In a poor game, it was Wolves who took the lead – James Milner was caught in possession and unable to recover as Raul Jimenez broke through to finish past Simon Mignolet. Divock Origi showed a rare glimpse of quality to hammer home an equaliser early in the second half, but an equally impressive strike from Ruben Neves restored a lead his team never relinquished. Wolves progress into the fourth round, while Liverpool are left to focus entirely on their Premier and Champions League challenges. 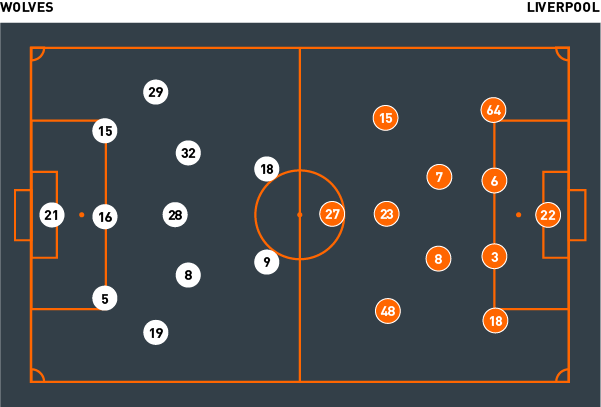 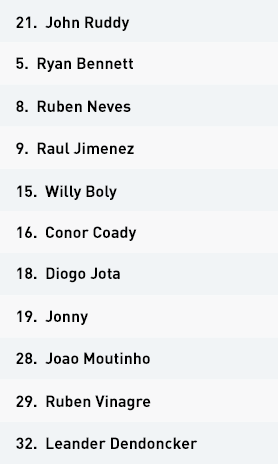 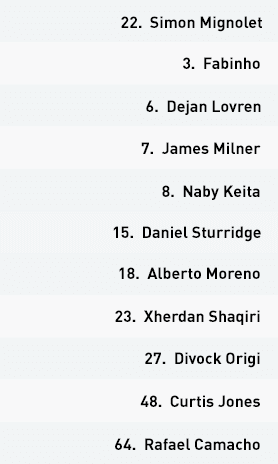 Nuno Espirito Santo set his Wolves team up in a 3-5-2 formation, with Diogo Jota supporting Raul Jimenez in attacking areas. As Liverpool dominated the early possession, however, the hosts were forced to prioritise moments of transition, sending direct balls into Jimenez or in behind the full-backs for the more mobile Jota to latch on to. A lack of supporting runners often meant they struggled to penetrate the final third, however.

Should Wolves regain possession in Liverpool’s half, or high in their own, then Jota’s new positioning between Liverpool’s youngsters in the back line – the injured Dejan Lovren was replaced early by 16-year-old Ki-Jana Hoever – soon became the most effective forward passing option. Liverpool right-back Rafael Camacho was often too keen on man-marking left wing-back Ruben Vinagre, which increased the space for Jota to receive one-on-one against Hoever. Wolves could now build their transitions more effectively, with Jota afforded more time on the ball, to let supporting runners join the attack.

Hoever worked to get tighter on to Jota, who in response dropped towards the ball within the inside channel. As Liverpool squeezed up to press the forward as he received, this acted as the trigger for blindside forward runs from Vinagre on the left. Despite both the passes and Vinagre’s runs being well-timed, Wolves couldn’t quite connect with their final balls in the attacking third.

It was as a result of the Wolves forwards dropping deeper in a mid-block that the hosts took the lead late in the first half. The front pair could now help Joao Moutinho in pressing Liverpool’s deepest midfielder, James Milner, whose loss of possession from a poor Alberto Moreno pass saw Jimenez skip clear of a last-ditch Fabinho tackle and drive calmly past Simon Mignolet.

As the game moved into the second half, more spaces appeared across Liverpool’s more attacking midfield stucture. The hosts made good use of switches of play, and always had maximum width from the positioning of their wing-backs. With Liverpool’s midfield now horizontally stretched for the first time in the game, central midfielder Ruben Neves had time and space to hit a trademark shot from distance to restore Wolves’ lead. The hosts occasionally posed a threat from counter-attacks, but they prioritised holding on to their lead and making the fourth round of the FA Cup.

Out of possession, Wolves initially set up in 5-3-2 mid-block, with both central forwards moving on to Liverpool’s centre-backs. With Milner dropping back to form a three-against-two overload, the visitors dominated possession until the hosts pushed their front line much higher to mark their opponents on the edge of the Liverpool area. This forced Mignolet into more direct balls forward, which a physical Wolves defence were able to deal with comfortably – although the midfield trio of Moutinho, Neves and Leander Dendoncker were at times unable to match the intensity of Liverpool’s midfield in regaining second balls.

The momentum of the game changed late in the first half, when Wolves moved back into the deeper mid-block mentioned above and their forwards dropped on to Milner rather than the Liverpool centre-backs. This led to the game’s opening goal and, despite Liverpool’s equaliser early in the second half, the swiftness of Neves’ strike enabled them to drop into the consistent low block from which they saw the game out.

Liverpool began the match in a 4-2-3-1 structure, with James Milner dropping in between the two centre-backs and Naby Keita – his partner in a supposed double pivot – remaining slightly higher. This helped Jurgen Klopp’s men create an early overload against Wolves’ two forwards. Both full-backs also moved higher into the next line, with Curtis Jones and Daniel Sturridge usually stepping forward to join Divock Origi and Xherdan Shaqiri playing in an advanced central midfield role. To begin with, then, the Reds often resembled a 3-4-3 on the ball – and as the Wolves midfield trio struggled to both block the central channel and mark their opponents, Keita in particular was able to use his direct dribbling style to exploit any spaces in the middle.

Liverpool’s central progress and overall penetration dropped as Wolves stepped much higher when defending. Milner, Keita and Shaqiri were impressively alert to any second balls that came about from Simon Mignolet’s more direct distribution, but with Shaqiri in particular dropping short or inside to support the build, Liverpool lacked an attacking presence on the right. This enabled Wolves to shift across and deal more easily with any trickery from Curtis Jones on the left; the young attacker showed his potential in brief cameos, but was often double-marked and lacked intelligent supporting movements from the disappointing Alberto Moreno behind him.

Even as Wolves moved back into a defensive mid-block, Liverpool’s play lacked penetration. Milner found himself overcrowded on the ball, but with Shaqiri, Sturridge and Origi all dropping back, the central lane became too busy. This gave Keita precious little room in which to operate, while also reducing the Reds’ numbers in advanced areas.

Liverpool eventually progressed into a more attack-minded 4-3-3 structure, with Shaqiri and Keita occupying the spaces around Wolves’ central midfield trio, in the inside channels. Sturridge became the central striker, with Origi supporting from the right. The latter soon struck a superb equaliser, but Wolves went ahead again within minutes and the Reds were unable to fight back once more. Shaqiri’s long range free-kick hit the post, while even the twin introductions of Mo Salah and Roberto Firmino couldn’t break down Wolves’ defensive block as Liverpool suffered another early FA Cup exit under Klopp.


Out of possession, Liverpool formed a compact 4-1-4-1 structure, with Milner often deeper than Keita, blocking access into Wolves’ two central forwards. As the likes of Shaqiri, Sturridge and Jones often rotated inside or towards the ball to help create overloads against Wolves’ man-marking strategy, Liverpool’s midfield unit was very narrow during moments of transition. From here, Wolves’ wing-backs were free to make more forward runs.

The home side were only really dangerous during moments of transition, where they targeted Liverpool’s right side. Young defenders Rafael Camacho and Ki-Jana Hoever couldn’t quite establish a consistent distance between themselves, to stop splitting forward passes. With Shaqiri moving inside, Camacho was unsure how tightly to mark Ruben Vinagre. This inexperience allowed Wolves to penetrate with early passes through or over the young pairing, although they stuck to their task admirably throughout – ironically, it was the vastly more experienced Milner whose loss of possession led to the first goal.

When Liverpool moved into a more attacking 4-3-3 structure, the game became far more stretched, with more space to hit longer passes and switches of play. Wolves then made use of their wing-backs, which forced Liverpool’s full-backs to recover more quickly and in turn hindered their attacking play. In the end, it was through a number of switches that Wolves eventually worked the time and space for Ruben Neves to hit the goal that knocked the seven-time FA Cup winners out of this year’s competition.