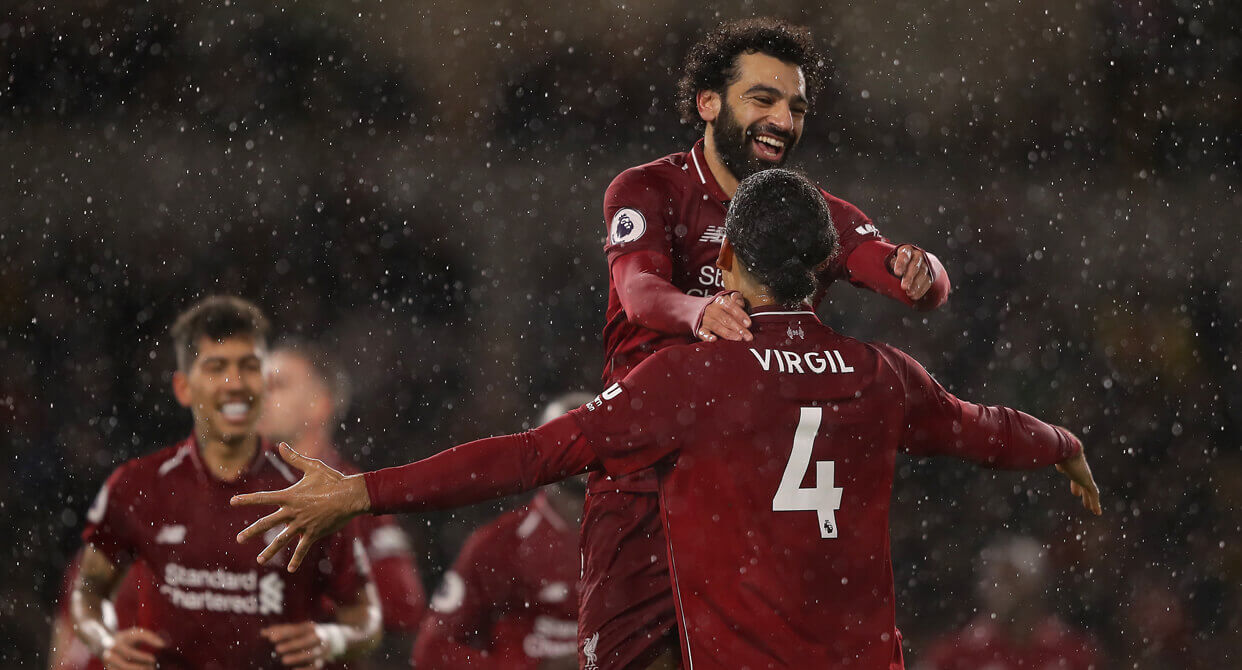 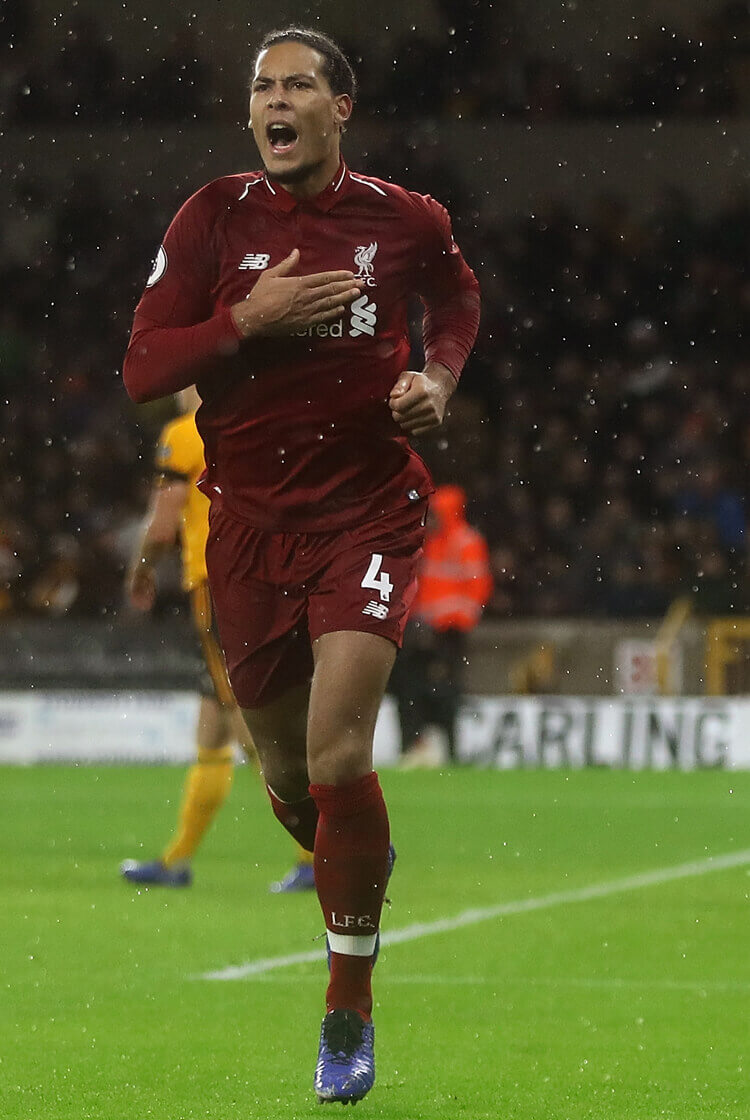 Liverpool guaranteed they would sit top of the Premier League going into Christmas with a clinical performance against Wolves on a rainy Friday night at Molineux. Nuno Espirito Santo’s side had already taken points from Manchester City, Arsenal, Chelsea and Manchester United this season, and in a spirited first-half display they created a number of chances to test Alisson in the Reds’ goal. That didn’t stop them from falling behind, however, as the impressive Fabinho combined with Sadio Mane before crossing for Mo Salah to flick deftly past Rui Patricio after 18 minutes. Liverpool worked hard to protect their lead, which they extended midway through the second half when Salah turned provider for Virgil van Dijk to volley classily home for his first Premier League goal for the club. Job done for Jurgen Klopp, whose weekend got even better with shock home defeats for Manchester City and Chelsea within 24 hours. 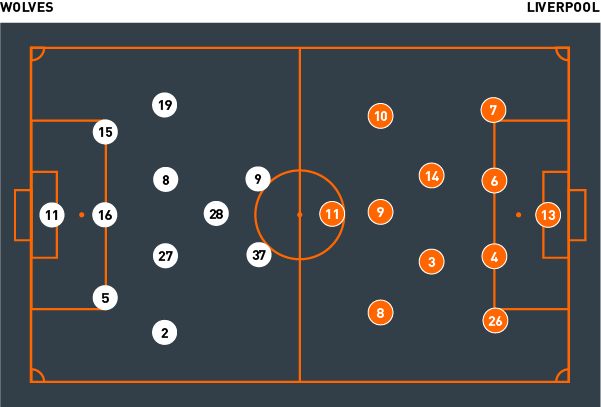 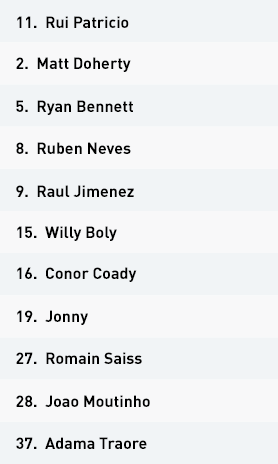 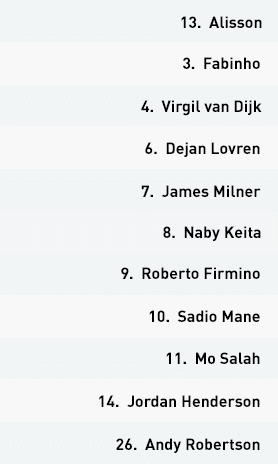 Nuno Espirito Santo set Wolves up in a variation of a 3-2-3-2/3-4-1-2 formation, which was dependent on how high wing-backs Matt Doherty and Jonny played. Romain Saiss and Ruben Neves played in front of the back three, while Joao Moutinho played in a more advanced role just behind forwards Raul Jimenez and Adama Traore.

Wolves were limited to just 39 per cent possession through the game, but they tried to attack in a couple of different ways. One was to utilise the positioning of their wing-backs to draw Liverpool full-backs James Milner or Andy Robertson out and create bigger spaces between the Liverpool defenders. One of their deeper players or forwards could then make penetrative runs through those gaps and in on Alisson in the Liverpool goal.

Alternatively, and this was largely forced upon them as a result of Liverpool’s high press, they would send the ball directly from the defenders to the forwards and aim to win the second ball – but this led to extremely limited success. Wolves did try to play out from the back, but they found their back three matched up and passes into their two central midfielders heavily screened. Doherty and Jonny were also under close attention from Robertson and Milner – the result was that Wolves could never work an overload and thus playing out became more risky than was comfortable for them.

Out of possession, the hosts operated in a 5-2-3 shape, with Moutinho joining Traore and Jimenez on the top line while Jonny and Doherty tucked in alongside the back three to create a defensive line of five. Wolves tried to press Liverpool, with Jimenez and Traore closing down Virgil van Dijk and Dejan Lovren; Moutinho played between Fabinho and Jordan Henderson and tried to affect both, but this proved difficult and Liverpool often just played around him.

As Liverpool regularly dropped players deep and the Wolves wing-backs weren’t keen to push high up the pitch, the hosts often found themselves with a back line of five defending against only two Liverpool players – which was secure but inefficient. The knock-on effect was that Liverpool were able to create small overloads in earlier phases of the Wolves press, and thus progress up towards goal comfortably. The hosts never really adjusted their press to improve efficiency, and so were regularly played through.

Wolves’ other defensive strategy was to defend in a mid-block and force Liverpool backwards and sideways while waiting for them to make a mistake. The difference in Moutinho’s role here was that he formed part of the front three in the mid-block rather than trying to affect Fabinho and Henderson in the higher press. In either shape, however, the hosts struggled to consistently put enough pressure on a Liverpool side that are looking stronger by the week.

Jurgen Klopp set his Liverpool team up in a 4-2-3-1 formation, with Jordan Henderson and Fabinho playing in front of the back four while Sadio Mane, Roberto Firmino and Naby Keita operated just behind lone forward Mo Salah.

The Reds looked to overload Wolves in the defensive and midfield thirds when building, and managed to achieve this regularly through dropping players from higher lines into deeper positions. In the early phases this would feature full-backs Andy Robertson and James Milner joining the two centre-backs against the Wolves top three of Raul Jimenez, Adama Traore and Joao Moutinho. Once this line was bypassed, the full-backs would move up into midfield against Ruben Neves, Romain Saiss and the wing-backs, with an overload created by Salah or Firmino dropping deeper.

Liverpool played into feet often, with their players receiving with their back to goal. This created several opportunities to either play around the corner early or set the ball and play a penetrative pass for a third-man run. This was a strategy they used regularly throughout the game, and was often combined with a switch of play. They looked to build on one side of the pitch, drawing opposition numbers over to that side before switching through sharp passing across to the other flank.

Out of possession, Liverpool pressed in a 4-2-3-1 structure and would look to force Wolves into long, inaccurate passes through high pressure as well as trying to shut off the middle of the pitch. Salah would lead the press and show the ball-carrier outside, with Keita and Mane crucial to preventing Wolves from playing through. The two wide attackers would position themselves half and half between the deeper central midfielders and Wolves’ outside centre-backs, in a position to affect both should they receive.

As the ball travelled to Willy Boly or Ryan Bennett, Mane or Keita would go to press while trying to screen the ball in to Saiss or Neves; Firmino would drop back to mark the nearest central midfielder and add extra security should Mane or Keita not provide a sufficient screen. Henderson would stay with Joao Moutinho, while Milner and Robertson were happy to track Jonny and Doherty as far as necessary. This left van Dijk and Lovren against Traore and Jimenez, with the former winning most of the aerial duels when the ball came long – it was the Dutch captain’s first league goal for Liverpool at the other end of the pitch that secured the three points that guaranteed the Reds top spot at Christmas.